"The best way to predict the future is to invent it," said computer scientist Alan Kay. It would appear Solace Boat's Stephen and Sarah Dougherty and their talented team guided by president Todd Albrecht, took that advice to heart. The fresh face and outside-the-box boat-builder in the booming luxury center console camp, Solace is the one making the competition reflect back asking: Why didn't we think of that? And not just once, but over and over!

If I wrote this story last year when originally planned, 2,000 words of me gushing over the Solace 345 Fish-Thru transom that turned the fishing world into a fury would have followed, but  hooray for the delay. Thanks to my tardiness, today I can relay Solace has again rewrote history with a repeat revolutionary Fort Lauderdale show release for 2020.

The flagship answers to the name 41CS and comes equally embellished in innovation from bow to stern and beyond... but before diving into the soul of the Solaces in part two of the feature under Center Console Profiles, founder and president Stephen Dougherty (of Everglades acclaim), must first be recognized for his brilliant  boat building. I had the opportunity to sit with the Massachusetts native, born with sea salt in his veins, at opening day of the Palm Beach International Boat Show. My goal was to do some brain-picking into the background and conceptualization of his nautical visions and achievements – and get a better handle on what is The Dougherty Difference. 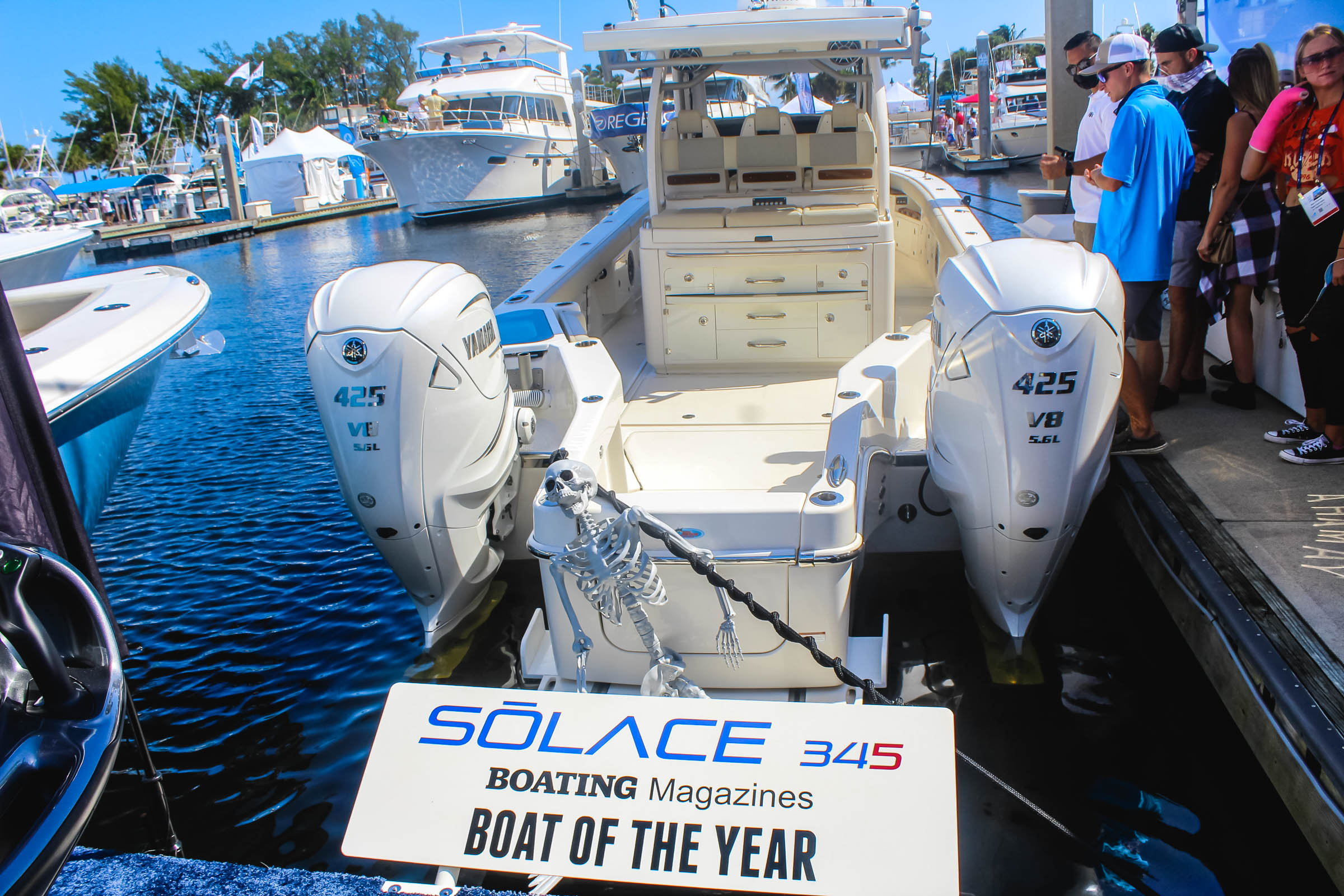 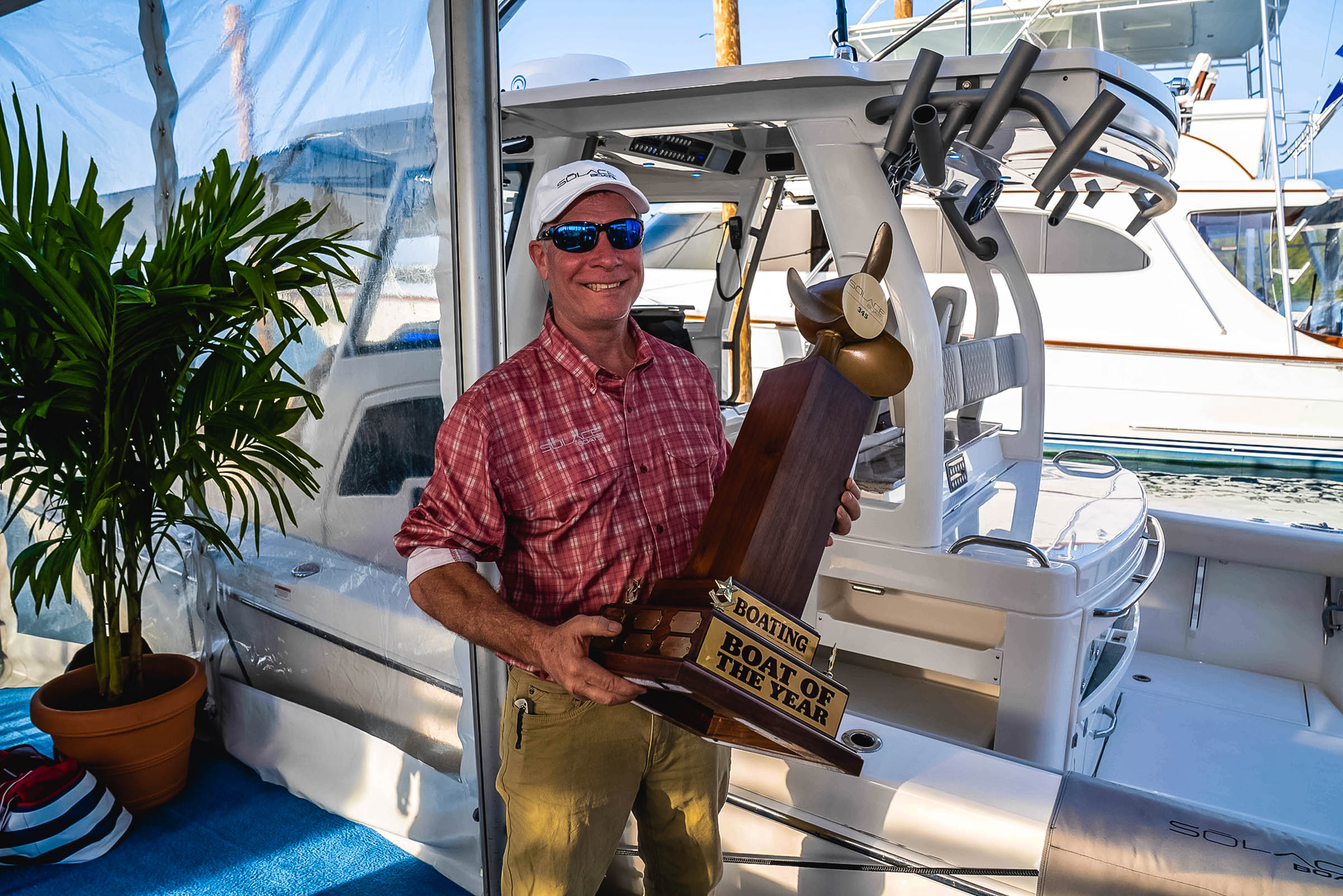 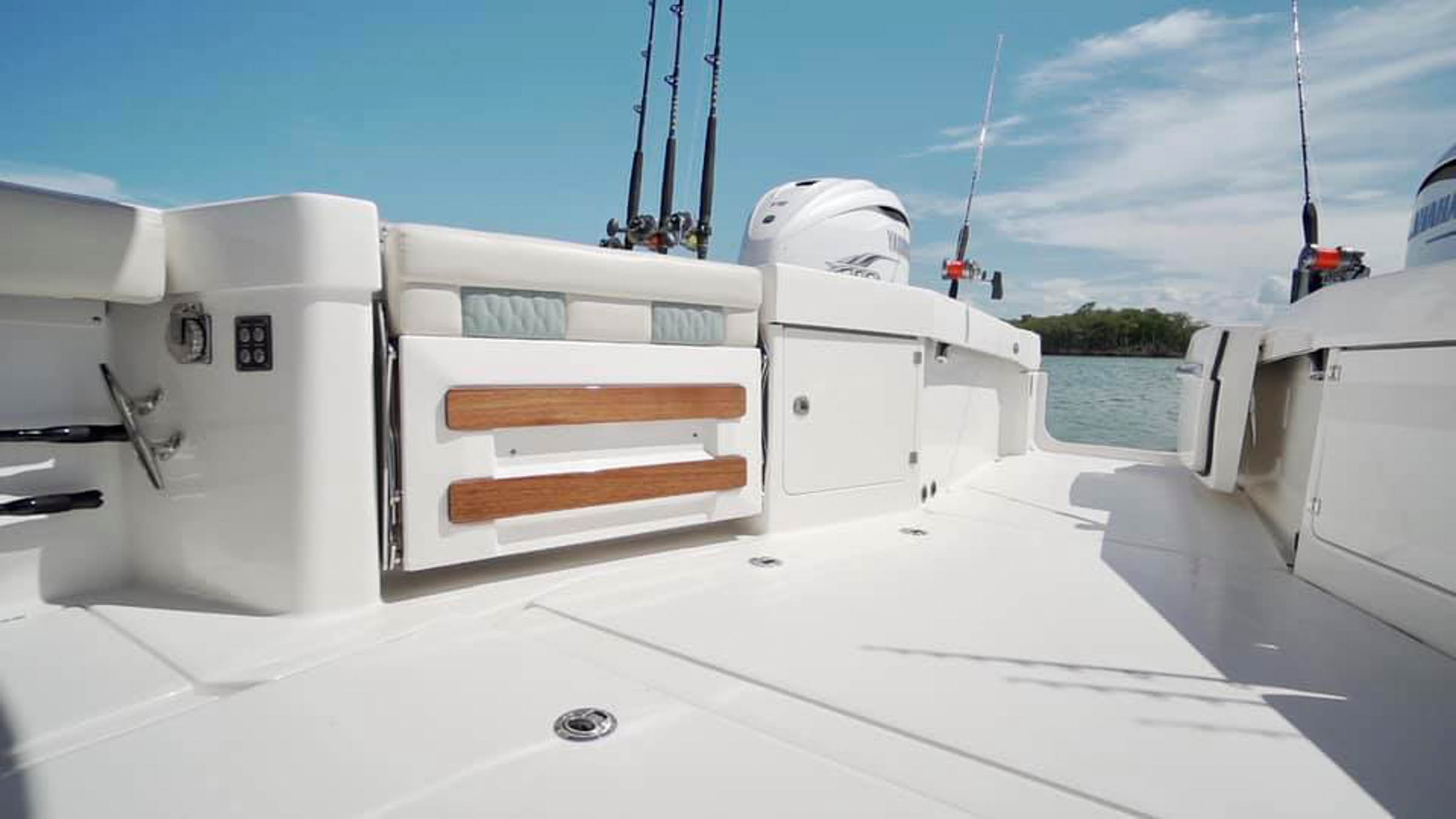 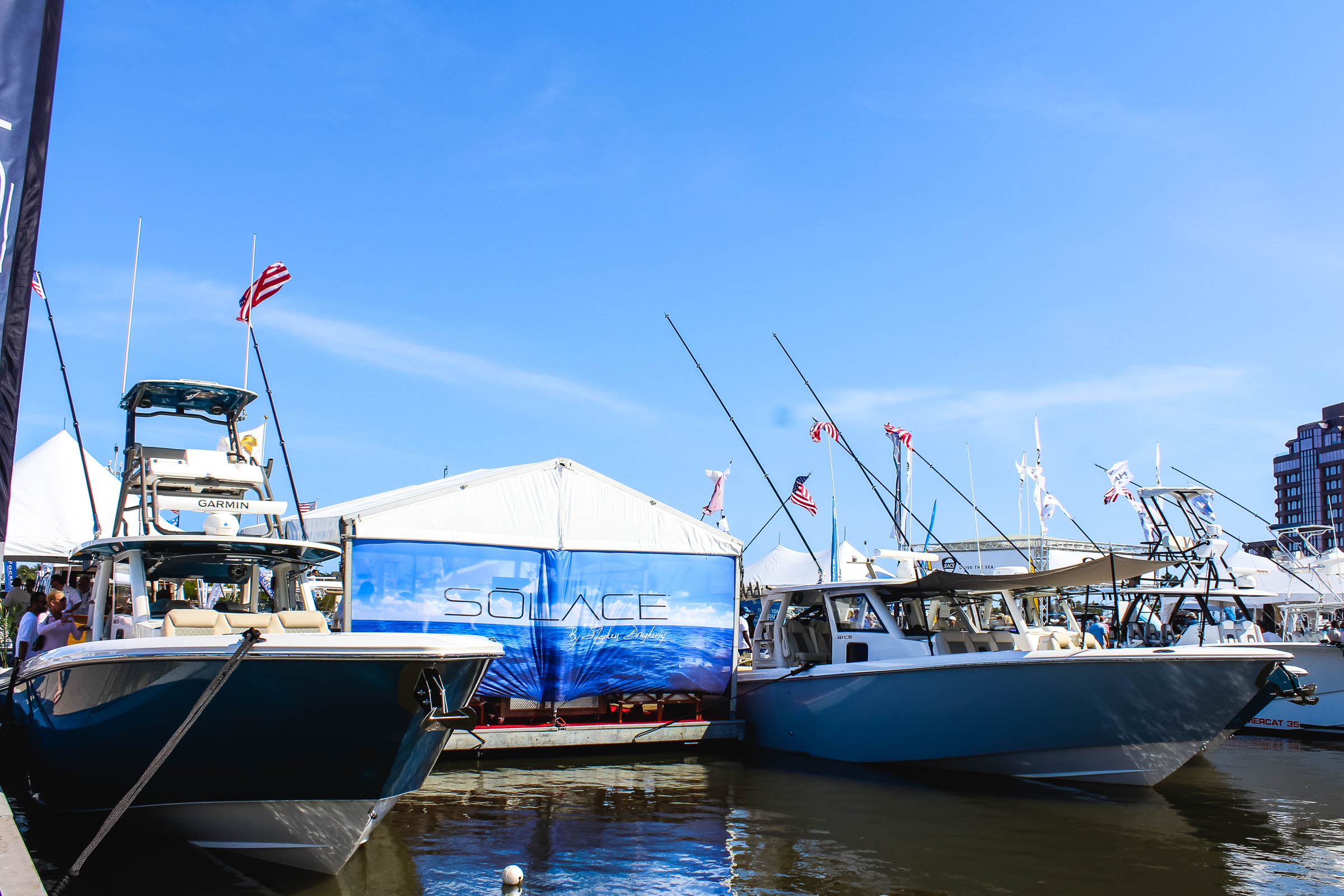 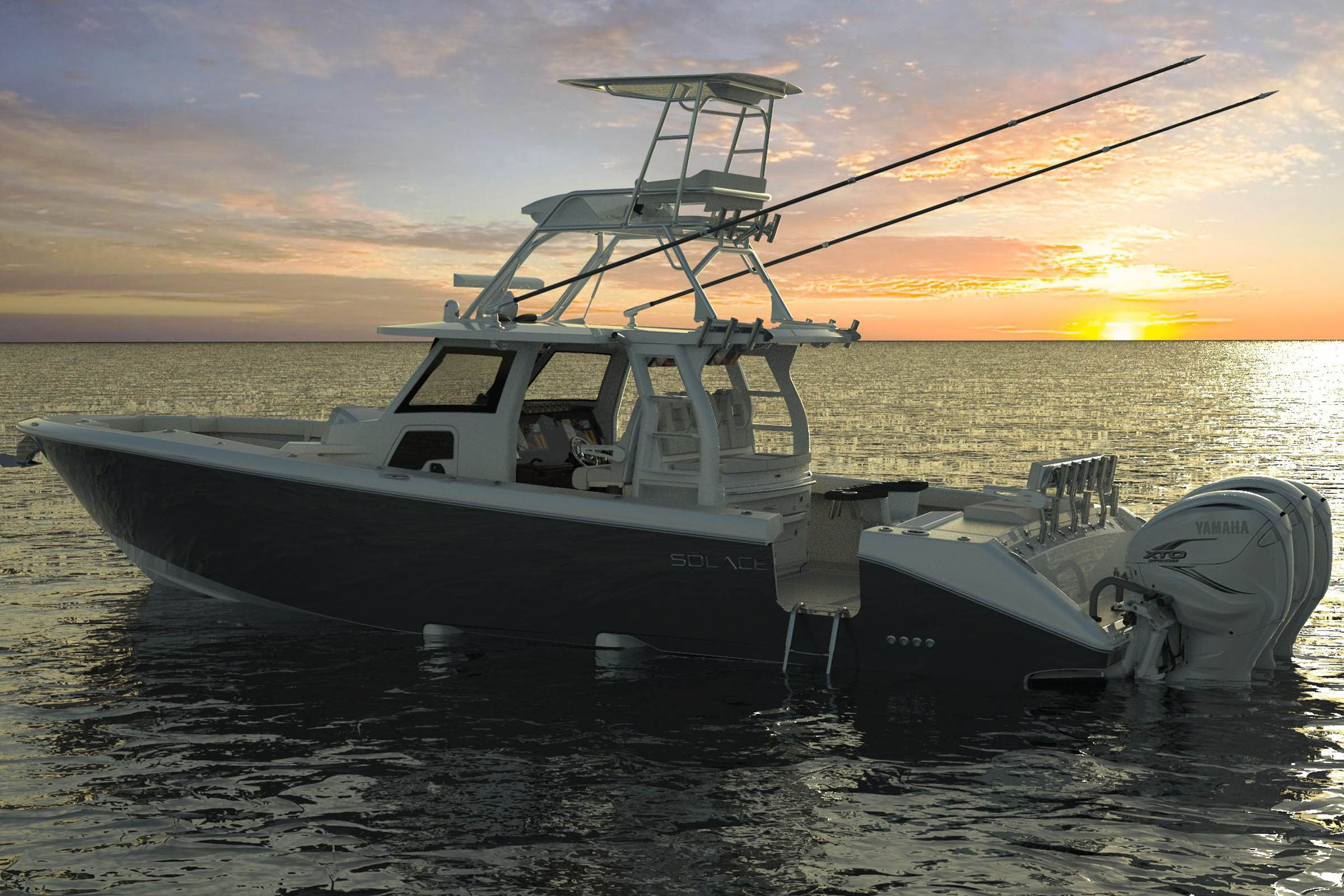 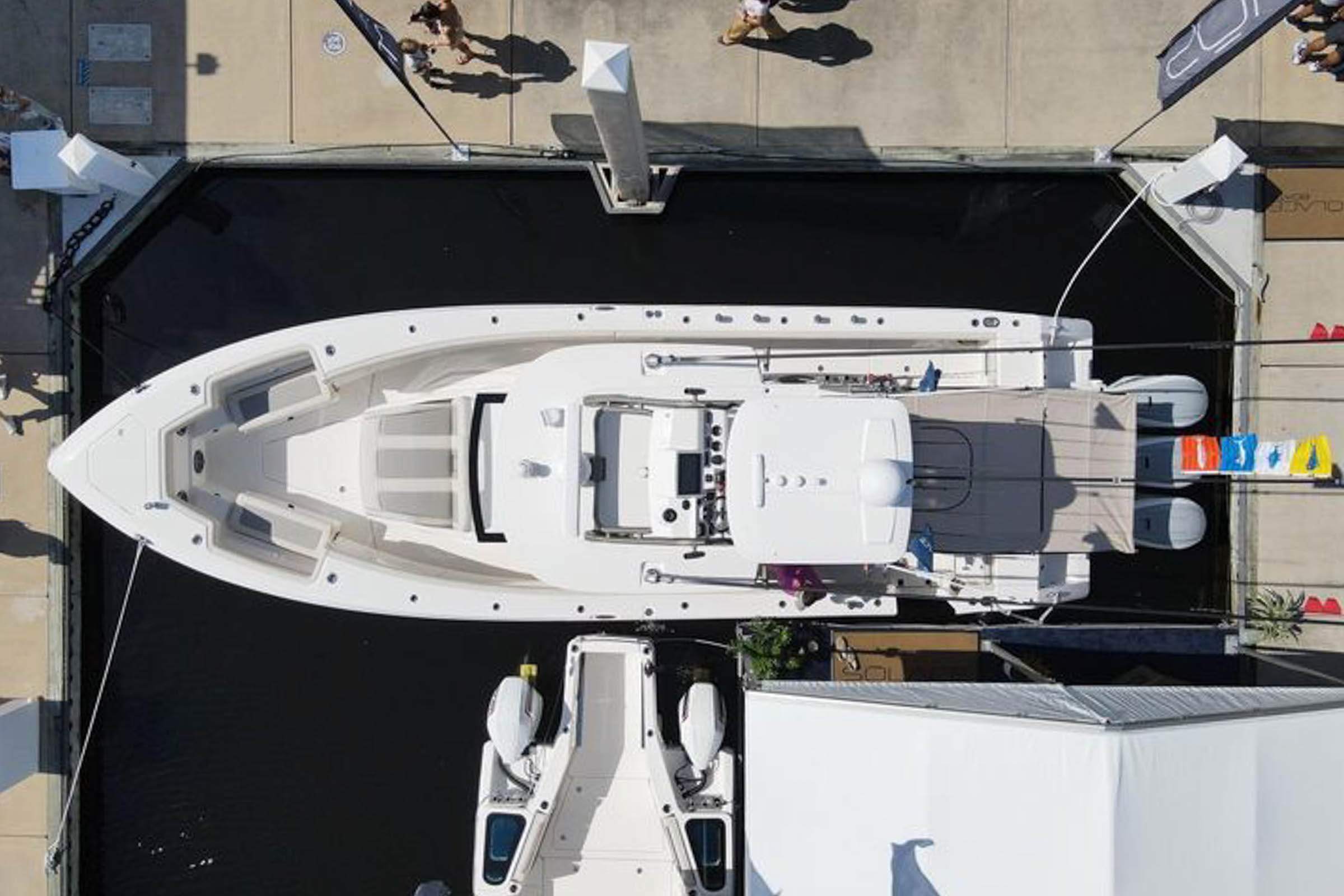 It would seem "brainchild" is a fitting title for Dougherty since he picked up his cutting edge, not cutting corners “brainy” philosophy, and foundation for resourcefulness as a “child" during weekend play-dates. But, those long-time-ago Saturdays weren’t spent linking Legos and slinging Play-Doh. The place to find little Stephen was at the Boston Whaler pattern shop hanging out with the big boys. After all, his late father Bob Dougherty – nicknamed "Mr. Unsinkable" for his uncompromising modus operandi in watercraft construction – was the former senior vice president and chief designer of the popular boat company.

Another of Dougherty's equally thrilling and most definitely more chilling pastimes was wintertime boat testing with his pop. "It was one of my favorite things to do. We had a cottage on the South River in Massachusetts. Sometimes it would be snowing and we'd be out there chopping ice at the ramp just to get the boats in," recalled Dougherty. Spending his childhood years in an oceangoing environment surrounded by nurturing and assiduous mentors clearly fostered his ingenuity and speaks volumes about Dougherty's undaunted confidence.

In his own words, the biggest take away from his marine industry pioneer dad and what defines the Dougherty Difference is this, "It was my father's integrity. He always said, 'There are two ways, either we build a regular boat and spend a lot on marketing, or we build something badass that sells itself.' Dougherty continued with, "We had to build the best there was, every square inch of the boat had to be better than every square inch of any other boat. And to this day that's how we operate at Solace and what you can expect when we say the Dougherty Difference."

After soaking up his father's skills like a sea sponge over the years, Dougherty’s path of American boat-building excellence also traces back to Boston Whaler. As an adult, he walked through the door not only as Bob's son but as an official employee at the original site. That is until, the entire family followed Boston Whaler down south after the manufacturing industry up north began to tumble. Edgewater, Florida, became home and upon relocation Dougherty was tasked with training the locals on how to assemble Boston Whalers.

Following the transition southbound, in due time corporate pressure putting limitations on new developments pushed the father and son to go their own way. Not only did they relocate to Edgewater, the duo also founded EdgeWater Powerboats. However, teaming up with partners in the sailboat industry with a different perspective led to an eventual stock buyout... but more importantly, paved the way for introducing their new company Everglades Boats. Business really took off with Everglades and the Doughertys were finally free to design boats their way, especially by using Bob's ground-breaking Rapid Molded Core Assembly Process. The method created the lightest weight and most durable hard top, and in 1999 earned the Marine Manufacturers Innovation Award.

Putting achievements aside, like many businesses that endured the global economic crisis of 2008, on the back end of the collapse the family agreed that should an opportunity present itself, they’d consider selling. And that it did! Everglades was sold in 2012 and while Dougherty went along with the decision fueled by his elderly father, deep down this heart told him, "building boats is not over for me." Dougherty's joie de vivre was to raise his young family as avid boaters the same way he was, not to mention, his God-given talent was pushing the boundaries of boat building.

When Everglades Boats sold, Dougherty diligently negotiated a three year non-compete and this gave him just the right amount of time to get the ball rolling with Solace. And roll it did! Operations for his new venture opened in a 30,000-square-foot building, and within a year the business had outgrown the original location and moved into a 200,000-square-foot space. The immense new Solace facility was geared up to do it all, and departments were established for engineering, welding fabrication, lamination and paint. You name it, Solace got it done... and gets it done!

For Dougherty, not only did his potentially risky decisions pay off professionally, but they did so also on a personal level with his family, in the sense that "future proves past." Today his cordial and charismatic wife Sarah and their two daughters Erin (20) and Graycen (9) and son Ryan (11) are "riding in the same boat" connected to the seas engaging in a similar way of life as did Dougherty when growing up. By the same token, it sounds like Ryan has become a mirror image of his dad – zooming around the waterways in his own outboard (since age eight), and sketching no less than three boats a week. 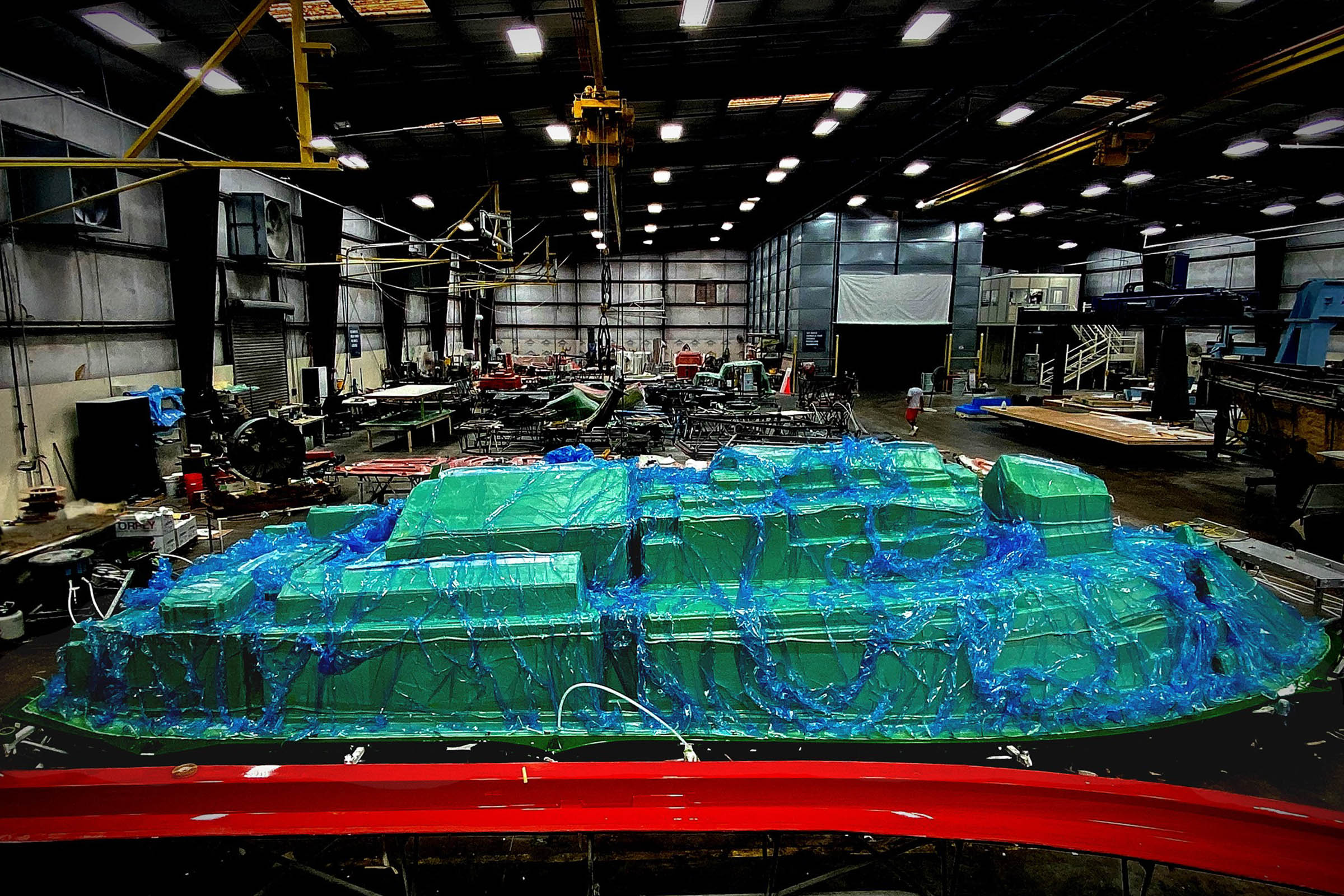 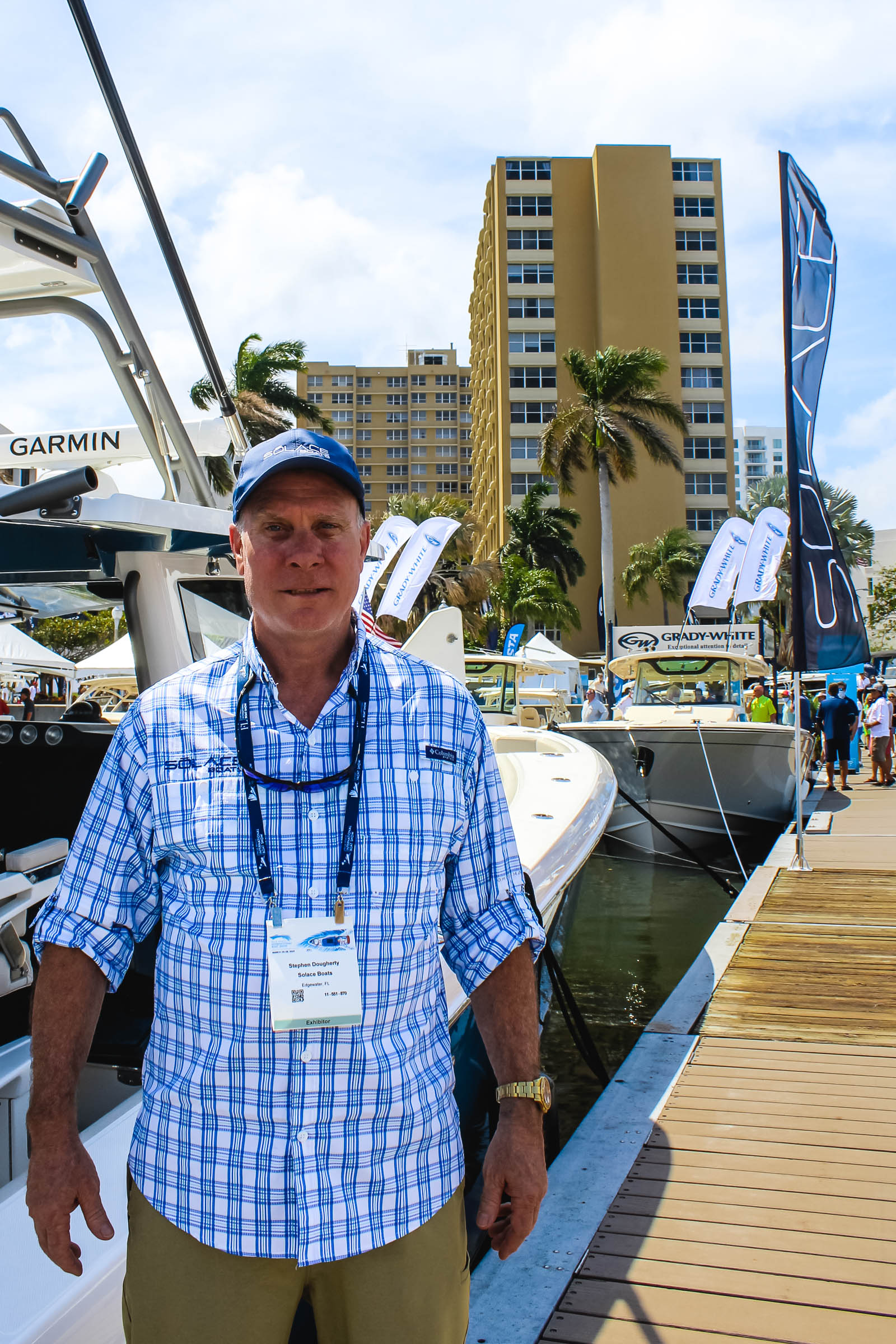 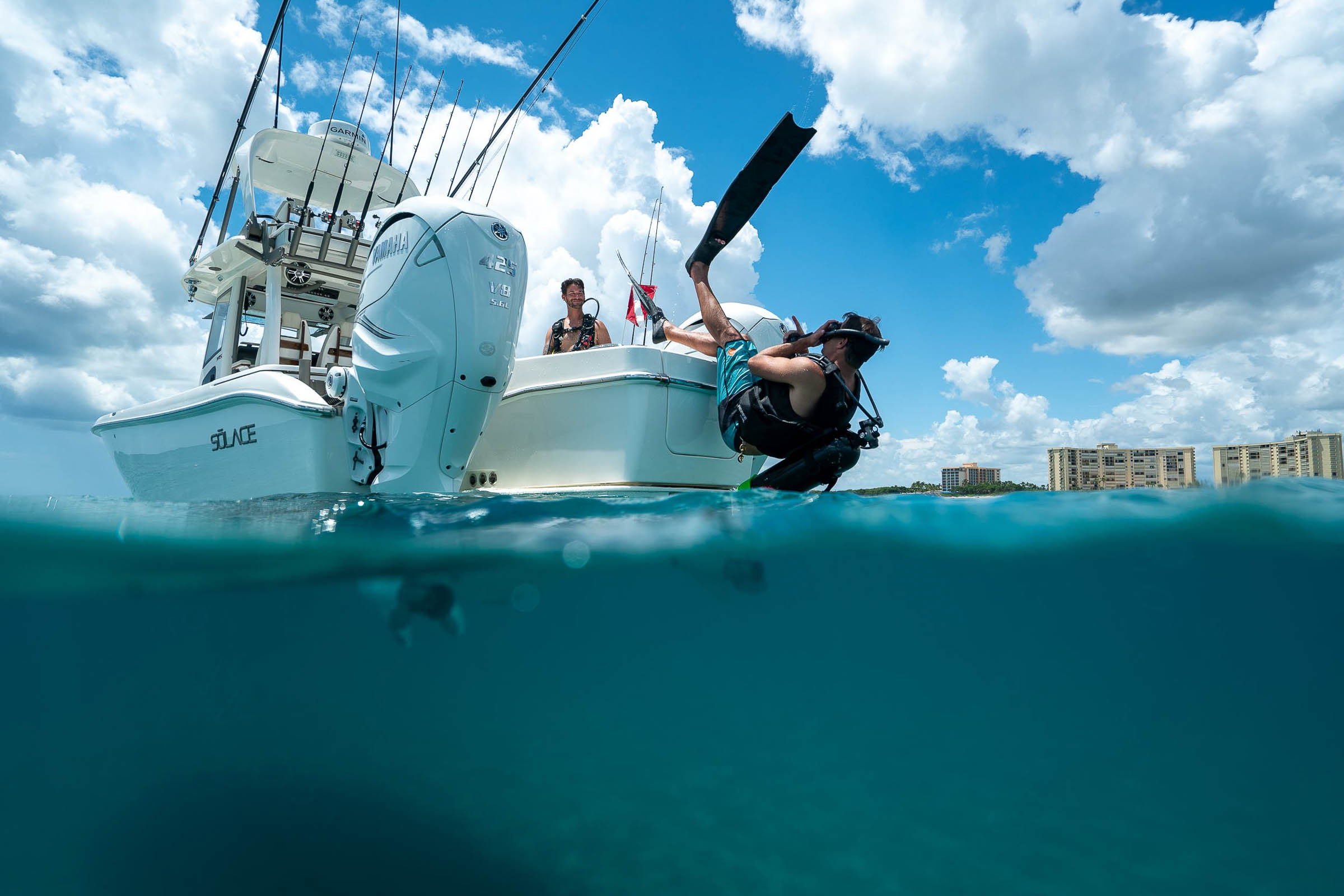 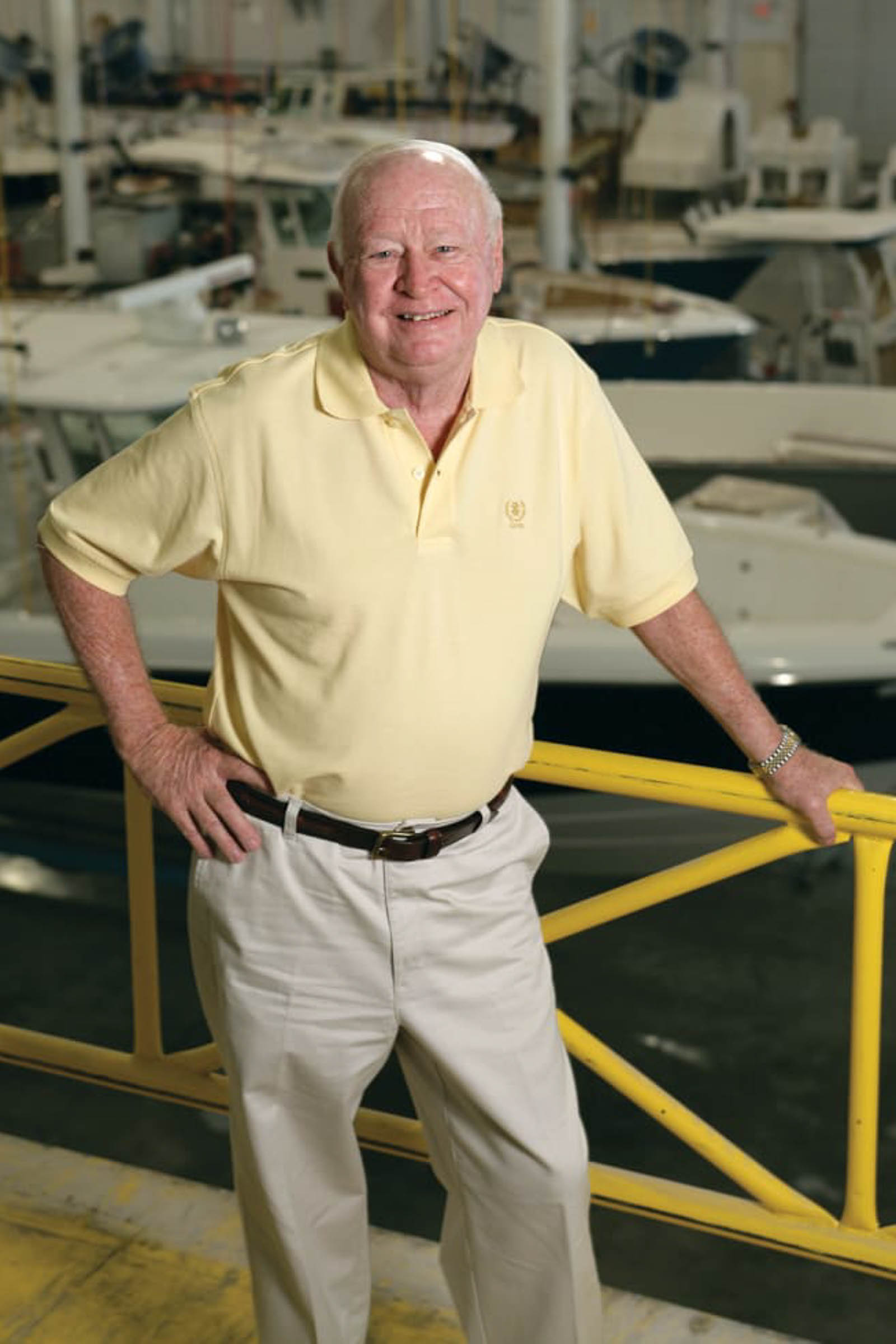 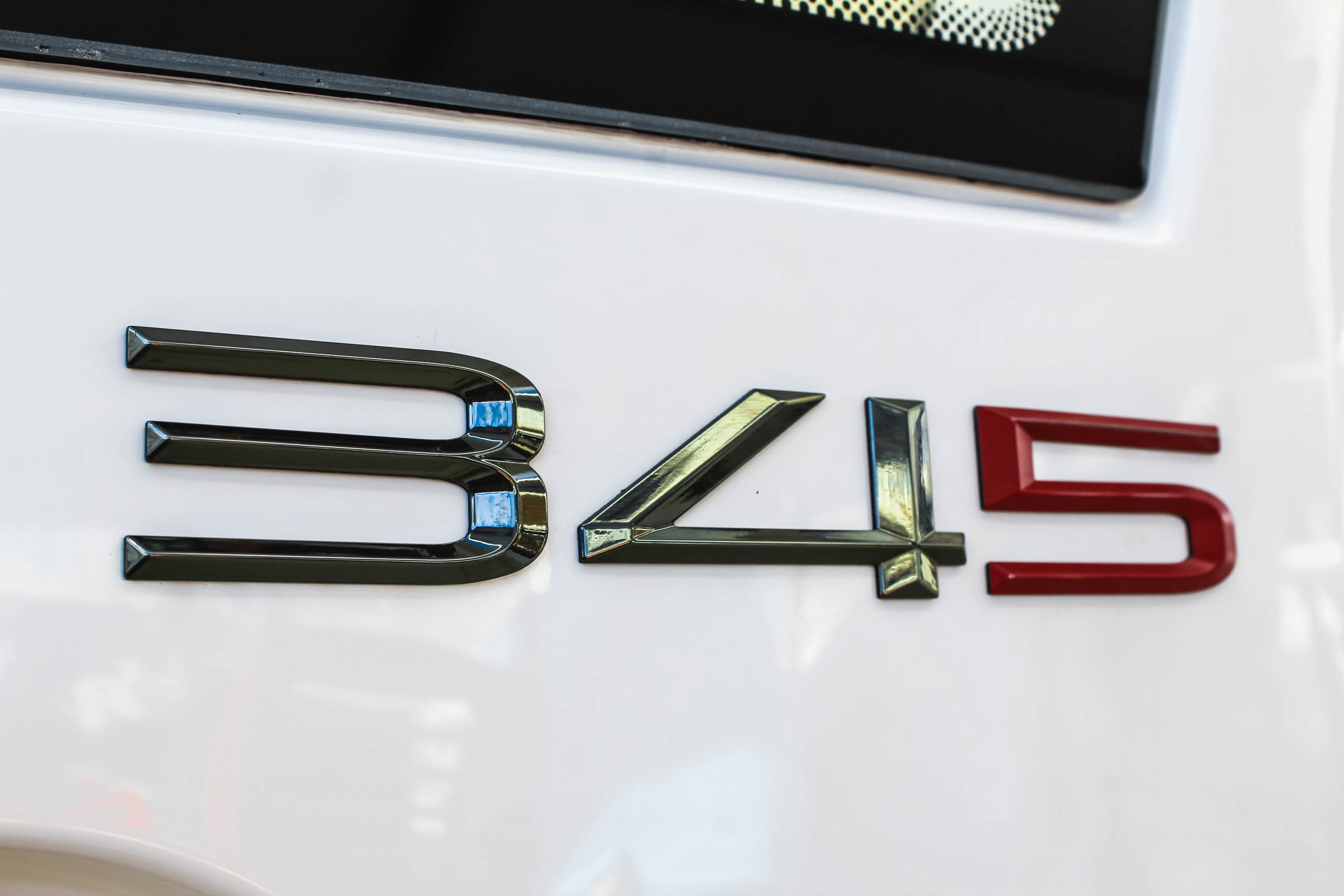 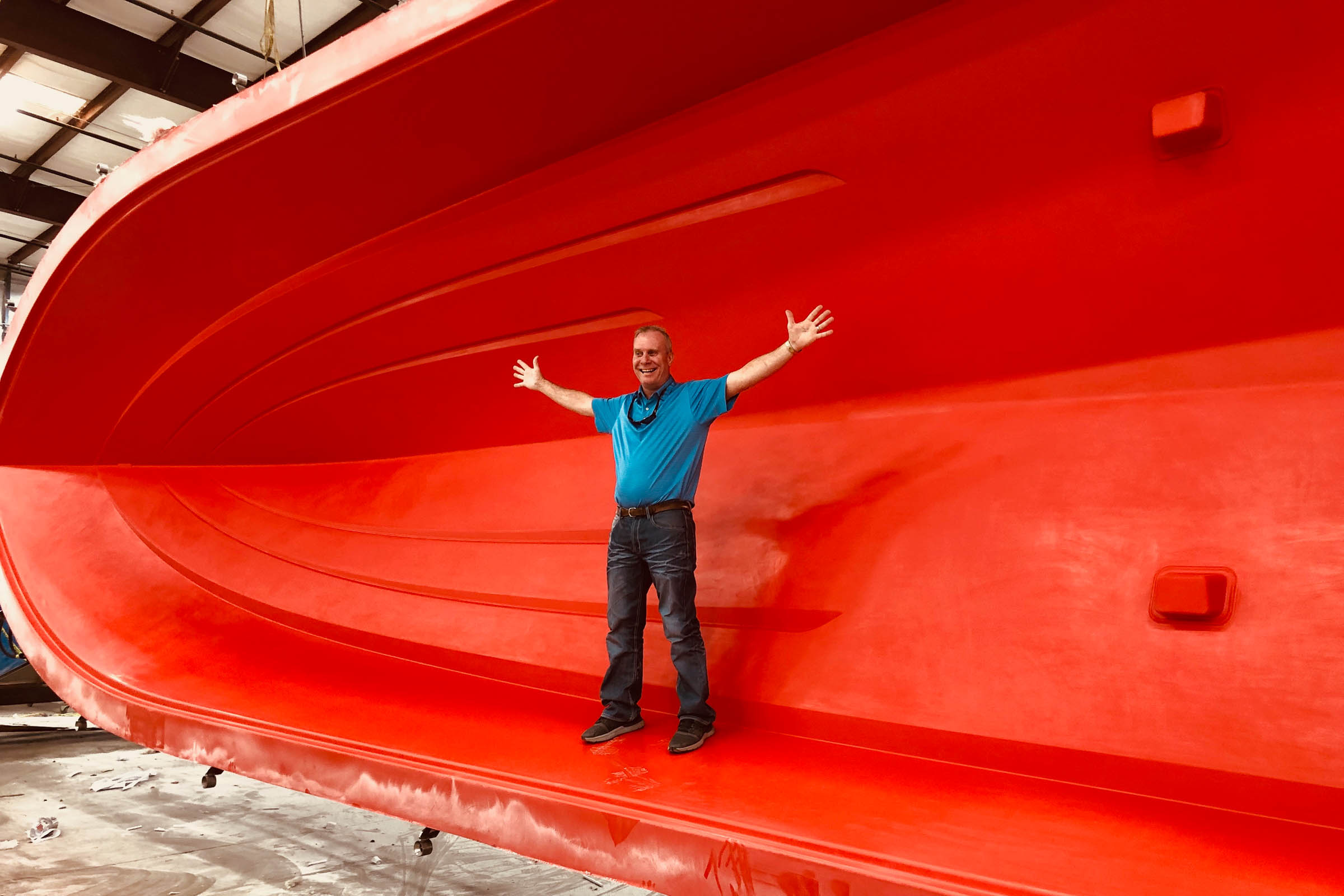