Why old school? Because scoring a coveted triple-digit ride to the rocking FPC Saturday raft-up in the legendary 1993 Fountain competition series raceboat, let me feel first hand how Reggie Fountain’s monster power, mono-hulls crushed their twin-hull offshore racing adversaries in the old days – and how the “Cat-Killer” call sign came to be. That’s why!

Equally unforgettable was my new-school Fountain commute down to the Southernmost City (on Wednesday prior to the tie-up), cranking through the tropical Florida mangroves on Team Yazz, a 42-footer sporting Mercury Racing Dual Cal 1350/1550 stern drives below the hatch. It was beyond epic being party to the effortless conversion of engine power – with the flick of a key fob and swap of a fuel tank – igniting a blur of raw speed launching the already powerful dual 1350-hp predator into a dueling 1550-hp pureblood beast.

But, none of the badassery gunning around in this pair of weaponized Fountains would have come to fruition if not for the South Carolina-based boat services and rigging outfit BAR Marine and Charleston Composites, under the direction of world champion racer Ben Robertson II. Bringing more than 50 years of high-performance boating experience to the business, Robertson and his crew must be recognized, for without their superlative magic touches – neither Fountain would exist in its current form, nor perform in its fervent, fine-tuned fashion. 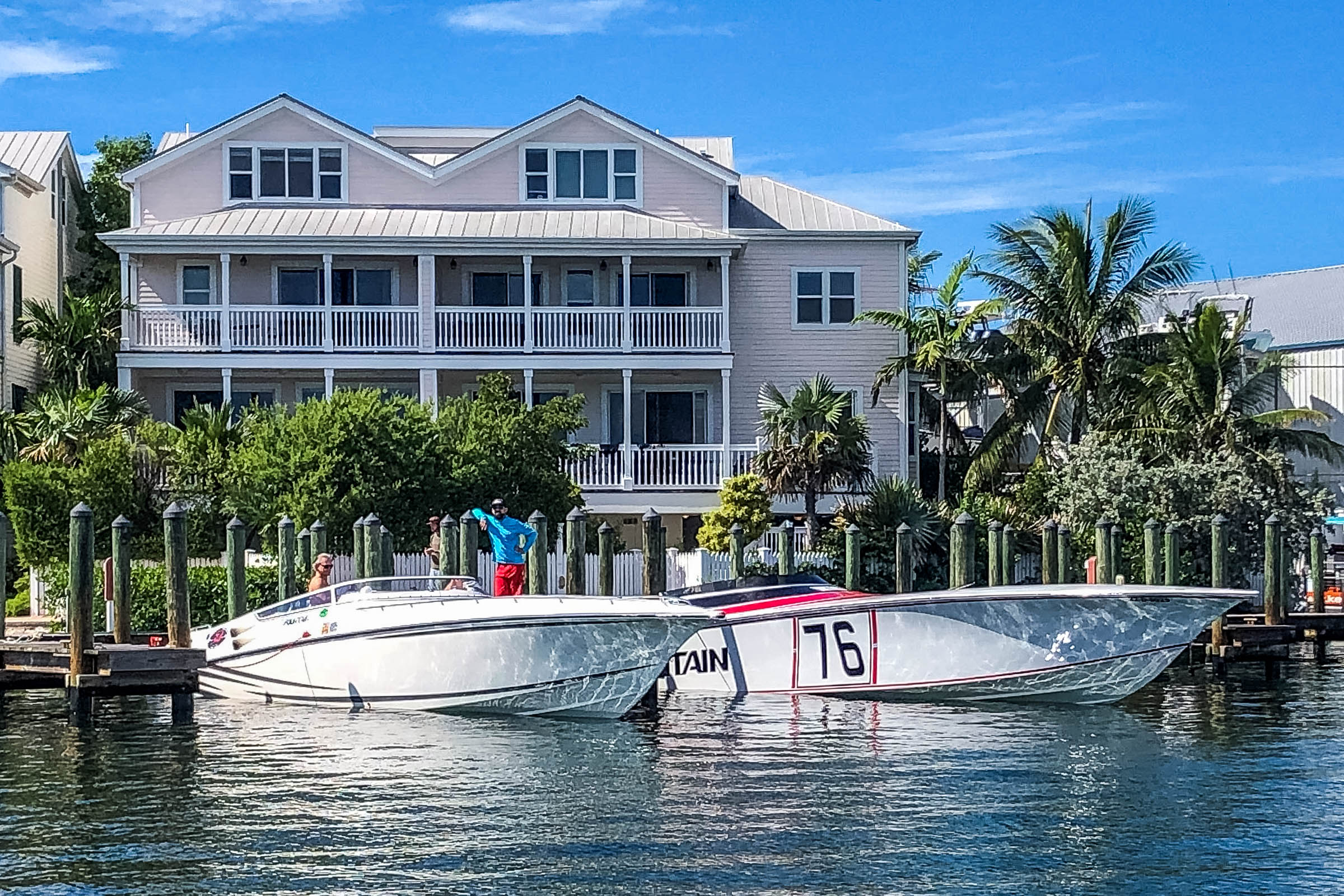 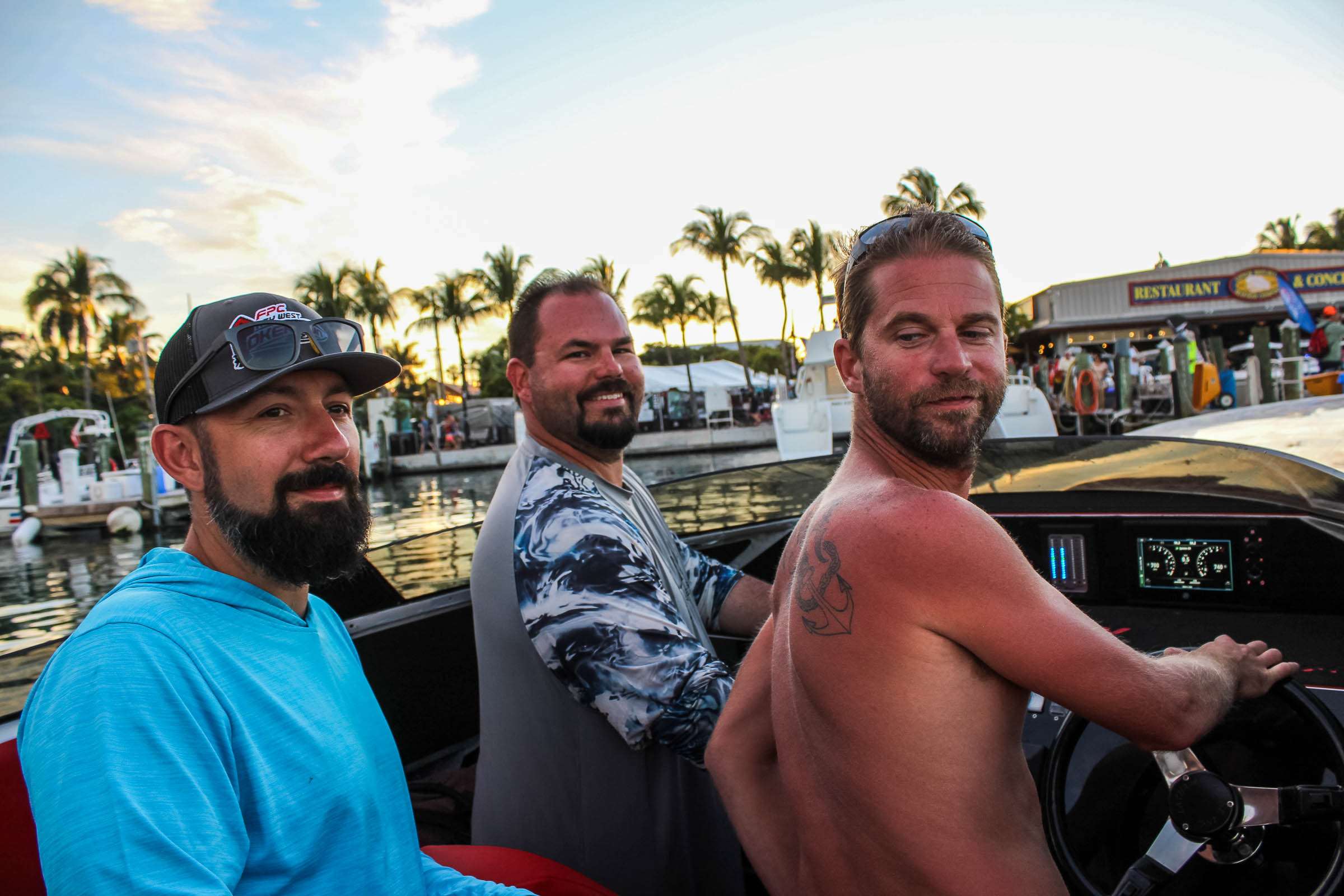 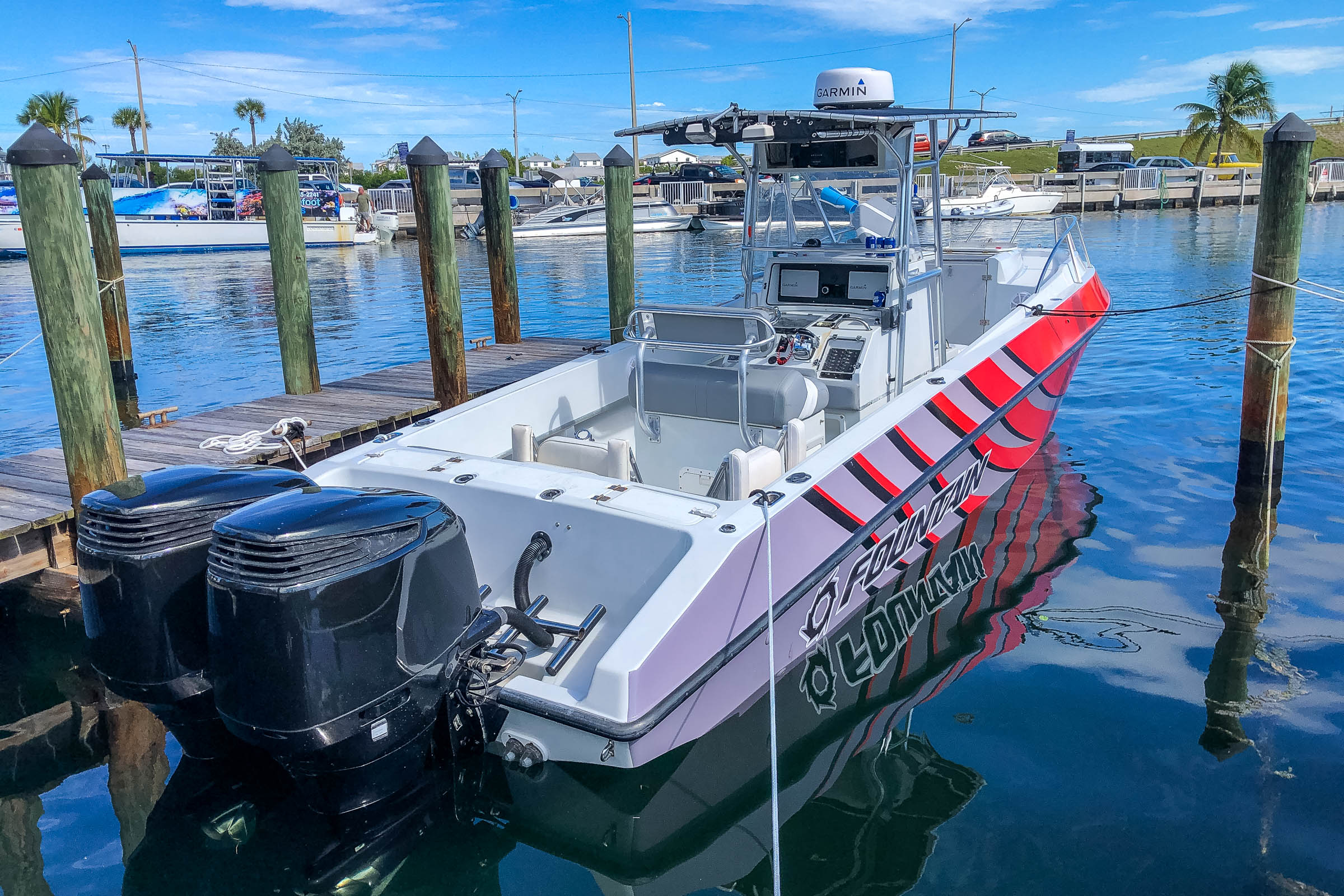 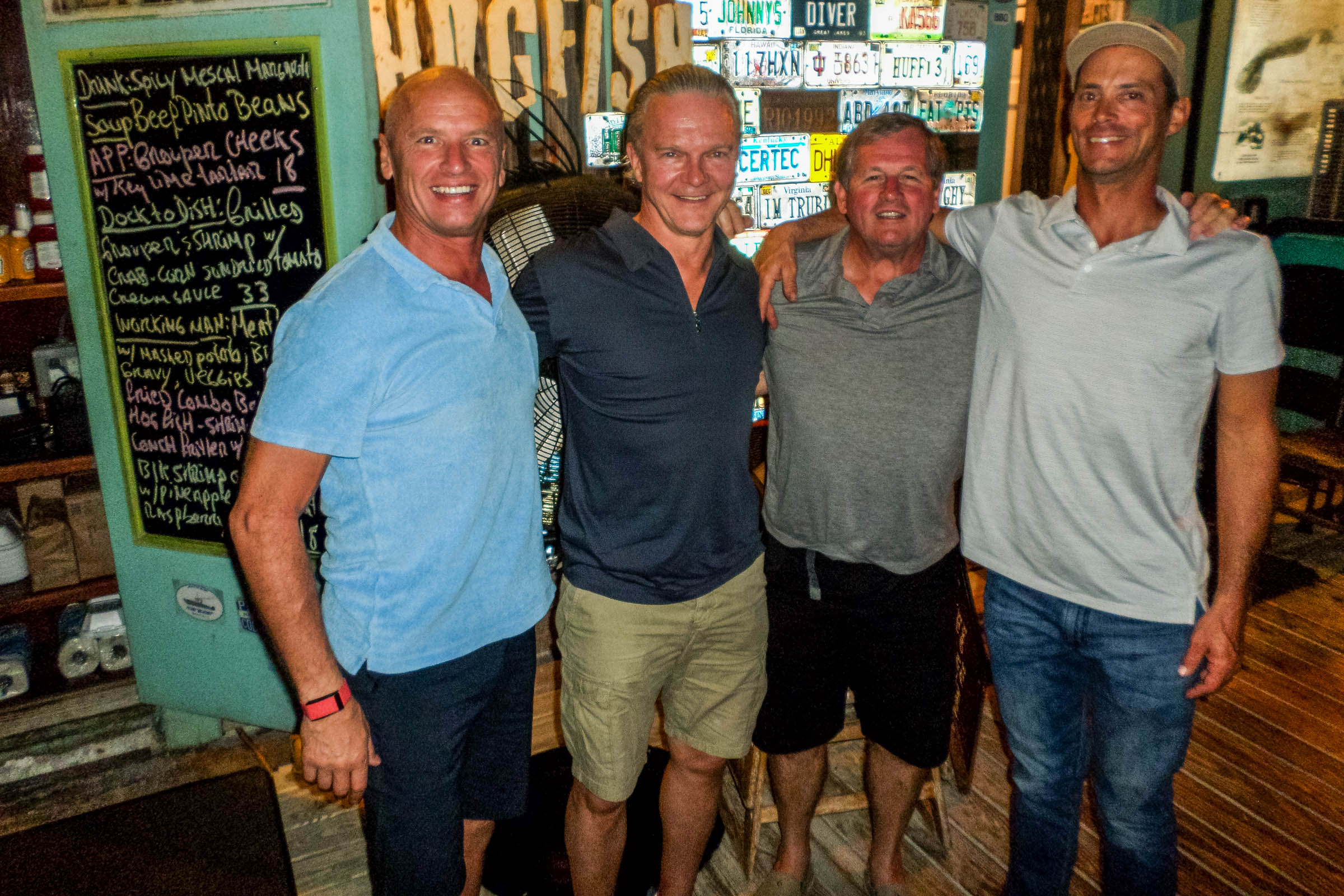 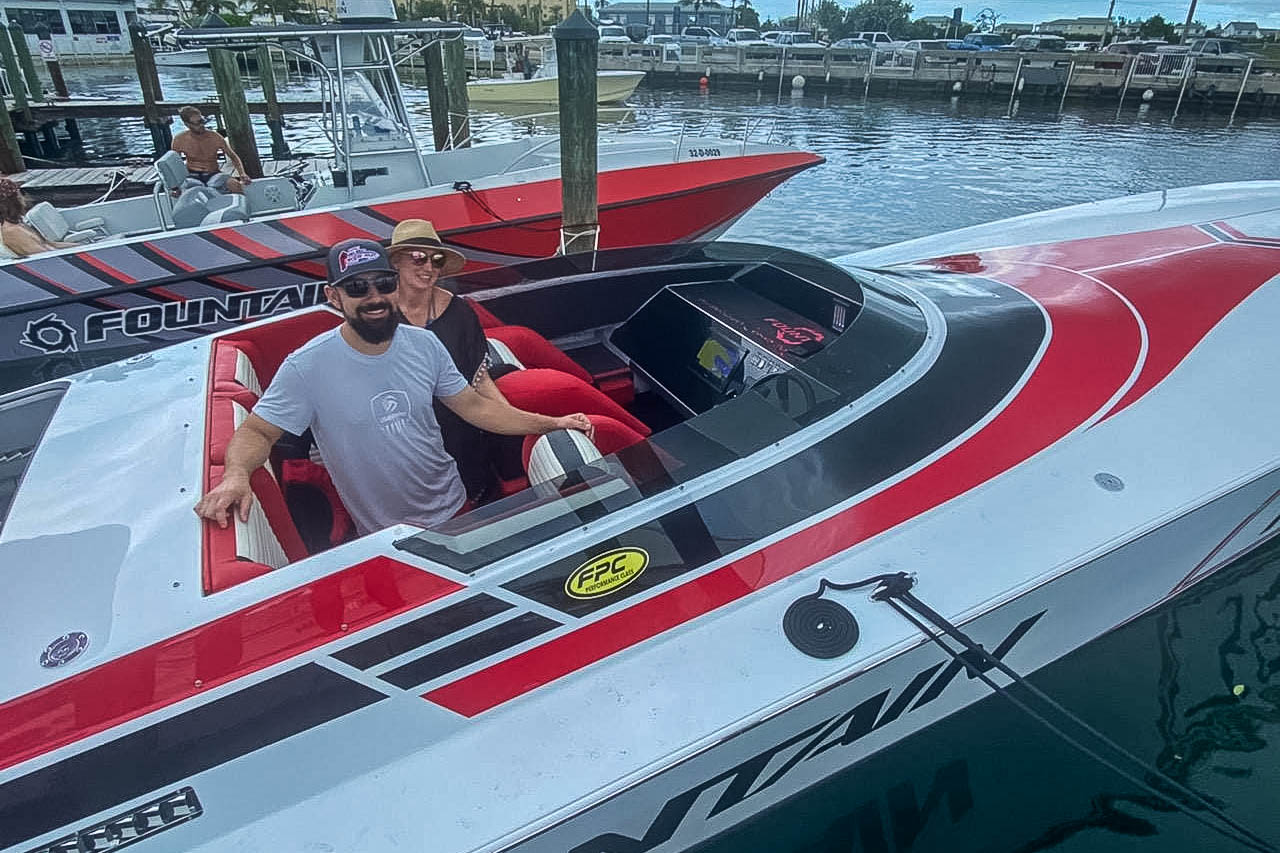 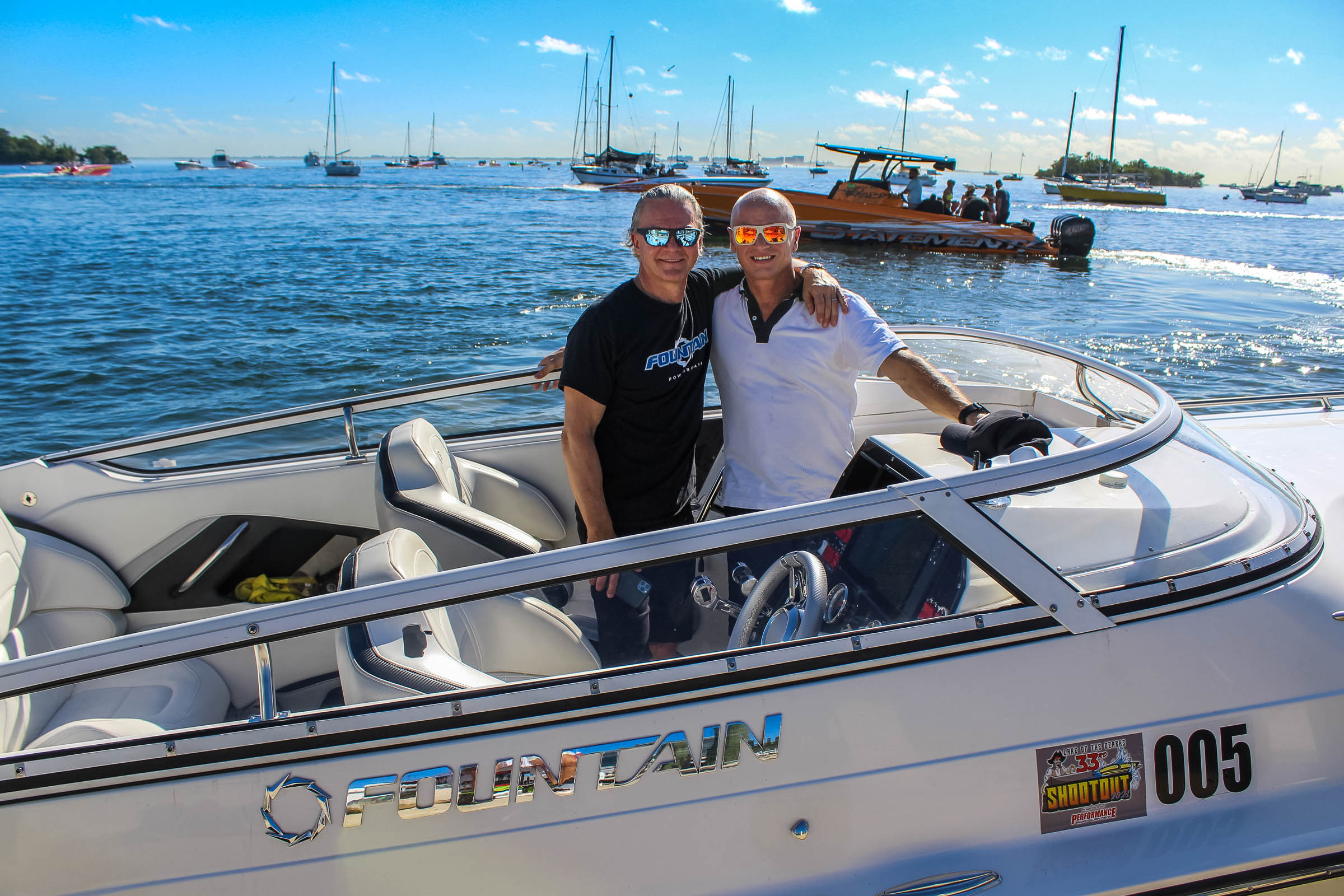 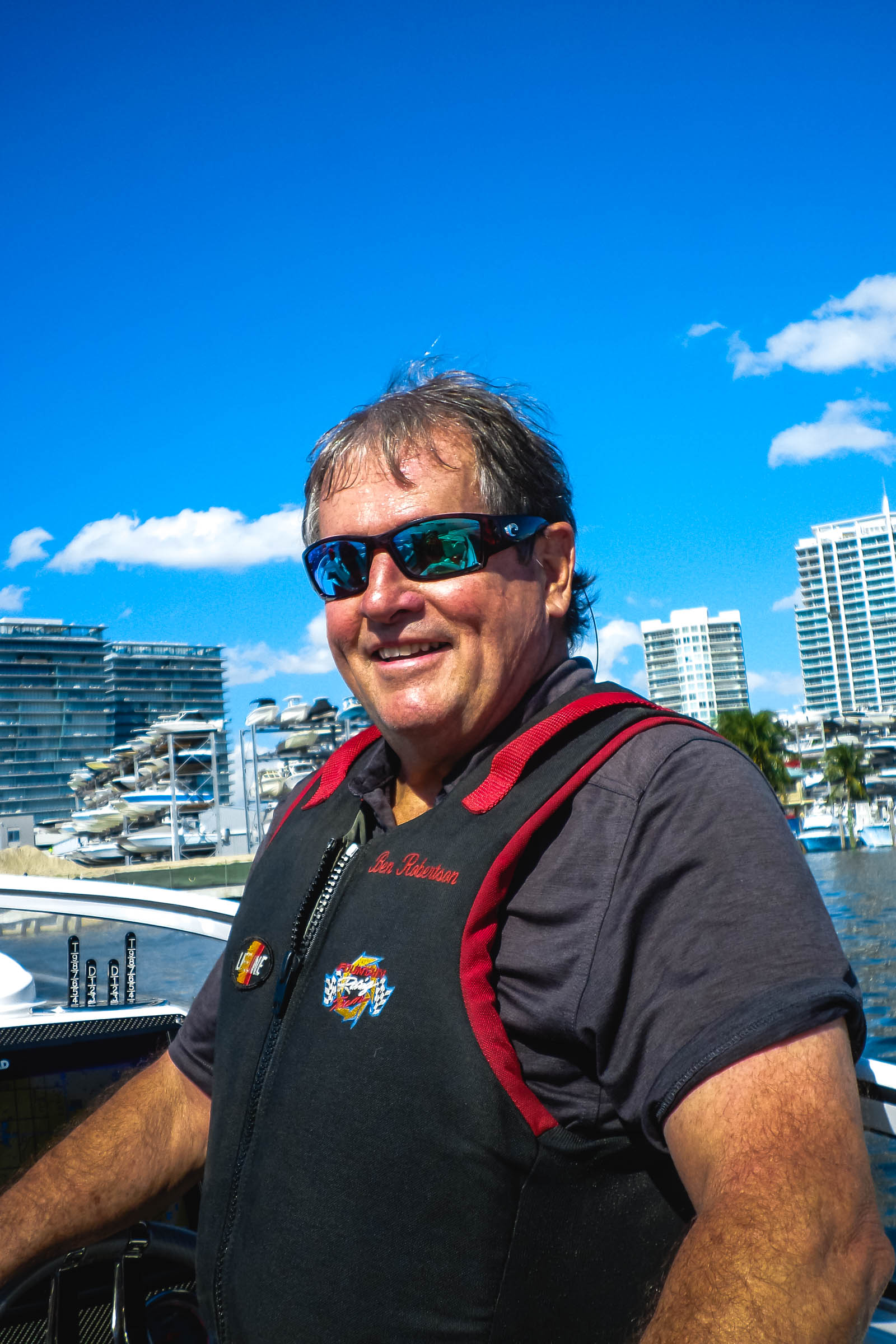 BAR Marine can take a bow for the 47-footer’s contemporary comeback, but there would be no Fountain taking flight to start with (or story for me to write), if not for Kevin Taylor. His fancy for fastboats led him from an online sales listing to a Kentucky garage, where the dilapidated 90s era speedboat sat hibernating. One of only three of its kind commissioned at the Fountain factory race plant, the very rare black and green go-fast gem was deserving of a second chance at life in the fast lane.

Fortunately, Taylor’s boss Nate Stuewer, owns the South Carolina-based outfit Redline Motorsports, and thus, is well versed in speed-related subject matter. Seeing the boat’s potential, the motorbike and Jet Ski devotee agreed to the purchase, and by February of 2021 BAR Marine had a bare deck and hull to strip down and prep for Holy City Boat Works paint transformation to red, white and black.

By July, the nostalgic piece now bearing black penned port and starboard hull side #76s reappeared at BAR Marine ready for rigging. Charleston Composites took the lead writing codes and tooling all the CNC-machined components including the killer new scoop engine hatch that Ben Robertson III was instrumental in designing. At the same time, American Equipment was put in charge of covering over all the upholstery. Robertson recalled, “Previously, the boat had triple Mercury Racing 1000s, so we started in the stringer compartment cutting it up to fit the staggered twin 1350s going in. The bulkheads were next. The former owner wanted to make a cruiser out of it and had cut up the cabin, so we had a lot of extra wood to remove.” 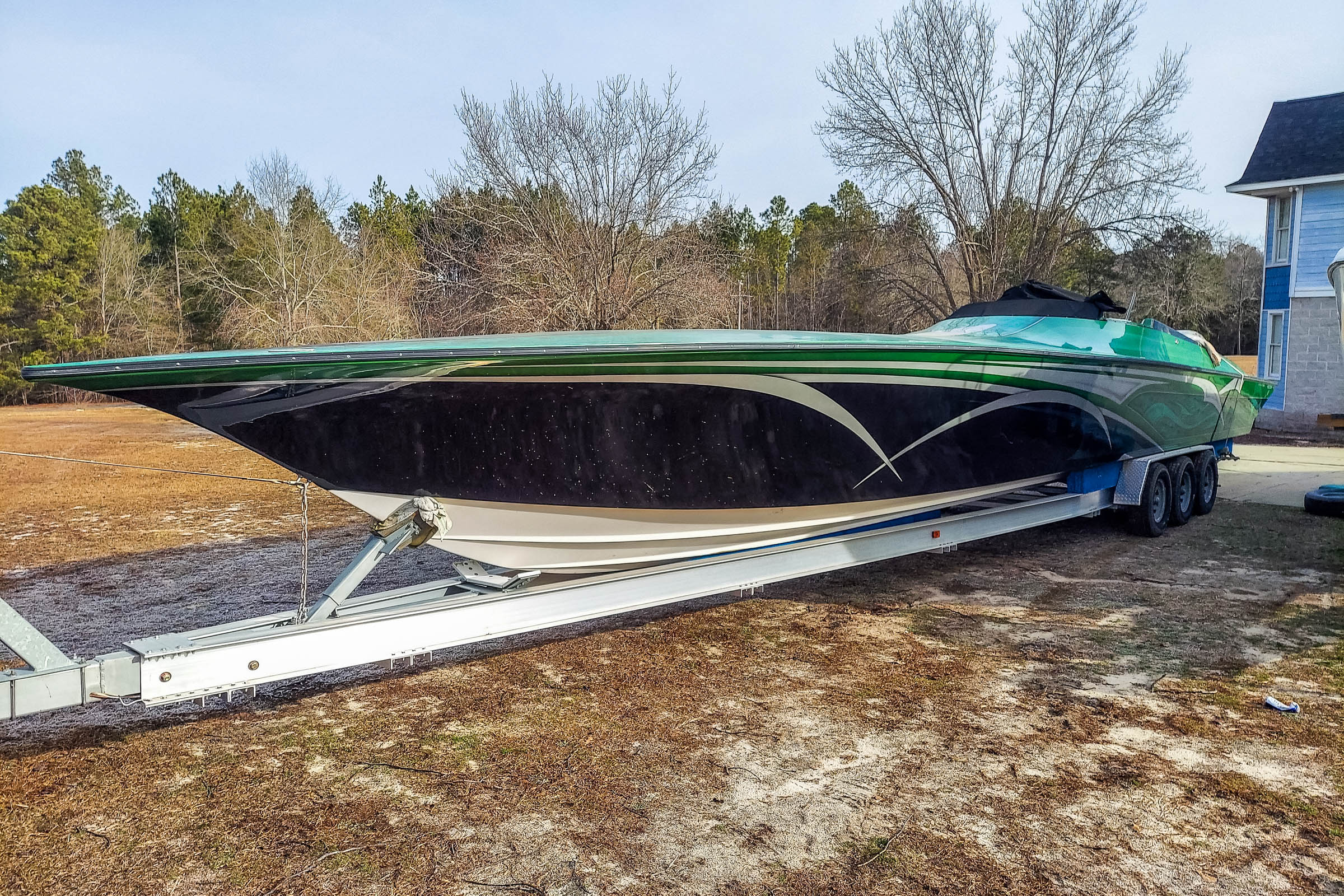 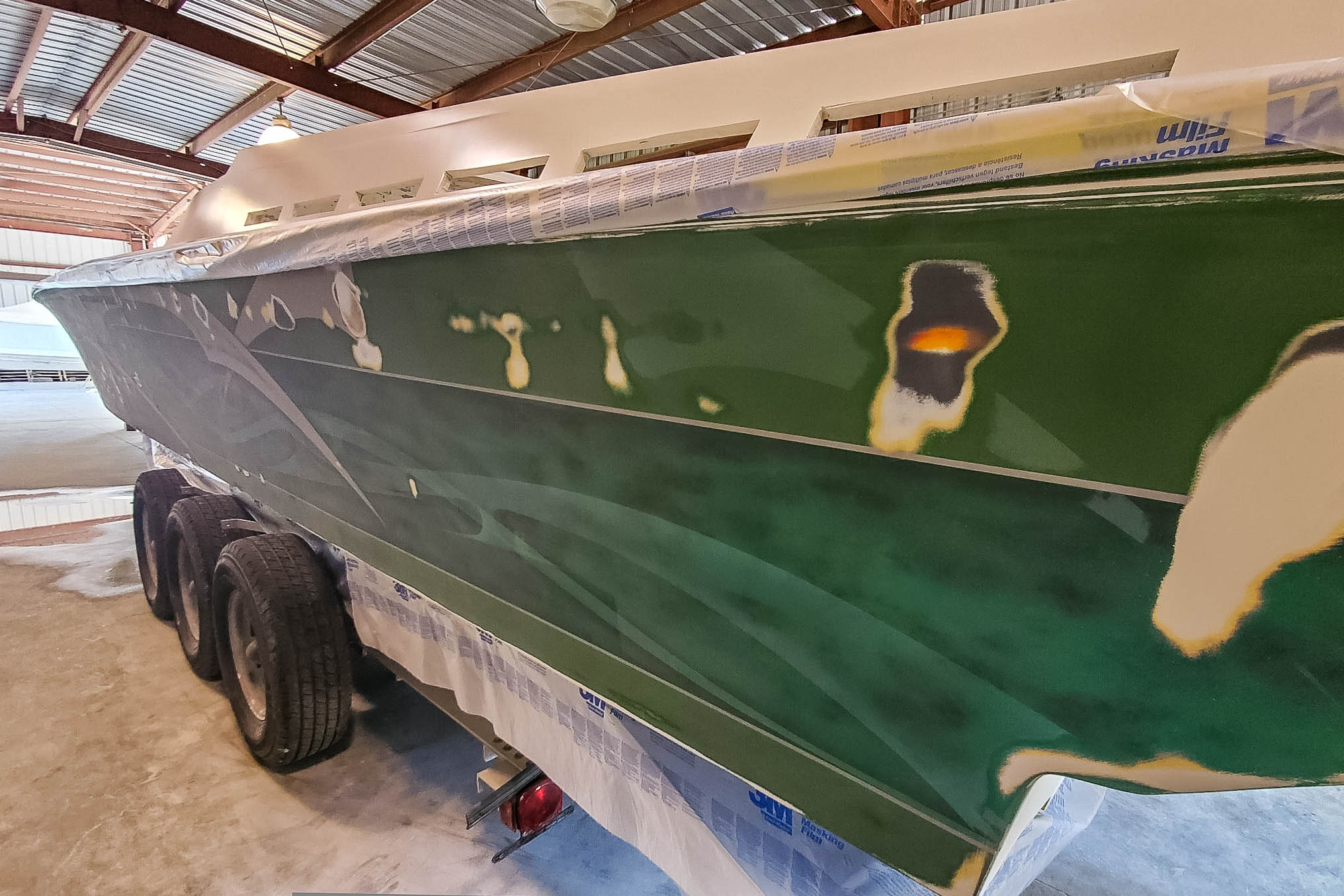 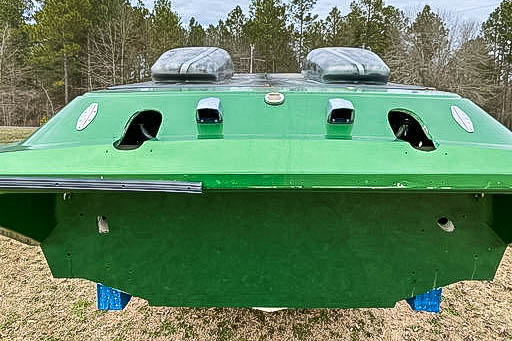 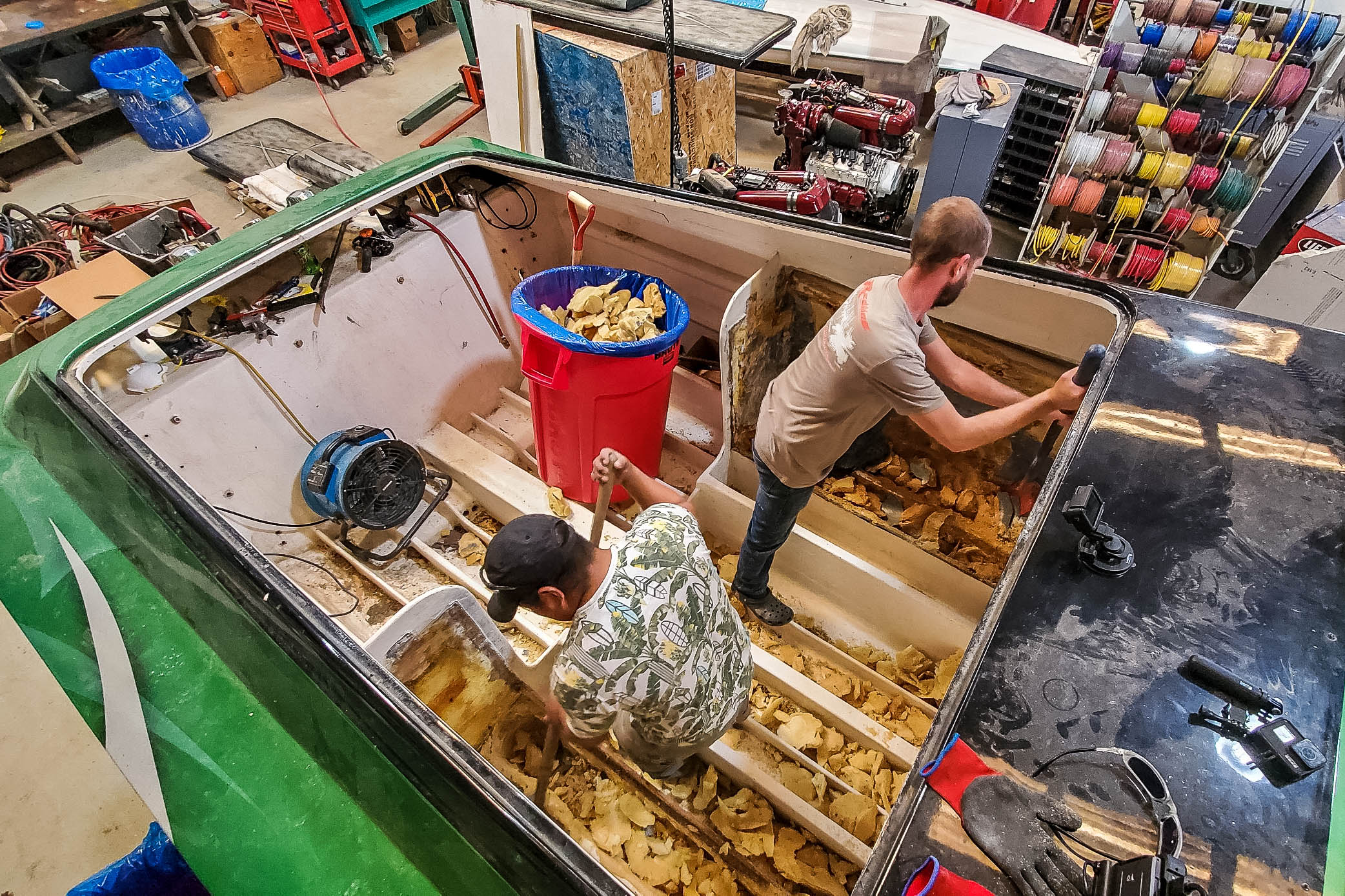 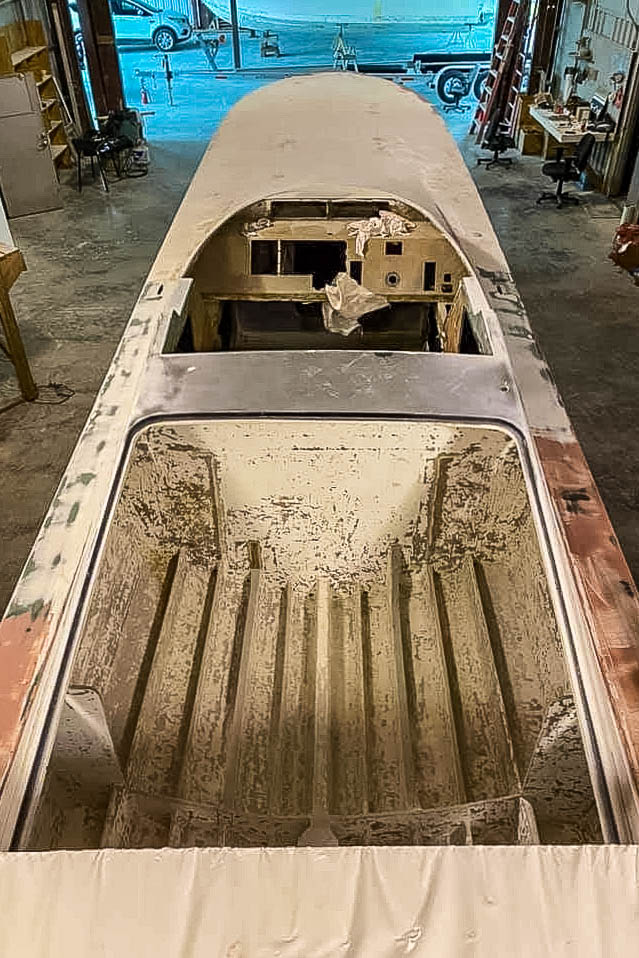 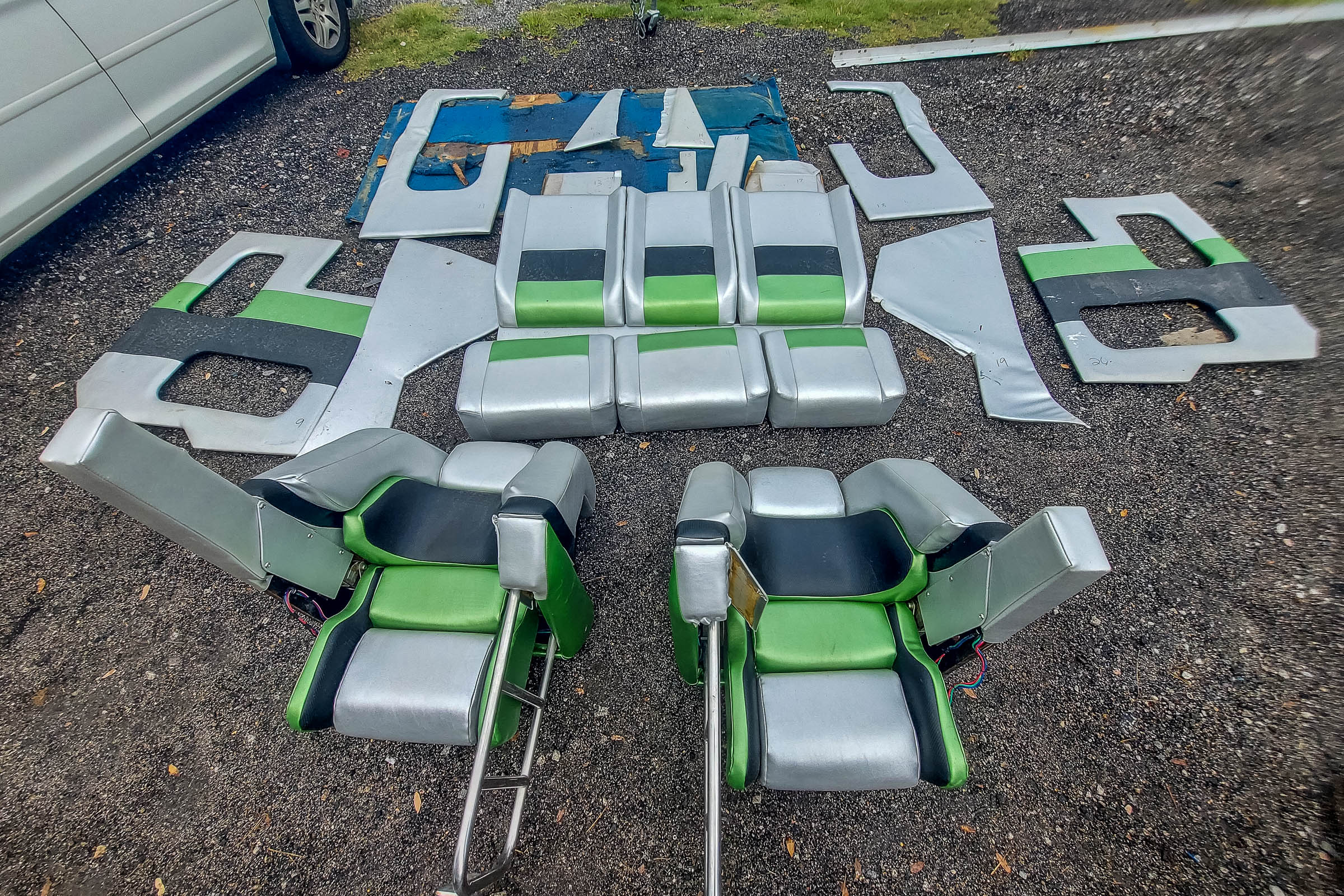 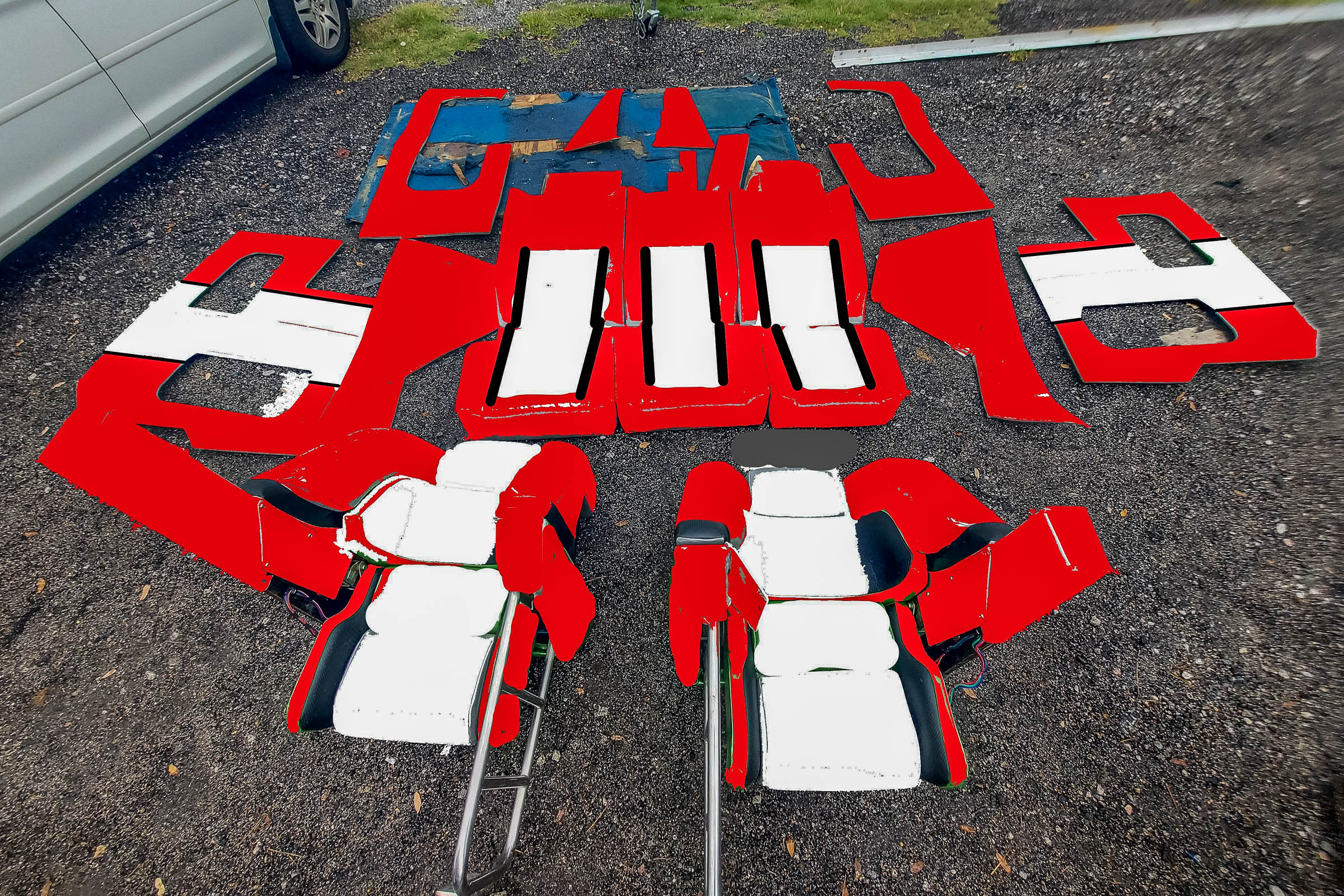 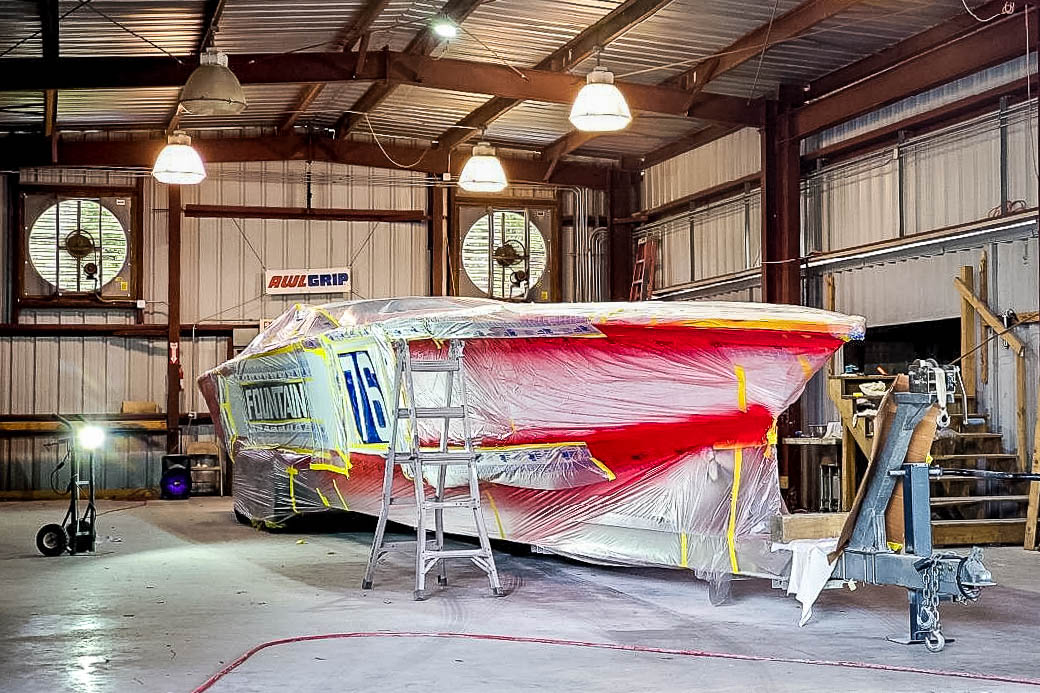 Working under the gun, it was a struggle to the end to get er’ done, thanks to the continual logistical supply chain nightmare created by the current corrupt administration and its blatant intentional destruction crippling the country, one example being: the four month delay waiting on the CMI exhaust system. Reflecting further on the next stage of rigging, Robertson continued with, “In September, Tom Crets, my former crew chief, came onboard when it was time to get into the cockpit. After patching things up, red and black marine decking paying homage to the flagship and a new acrylic dash were designed, prior to replacing the mechanical system with a digital DTS setup including a 12” Garmin GPS and accompanying VesselView.”

Following more than 18 weeks under the “rigging” knife, my first encounter with the revived raceboat was listening to the twin 1350s belt out their last tunes of the day as the sun melted into the horizon behind it, while rolling up to the dock behind our condo hot off the Thursday test and tune run down from Miami. My actual ride came 48 hours later en route to and from the mother of all powerboat parties over at Woman Key.

Devouring the defiant big stuff and gently grazing over the two to threes, the revamped 47’ joyride was just a joy to ride in. Nate, Ben III and Kevin each took a turn feeding the throttles and fueling my heart with horsepower, tearing up the transparent waters at around 110 mph. Once dialing-in duties are complete, peak power should send it to 120 mph; until then its smaller sibling stepped up to the 120-plus plate showing big brother how it’s done. 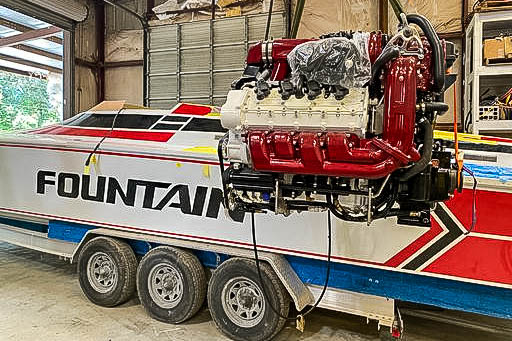 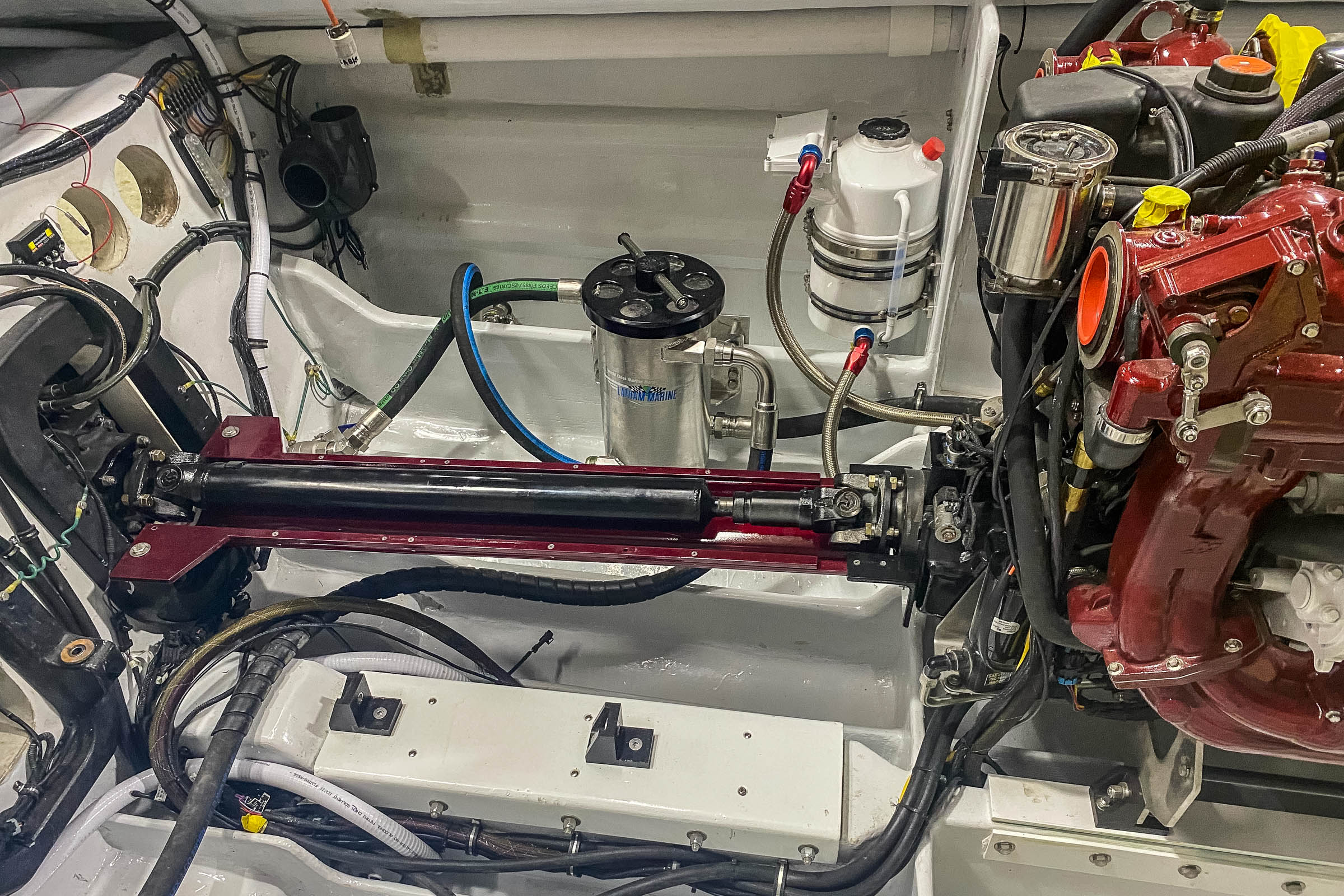 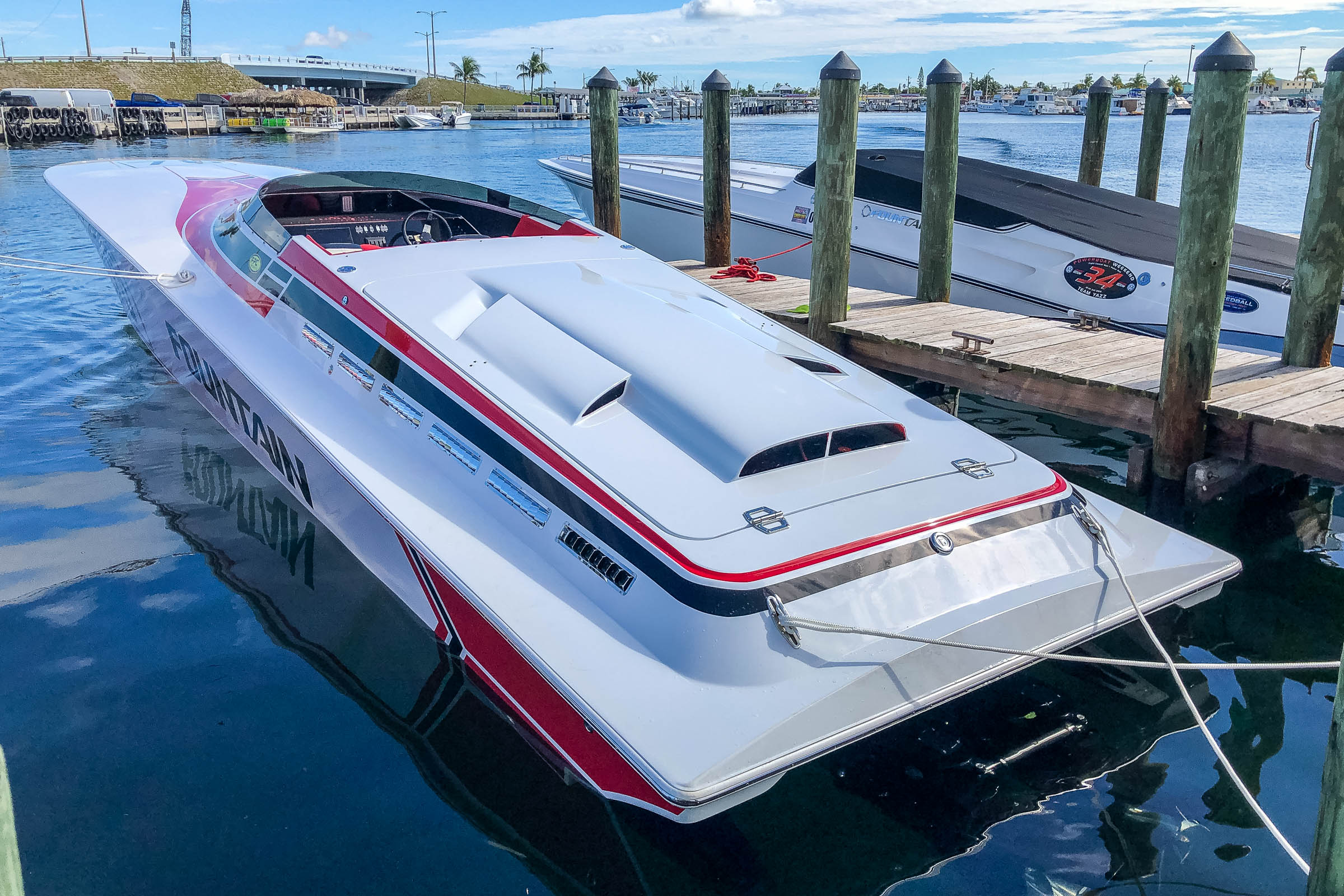 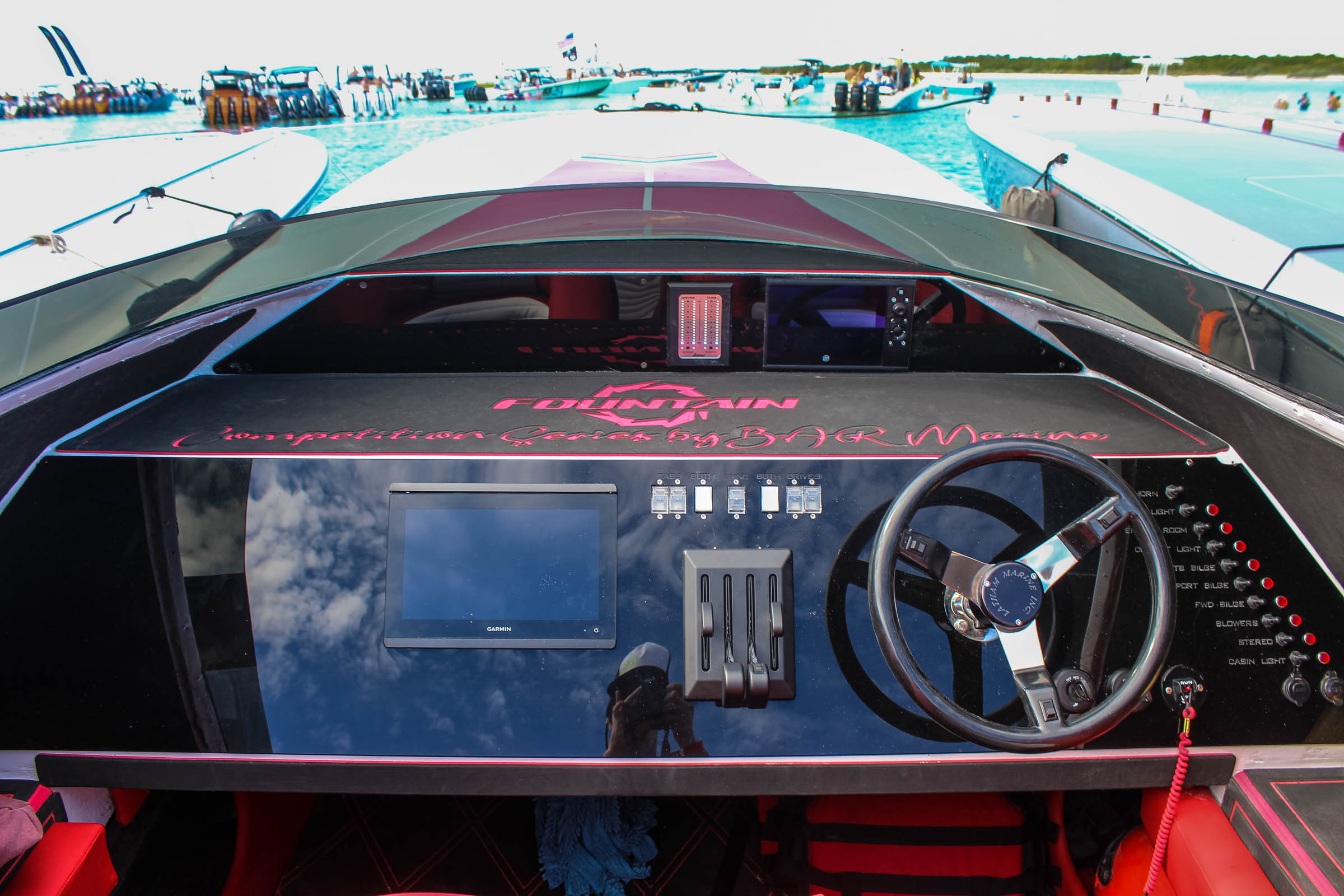 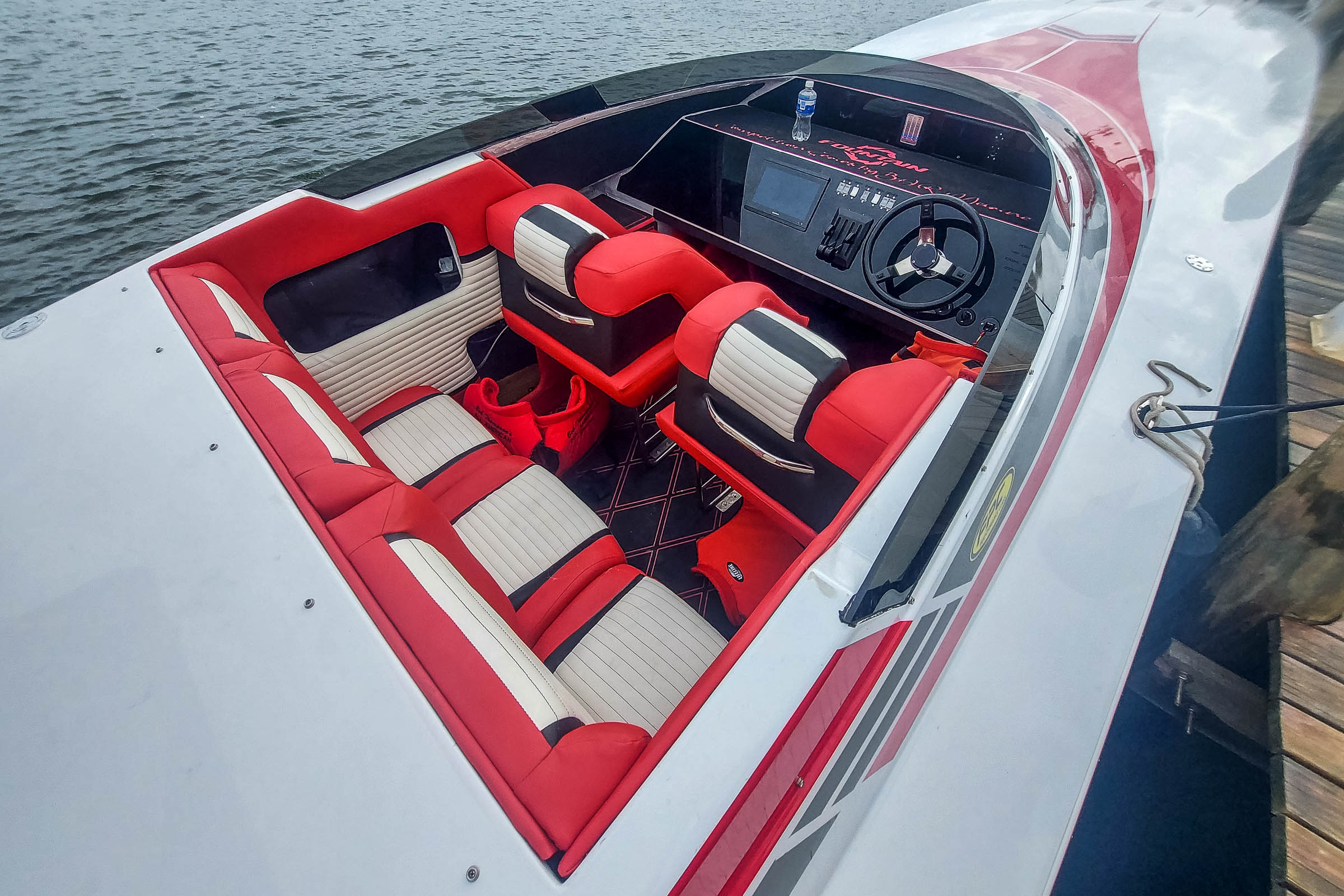 Meet Christian Dahlberg… he’s the Swedish fastboat fanatic and fresh face on the FPC poker run that made the pilgrimage from across the pond in Stockholm for his first dose Mile Marker One marine mayhem, and more importantly – to raise some rooster tails getting his first taste of the new Merc 1550s in his 42’ Fountain.

Next up is Claes Söderberg. He’s Dahlberg’s best buddy who came along “for the ride” to keep him company – because that’s what friends are for! In awe of it all, from the professional races and poker run powerhouse machinery, to the parties and very-near-to-bare body painting stage at the Conch Republic, it’s no surprise the Scandinavian mates were easily smitten by the must-attend phenomenon and are contemplating doing it all over again next November.

But until then, careening around the rocky waterways that Dahlberg knows all to well nearby to their summer home on Sandhamn Island is where the financial investor and his family will be doing their boating. Prior to purchasing the Fountain, he was navigating the narrow inlets in his twin MerCruiser 500 EFI-powered Formula; however, hitting the 50 knot (58 mph) threshold was “knot” enough, as Dahlberg divulged to me while hanging out on the transom in the Key West harbor just in off the poker run, waiting on the Super Cat and Extreme Class boats to take the start.

Cue in the 42’ Fountain. Yes I’m talking about the one we were sitting on a few feet from the inner turn buoy with M-CON and Team Huski heading right at us… it’s the same one a friend in the brokerage business found down in Texas. “At the time, I was in Sweden, so he went to check it out. After reporting back, ‘You can’t find a better boat at a better price,’ I bought the 2007 model over the internet. It was originally named It’s Only Money but I will be changing it to Yazz after my daughter Yazzmine, once the boat is back in Europe,” explained the smiling Swede.

After taking possession of his latest V-bottom, feeling the need for MORE speed, Dahlberg upped the horsepower ante from Mercury Racing 700s to 850s, but his desire to make the Fountain faster was still not satisfied. So, what’s a man to do… go big or go home? Opting to GO BIG, he bumped up to the dual cal 1350/1550 game changers. He also made sure to thank Norwegian friend Erik Eriksen who originally suggested the set-up, and then later connected him with Robertson at BAR Marine.

It gets better… after the heavier pony power was put in, with Dahlberg’s blessings, Robertson headed to the LOTO Shootout to let the mini Cat-Killer out to roar in a big way. The expert racer catapulted the white and gray Lightening into the limelight laying down a mighty-fast 152-mph pass (more on that here: https://www.luxurycenterconsoles.com/the-2021-loto-shootout-horsepower-and-hotness-all-around/).

Although, prior to the American kilo, the headline-making Fountain was already causing a commotion traversing the Baltic Sea as a combatant in Sweden’s annual Speedball Run.  Much like a professional race, the Speedball Run is a track course around buoys, so really the only difference is that it’s not an officially sanctioned event. Judging from the European boater’s enthusiastic demeanor when reminiscing about the run, I sense he’ll be back this summer. In 2019, before the heavy-duty artillery entered the engine compartment, Dahlberg’s top speed was 138 mph. In 2022, the million dollar question is now: Can he eclipse Robertson’s top hop of 152 mph? And what better a place to get a little practice running the boat, than in the wide open Florida waters with the #76 Fountain as a side-by-side playmate. 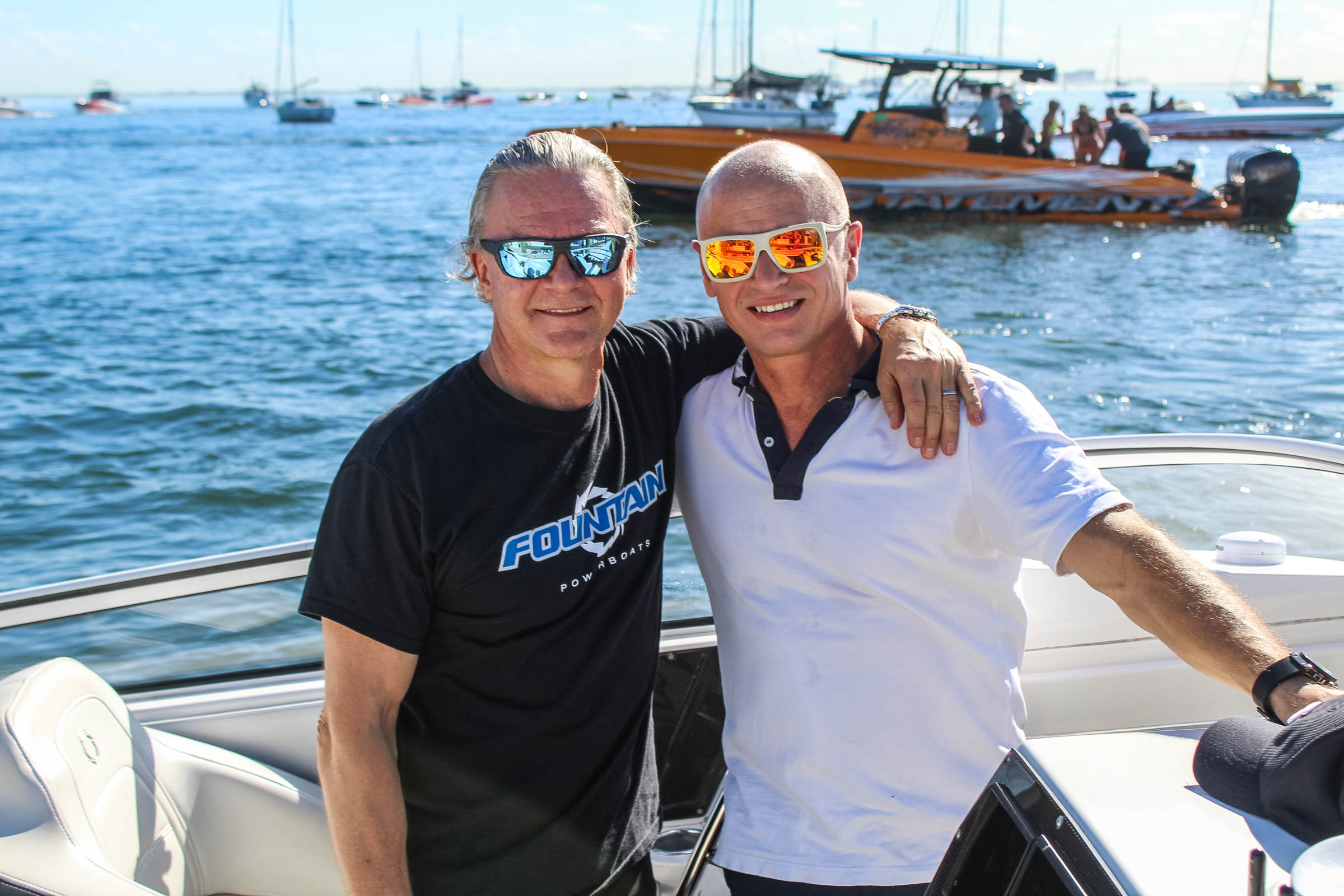 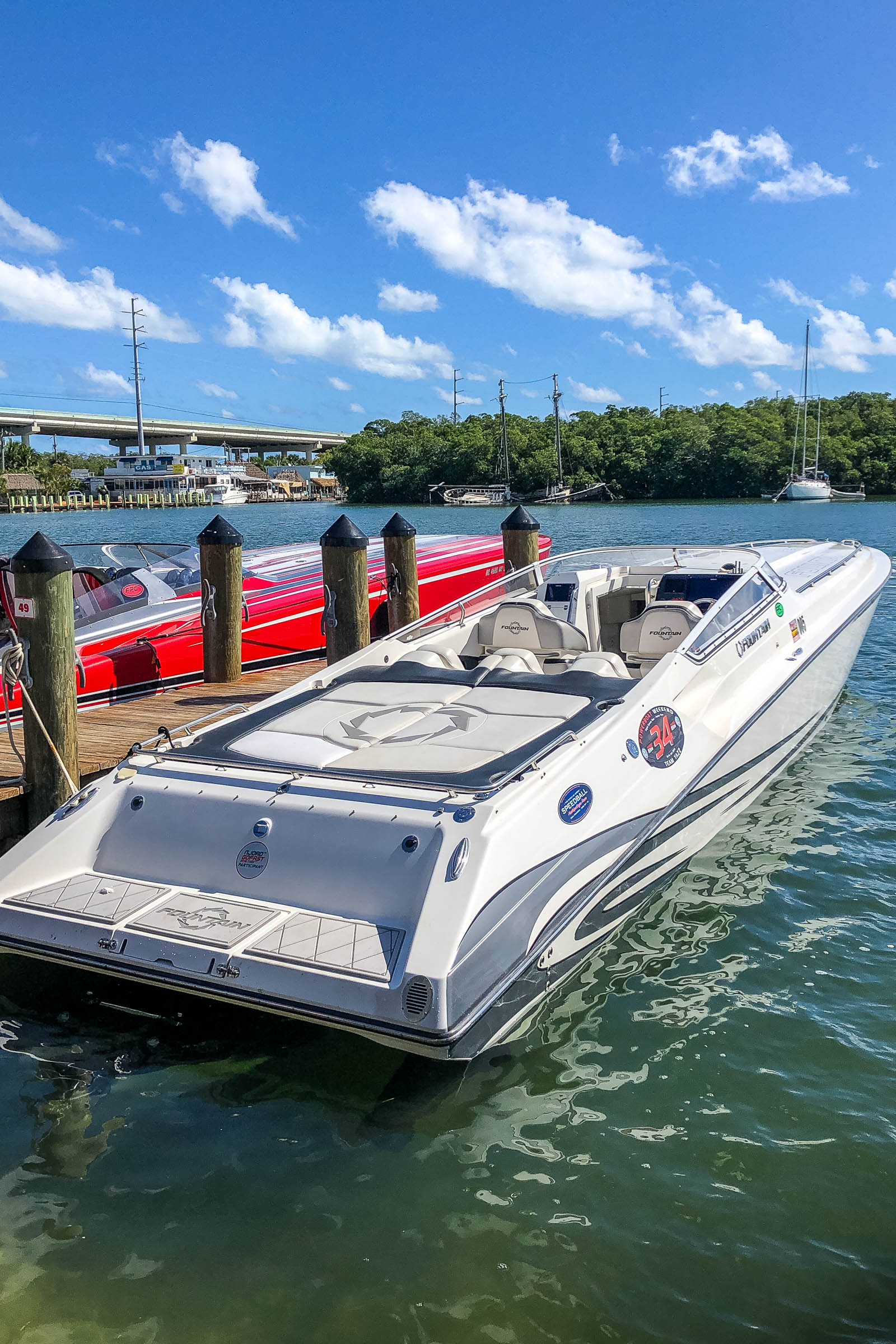 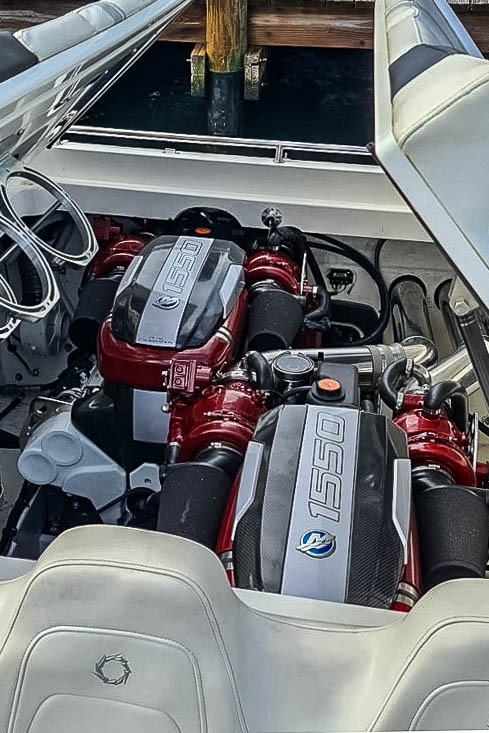 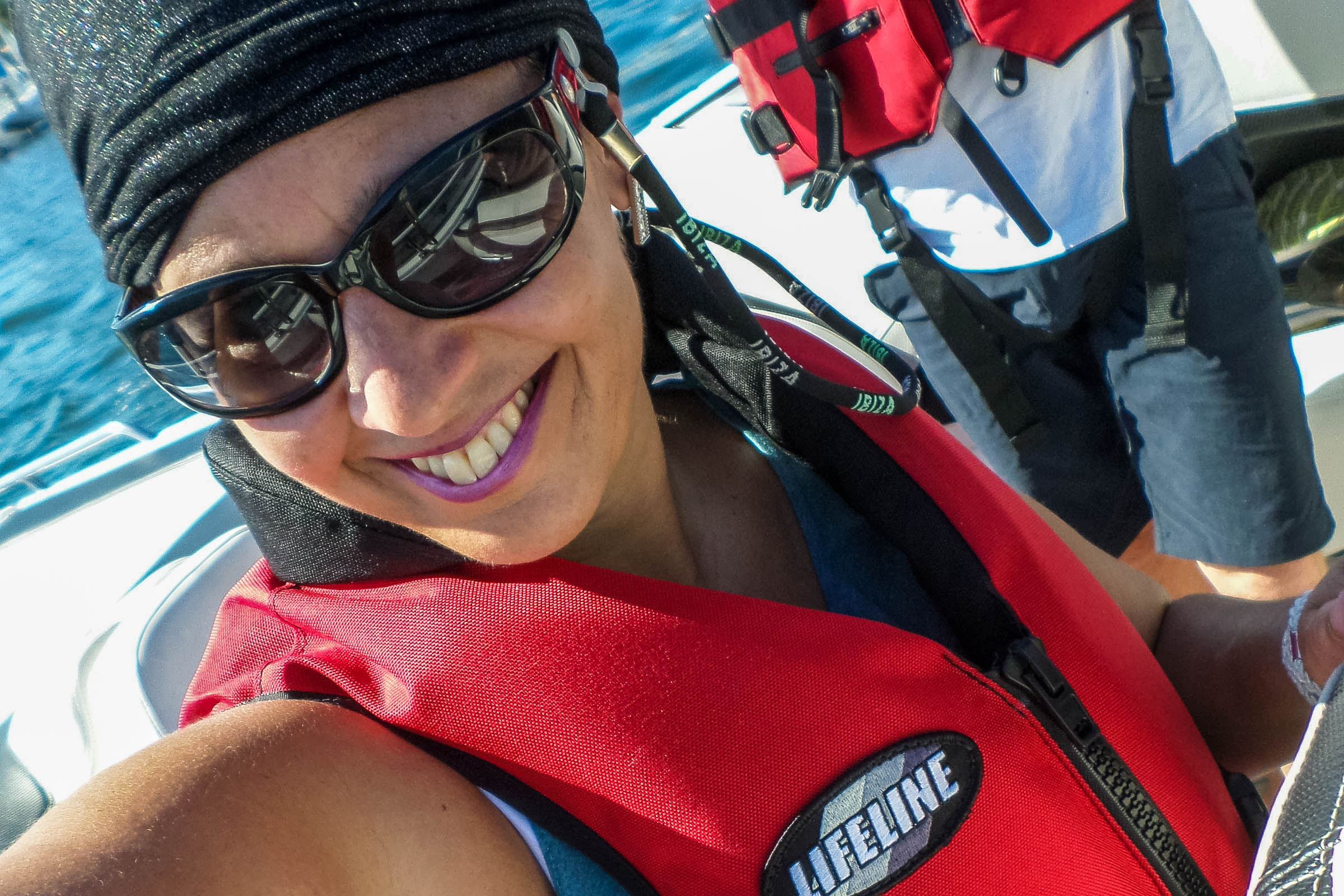 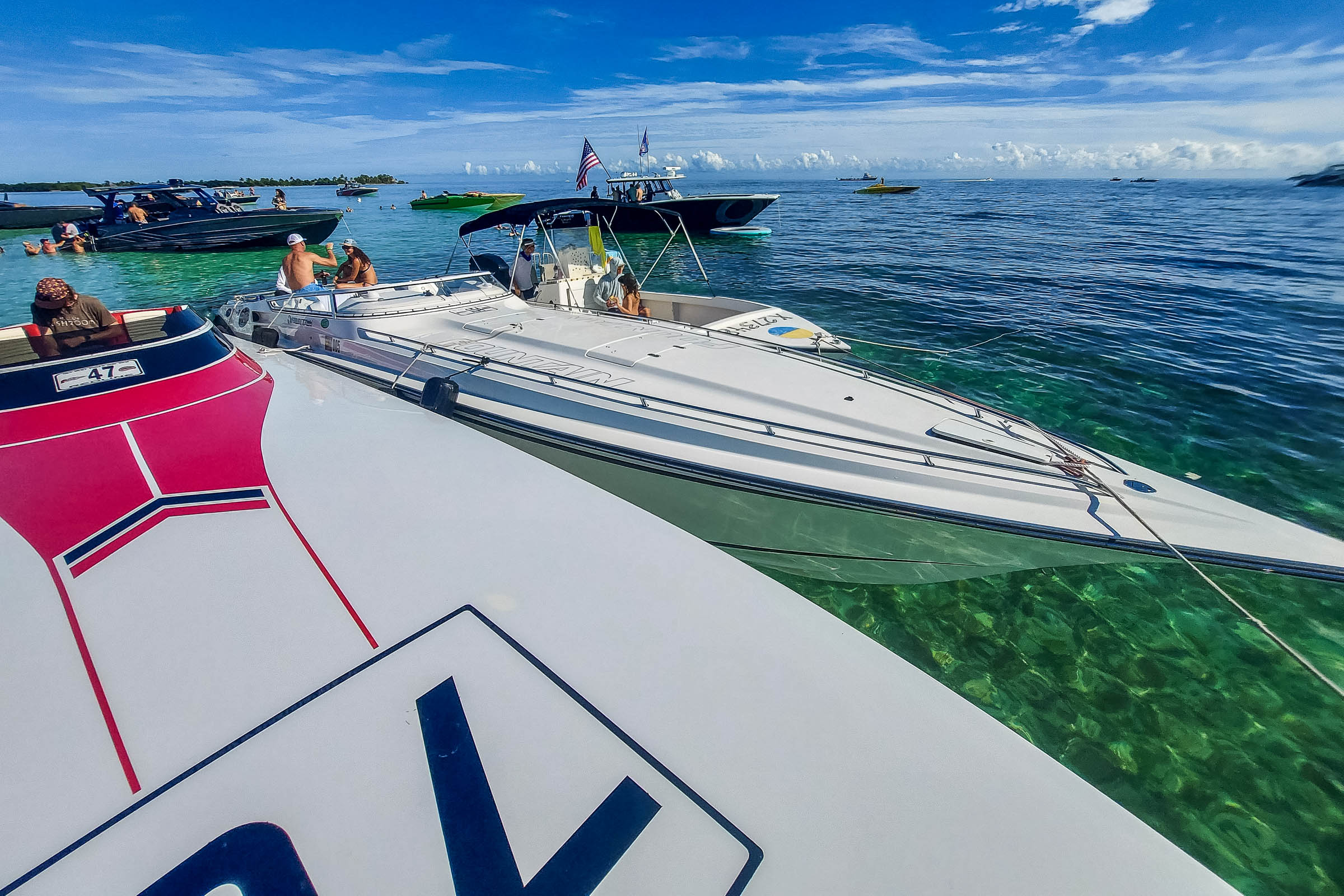 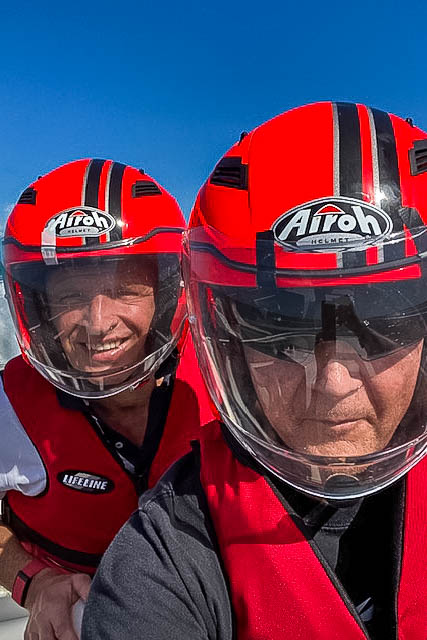 Doubling the powerboat pleasure, celebrating the convergence of old and new – both Fountains ran like wild banshees with booming surges of acceleration between the 1350s and 1550s doing their thing, while the boys respectively, had the throttles pegged prodding each other on. But when the high speed horseplay came to a halt, another absolute highlight to the weekend was ending the Woman Key celebration over a cooler full of stone crabs, personally opened for everyone by the stone-crab-cracking heroine, Inka Rodriguez Almeda, the daughter of the late Ramon Rodriguez from the famed Rusty Anchor restaurant on Stock Island. Inka, her husband Vince, and his mother Patty are dear friends of Robertson and turned the day into a slice of powerboating paradise. For all inquiring minds… all stone crab claws were smashed on the fishing center console, not the Fountains! 🙂 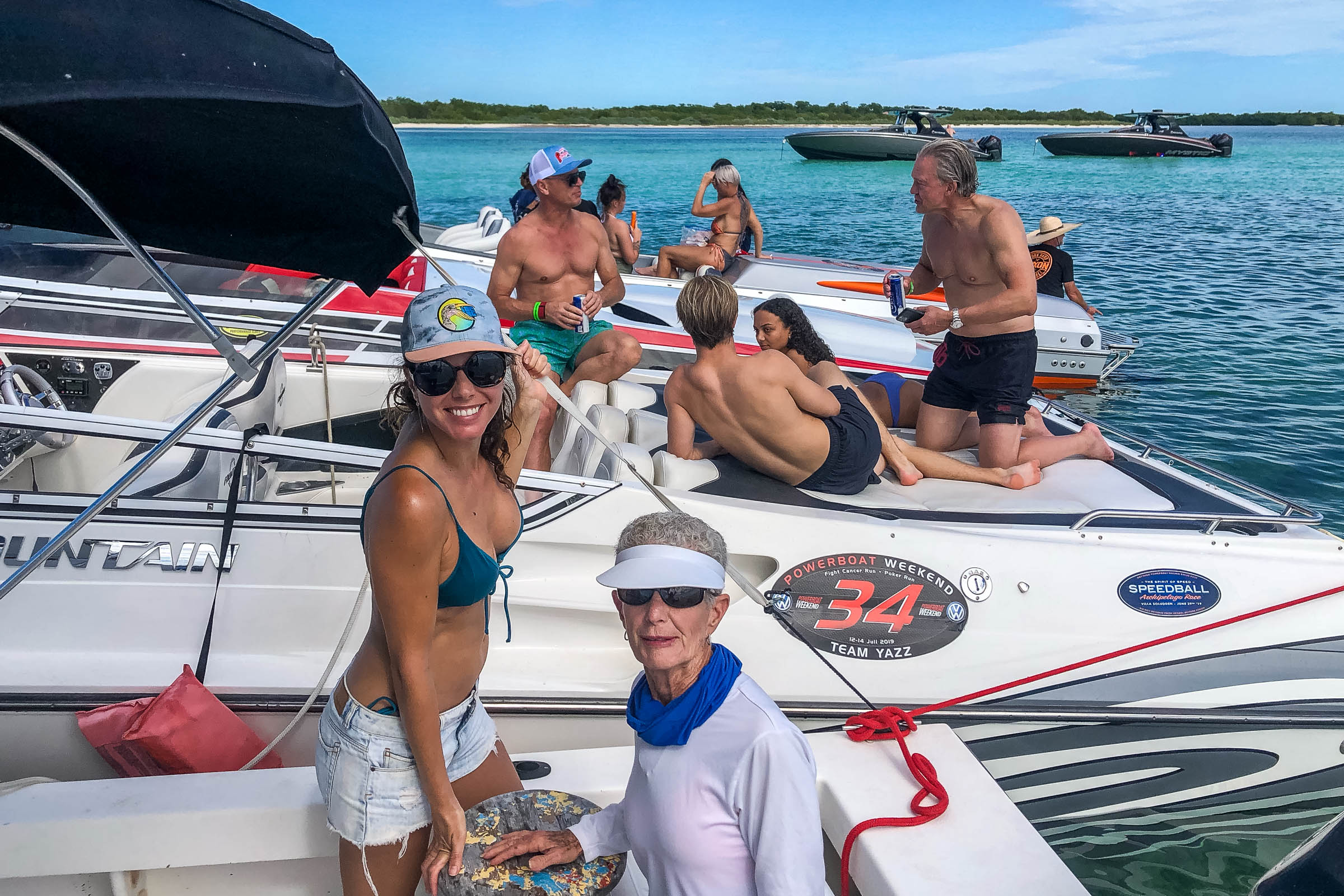 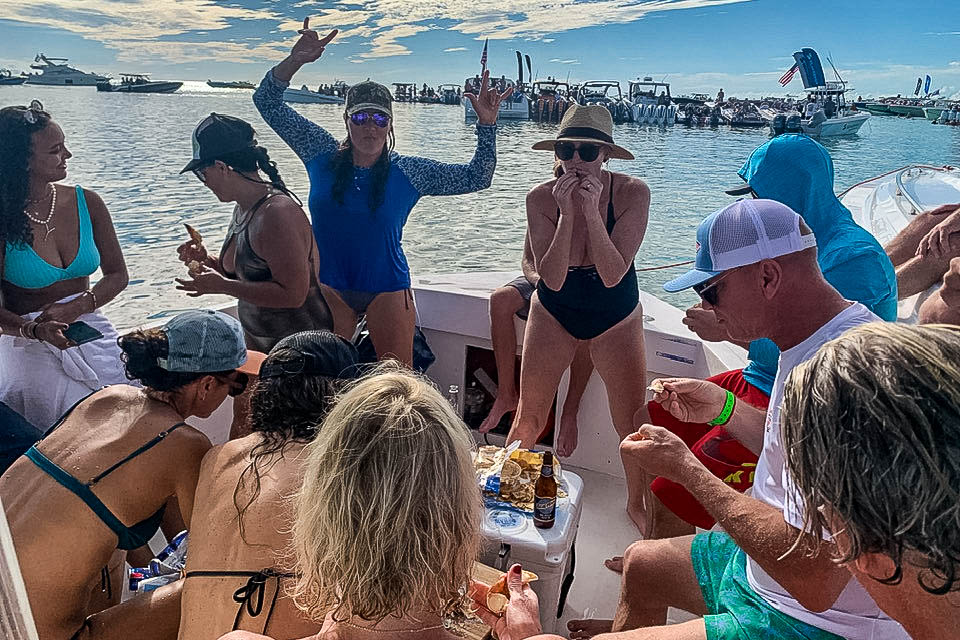 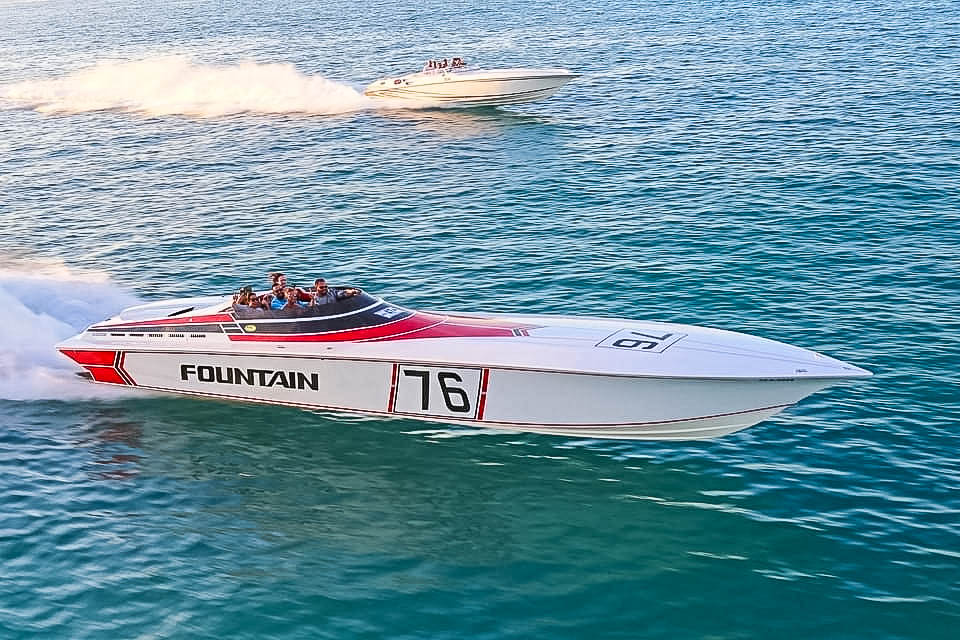 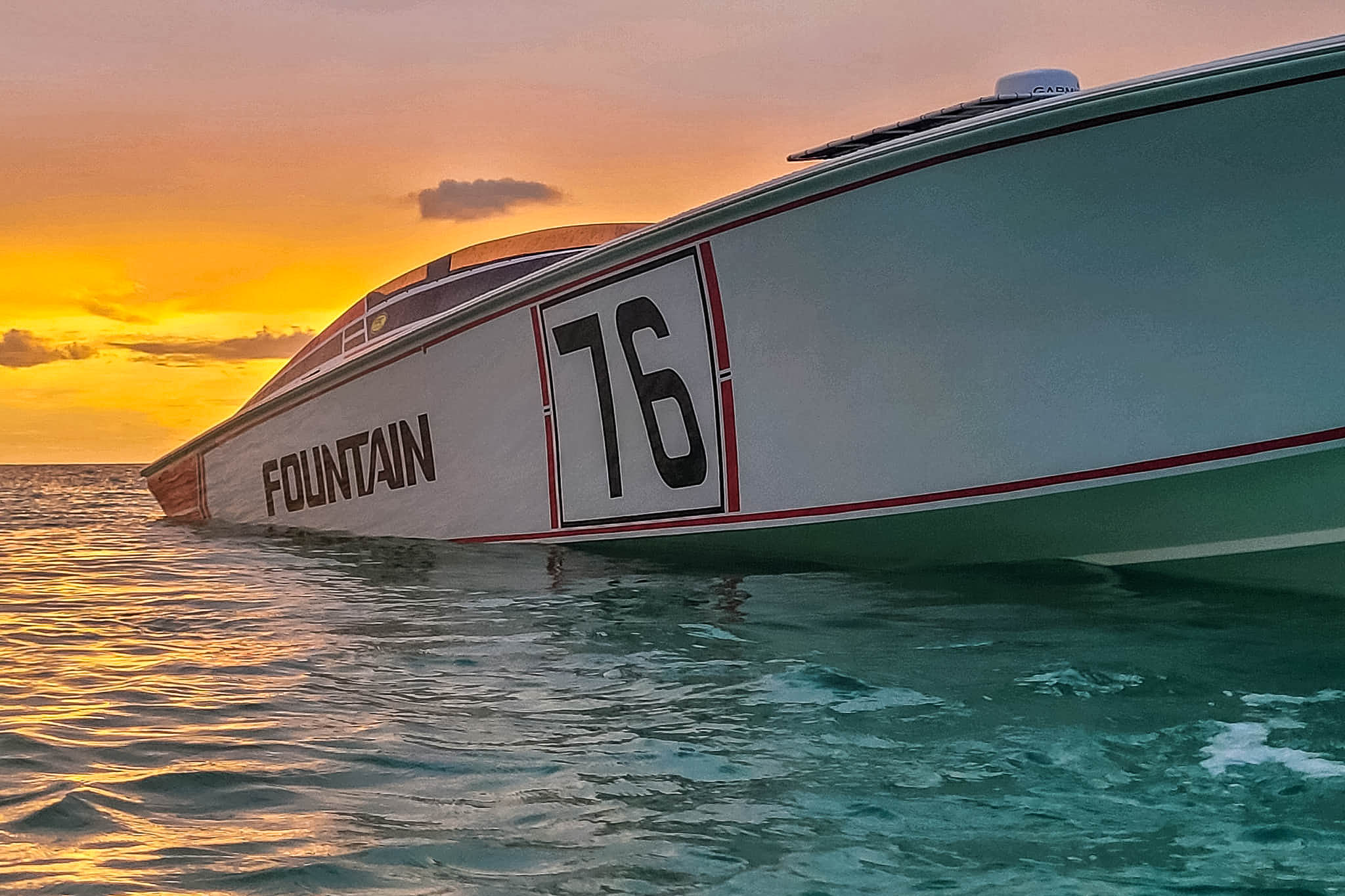