ERECTED, a second time over with extensive robust and sustainable design features to fight New York's gnarly gushing East River swells; and RESPECTED for its array of low-cost programs and activities allowing locals to interact one-on-one with the harbor – One°15 Brooklyn Marina is where contemporary meets community.

Due to the sadistic wave climate from the crossroads of two major rivers and the Atlantic Ocean, it hasn't always been smooth sailing for One°15 Brooklyn Marina. Within a year of the 2016 grand opening, the writing was on the (sea)wall for an overhaul. Its protective shield failed to reduce the impact of the turbulent tides plowing through the aperture underneath Pier 5 and Pier 6 and into the marina, and was only deflecting a portion of wave energy back into the river. 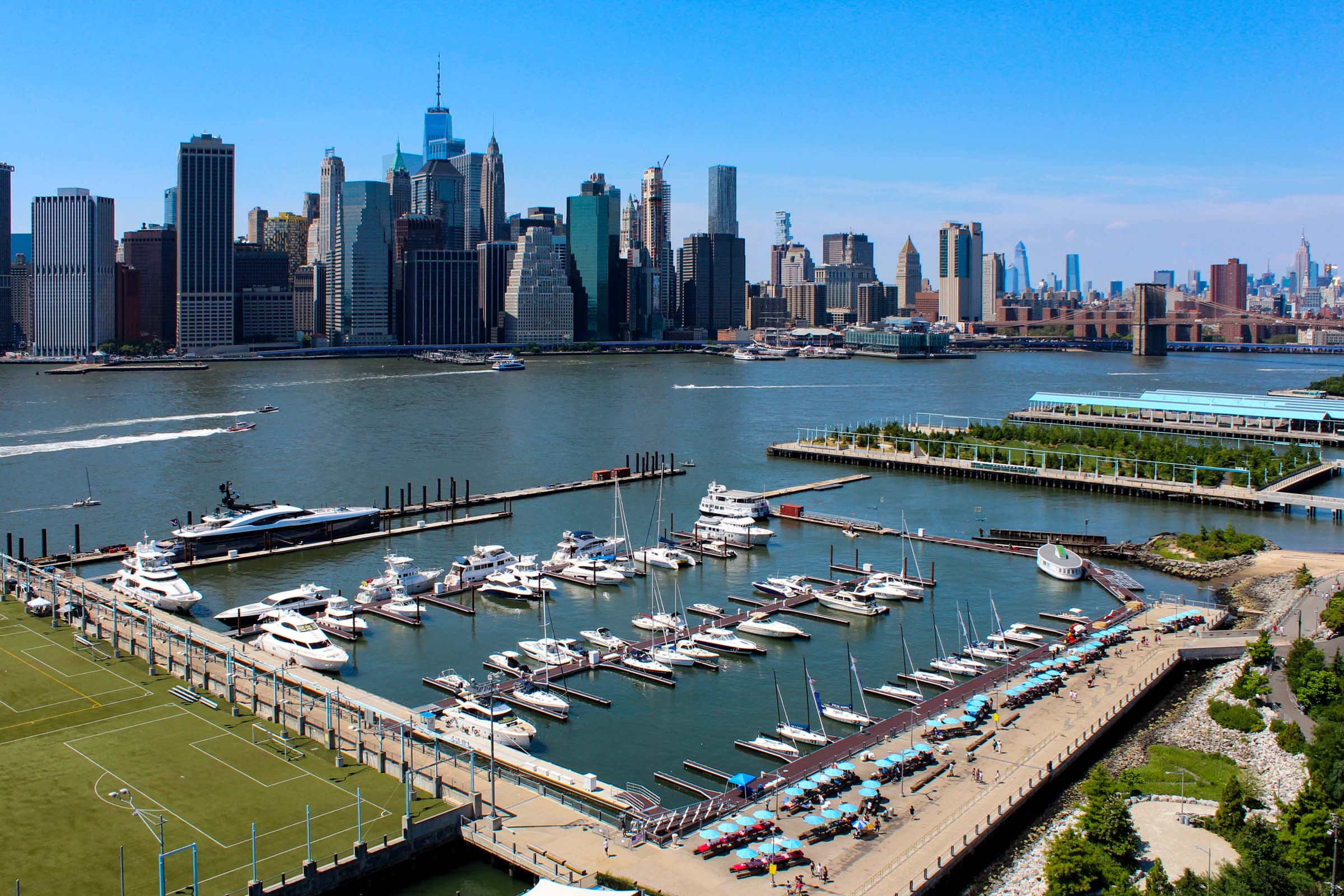 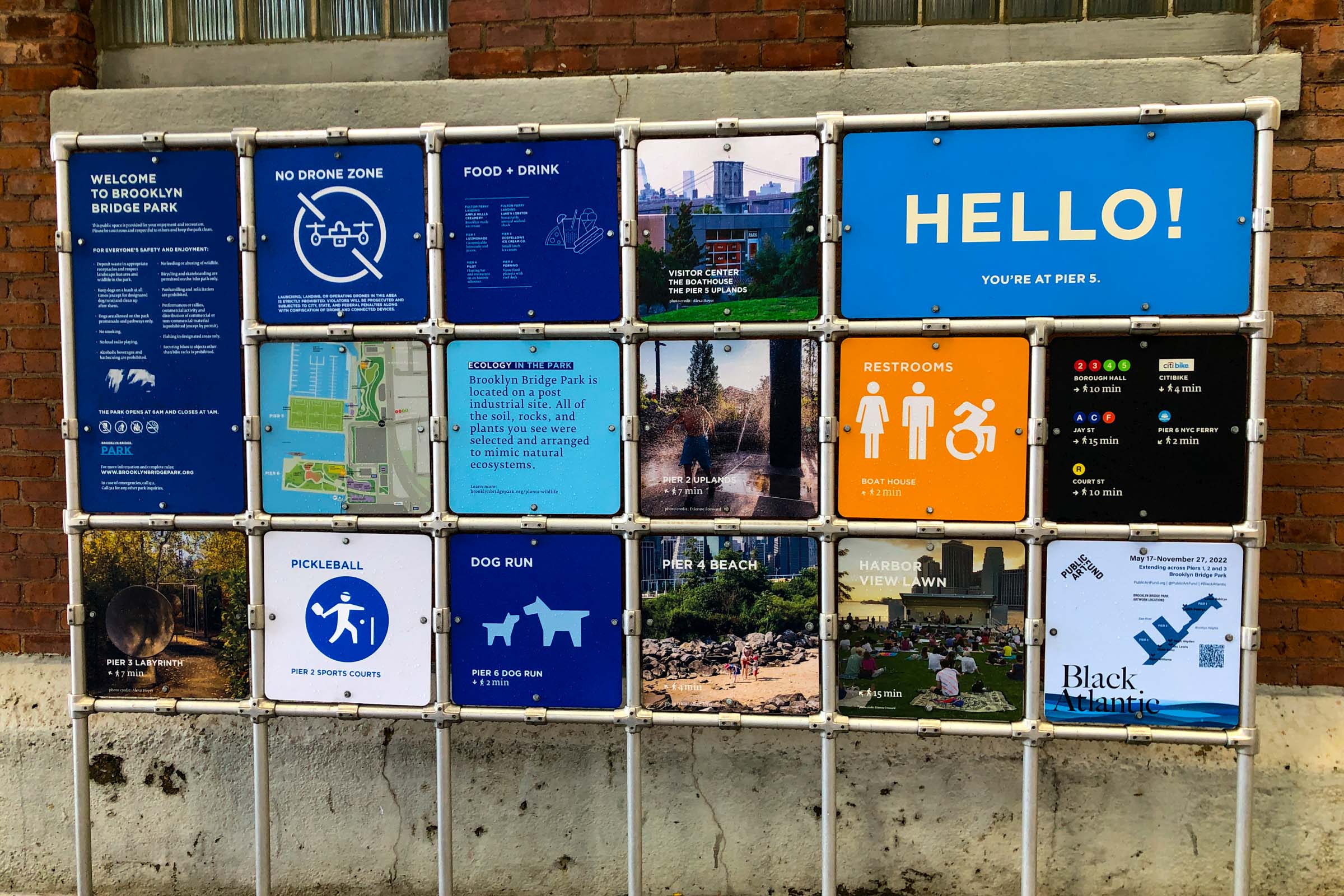 The mash-up of colliding currents picking up momentum (from the Hell Gate Bridge in Queens down past Governors Island and the Verrazano-Narrows nearing the Atlantic) was similar to a tidal strait, only massively amplified by the muddle of moving crafts packing the highly-trafficked waterway, each creating its own distinct path with differing departure and arrival turning points.

You name it; the East River’s got it – tug boats and commercial freighters chugging along; recreational sailing vessels and motorboats parading behind the crowded tourist cruises; and jet-skiers chasing the biggest chunks of chop, with no sense of rhyme or reason for following a straight course. Next, toss in the NYFD and NYPD dashing between destinations and the non-stop helicopters hovering above shuffling hot-shots and higher-ups to their NYC workplaces and affairs.

Though, the true "turning point” in this maritime mayhem related to the increased frequency of the high-speed commuter ferry services which took route in 2017, adding to the existing Seastreak fast ferries. This signified more traffic... and ultimately more trouble for the marina.

This summer, while at Pier 5 for our destination story on Pilot, Brooklyn’s historic schooner floating bar, I saw firsthand the insanity of this stretch of sea; I also experienced its wrath from across the way on the Manhattan side at South Street Seaport. Talk about aquatic sensory overload, your eyeballs do non-stop 360s spinning left, right, up and down trying to take in just how much is happening in the harbor at any given time, as seen in the examples below. 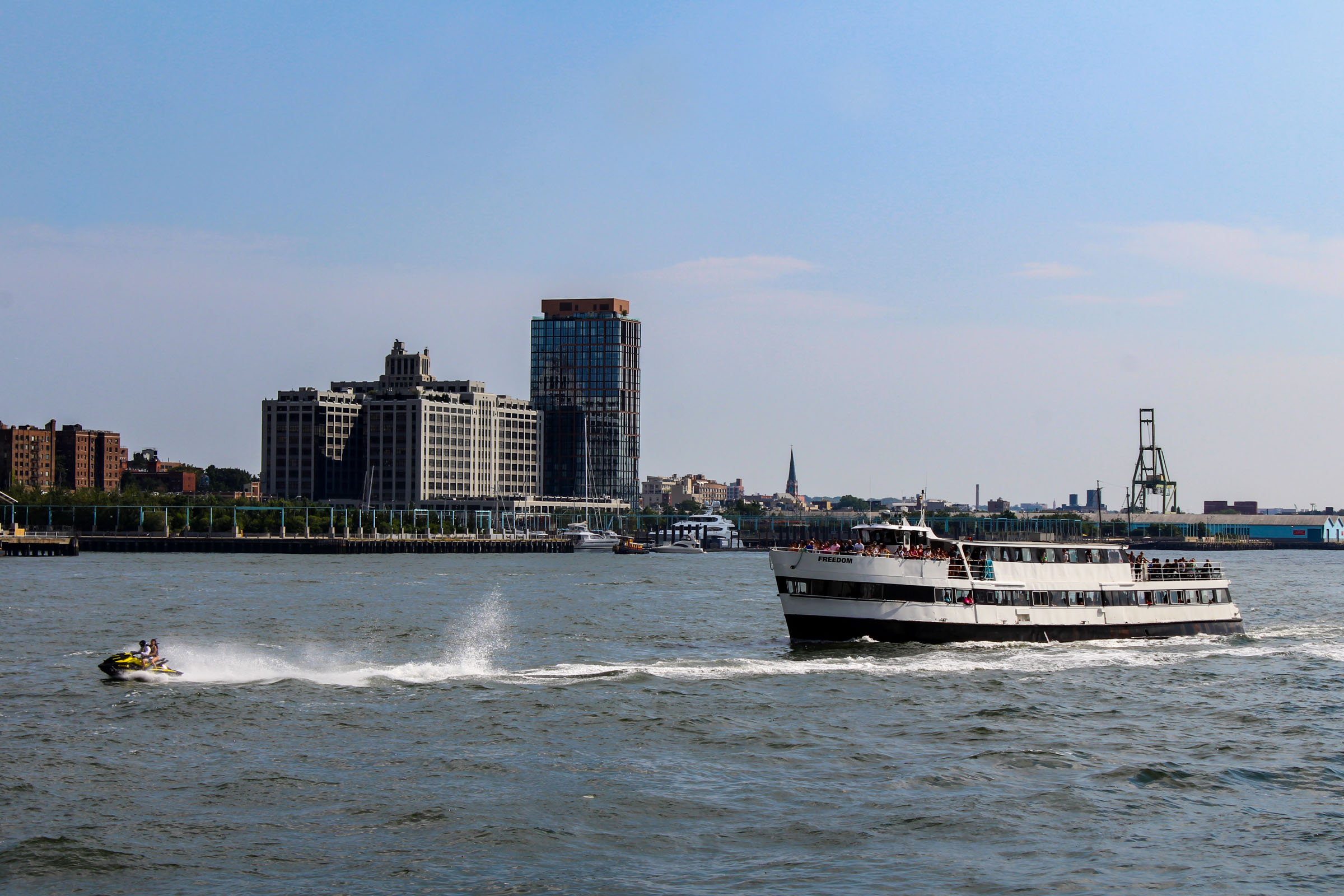 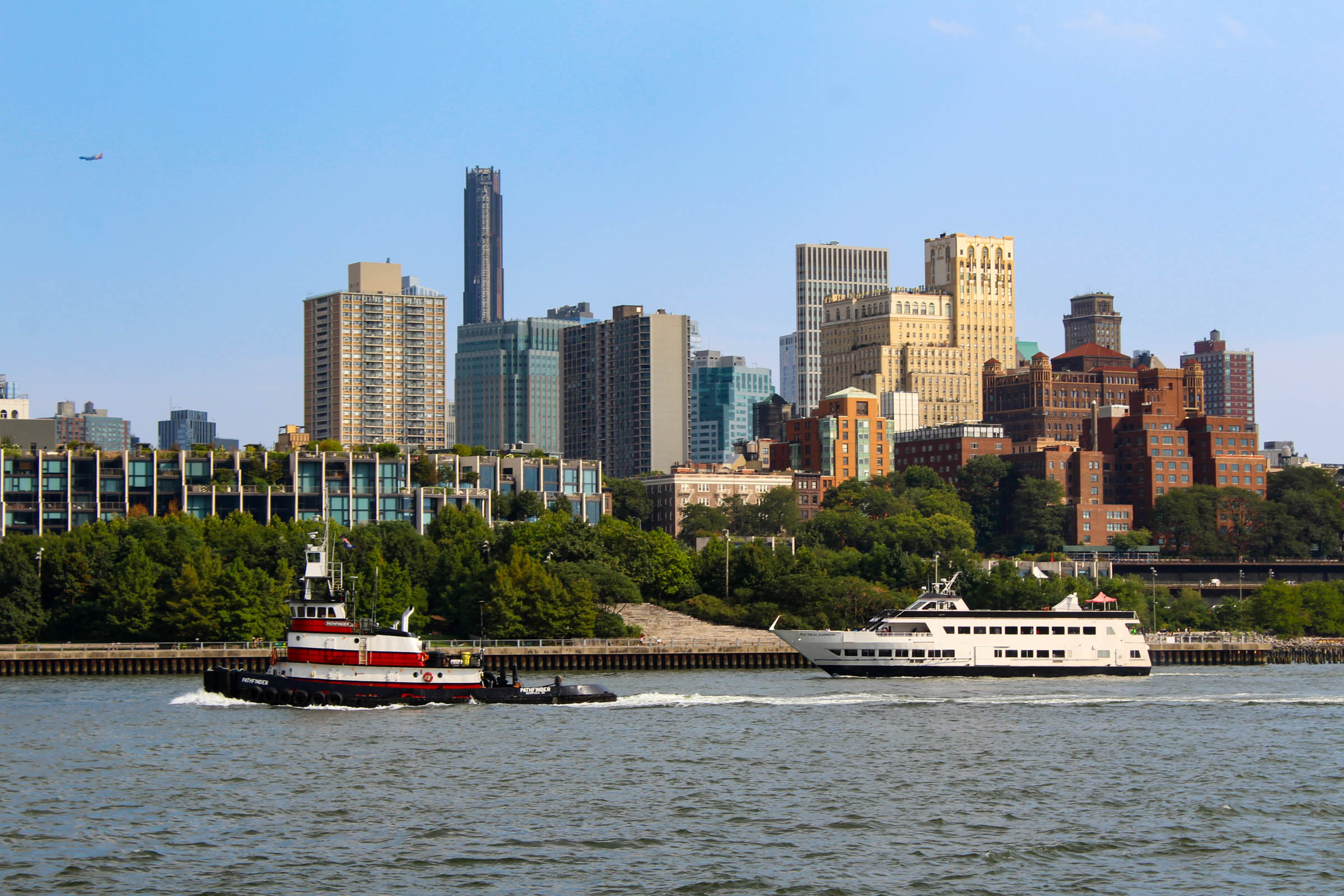 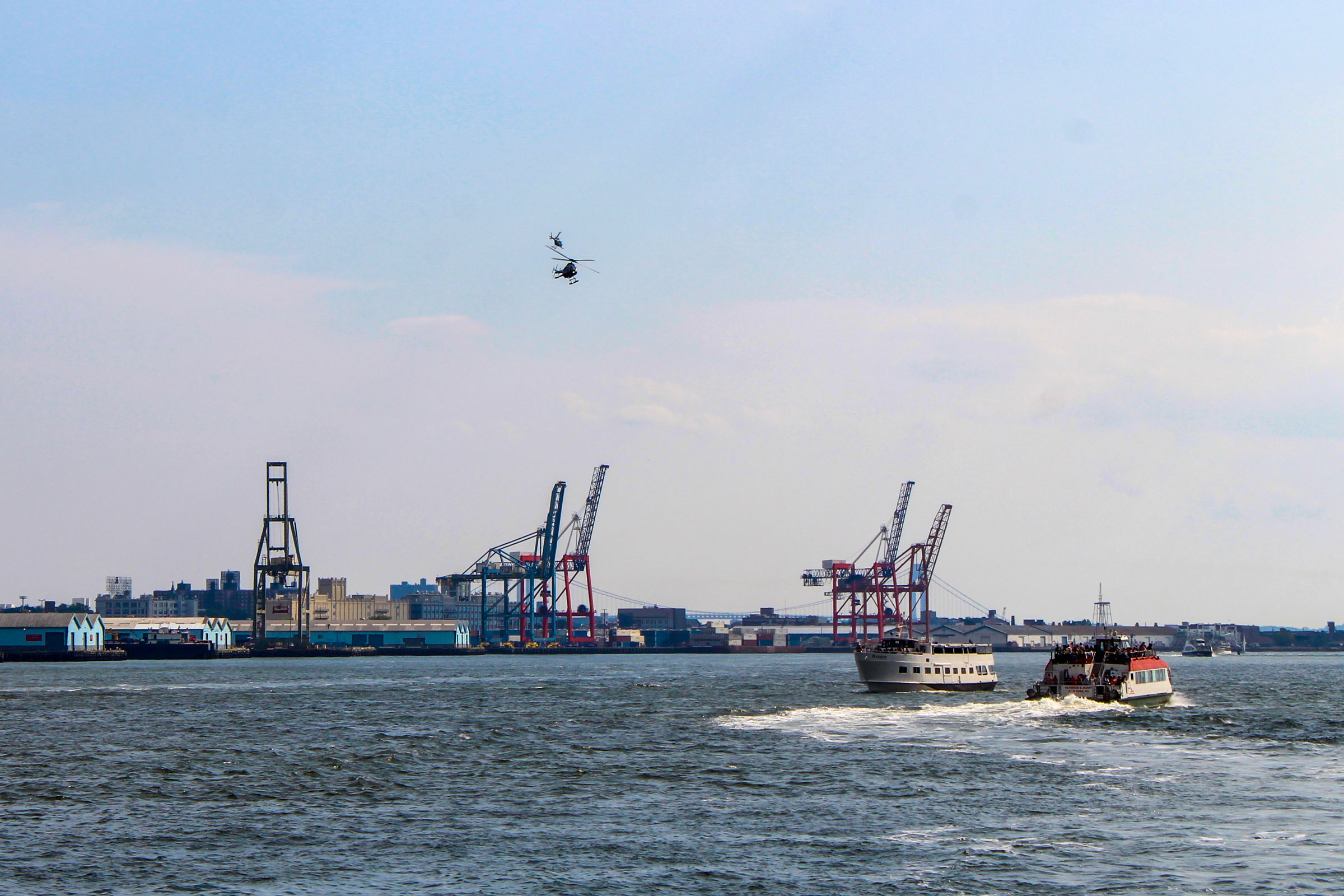 Saved by the Steel

As a result of the engineering team’s high-tech analysis and meticulous modeling tests on how best to combat the volatile conditions – the answer was found in ferry landings and their usage of steel wave attenuators set on deep draft steel barges. This combination cushions the marina basin with a gentler undulation from the diminished size and energy of incoming swells and elimination of unnecessary wave movement.

Estelle Lau CEO tells me, "We initially designed the marina using all Seaflex anchoring but found that the increased boats and ferries on the waterfront were too powerful for the system.  So we built the new attenuators using the same concept as the New York ferry landings, putting piles in to further strengthen the system – doubling the width and tripling the depth of the attenuator."

The consulting firm TMS Waterfront and Singapore-based SUTL Group (known for giving life to an array of  gorgeous Asian marinas from Malaysia to Thailand), were tasked with reconstructing the eight-acre gateway to Gotham, which today comprises 102 slips accommodating watercrafts up to 300 feet including deep draft ocean-going superyachts.

Yielding nothing but praise and positive results since re-opening in May of 2019, the $28 million dollar multi-phase design project was met with a stream of challenges:

2- Disruptions to the summer operations at the marina needed to be minimized.

3- The position of the R subway train running under the facility required a reduction in piles near the tunnels and prevented the use of anchoring and cables.

4- Taking all precautions to avoid the impact area of the tunnels, during the pile driving along the attenuator, a sophisticated monitoring system had to be installed.

Resilient in handling the compulsory rules and restrictions mandated throughout the imposing infrastructure refurbishment – the engineering crew first repurposed the large concrete blocks initially installed to anchor the docks to the bottom of the bay, by moving the attenuation wall to the inside dock on the marina's south side. Next, three colossal steel barges fabricated by Texas-based Sterling Shipyard were secured to the seabed. The attenuators – put in adjacent to the tunnel – were ballasted down on piles driven into the bay. The two 185-footers were tagged as Little Bear One and Little Bear Two, and Polaris was the mac-daddy 300-footer with a 30-foot beam and 10-foot draft. 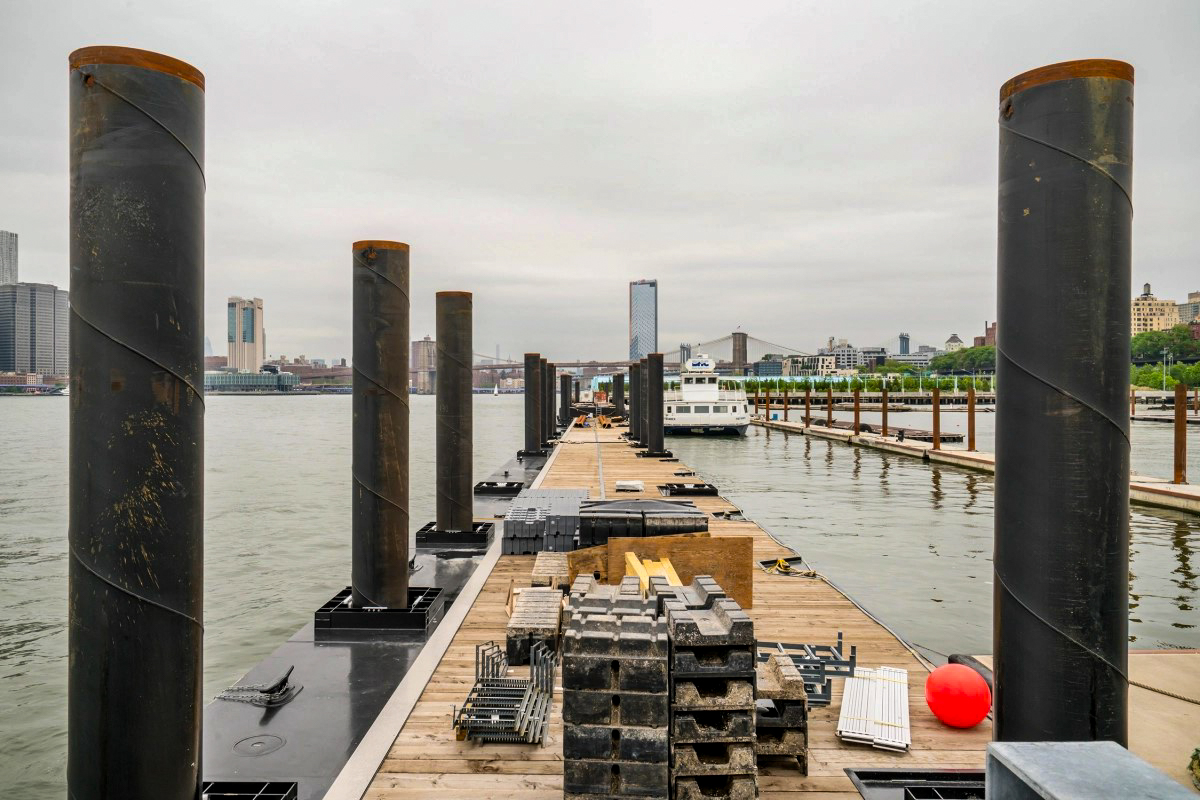 Another defining achievement of the high-profile project was preserving the aesthetic beauty projected from the backdrop of the Big Apple’s south side thanks to careful placement of the pilings, as to not obstruct the open area. But the view is not the only thing to celebrate; today, the harbor is accessible for all to navigate, as a boat owner or not, given that the marina is home to the Community Dock.

Thanks to the expansion of the Brooklyn Bridge Park, the Community Dock was designed to include recreational and educational activities and features a membership-based sailing club with both cruising and racing programs. Generous club volunteers also give back to the neighborhood by taking organized groups out on the water. What’s more, Marina Services contributes two percent of revenues to support the free and low-cost local access programs for non-motorized activities.

The whole waterfront promenade is a slice of heaven in the midst of New York's congested, and at times, majestic mayhem. Praised for its wide range of relaxing and engaging offerings satisfying everybody from health nuts to hedonists, there’s a multi-purpose synthetic turf field with an organic infill made of sand and coconut fibers, a picnic peninsula complete with BBQ grills, a fishing station equipped with bait preparation tables, and fields of flowers and lush vegetation with native plants and trees encouraging absolute tranquility. The piers bring so much cheer; it's hard to imagine they used to be filled with clusters of storage facilities and shipping containers.

For all your nautical needs at One°15 Brooklyn Marina, check out the following websites for detailed information or to make reservations: 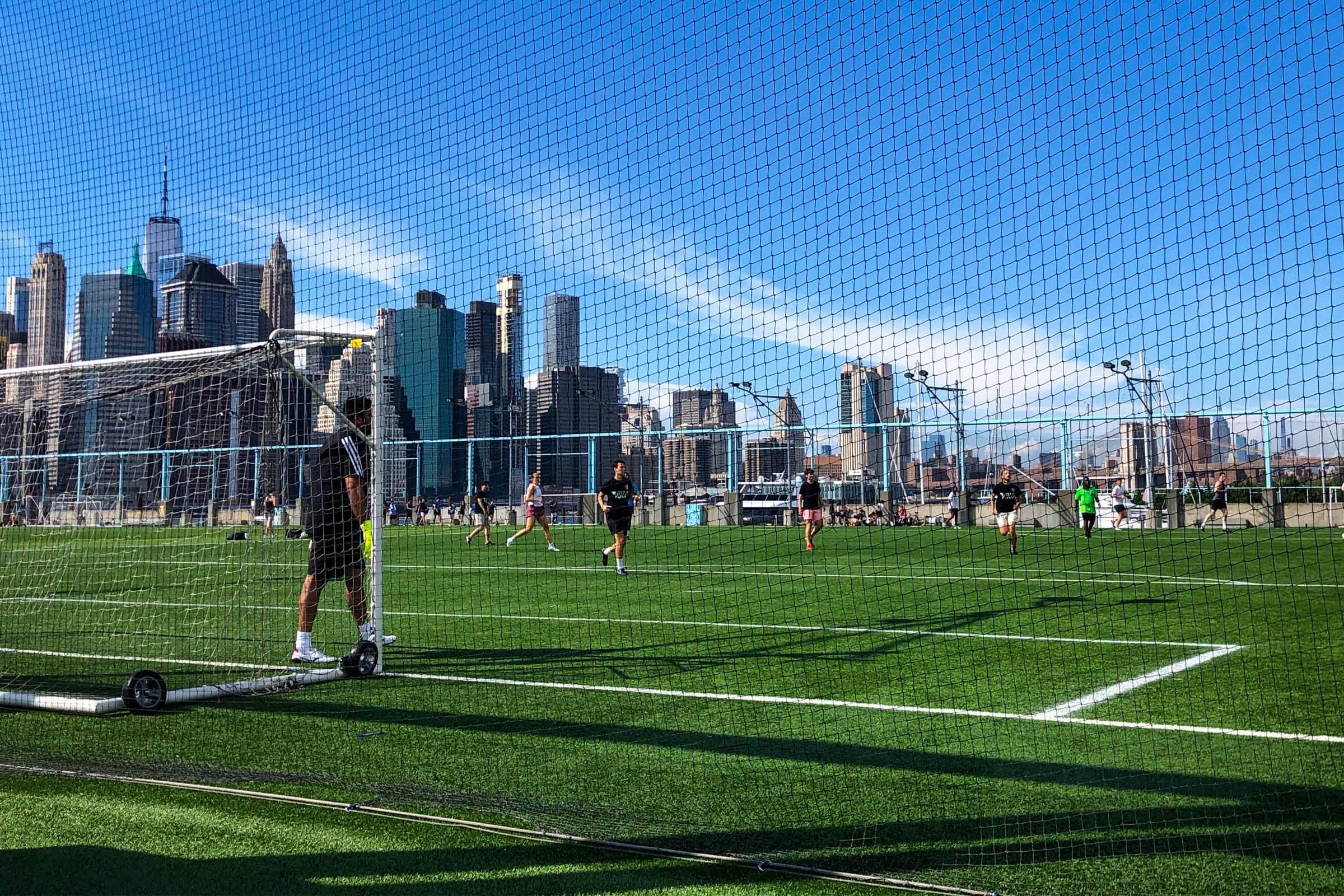