The best part of my four days of frolicking around the 2021 Palm Beach International Boat Show (PBIBS) was bumping into my "something OLD and something NEW" decorating the docks among the sprawling super yachts and consortium of classy crafts. Raising more than a few eyebrows was the revamped and currently up-for-grabs 2005/2017 Magnum Purely Pleasure; and a few docks down… serving as a first impression for what's to come sat the three-foot glass-cased rendition of the 46' Pininfarina-designed Buddy Davis luxury center console slated for release by year's end. 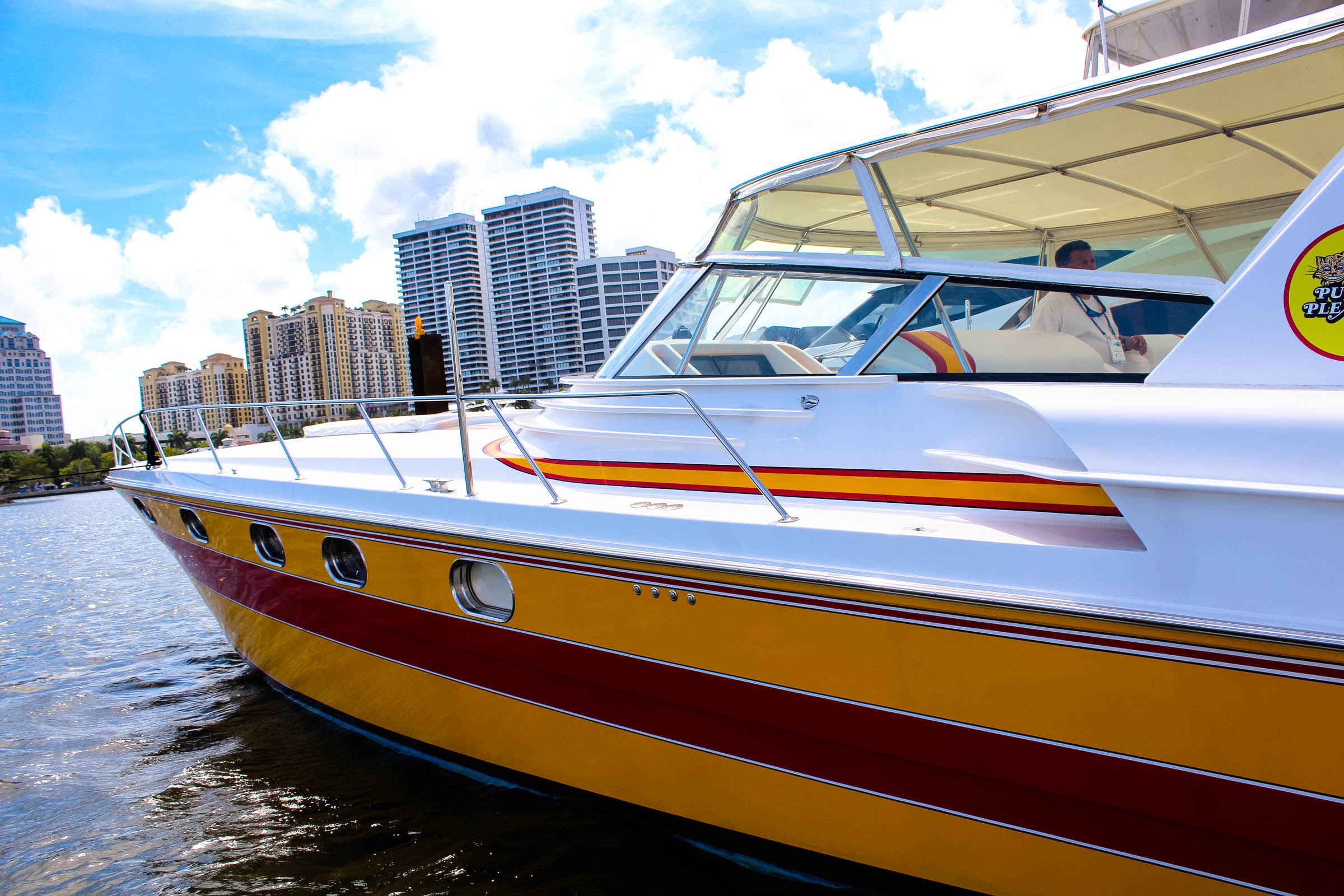 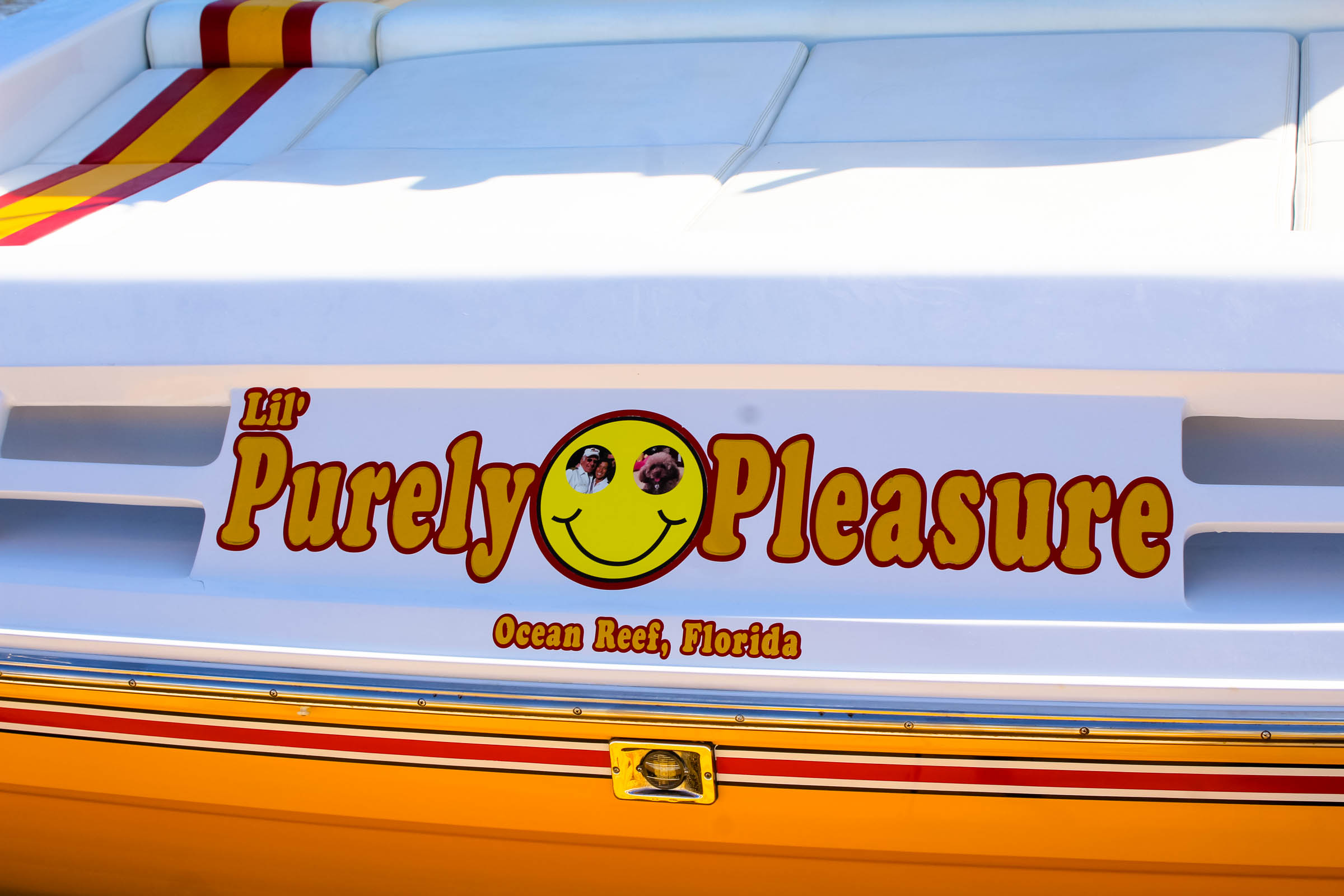 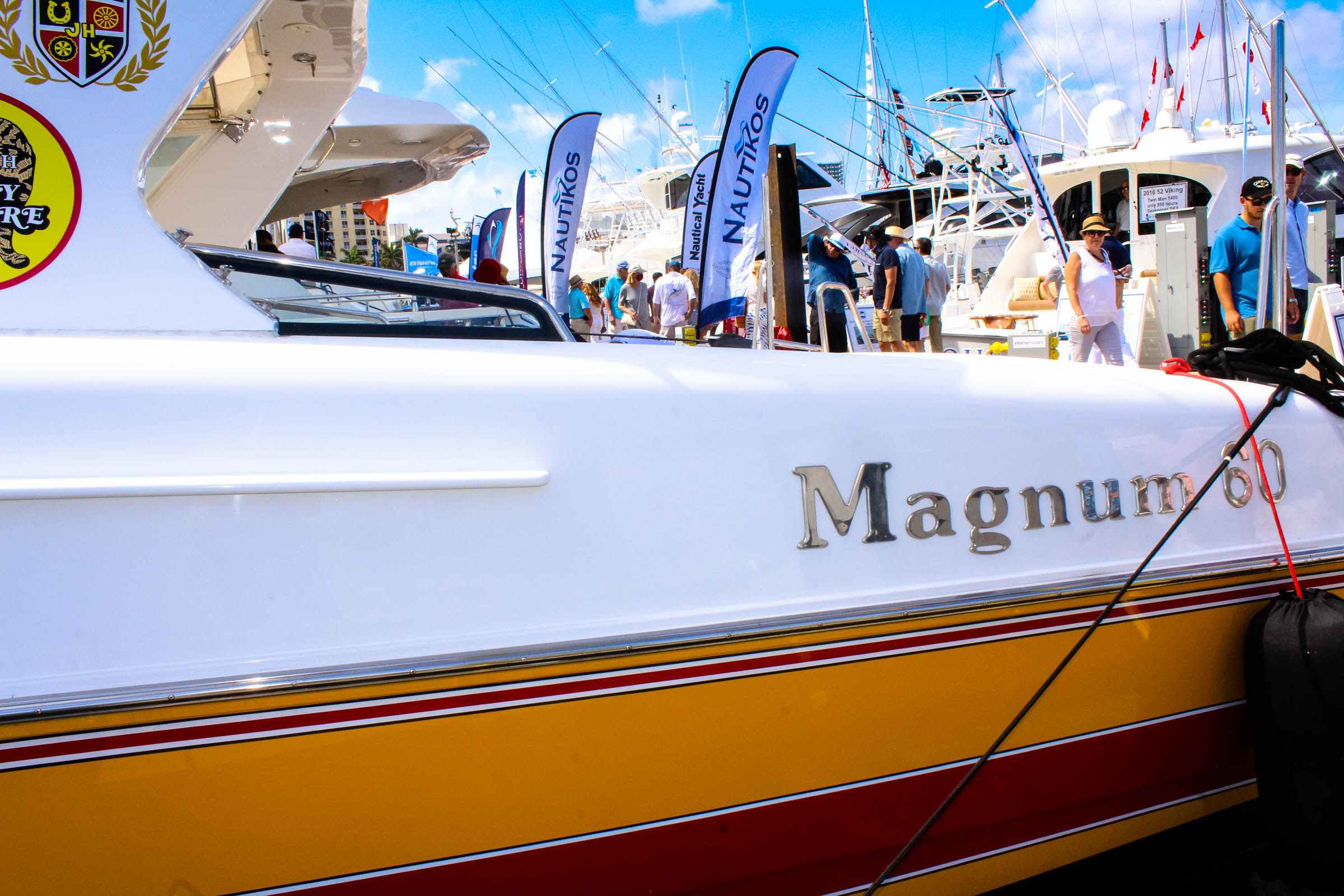 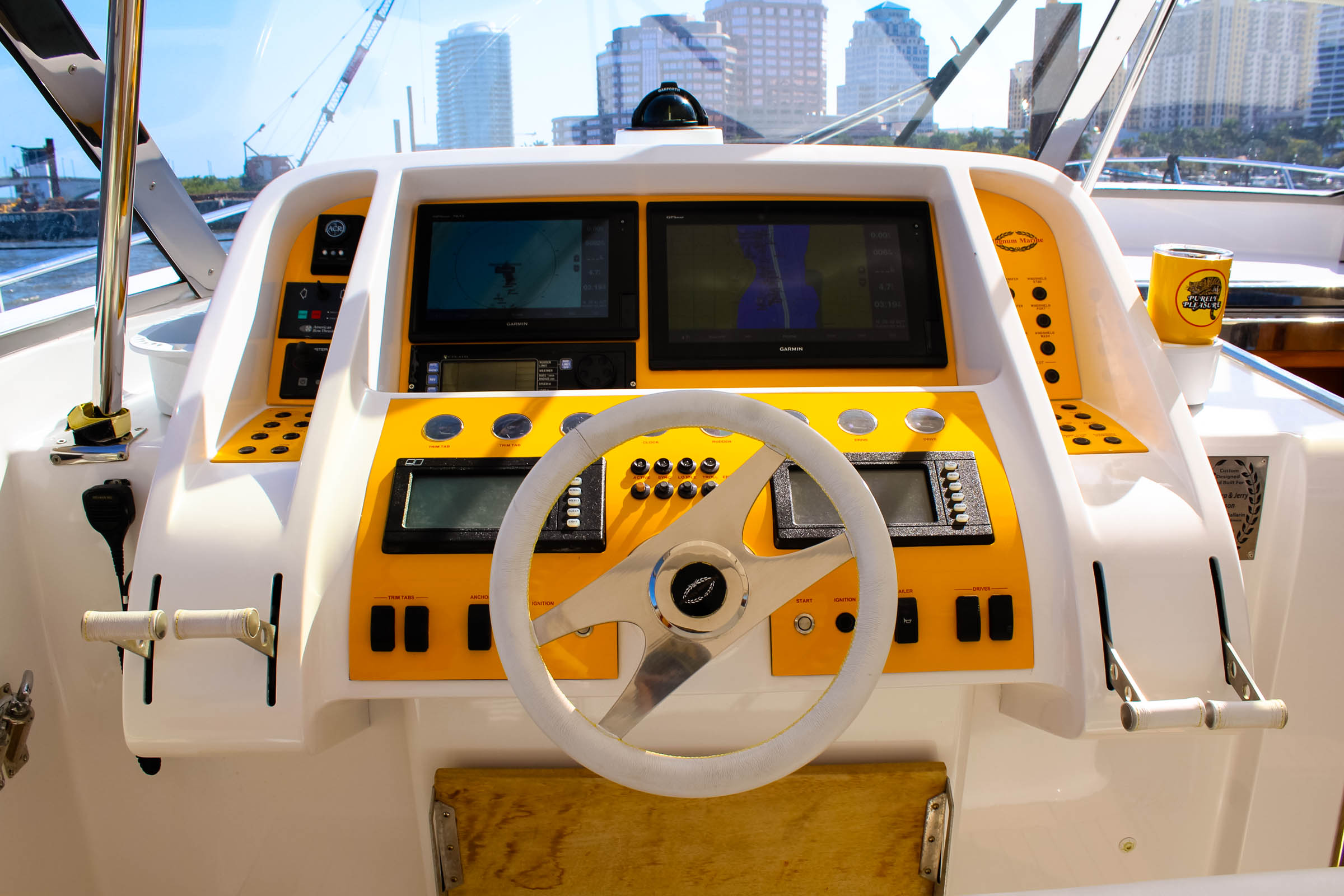 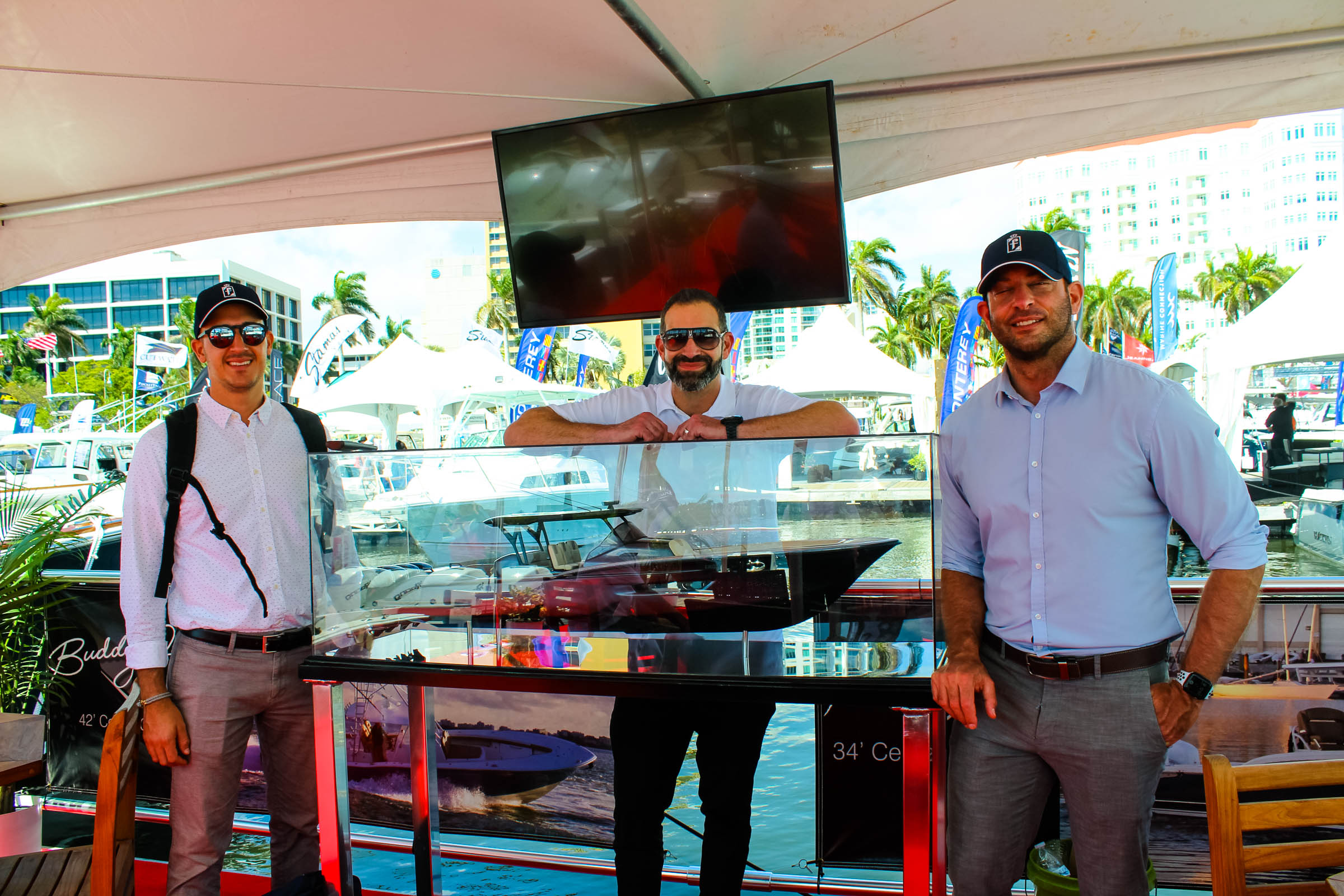 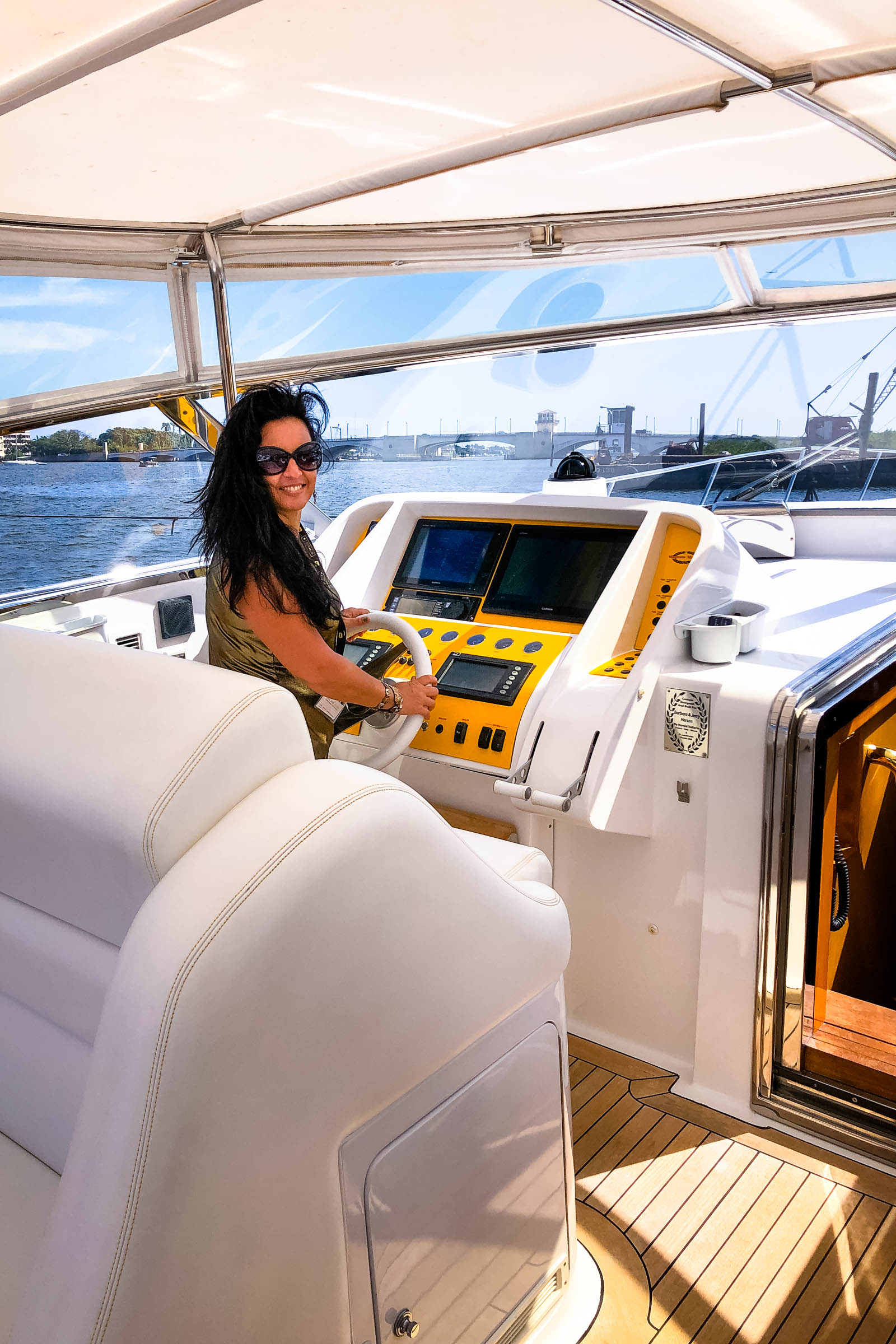 As an offshore racing diehard, hearing or seeing the word Magnum, it is second nature for Aronow’s original 27’ Maltese Magnum to pop into my head before other bearers of the same moniker such as a .357 Smith & Wesson or chocolate-dipped ice cream bar. So to my surprise, the 60-foot Magnum slotted in an end slip by the Denison Yachts collection stood out like a hooker in Home Depot, that’s to say – the yellow and red "looker" lit up the landing of overwhelmingly white hulls. Making my first discovery even better was an invite on board from captain Chris Parlin for a tour and tell-all about the owner Jerry Herson’s marvelous masterpiece, after he noticed me maneuvering my way through a maze of electrical cords at the edge of the pier for some pictures.

For the Maryland-born Herson, 63, 70, 85, 60 and 46 are not his winning lottery numbers, but rather the sizes (in order) of his go-fast mega yachts, all easily identifiable by his joie de vivre maxim Purely Pleasure sketched along each stern, and the distinguishing stroke of the brush in the symbolic colors of Maryland's flag – paying reverence to his home state where the businessman achieved his life's successes as the proprietor of Herson’s Honda and Kia car dealerships in the Rockville region.

The 60' saga started a few years back when Herson had the idea to downsize from his gargantuan 85’ Magnum boatdozer (the biggie in the photo below next to the 60’) and get back to his roots with something a bit smaller. One of only eight produced, Herson found it Athens, Greece. He flew to Europe for a meet-and-greet and fell in love with the boat. Purchased in December of 2016 and picked up in Savannah, GA, in early 2017, the Magnum was then placed in Fort Lauderdale for its multi-million dollar cosmetic and mechanical makeover including a complete re-wire from European to United States standards.

The first step under the direction of project manager Harold Ballarin, was rounding up a few of the Magnum Marine guys in the Fort Lauderdale area who were out of work. The second step was a year and a half of laboring which included everything from gutting the inside and installing new upholstery to repainting the Magnum. The end result was a highly customized, contemporary interior adorned with ostrich skin, marble, hand laid cherry wood flooring, gold plated sinks, onyx back lighting in the master head, and a full size refrigerator in the galley. 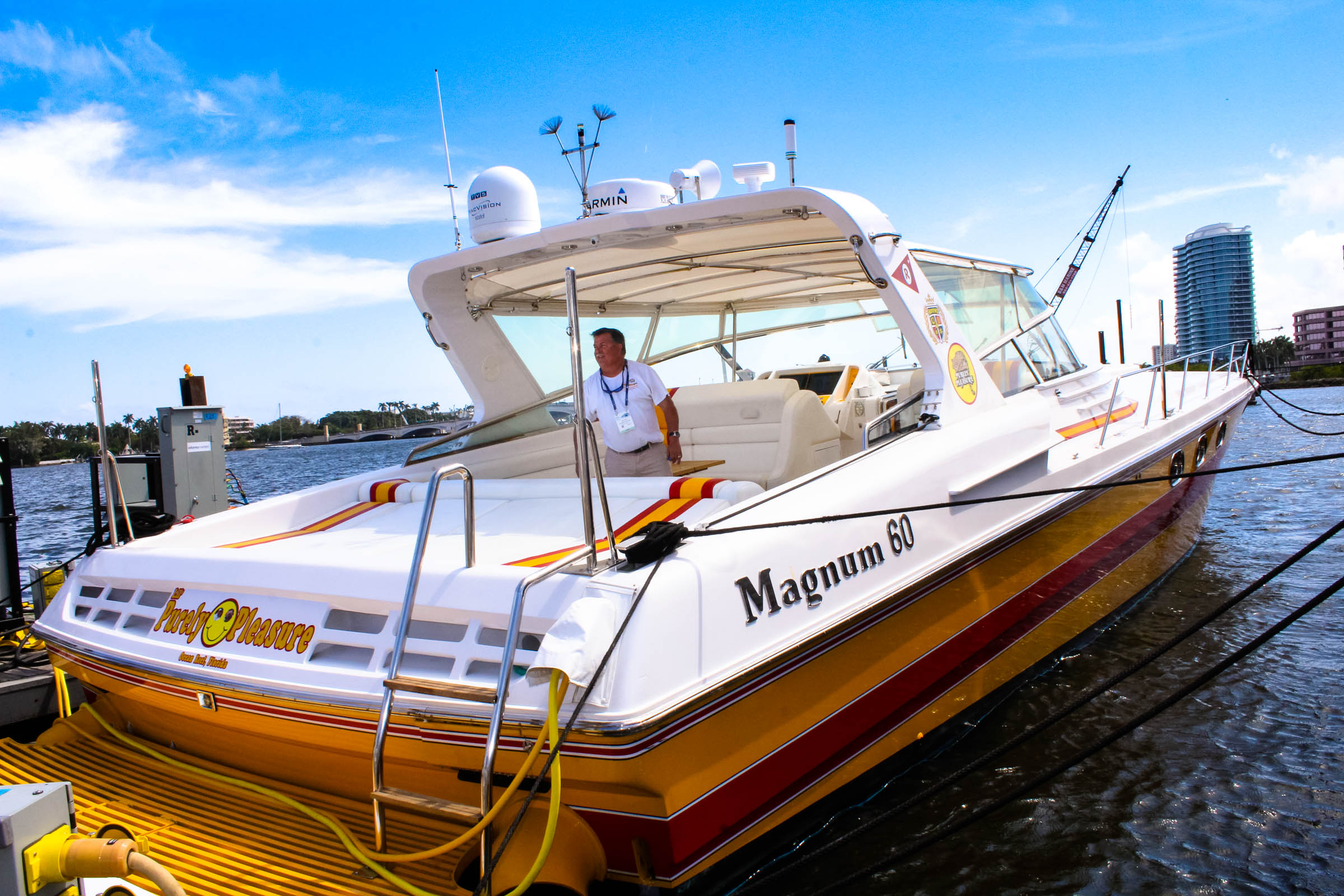 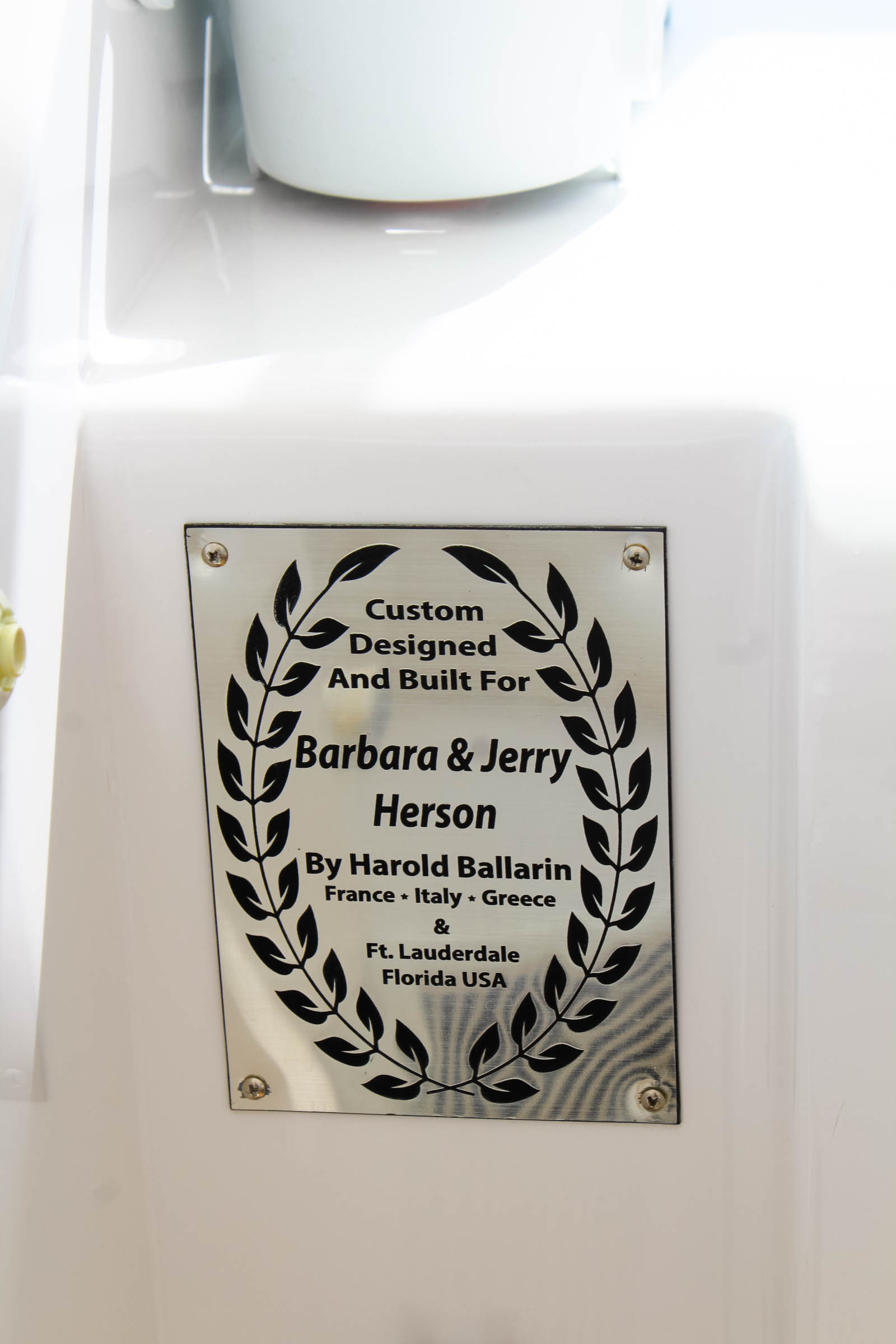 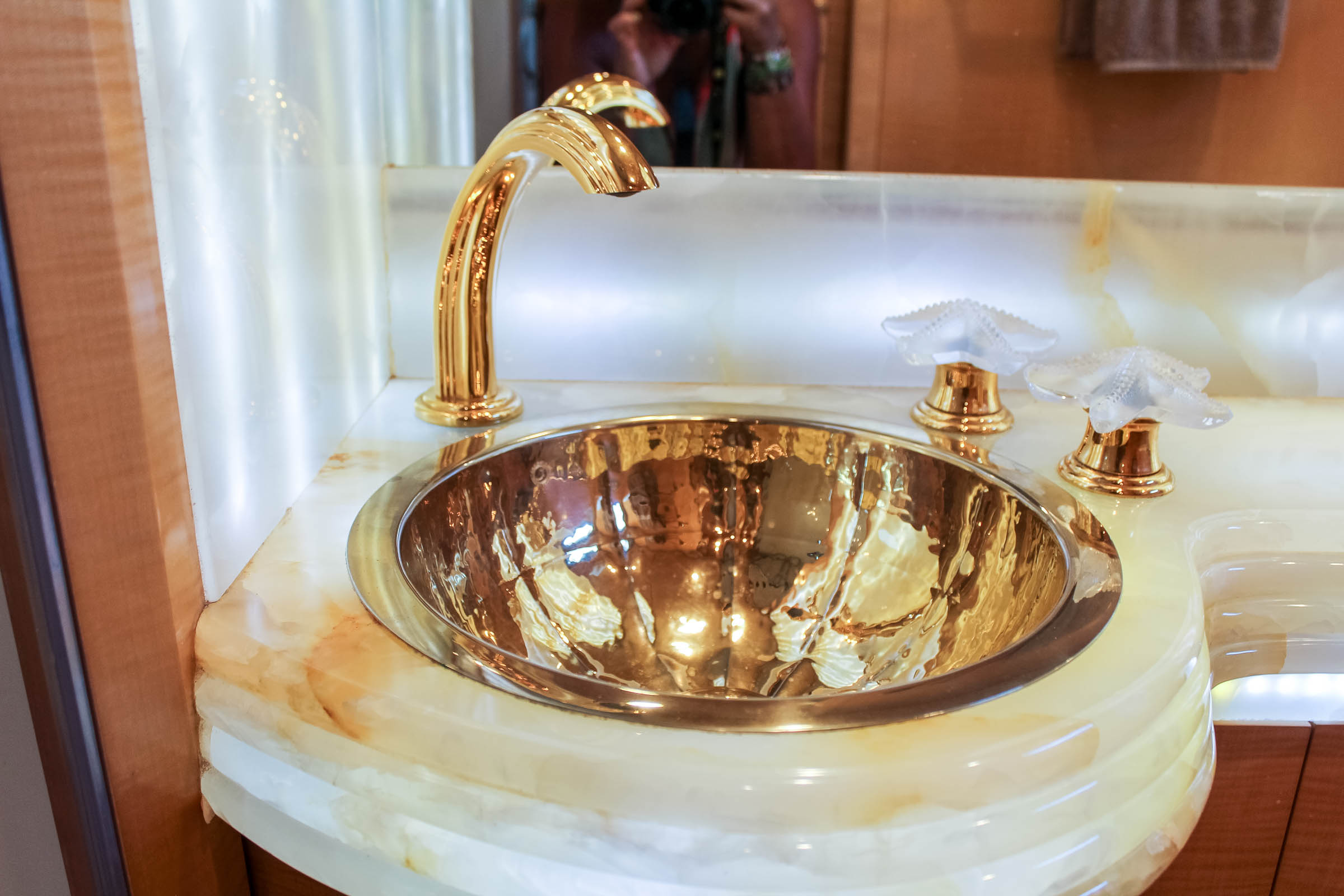 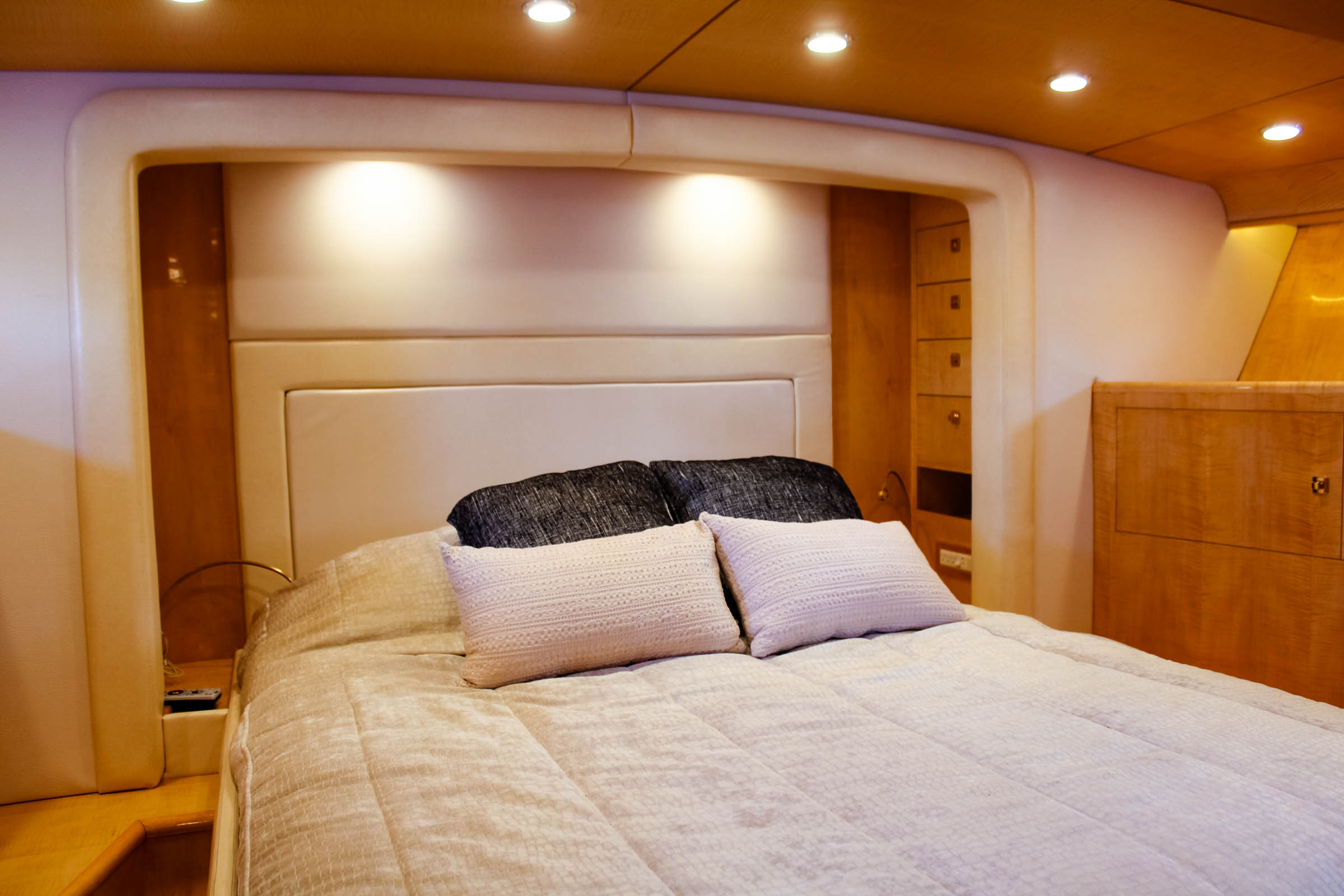 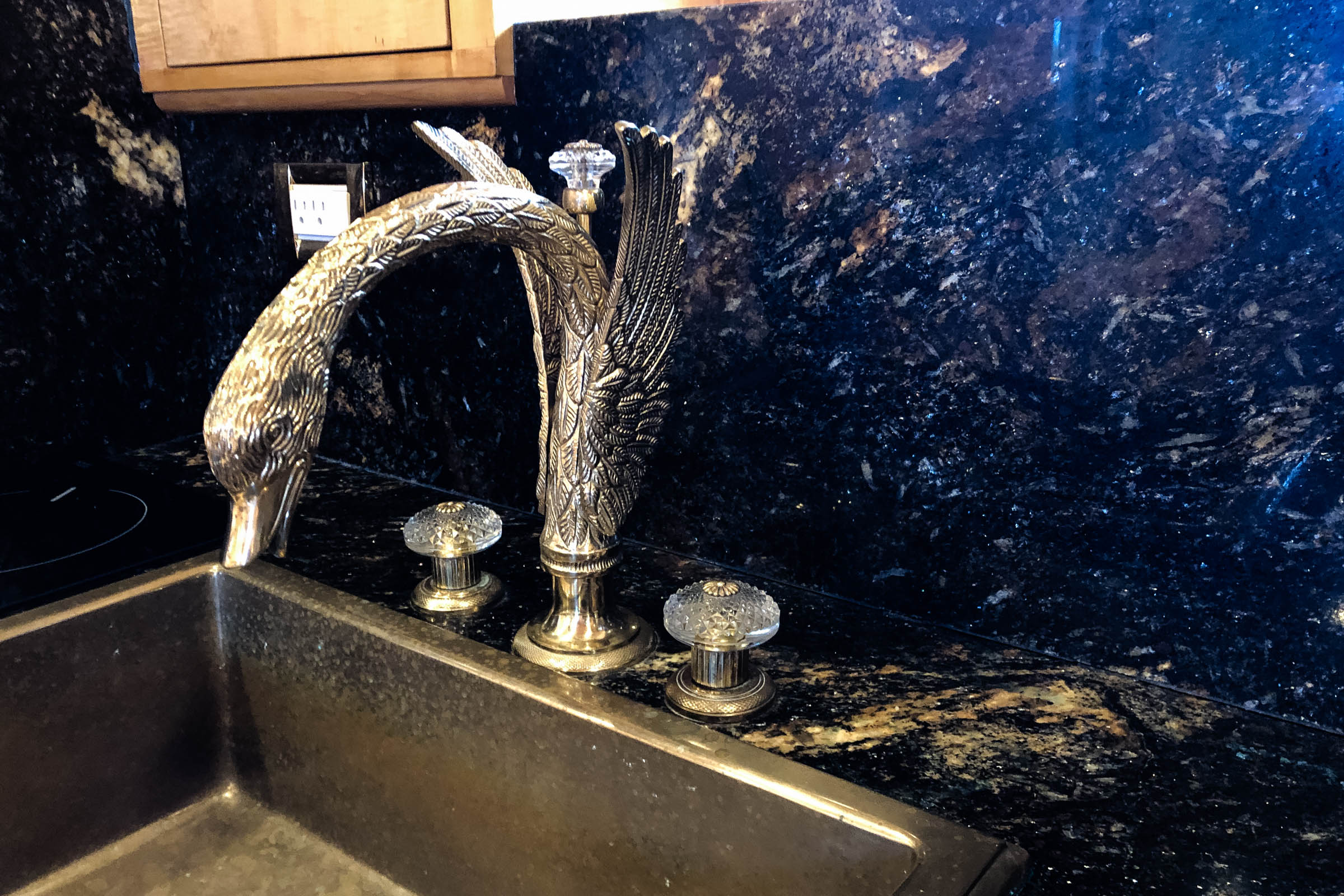 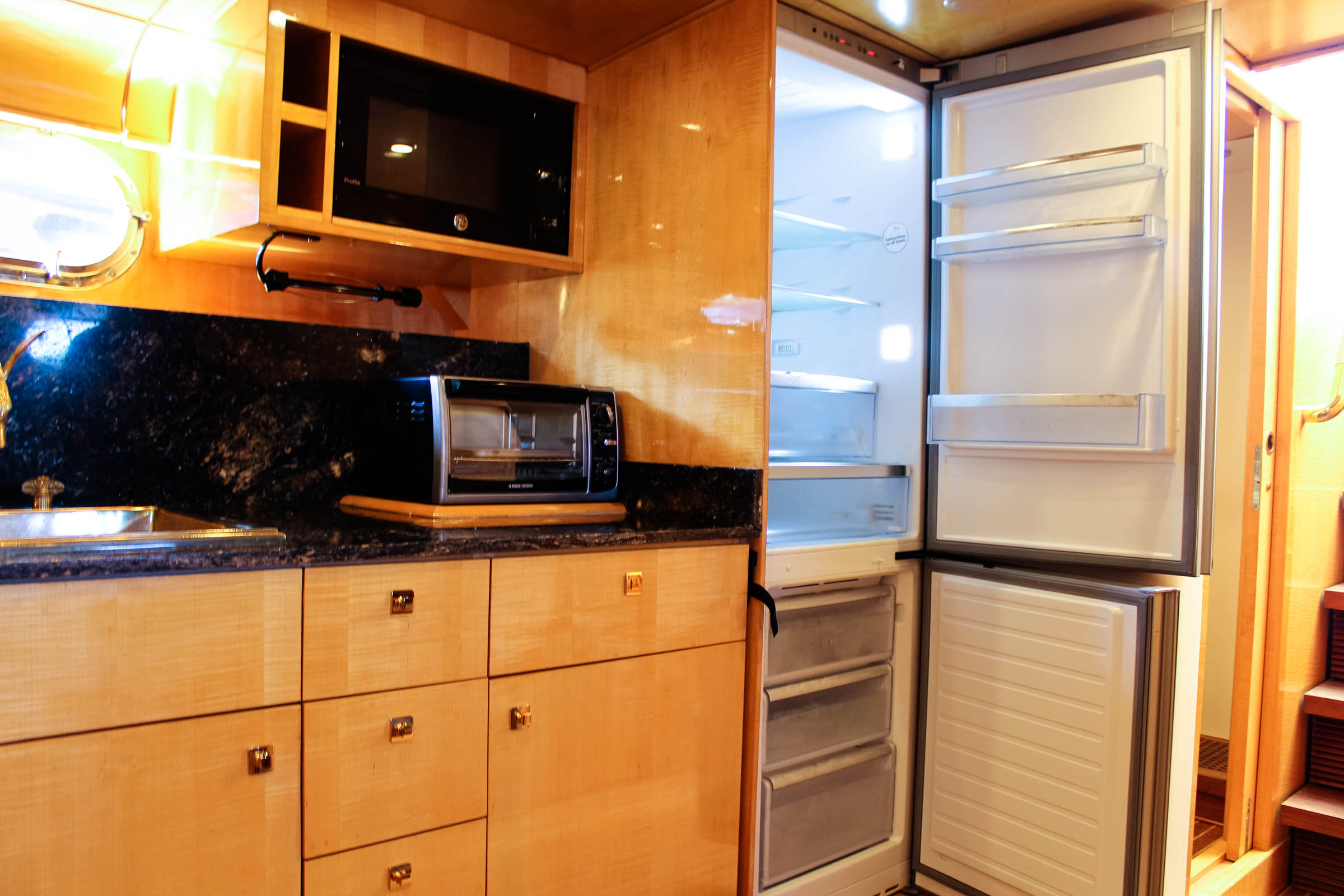 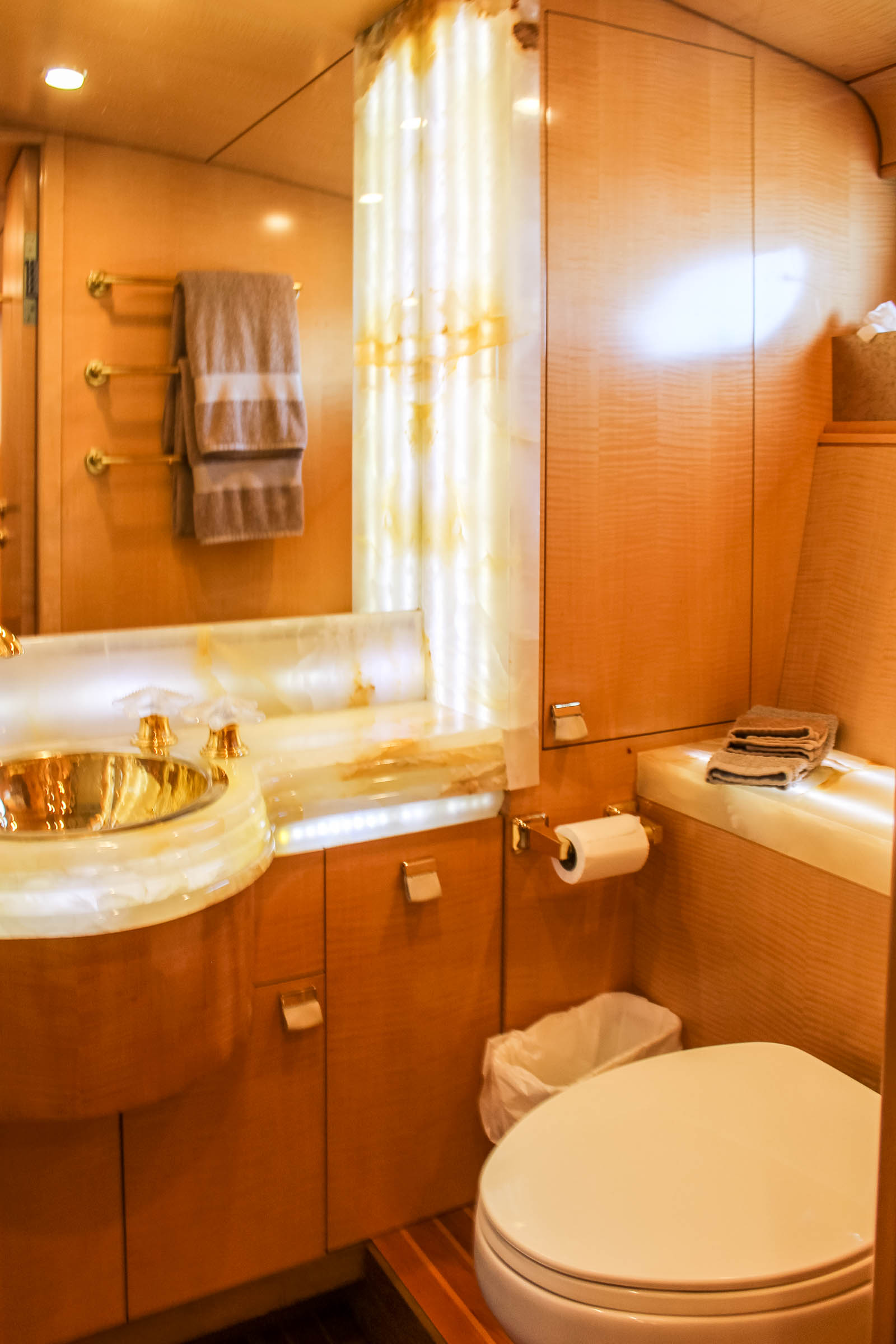 New injectors were put in the twin 16-cylinder 2,000-horsepower MTU diesel motors connected to Arneson surface drives, and with the throttles pinned, the Magnum makes 60 mph feel like child's play. After its seasonal trip from the Chesapeake Bay down to Key Largo two years ago, the boat has since remained in Florida. The modern classic Lil Purely Pleasure Furia Magnum is valued at $1,950,000 dollars but can bring you lots of pure pleasure at its reduced asking price of $995,000.

Look for Herson and his wife Barbara making waves in a new monster. Yes it's named Purely Pleasure. Yes it's yellow and red. But no, it's not a Magnum Marine monstrosity. This time the high-performance powerboat connoisseur went for a Nor-Tech 460 Flyer with five 450s strapped to the back. You won't miss it especially if you find yourself around the waters or docks of the Ocean Reef Club Marina in Key Largo. Rumor has it, the Flyer feels right at home hanging out there just like its Purely Pleasure predecessors. For more on the Nor-Tech 46 Flyer, our partner website RDP covered its launch last October at the Fort Lauderdale International Boat Show: https://www.riverdavesplace.com/forums/articles/2020-fort-lauderdale-international-boat-show-lighter-on-boats-brighter-on-sales.760/ 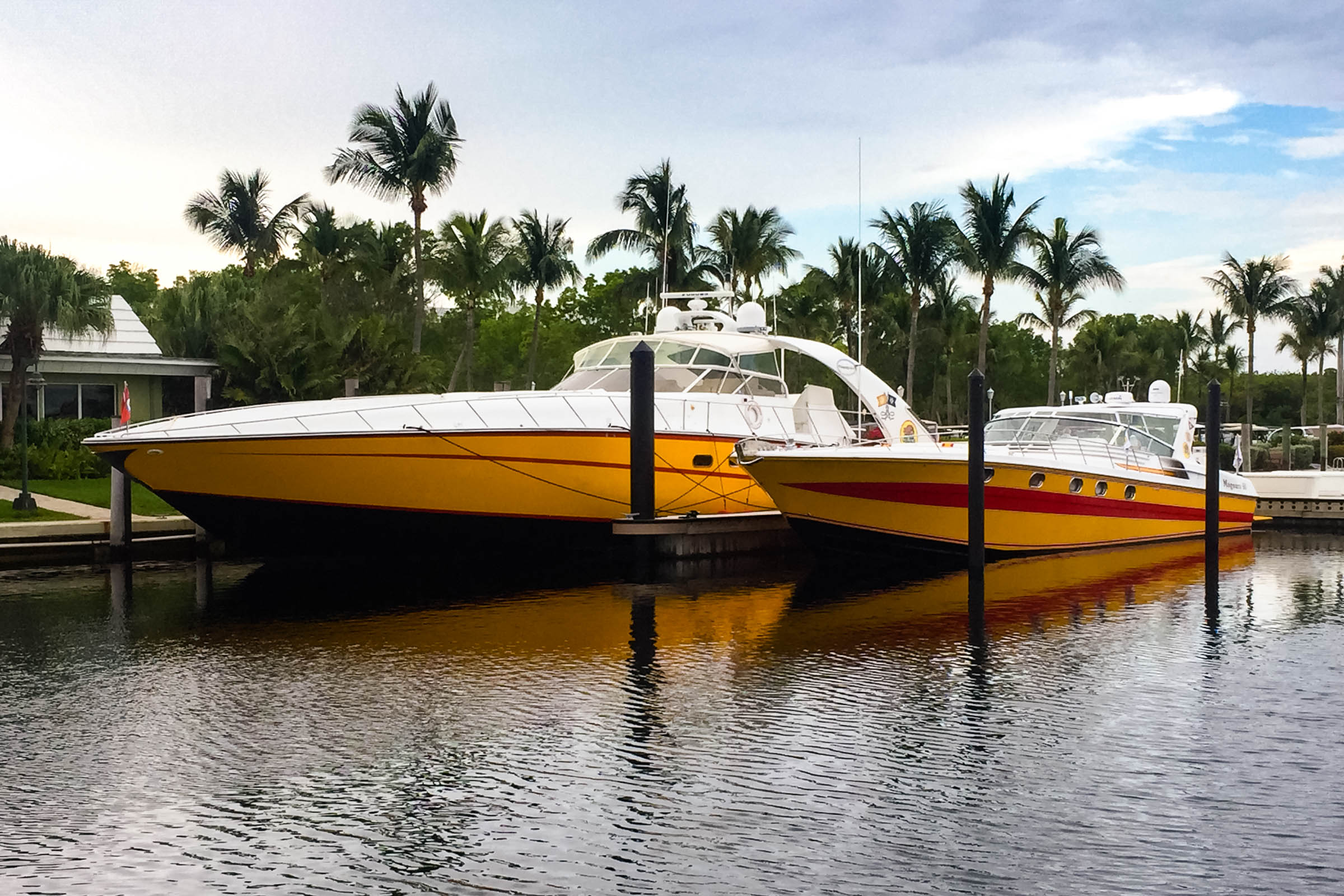 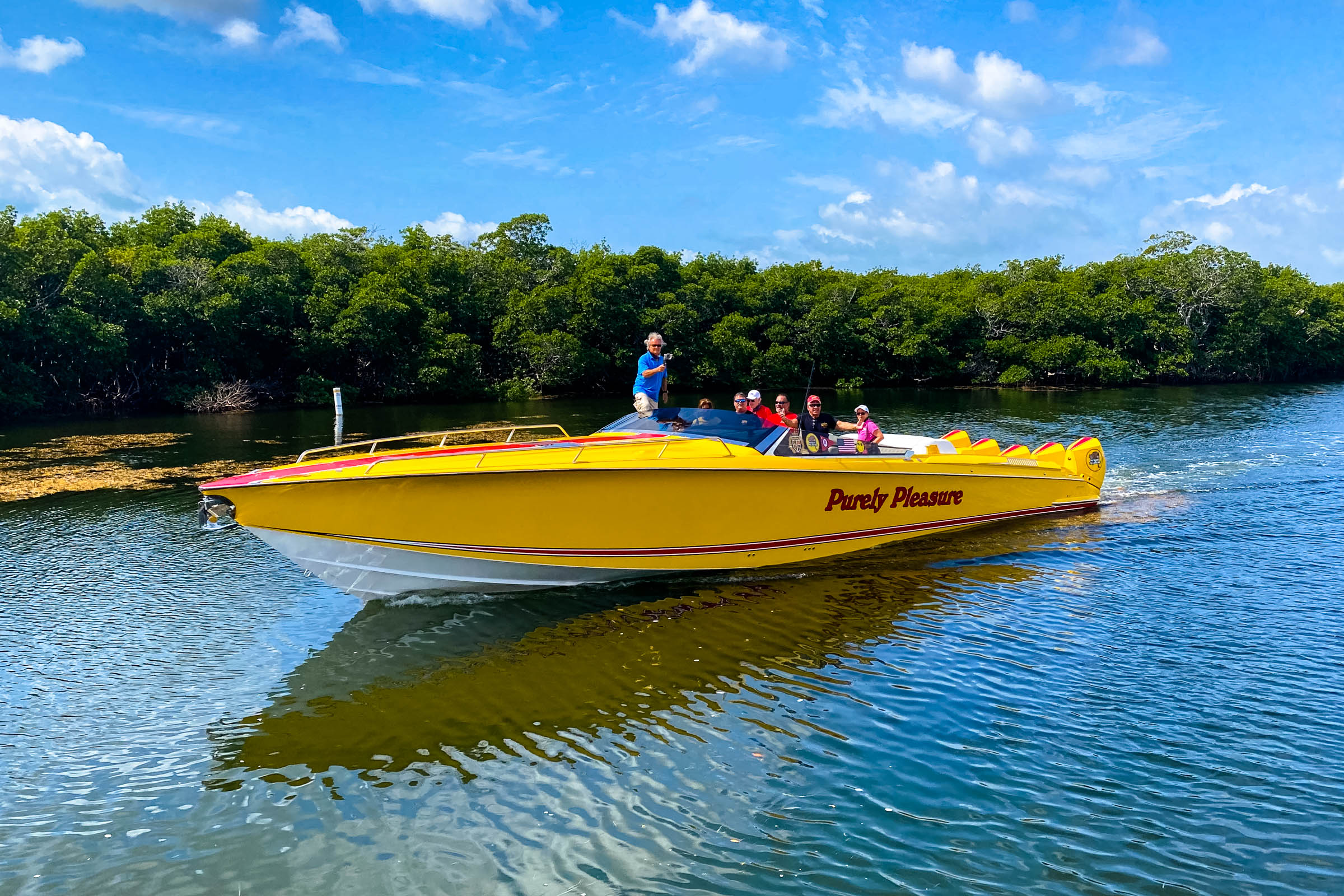 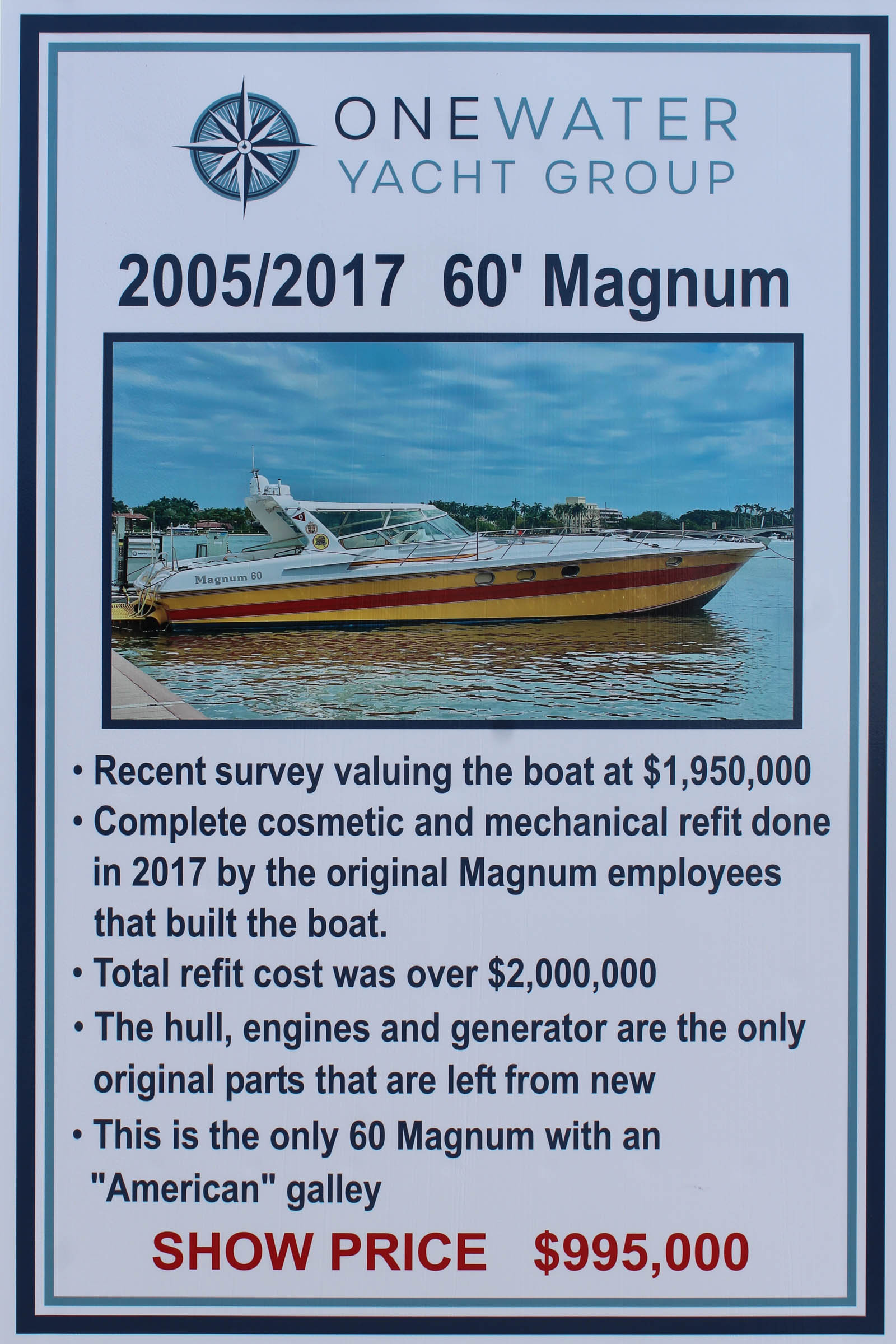 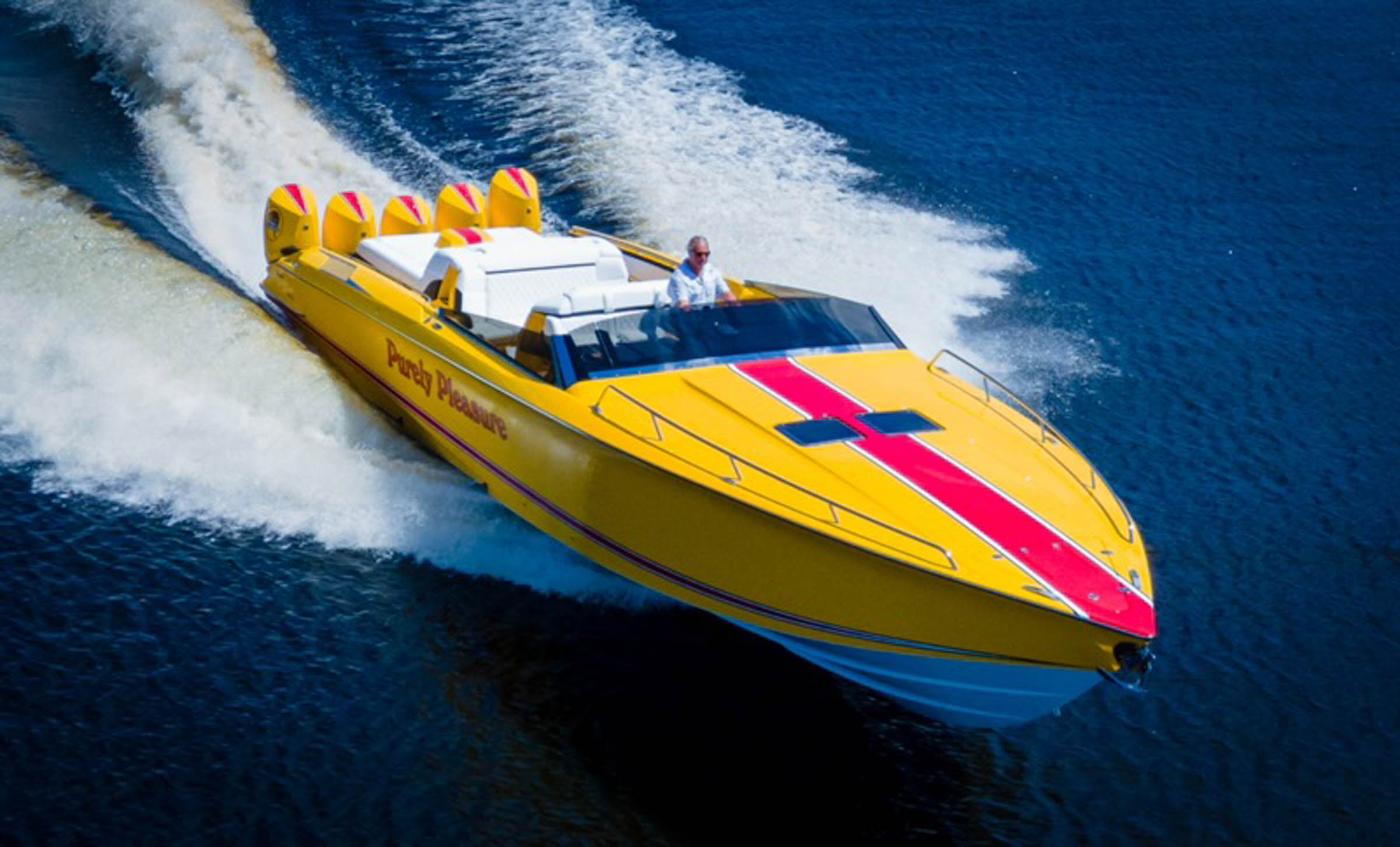 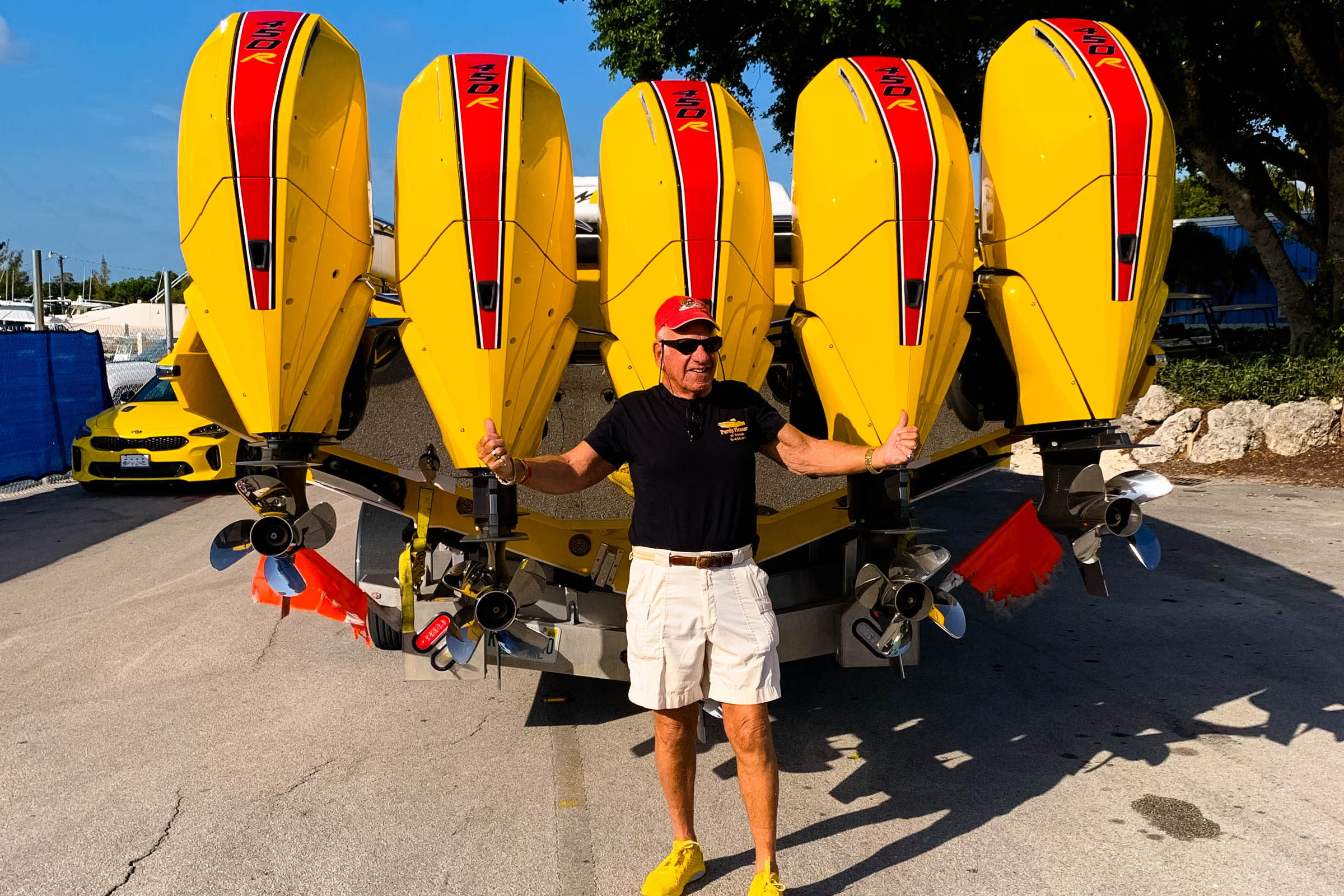 What drew me to discovery number two was the Pininfarina badge jumping out at me like a Prancing Horse Ferrari at the Buddy Davis booth. My inner Italian self was compelled to stop and inquire what marine mission the over-the-top classy and cutting-edge design firm was plotting with the iconic American sportfish line known for its "Carolina flair" bows.

Dr. Ira Trocki, Buddy Davis president was at the entrance and welcomed me in to check out the innovative sportfish-meets-luxury-center console model. My eyes were glued to the gray wunderkind in the enclosed glass case like an eight year old to his tablet in the back seat of the SUV. Luck was truly on my side because as CEO Michael Tallent was pointing out all the features, walking up to the display were none other than Pininfarina’s senior designer Stefano Luppi, and sales and marketing executive Robert Graziano.

The tag team synergy between the two flagships was evident while listening to the three gentlemen talk about the end result – and blending the best of both worlds. The Buddy Davis 46 infuses signature Italian styling thrust forward by American craftsmanship power and propulsion. In keeping with the brand’s sportfish heritage, design attributes have been respected, yet at the same time, a newly conceptualized sea creature of unparallel proportions has emerged. 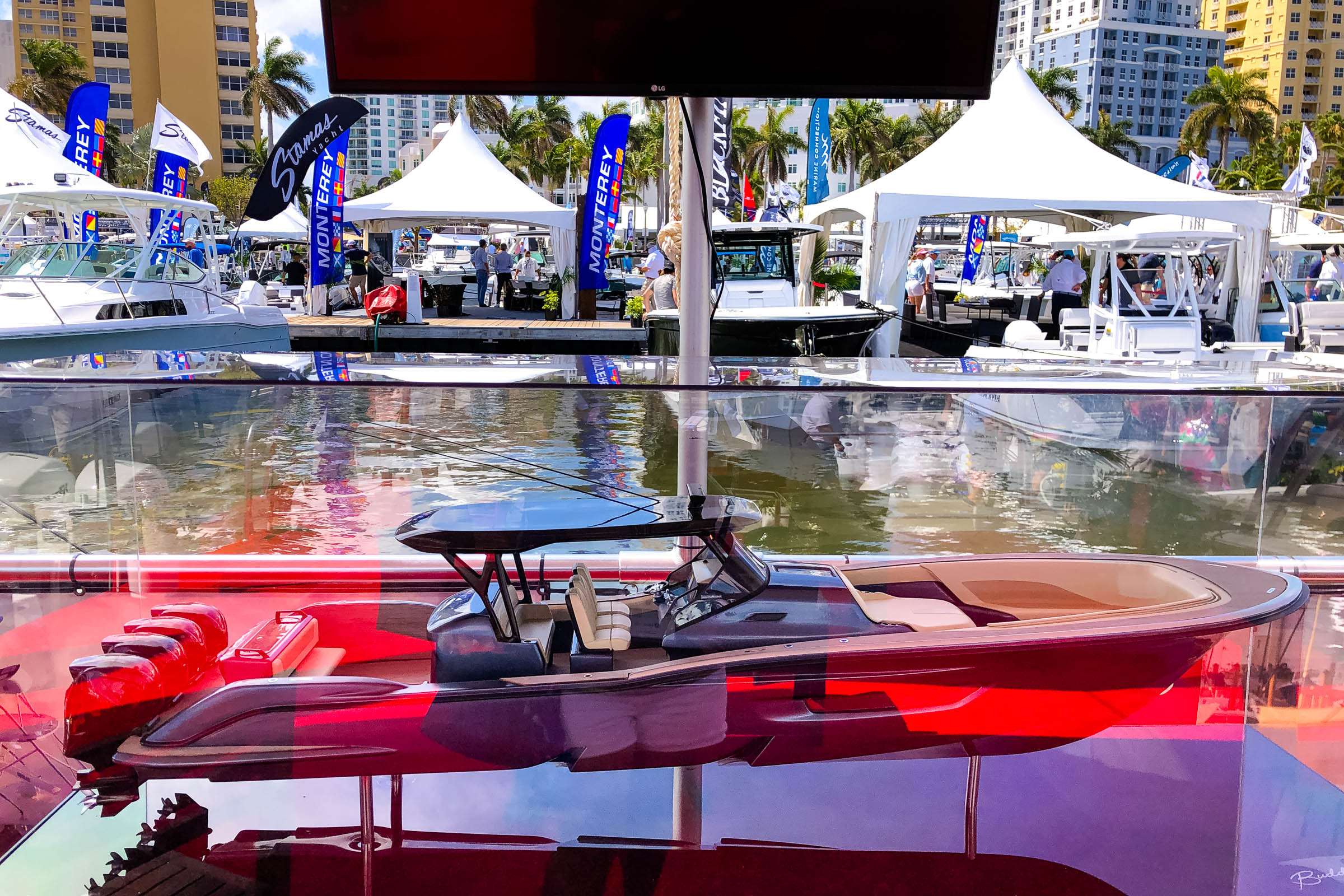 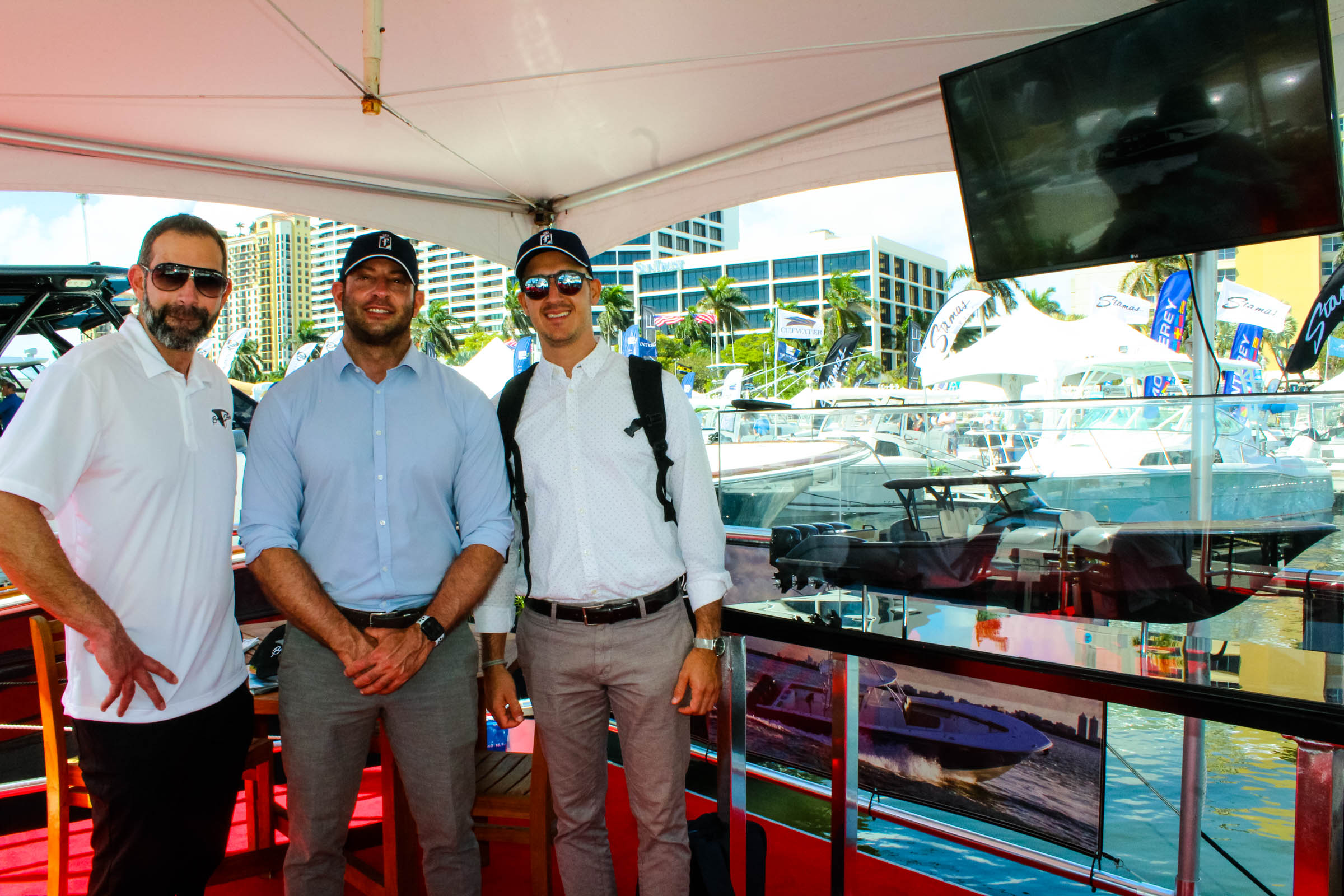 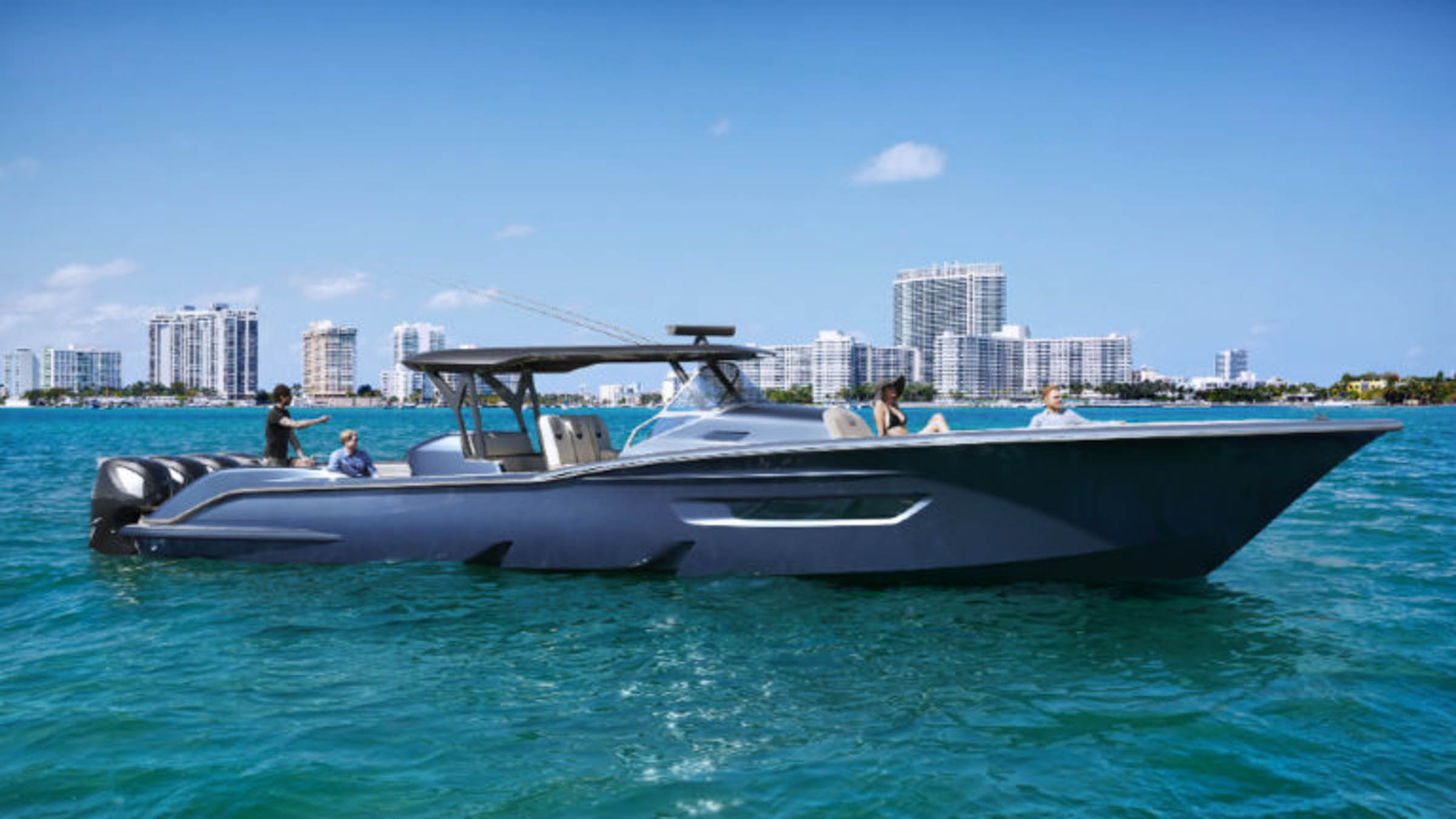 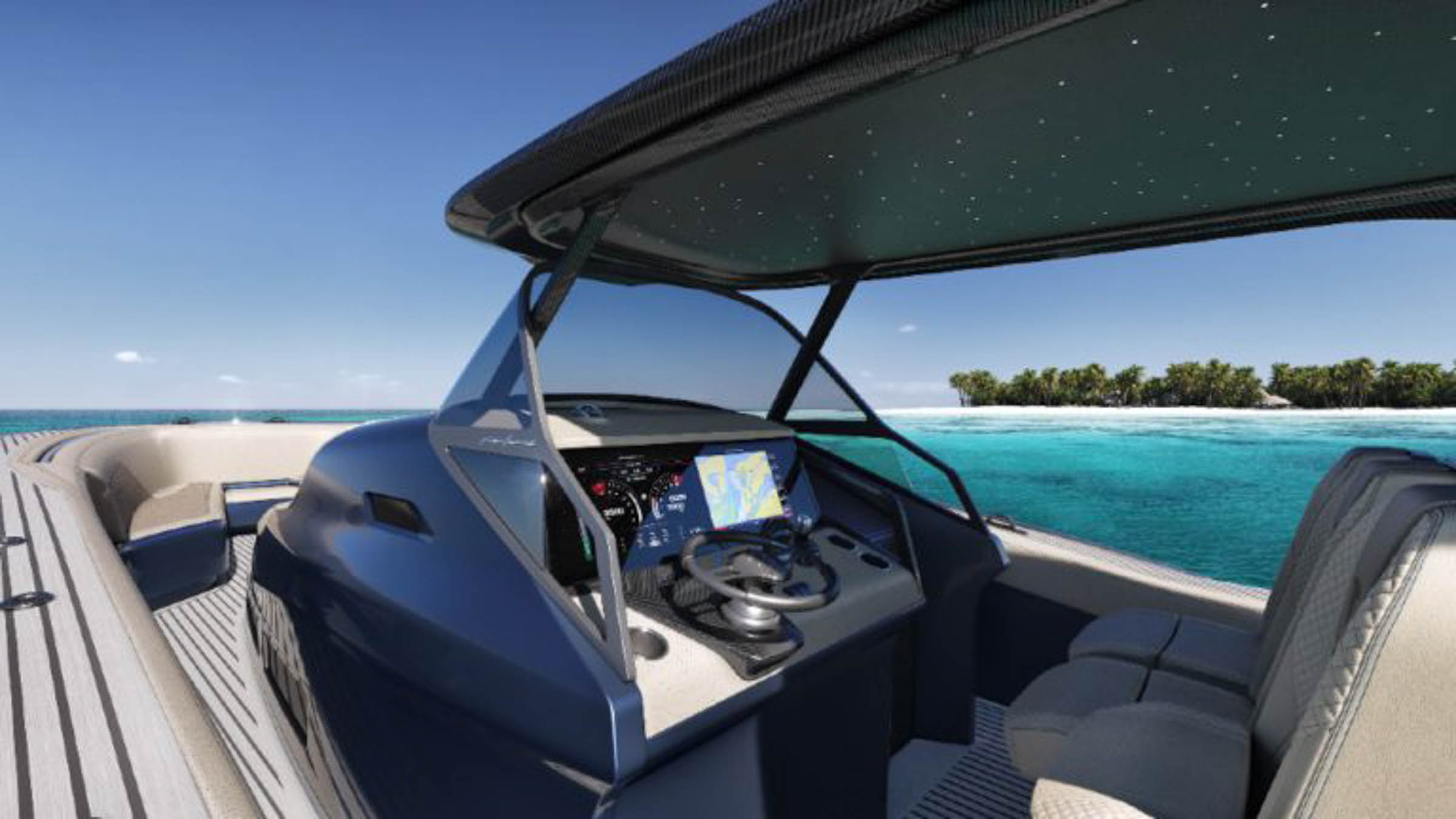 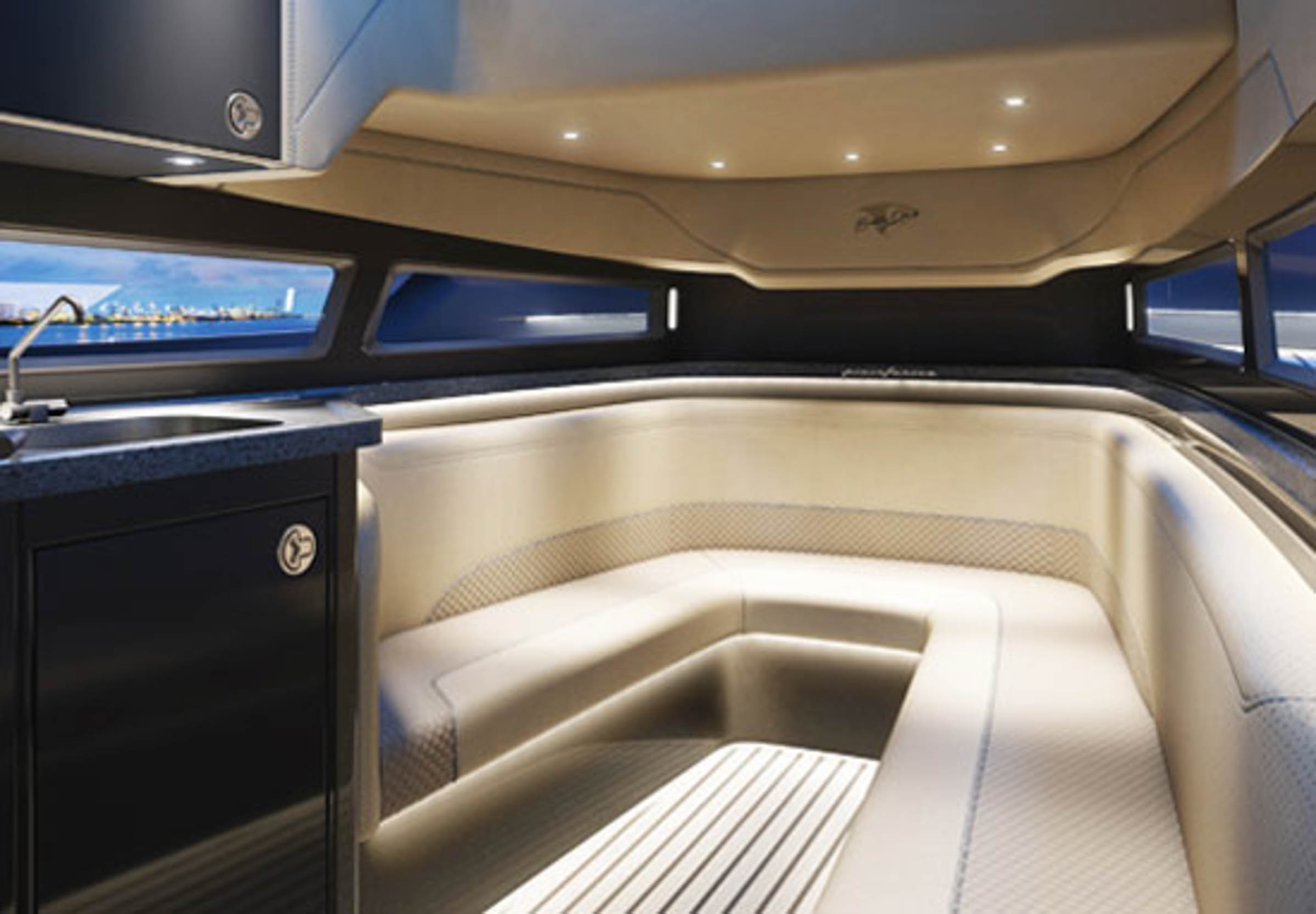 Curvaceous lines flow from the upturned bow through the gunwales and extend around the hull, making the new edition easily identifiable.  What's more, the all-around “edge” on the myriad of Buddy Davis vessels literally gives these nimble nautical ninjas “the edge" over the competition. Thanks to that topside flair, they remain unrivaled and unruffled when effortlessly bouncing off peaks in bumpy territory. Apart from the curves, key elements incorporated into the build include: fold-out side bulwarks and a fold-out sliding television on the stern; a full array of angler amenities to assist with taking down the trophy catch; helm and bow retractable shades; a standard Seakeeper; and a distinctly European-inspired lower cabin that sleeps four.

High-end exotics have been exported from the luxury car industry and for all automotive aficionados who fancy the Starliner Headliner Rolls-Royce – you’ll love those same stars shooting across the Buddy Davis when you look up. Another eyeball-pleaser is the special highlight coating that runs along the hull sides while keeping in harmony with the upper deck. Ringing up within the $1.3 to $1.4 million-dollar mark, the twin-step hull will accommodate 16 guests onboard as its four Mercury Racing 450s outboards propel it to anticipated cruising speeds in the upper 60s before 70-plus hammer down time.

Look for a comprehensive story confirming those digits and all the juicy details on the Buddy Davis 46 later in the year once the boat is complete. For now, we finish with a cool-to-know, historic side note linking Pininfarina to Magnum Marine: In 1983, Pininfarina penned the 63’ Magnum mated with diesel power, surface drives and Rolla propellers. Back in the heyday, it was one of the most fuel efficient seaworthy boats running. Pininfarina returned to the drawing board in 2001 when it designed the deck of Magnum Marine’s first 80 Sport.

One thing is for certain... you’re guaranteed the best of the best when it comes to Magnum Marine, Buddy Davis and Pininfarina-designed jewels! 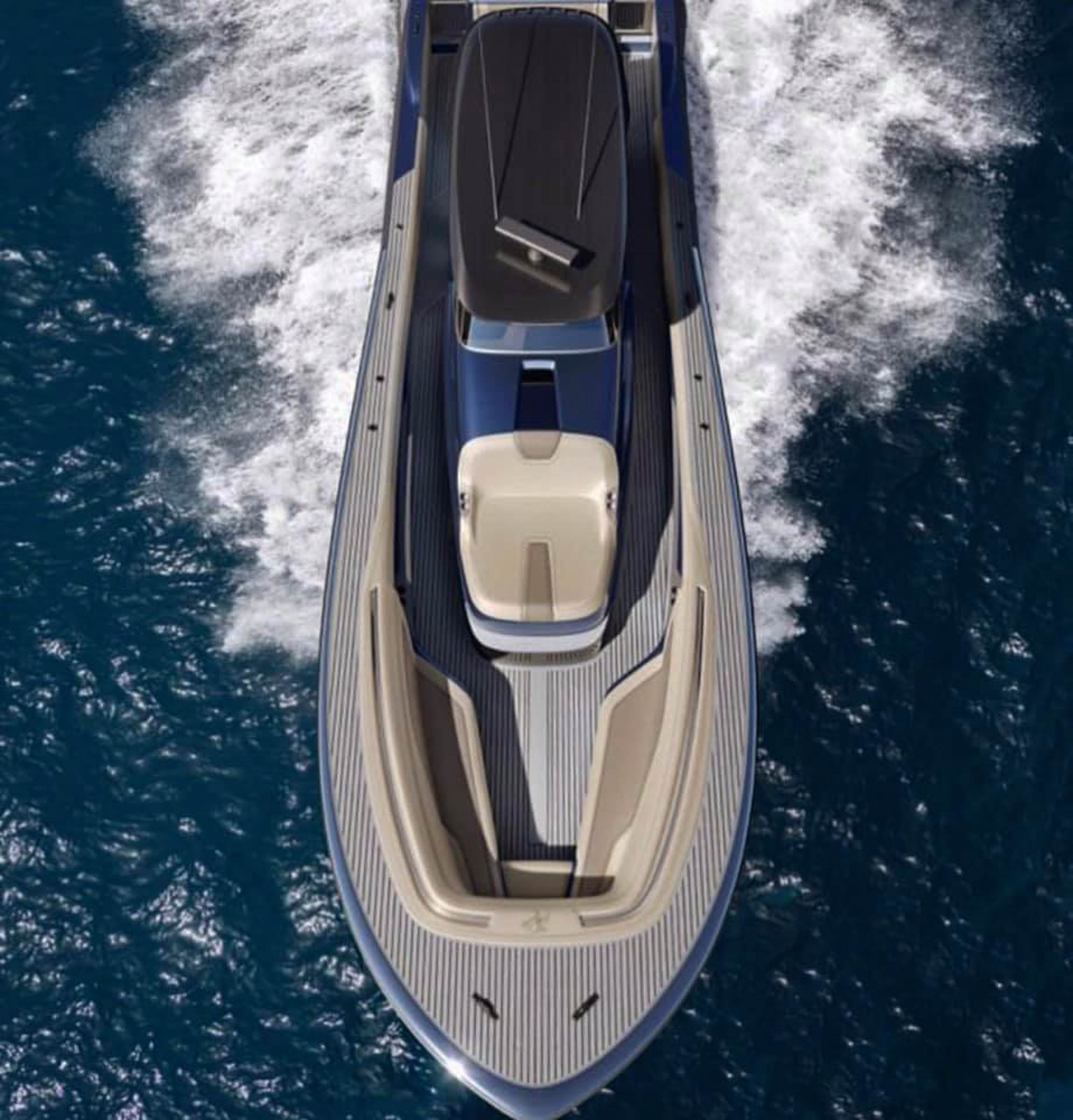 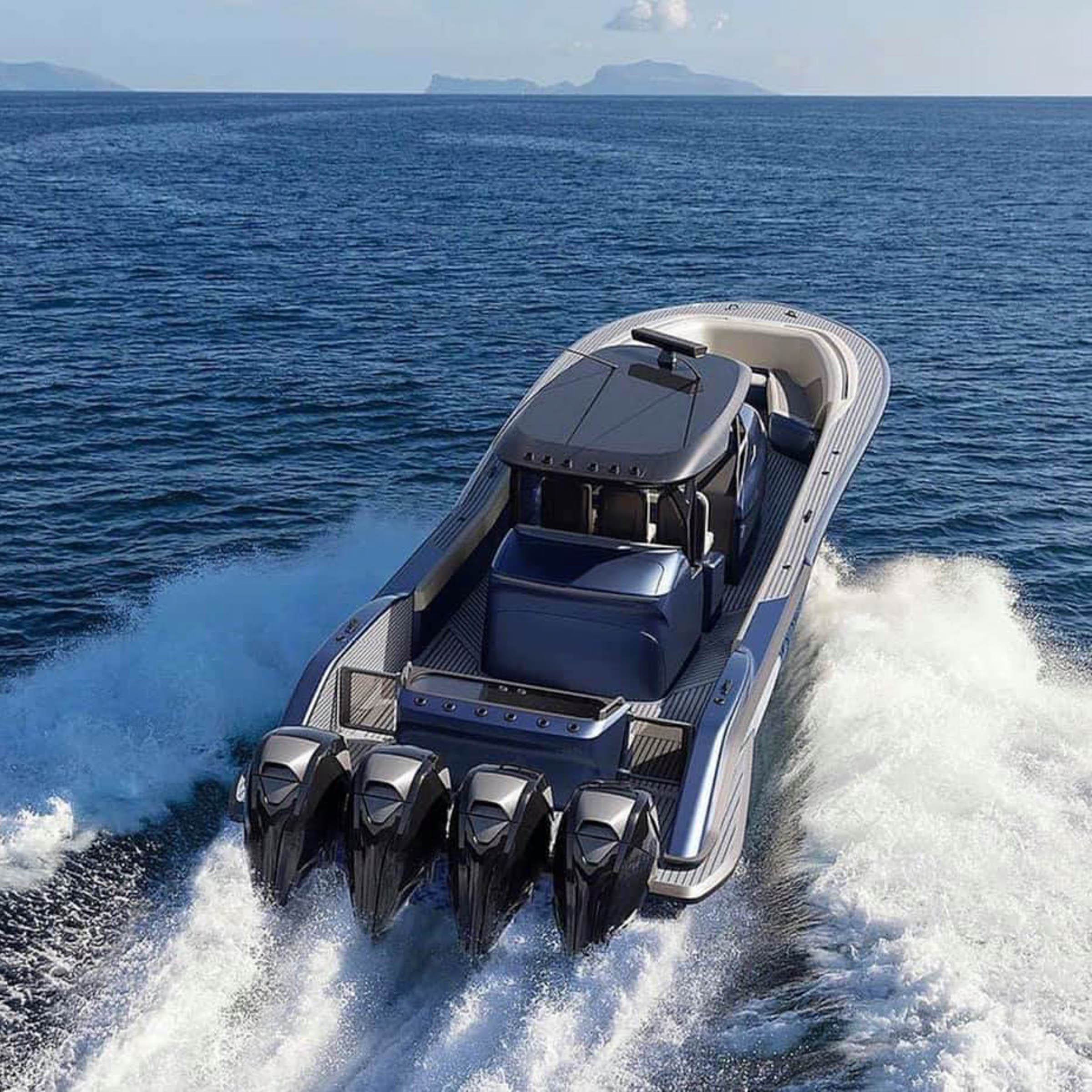 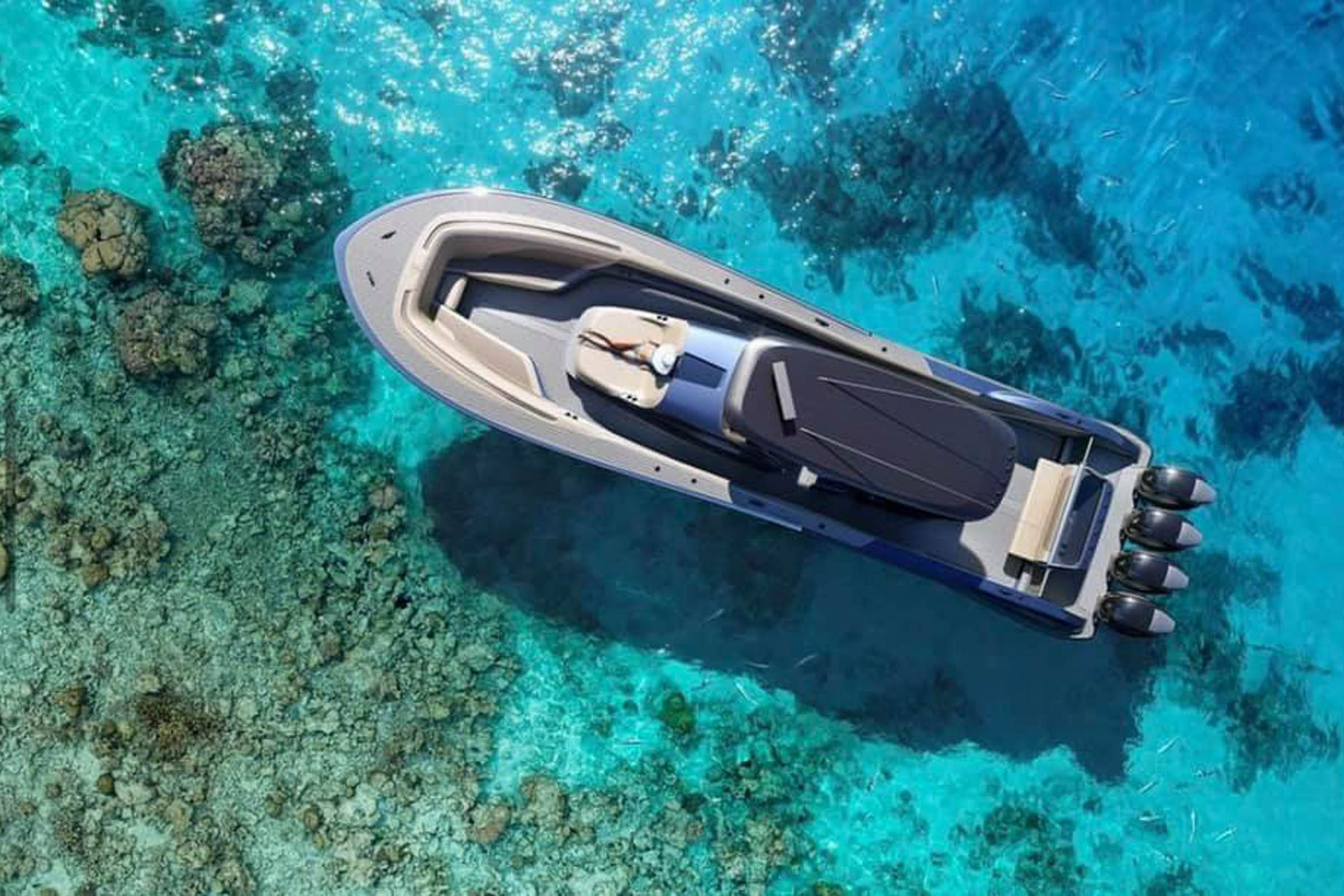