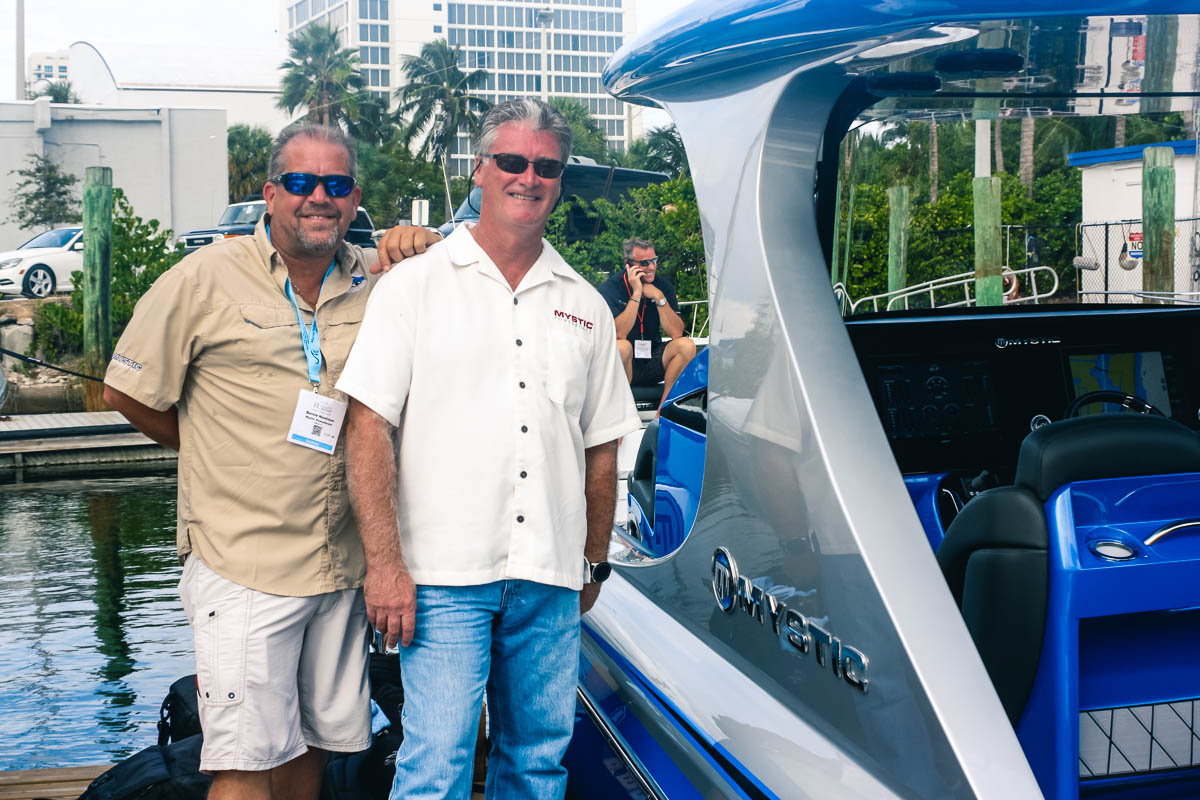 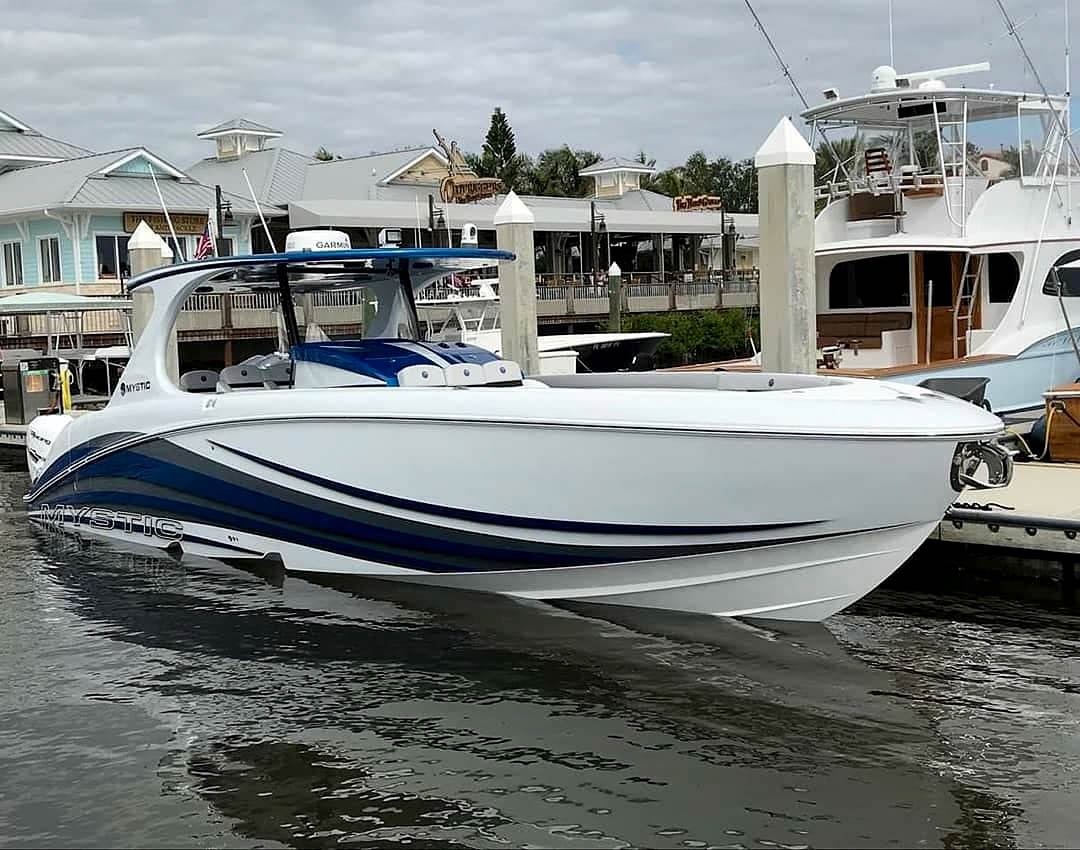 A mono-hull creation in the late 90s for helmsman David Callan led to the re-rigging contract of a Tencara catamaran that put Mystic Powerboats on the map. This was never more evident than the sizzling summer day Callan Marine became the first catamaran raceboat to annihilate the 200-mph record at the 2007 Lake of the Ozarks Shootout clocking in at 209 mph.

The next level of achievement would be the splashing of a conga line of successful 50-footers including Miss Longlite -- which was then purchased by the Miss Geico Racing Team, and Dave Scott's -- Bud Select later re-branded as Bud Light.

Now insert Aqua-Mania, Cintron Energy Drink and JBS to the list in 2009 and add two more mind-blowing LOTO speed records with My Way's 224-mph conquest and Spirit of Qatar's 244-mph take-over in 2014.

Throughout this time a string of additional marine projects kept Cosker and his company busy while a majority of the other leading powerboat manufacturers jumped on the high-performance center console band wagon inundating (in a good way) docks, dealerships and driveways practically overnight.

During the luxury console explosion, Mystic Powerboats remained in the loop keeping an eye on the new lines hitting the market from the competition, as well as monitoring potential imperfections exhibited in these debuts.

This fresh generation of "center consolers" seemed to be plagued by two issues when running their boats... wind and water. Literally! That meant getting hosed down by the spray and splash and carried away by the winds needed to be addressed in Mystic's initial design and construction process. 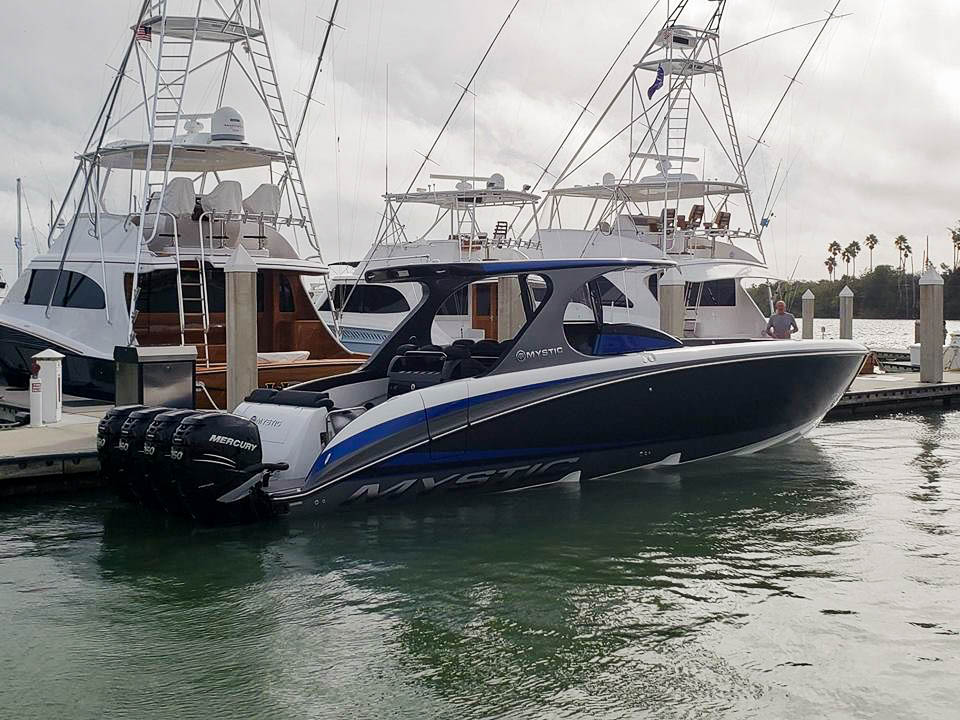 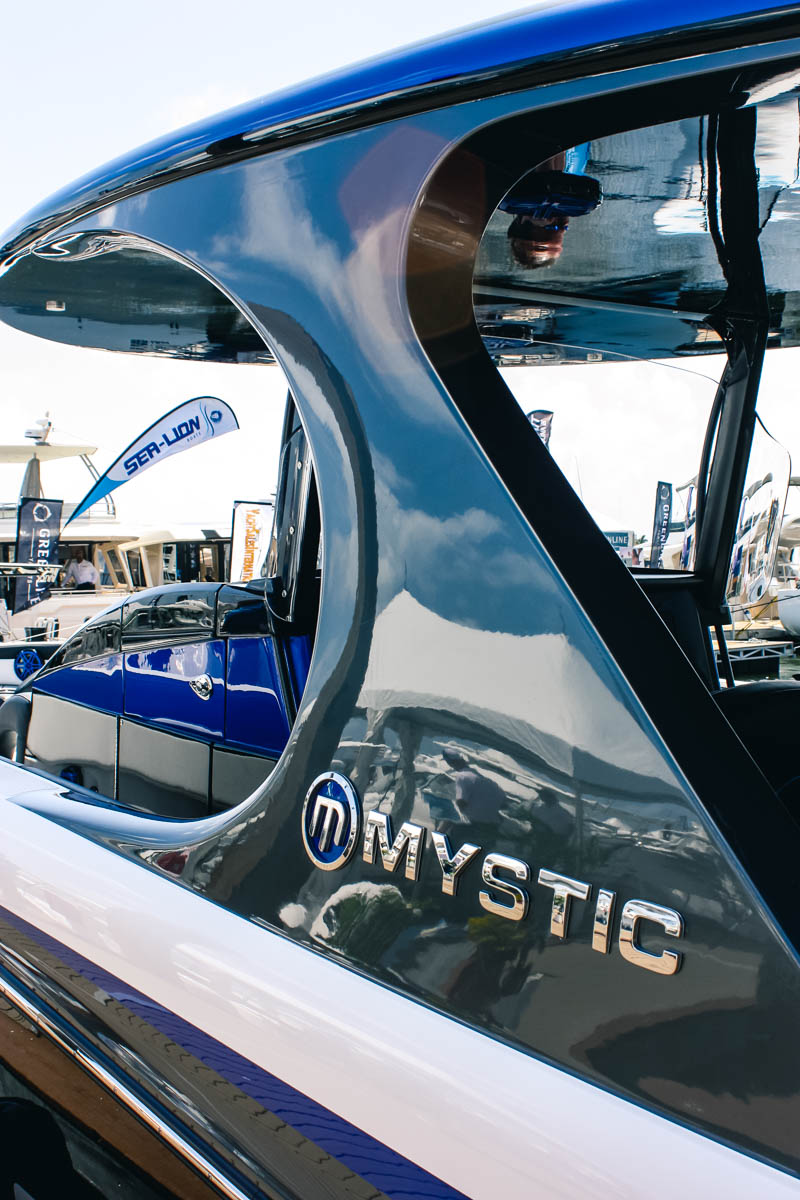 By 2015 the DeLand, Florida-based outfit had done its research, finished its homework and was ready to introduce the M4200 center console. Its strategy to perfect the noted flaws from the other manufacturers' introductory models was on-point and its premier launch was a grand slam. Four years later the Mystics continue to drop jaws and turn heads.

The offshore community was instantly impressed with the paint and performance numbers of the M4200 as they flew up and down the coast of Miami's South Beach or around the rivers of Michigan. There is no wood core in the boat and the deck and hull are fully infused epoxy. The 42-footer invites triples or quads to the transom and produces impressive digits into the low 80s if outfitted with quad Mercury Marine Verado 350s. 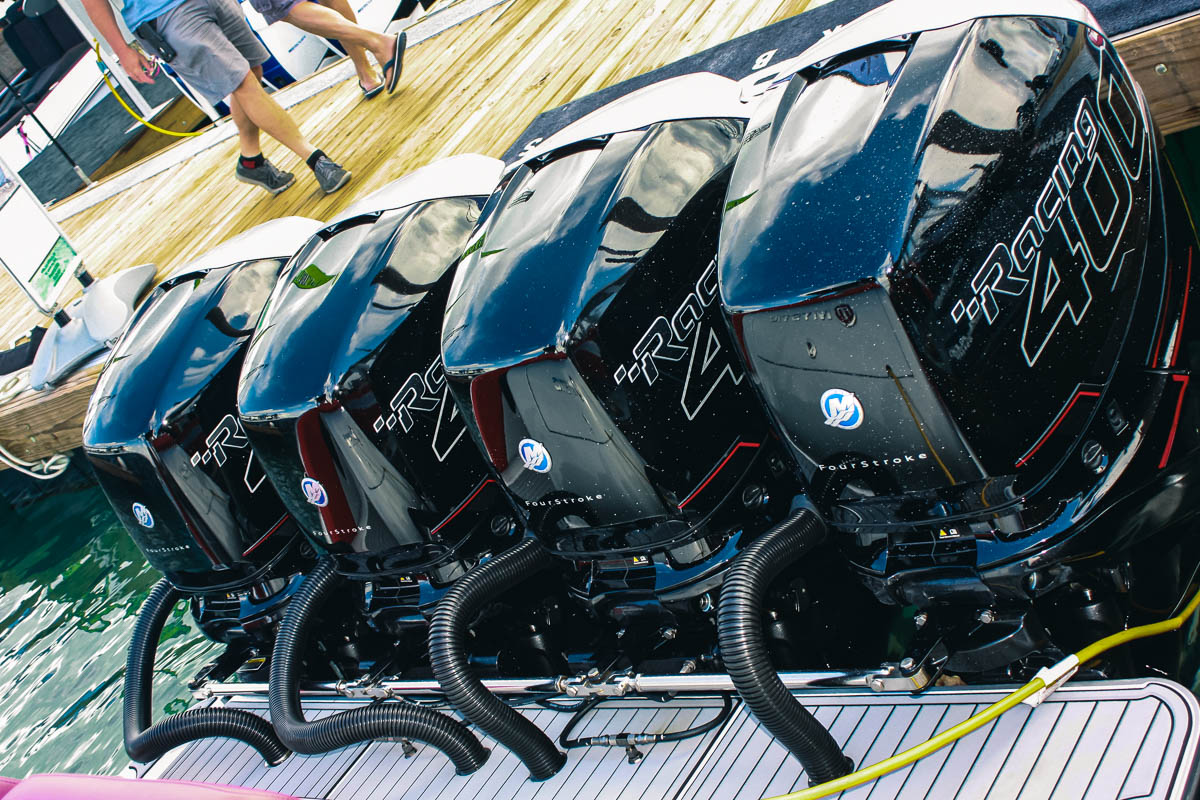 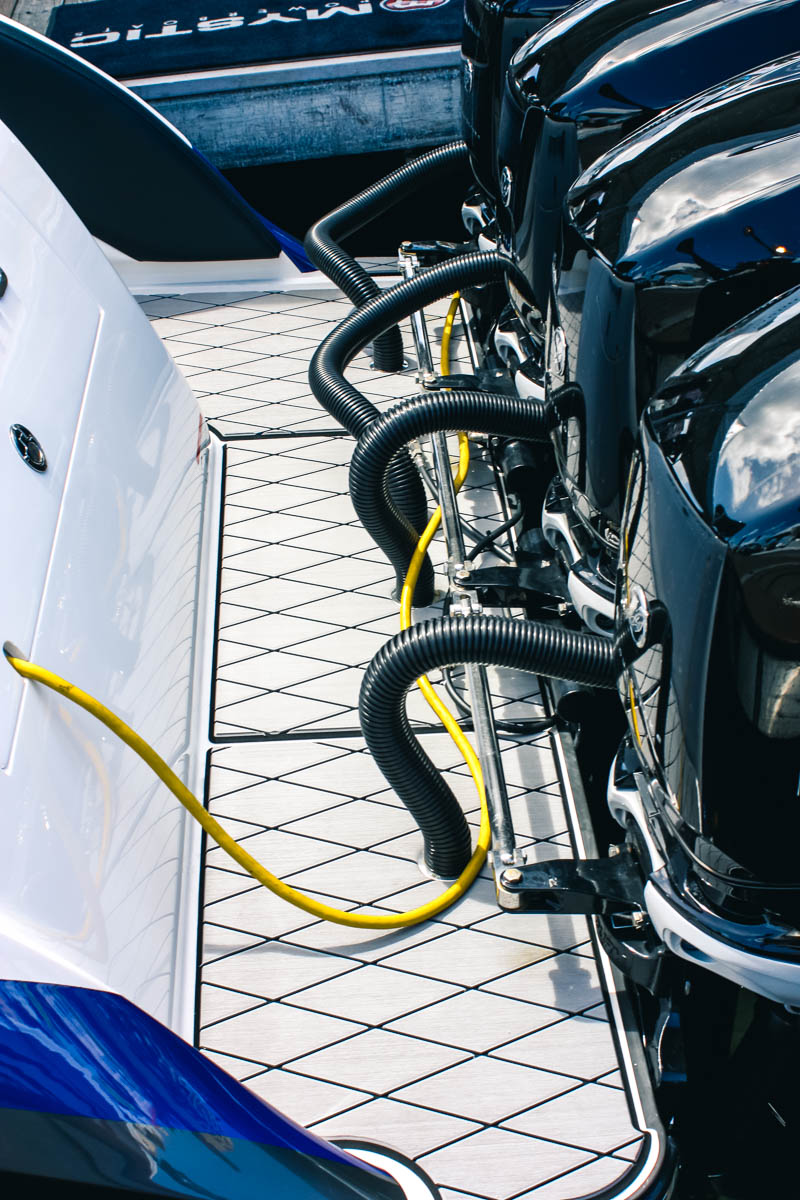 Dressed in refined rather than tacky over-the-top color schemes, clients elect traditional solid and metallic combinations with Land Rover Moraine Blue being a favorite, while others opt for black and white. Whether it be a simple vanilla and chocolate Passover cookie or a grandiose black and white Bentley... the pairing of these two colors is pure class. The black and white plush interior contouring on the 2019 model I photographed during the Palm Beach International Boat Show was not only welcoming but projected a zen-like soothing eminence. Maybe this is due to the 45 to70 pound density foam used in all seat construction. 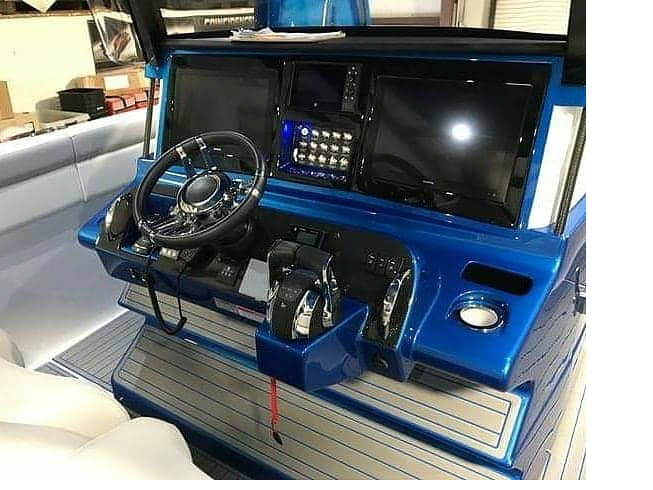 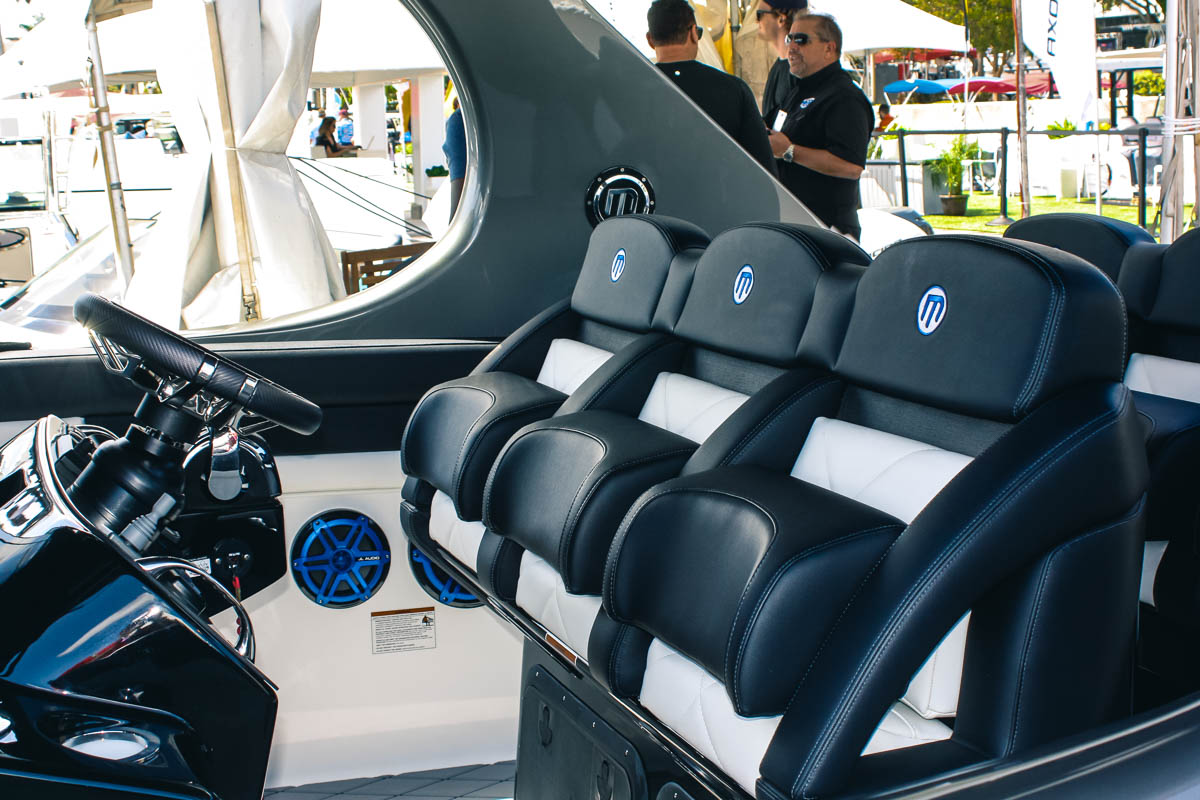 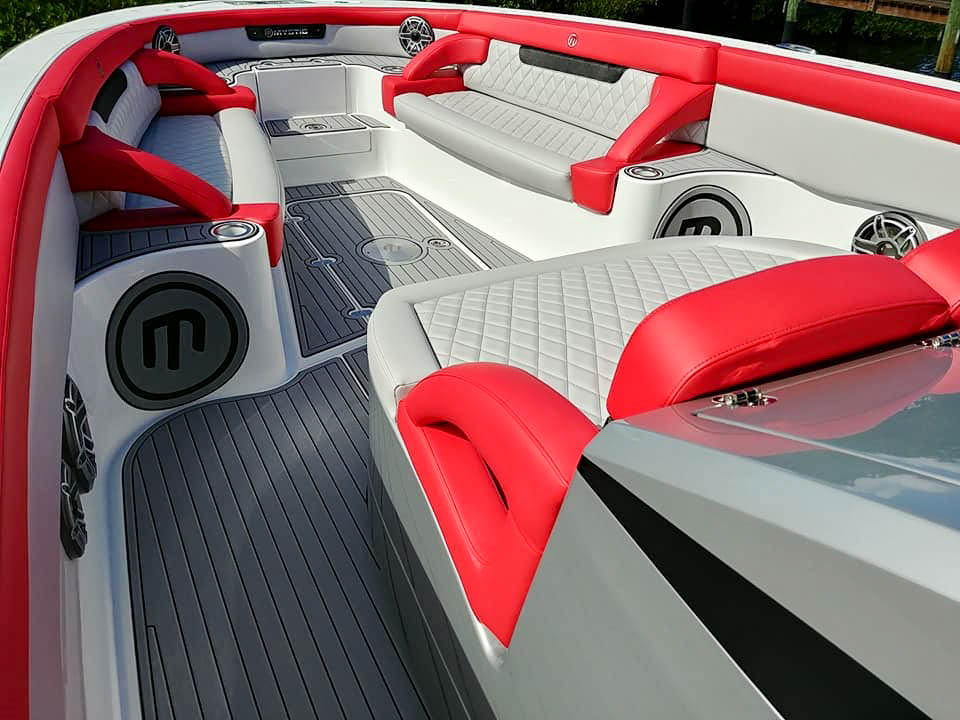 Solving the wind dilemma are port and starboard wind-blocking doors that deploy to protect the two front row helm occupants and the operator from the whooshing winds, in addition to offering increased protection to all those in the rear. When not in use they remain folded back and are supported by industrial strength magnets. 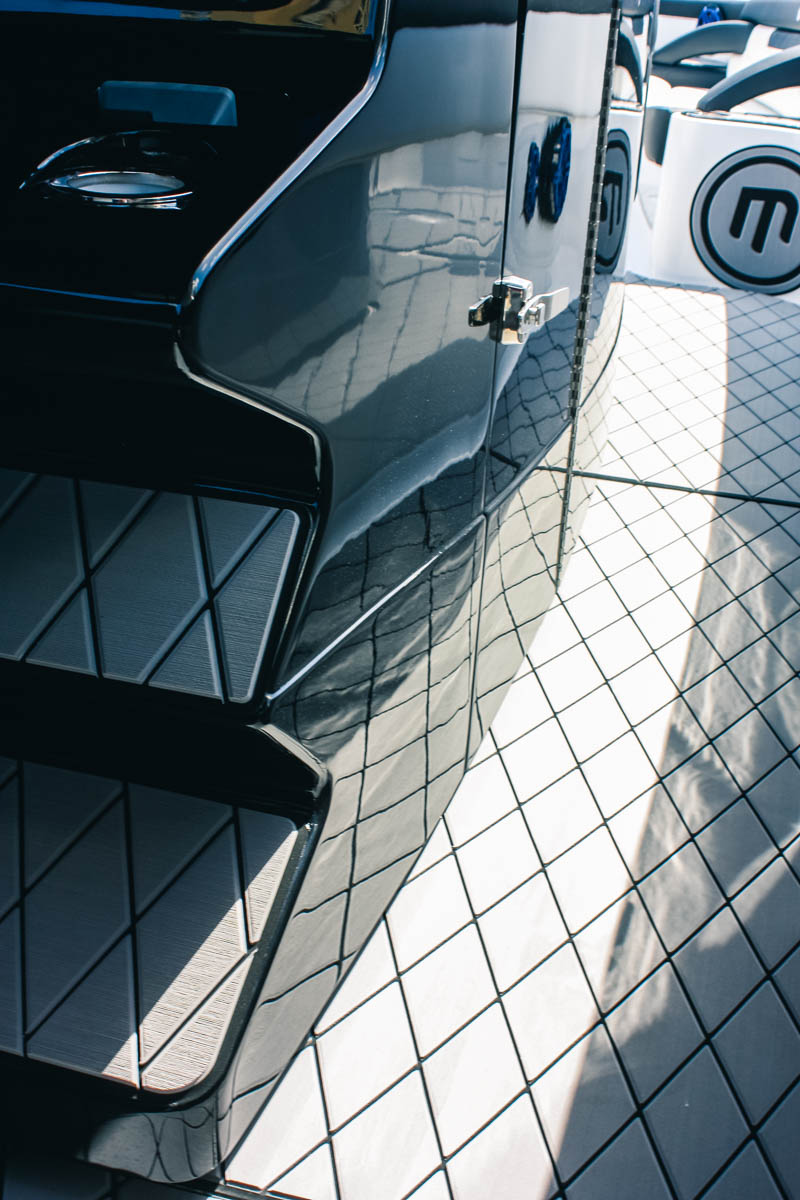 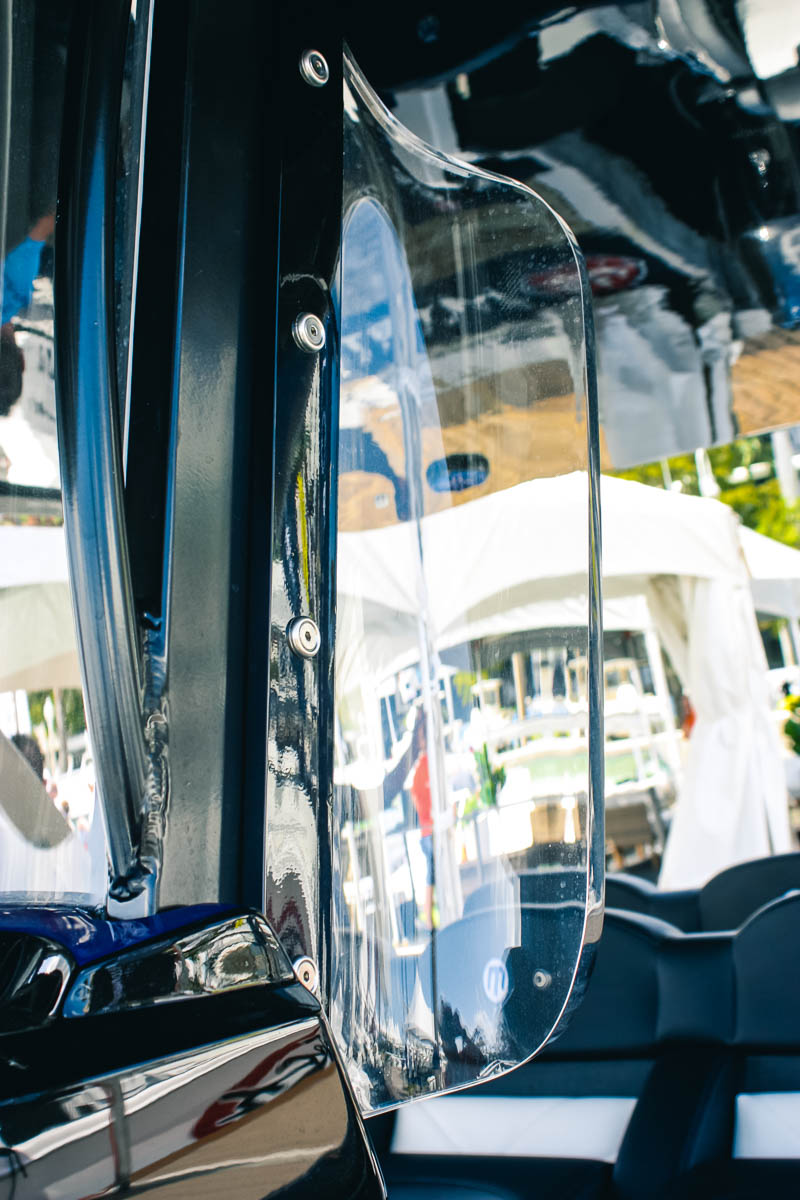 The quandary regarding keeping friends and family safe and dry was worked out by the 60-inch wide helm and heavy and deep 38-inch freeboard around the gunwales. This offers such sound protection that grab rails are not necessary. Furthermore, two additional benefits are that children enjoy a deeper sense of security and it awards a cleaner look and finish to the boat minus the rails. 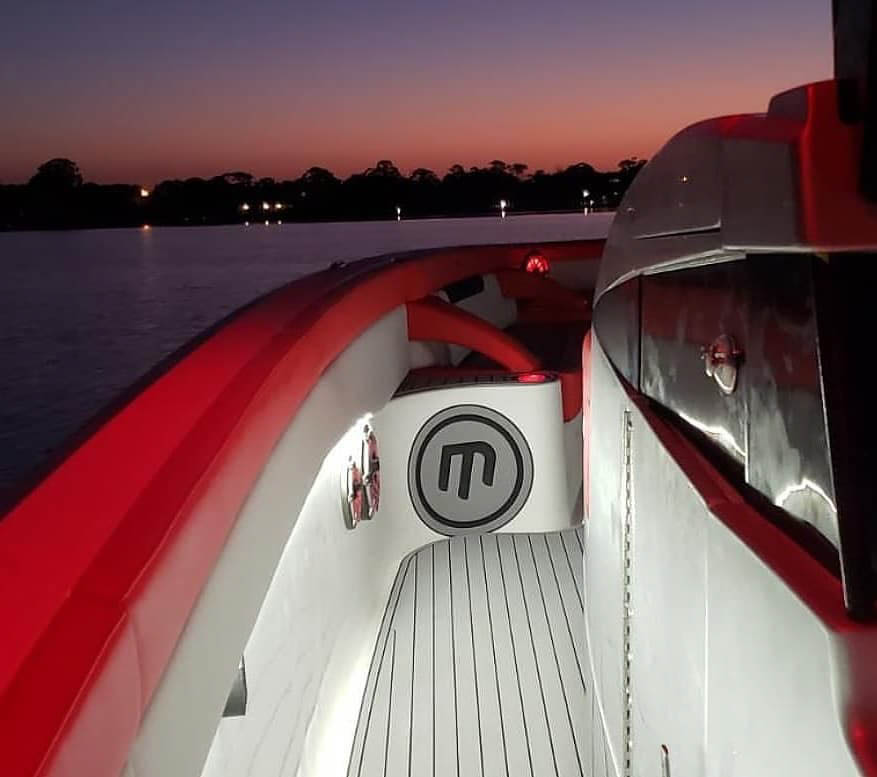 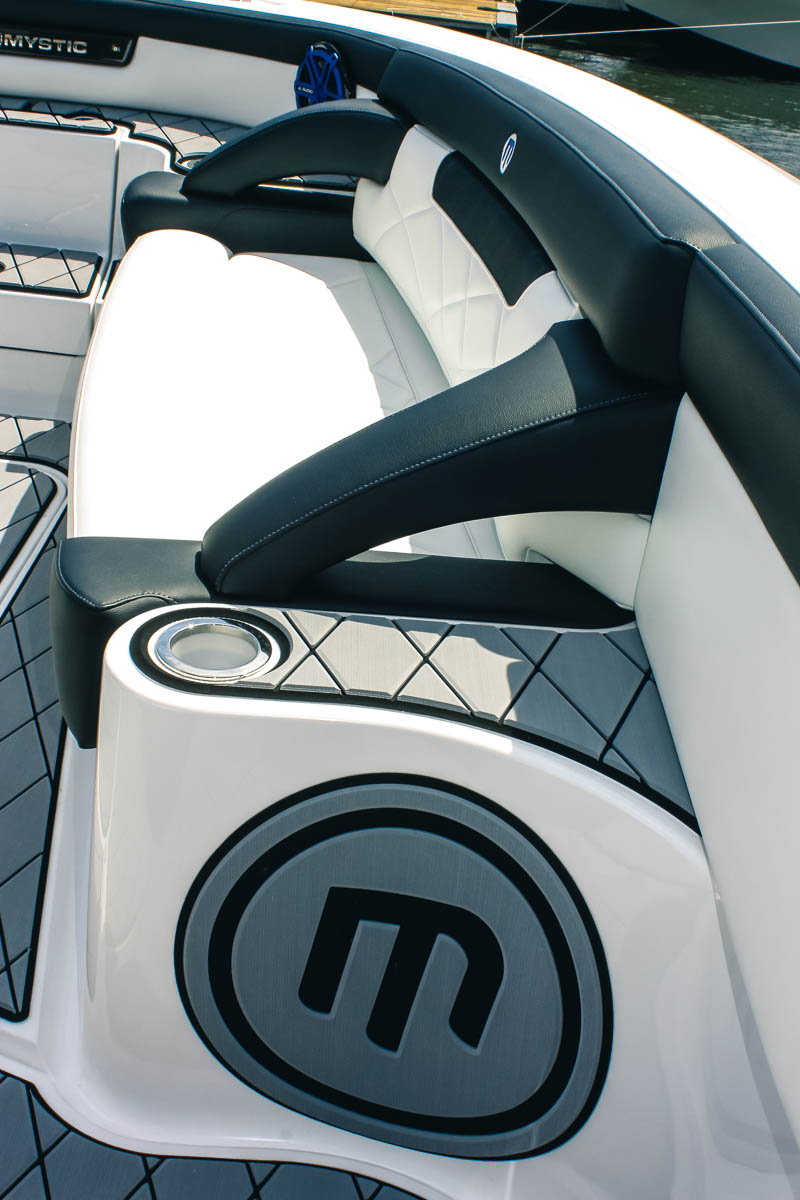 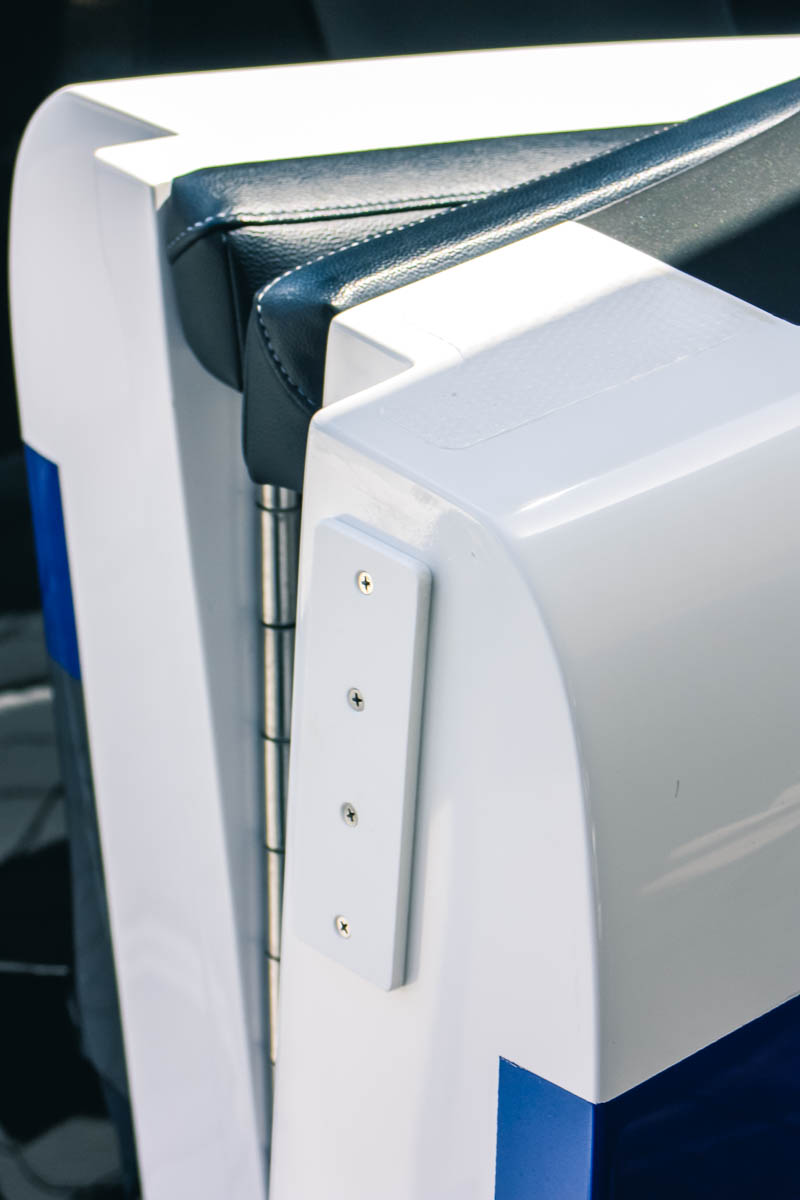 Other aft attributes include an optional second row of bolsters and a sleek slide out cooler. A rear facing bench is another possible configuration for those not wanting to take up the space with the second set of bolsters. Up above, carbon fiber t-tops have been added to aid in additional weight savings. 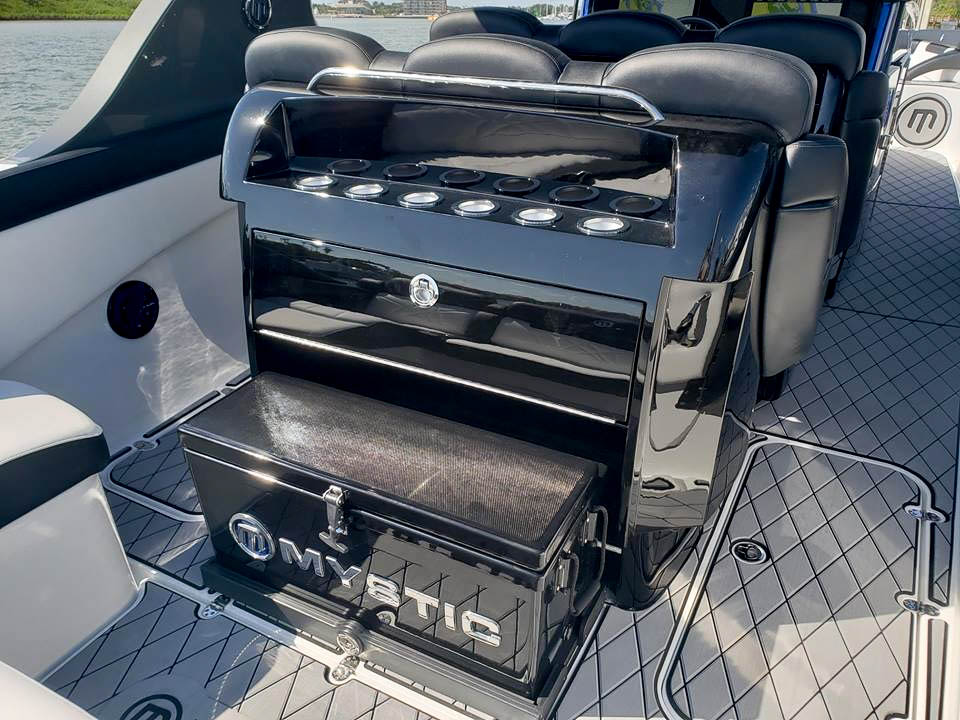 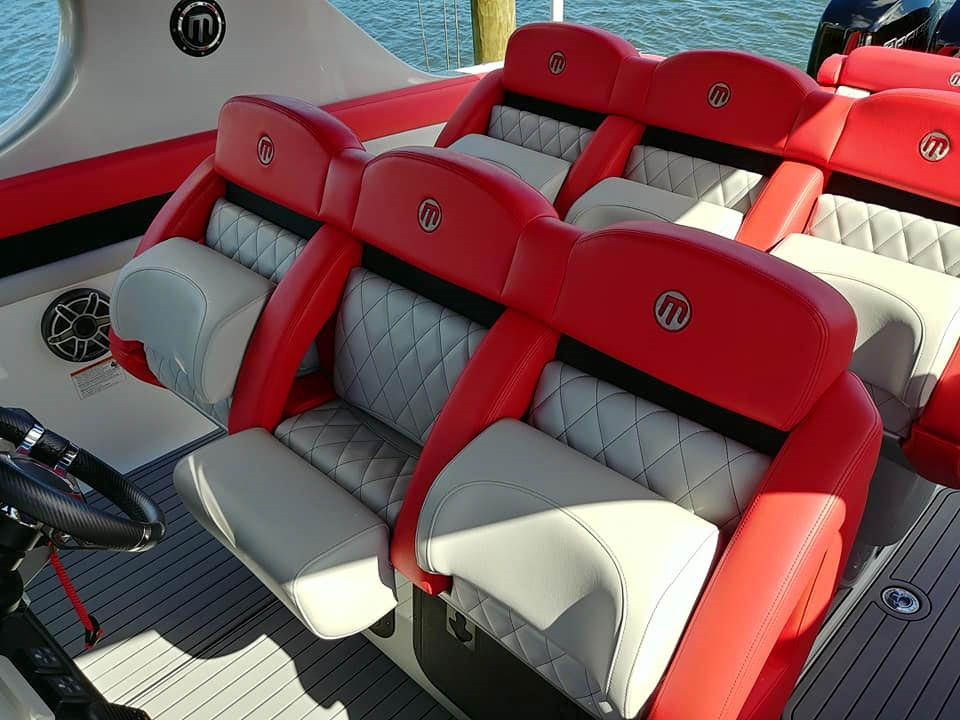 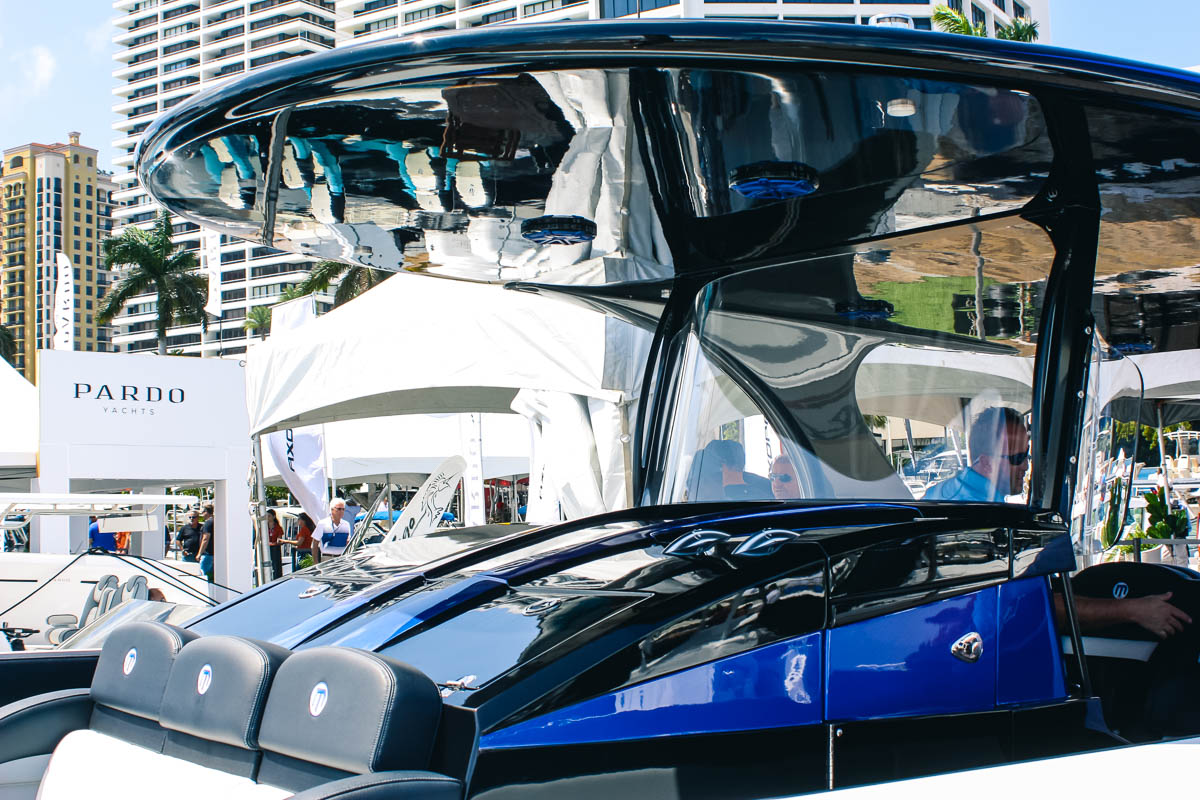 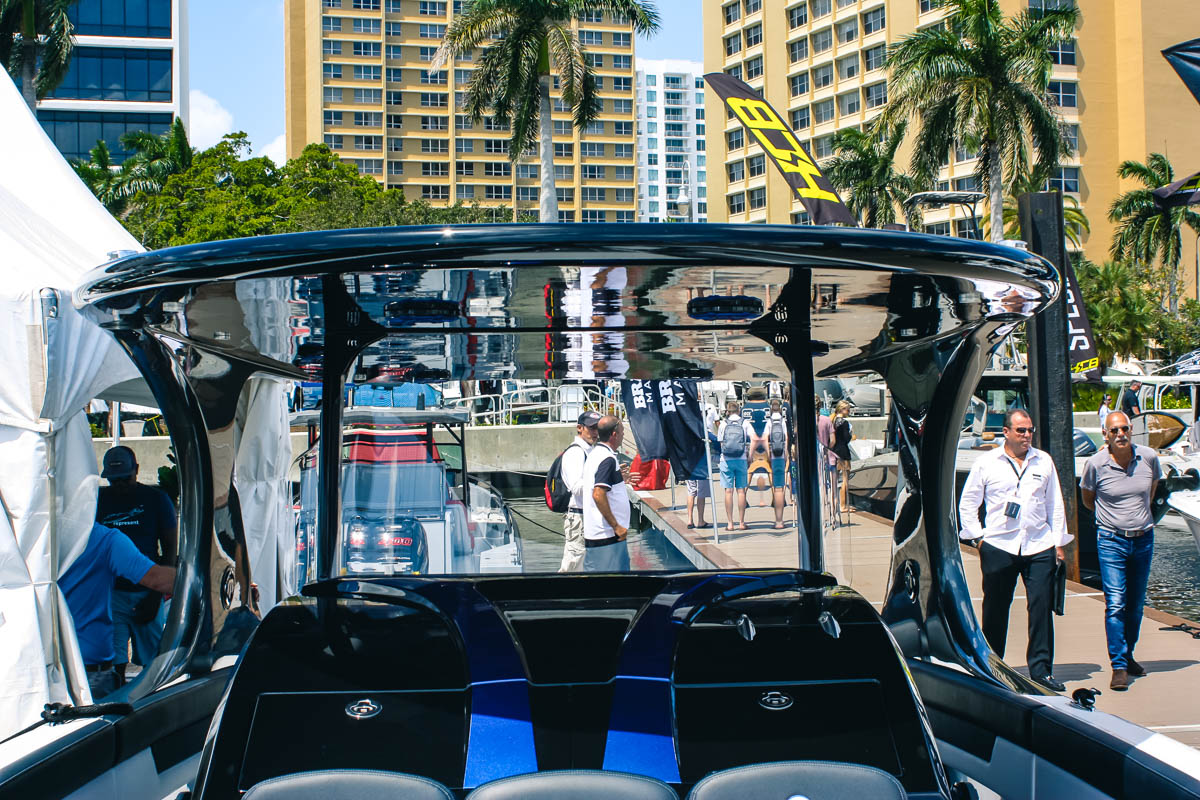 The dashboard can accommodate 17, 22 or 24 inch Garmin screens and the buyer chooses one of three different scenario JL audio packages offered from mild to wild depending on how you like your music. Is there really someone who would go for mild and not wild on a Mystic? 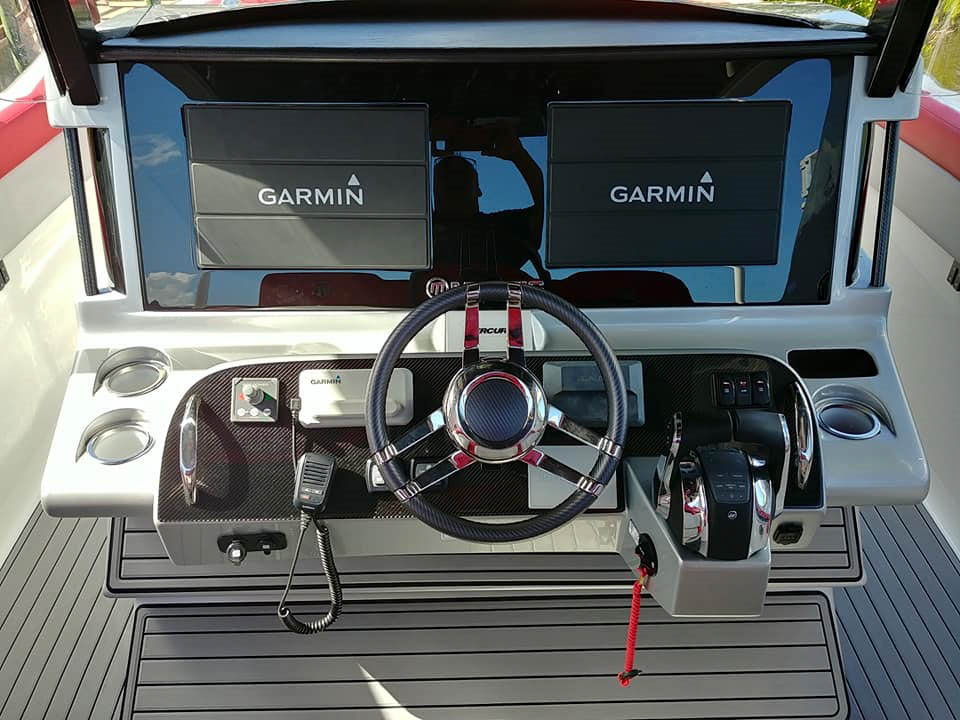 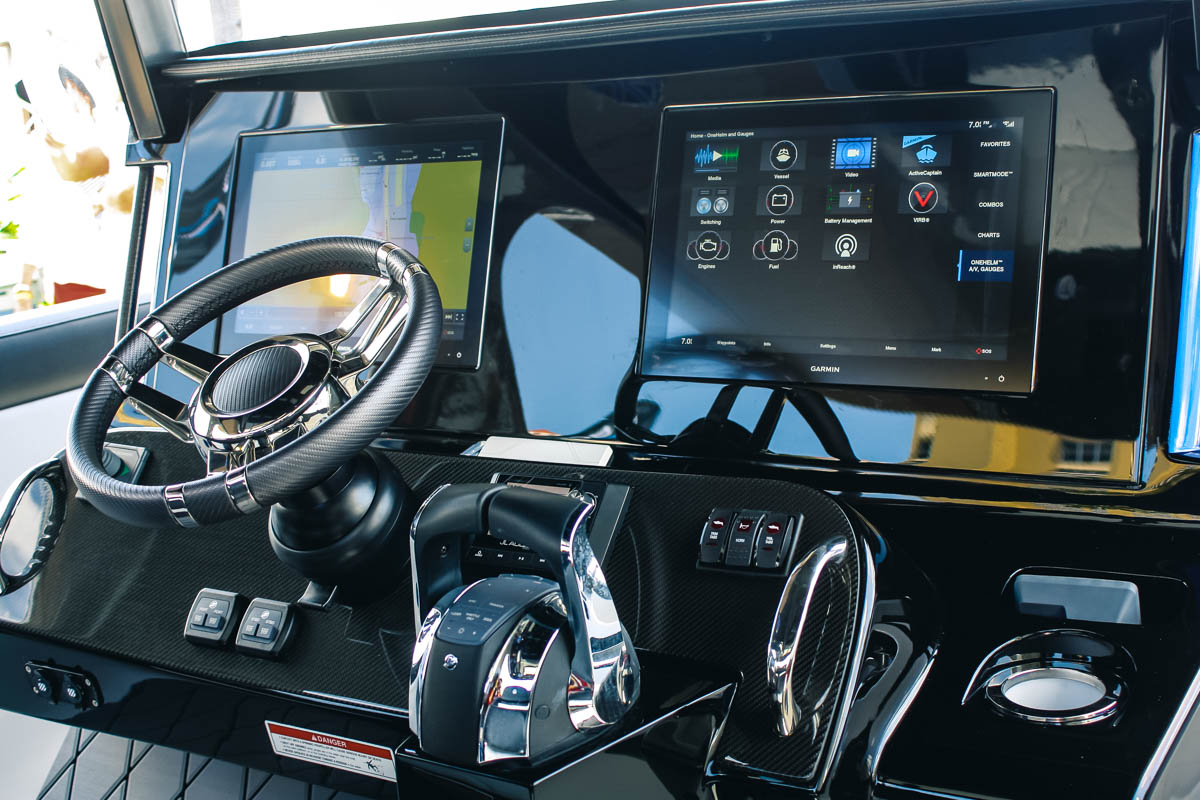 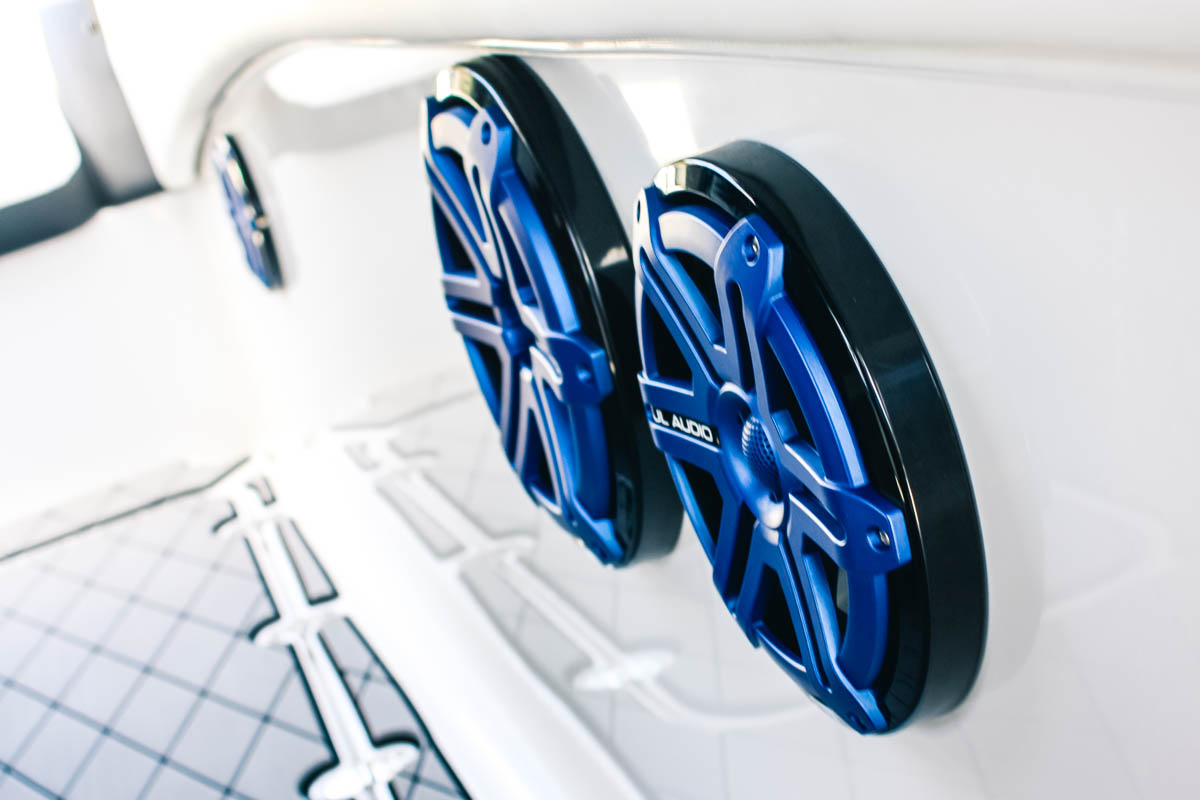 For nighttime boating escapades or just plain rockin' on the docks, the full LED lighting is an option and can be placed in the speakers and the engine cowlings, making the motors light up from the inside, as well as change colors.

If you've read any of my other features you may know already be aware of my fondness for durable decking. Well let you tell you Mystic knocked it out of the park with the 10mm SeaDek padding in place of the customary 6mm other brands are installing. 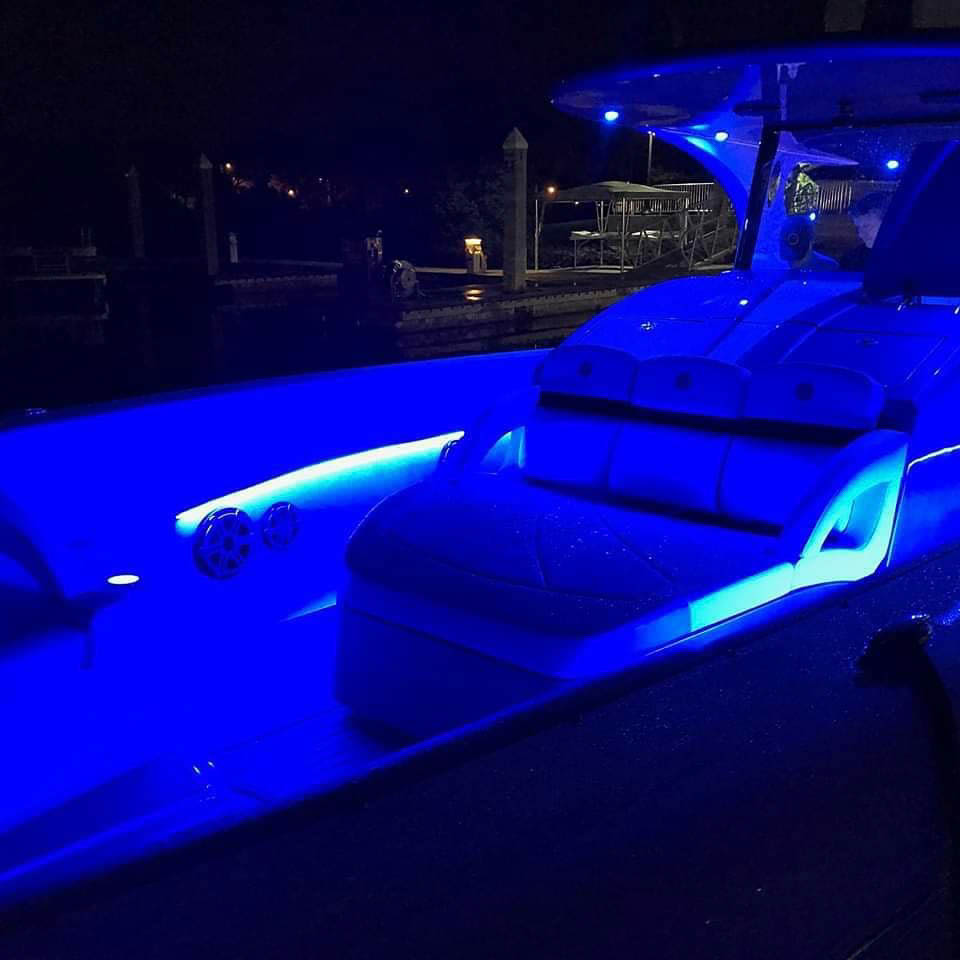 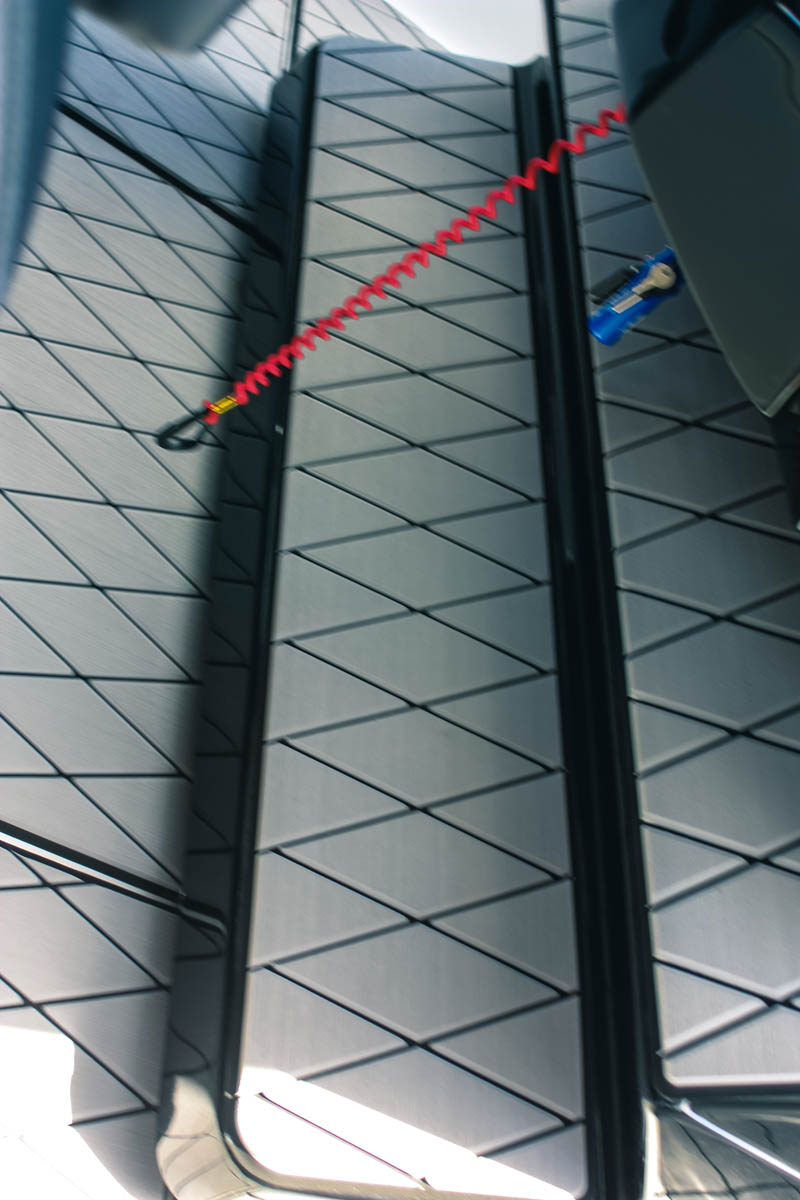 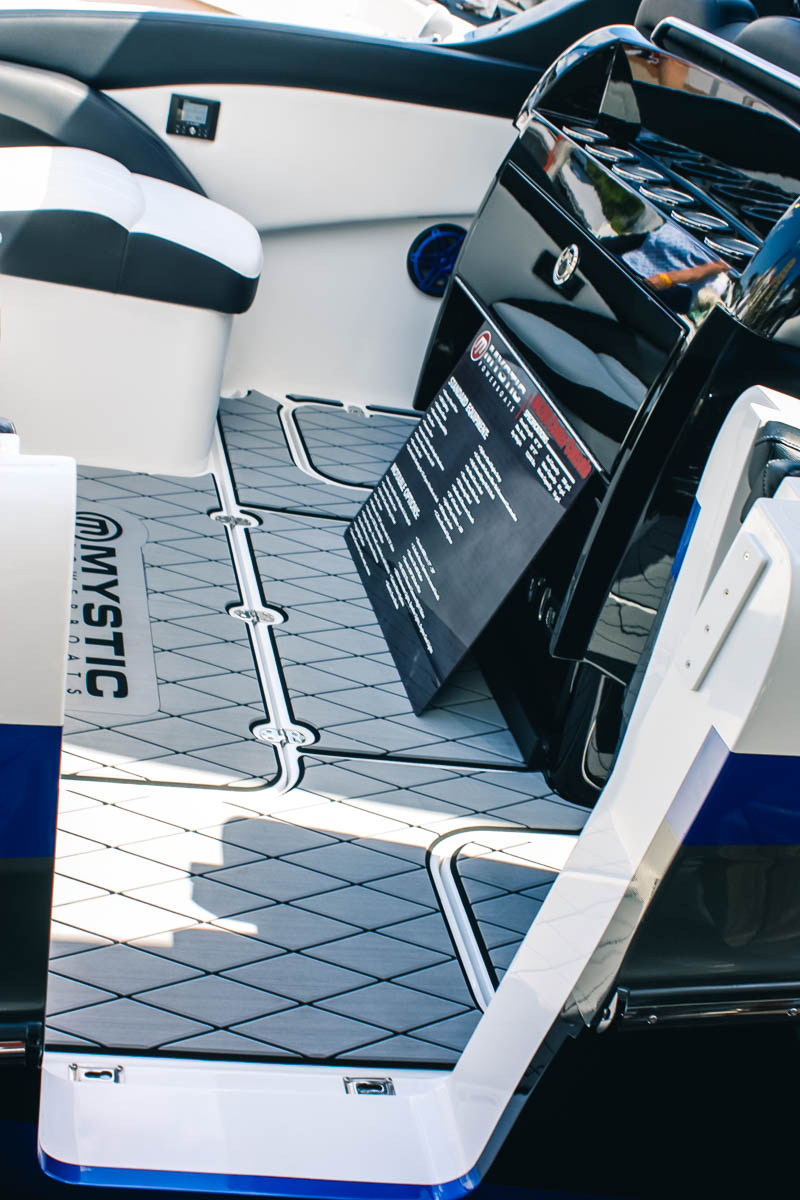 While a majority of the center consoles are built with a double forward chaise lounge in the bow, Mystic Powerboats has included a third spot and has struck gold by installing a remote access receptacle to control the boat's audio by folding down the middle seat, as to not inconvenience anyone to walk back to the helm to change the tunes. Voilà...  and just like that two additional cup holders are also located in the backside of the middle lounger when flipped forward for the music controls

Fenders are now being treated with more respect and have been given their own official compartment built into the storage area in the bottom of the bow deck, whereas the backside of the door has been designated with a set of clips for all the dock lines. 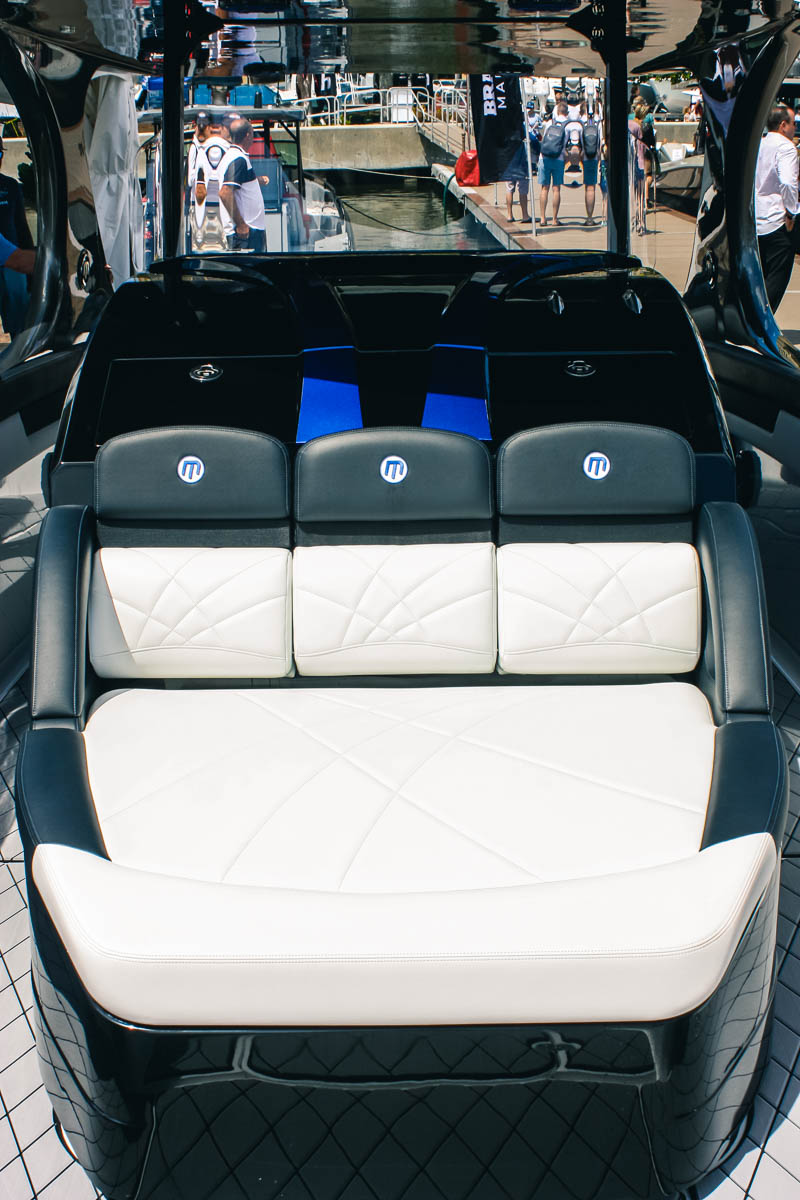 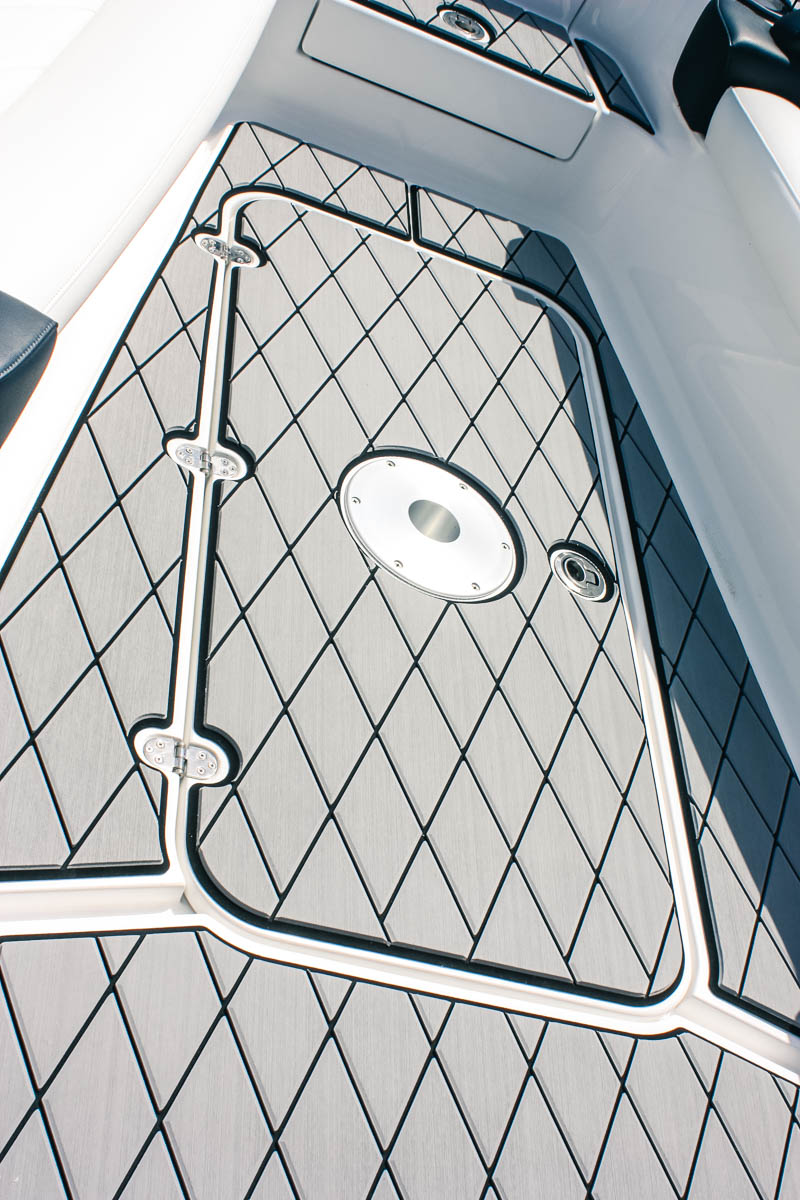 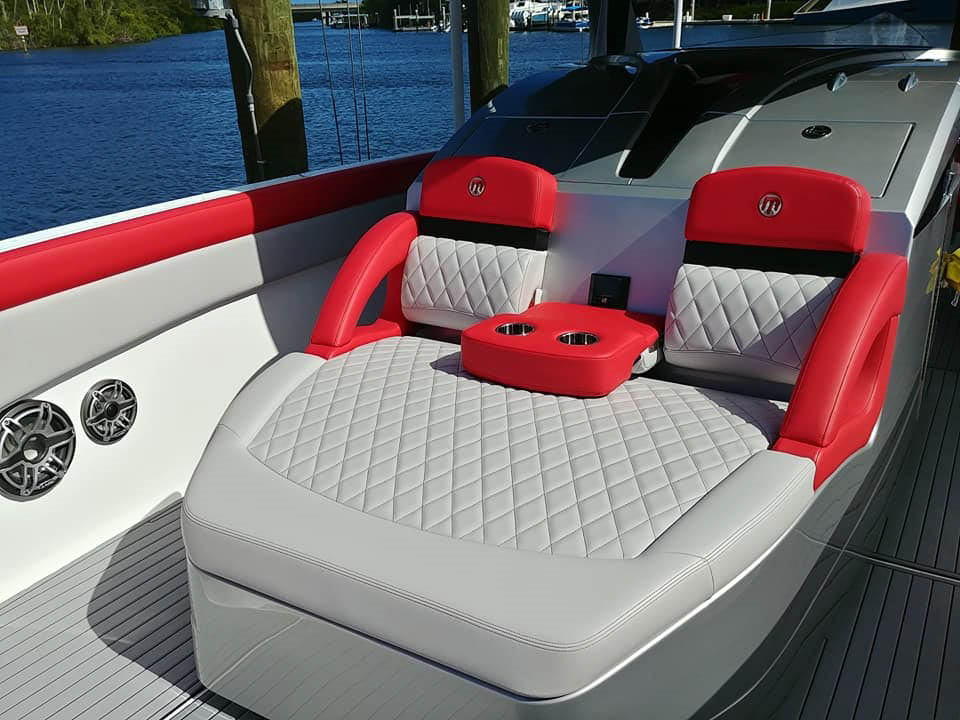 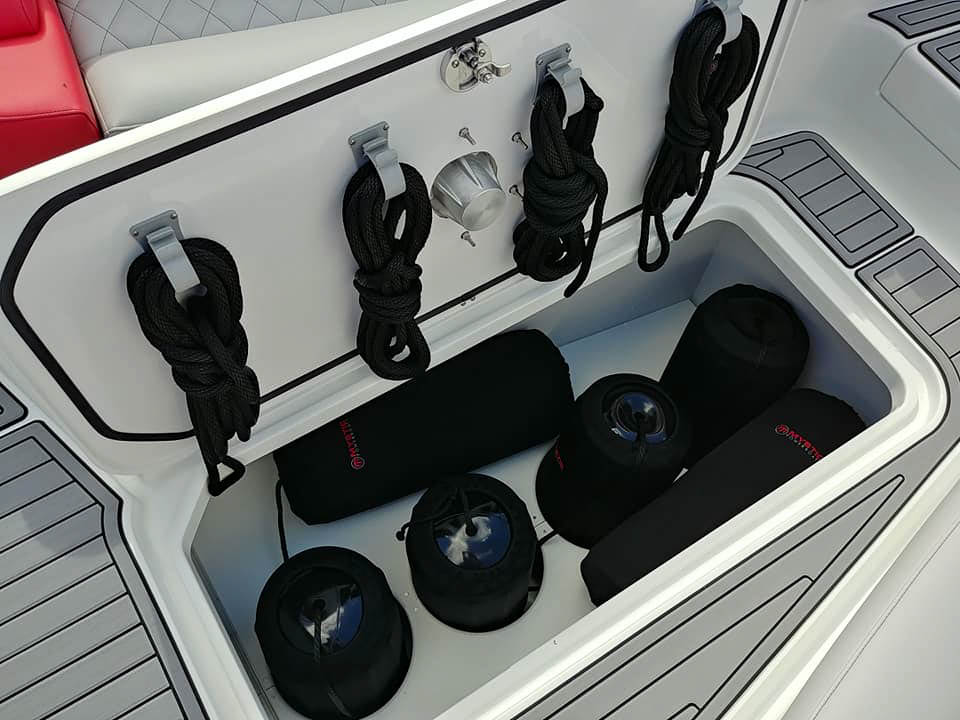 A dual purpose table housed down below in the cabin can be set-up in the bow for a lovely on board luncheon in the sun or serve as a place to set down your liquid libation. Additional frontal storage and a fresh water hose to rinse off the anchor are other important features.

And what awaits you upon descending down the steps of the port side entry door is a full cabin with refrigerator, sink, ceramic toilet and a large filler and spare cushion that turns the seats into a proper bed. The cabin table as previously mentioned can also be removed and place above deck. To escape the outdoor elements air conditioning and heating systems run off an inverter thus no generator is required. 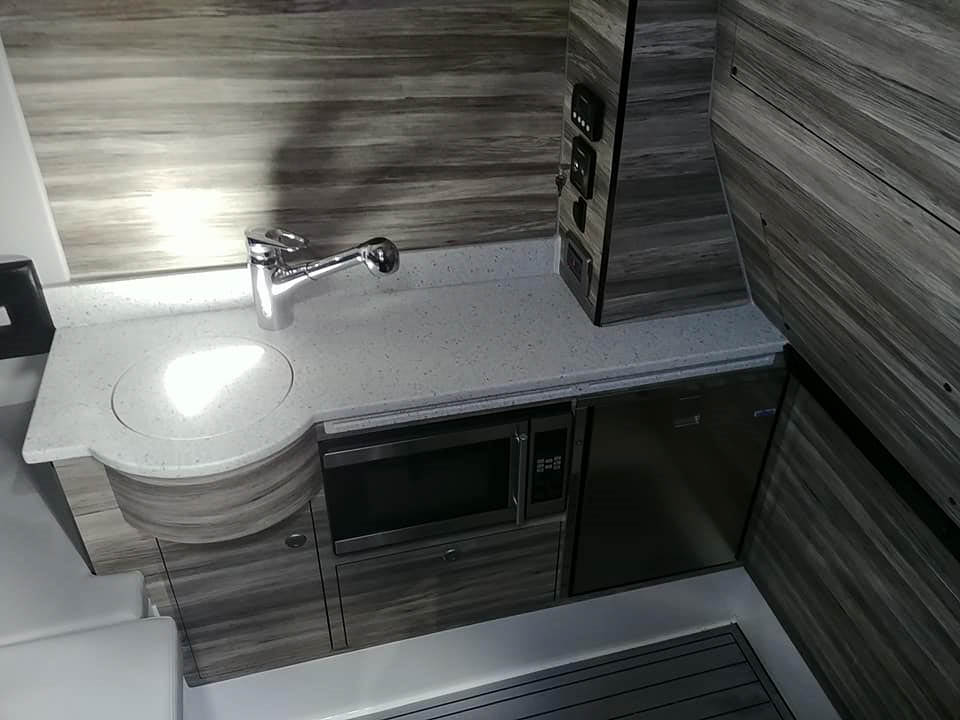 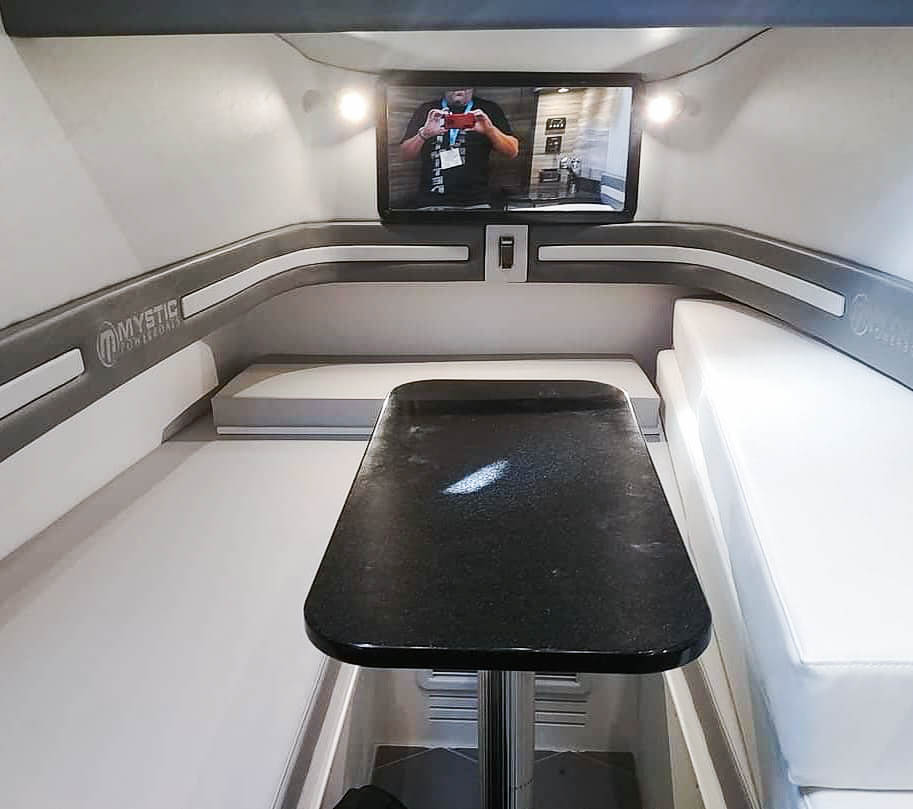 Depending on chosen amenities and which power platform is selected, prices run from $650,000 to $850,000. As you might have noticed the photos displayed throughout this feature are from more than just one M4200. LuxuryCenterConsoles.com has done this to provide our readers a better visual and let you opt for the tones and styles you find most appealing.

Mystic Powerboats has since expanded its center console line to include the M4200's pocket-rock little brother -- the M3800. LCC looks forward to showcasing this rock-star in the near future. Stay tuned!