Balancing an inner core of true performance and an exterior which exudes pure class and comfort galore – the M5200 is the Essence of Perfection. The sheer size of the mega center console conceived with a 14-foot beam and its enriched amenities has added a new level of maritime adventure to the Mystic Powerboats lineup… empowering owners the opportunity to escape on extended excursions, in addition to their one-day rendezvous.

The boating world’s first look at the M5200 came in late August at the Lake of the Ozarks Shootout. For Mystic Powerboats founder, owner and world champion throttleman John Cosker, the event was extra special. The date coincided with the 20-year anniversary of his catapult to offshore racing fame in the Tencara catamaran (the base of the Mystic C5000), as well as, the Callan 55 V-bottom.

For those who “missed the boat” in Missouri, without question, the Fort Lauderdale International Boat Show served as the public launch pad that put the 80-mph head-turning pleasure-seeker on the map with the masses… or at an asking price of $2.7 million, those with masses of cash.

Watching the influx of interested aficionados flock to the M5200 propelled by a four-pack of Mercury Marine 600-hp V-12 Verado outboard engines was nothing short of mesmerizing – hence the title! To say the 26,500 pound (dry weight) powerhouse stole the show is an understatement. Arriving early on opening day was a good thing, as I was fortunate enough to find the always-accommodating John Cosker with a few minutes to spare to personally share his insight into the build.

Slipping off the shoes and hopping onto the stern, the elaborate diamond-quilted, contrast-stitch upholstery (think Rolls-Royce Phantom) and faultless faux-teak flooring caught my attention before realizing I completely sidestepped the four Merc 600s taking up transom real estate. I must be blind or maybe blond, because the gargantuan outboards really do complete the boat’s commanding aura.

Unparalleled in its display of master craftsmanship, next my eyes moved to the massive all-glass wrap-around windshield (no acrylic here) and carbon-fiber hardtop to hone in on how many speakers and screens were present. Then after a peek below at the Mystic-monikered slide-out cooler, it was time to start counting bolsters. 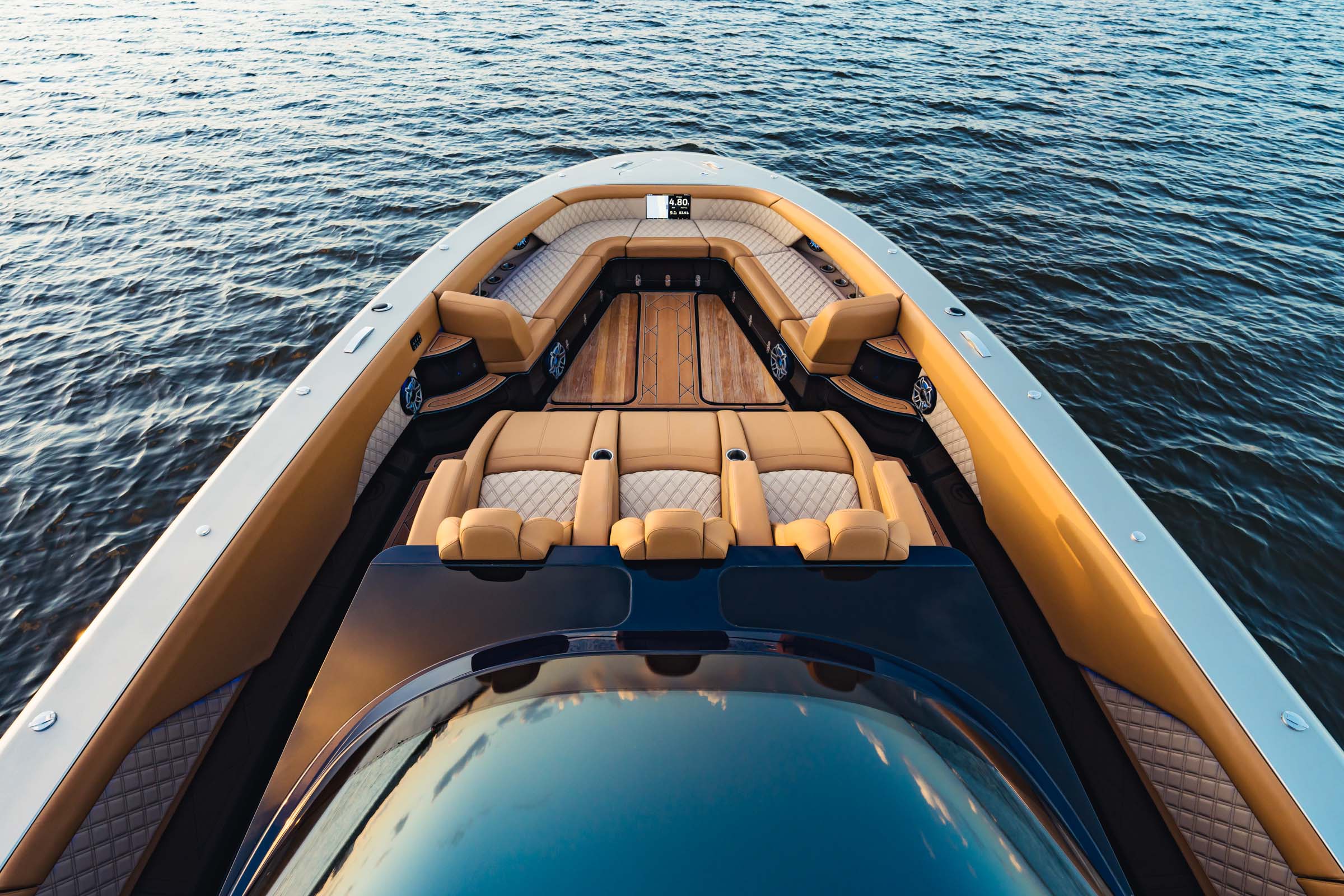 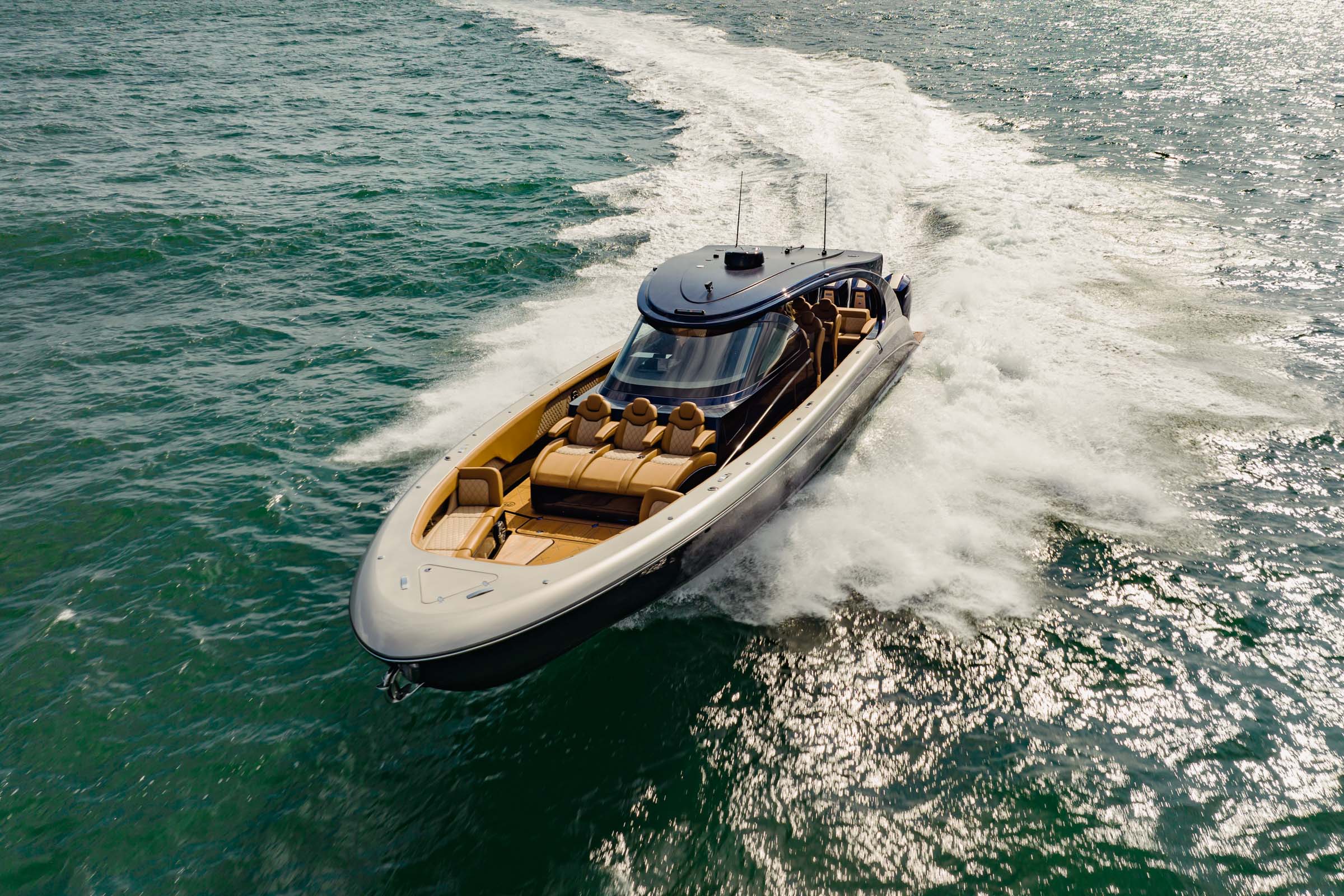 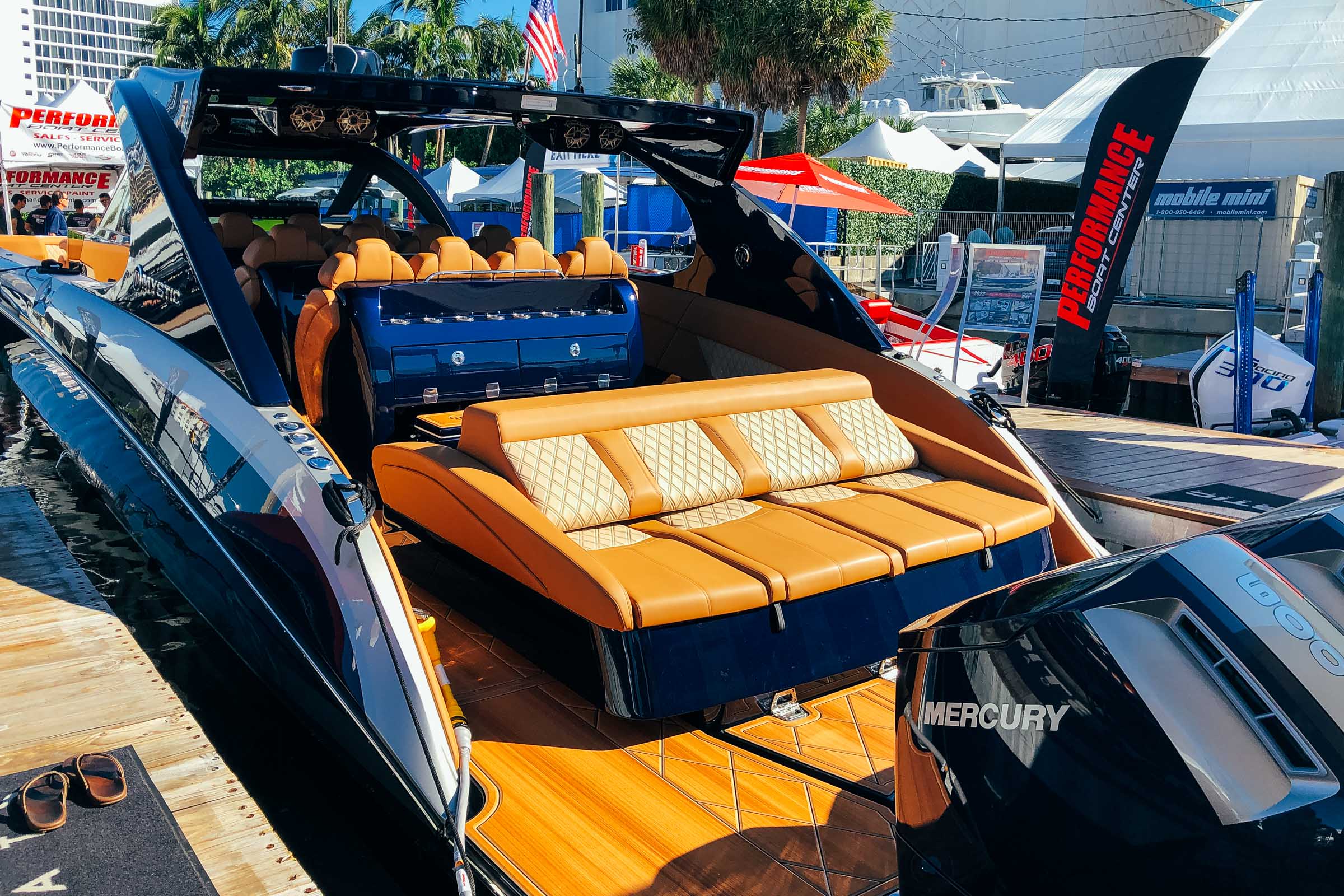 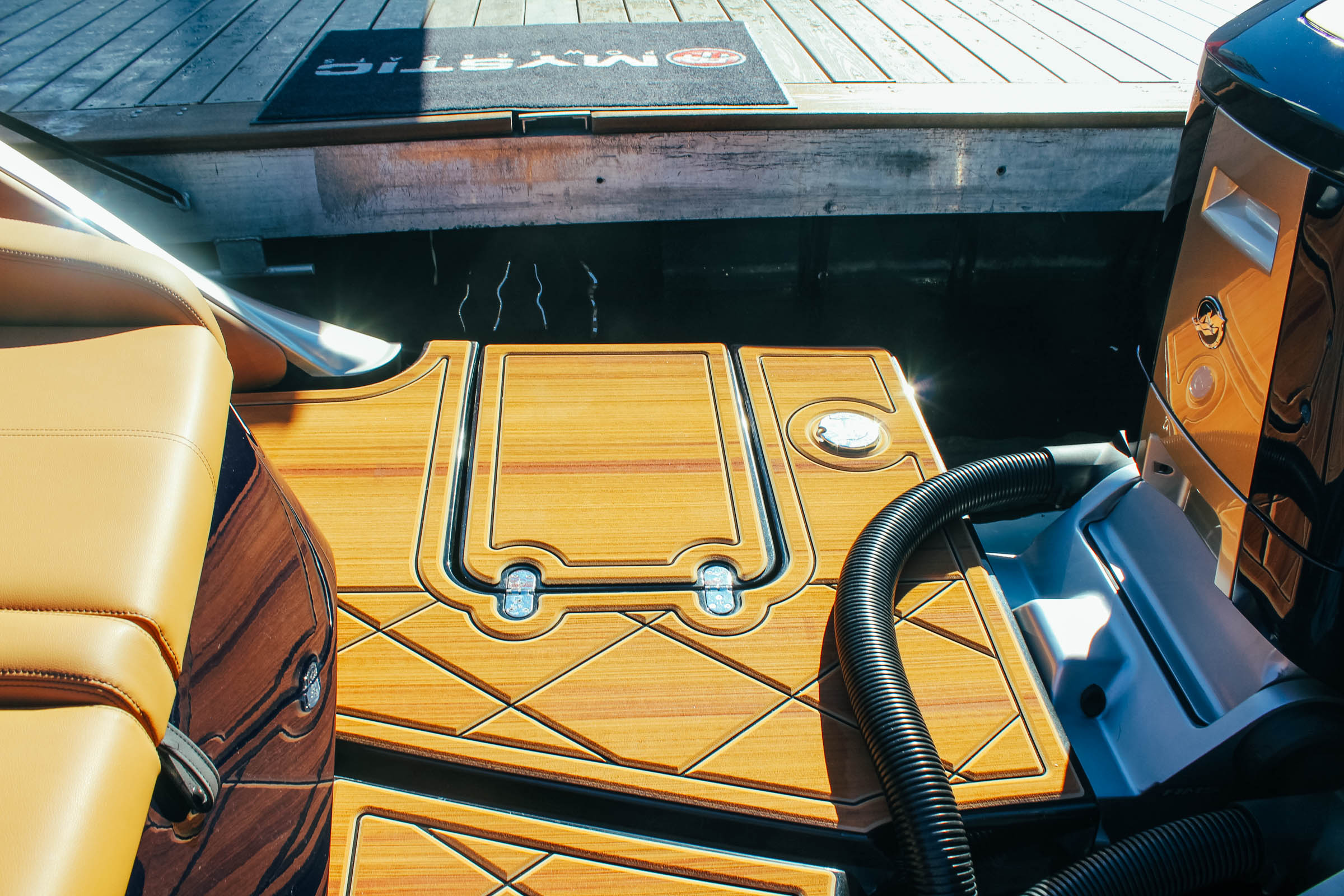 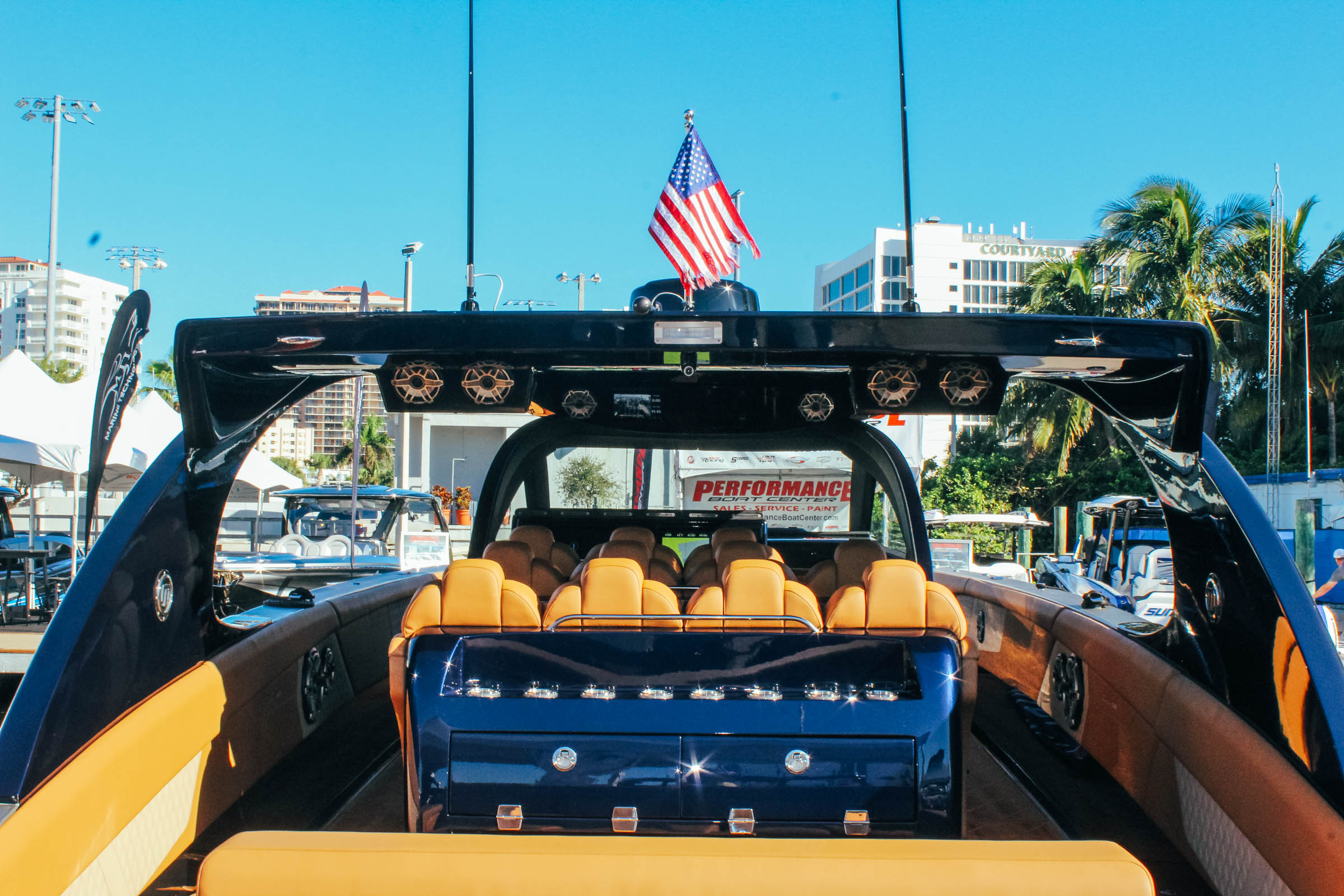 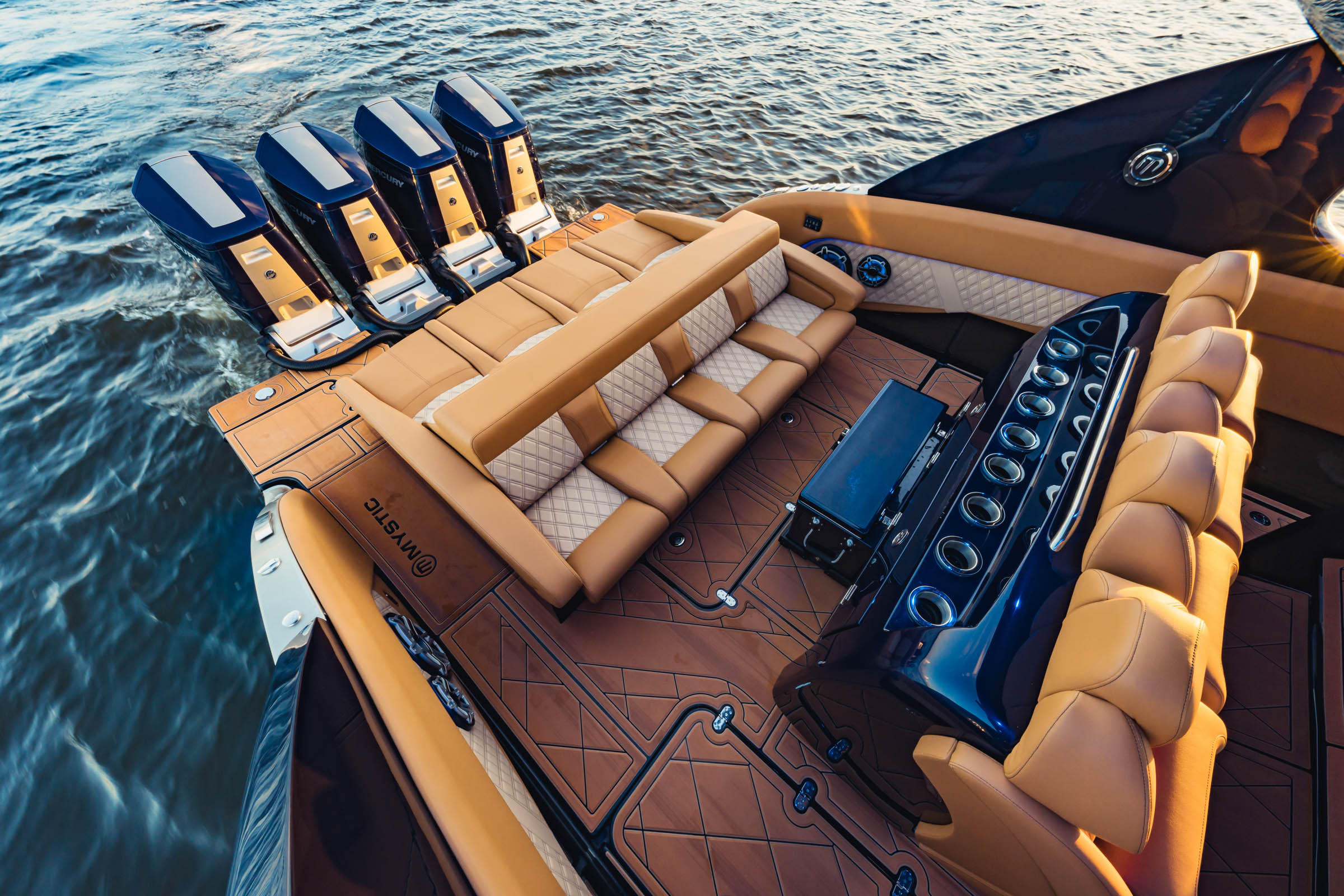 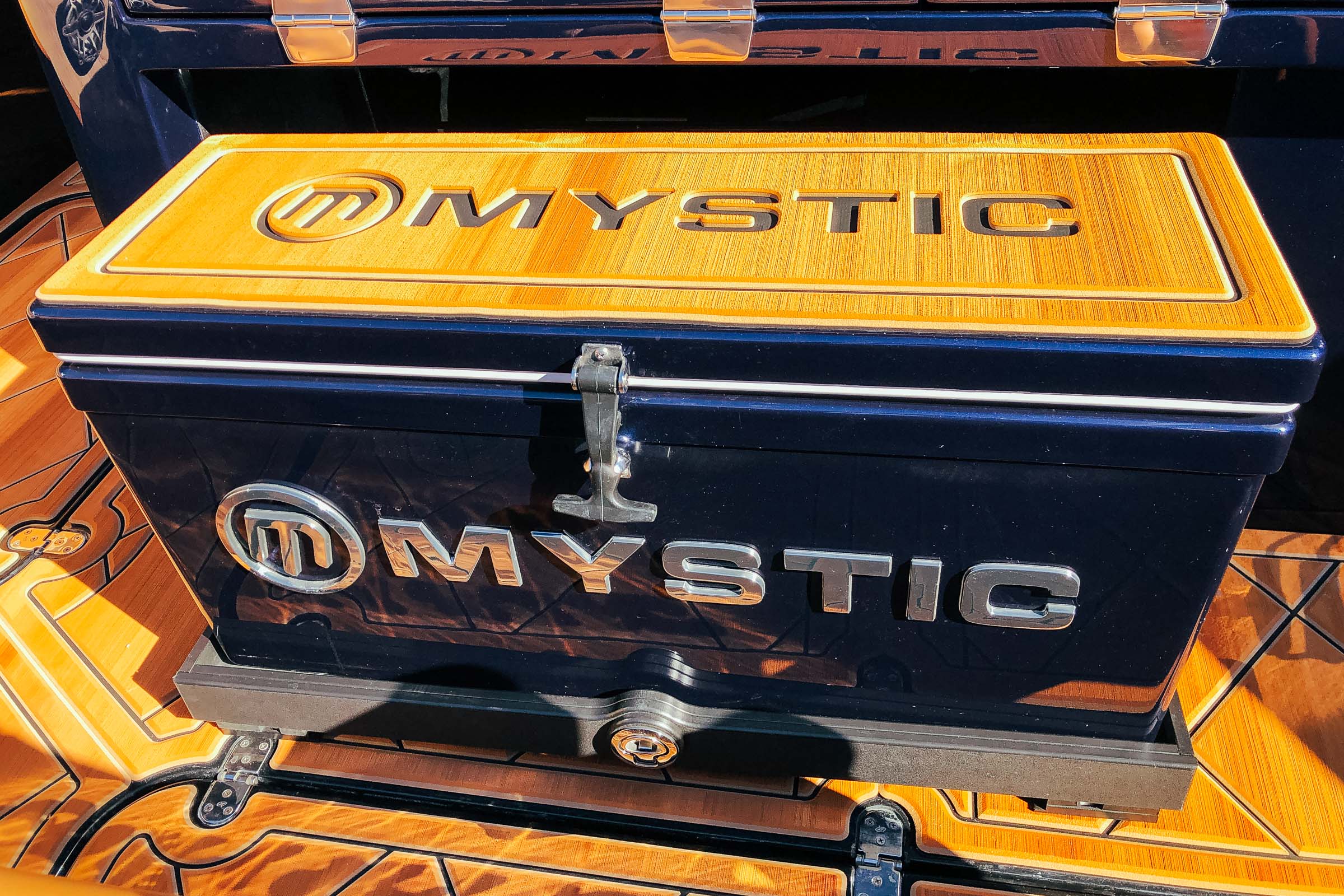 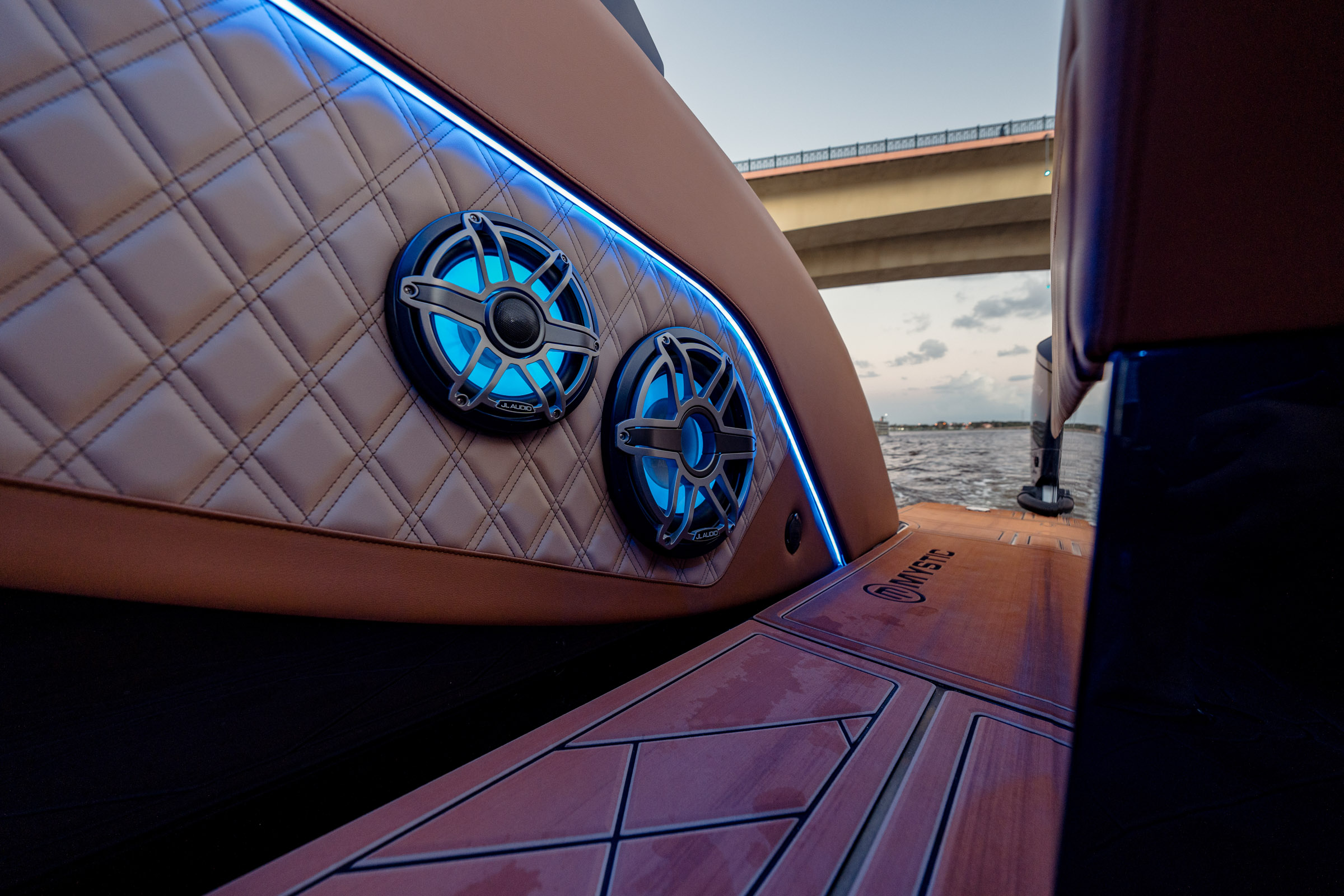 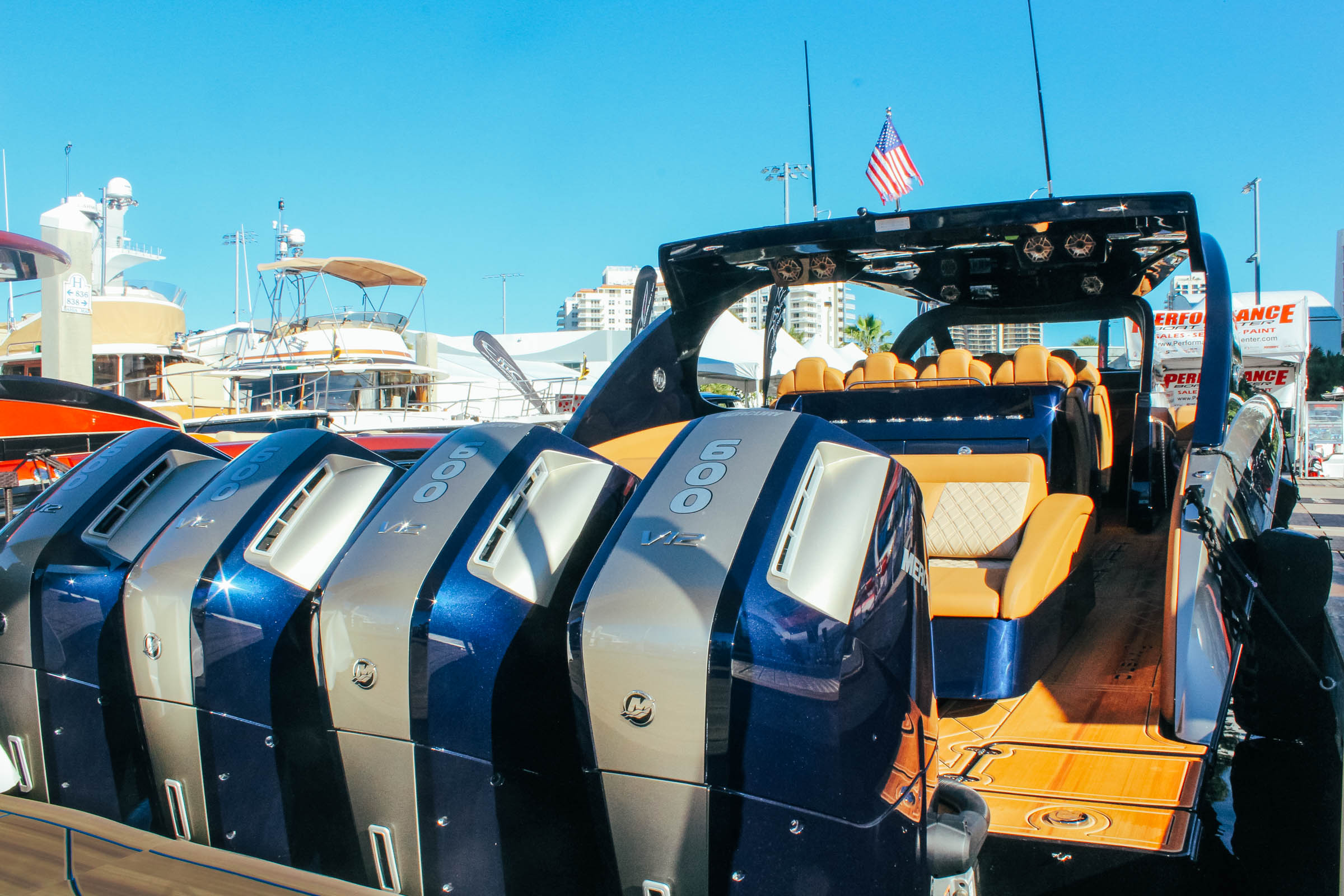 Available in 7 different arrangements, no matter which way it’s customized, the M5200 is stocked with more seats than an AMC Theater. Not only is it the first-ever Mystic, it’s the first center console of its size in general, to be built with three rows of bolsters for eleven bottoms (the back two rows each have four sculpted seats.) Cosker explains, “We configured the first prototype hull this way figuring we would always be loading it up with lots of people.”

He was right. Lots of guests were given the green light on Friday of the Shootout weekend. In the middle of the main channel chock full of feisty Ozark chop, half the load locked into the bolsters, and the remaining ten secured their spots on the foredeck, designed with an inviting triple sunpad lounger and ample U-shaped wraparound benches at the bow.

The best part of the test was hitting a “bragging rights-worthy” max speed of 77 miles per hour with 22 guests aboard. Truly a pinnacle of achievement, in recent days the boat has become a real game changer for Cosker who always ran his own personal demo M4200. He currently has a new 42 in paint and following the trip down to FLIBS, he decided to put it up for sale and will continue to campaign the new M5200. I can’t blame him! 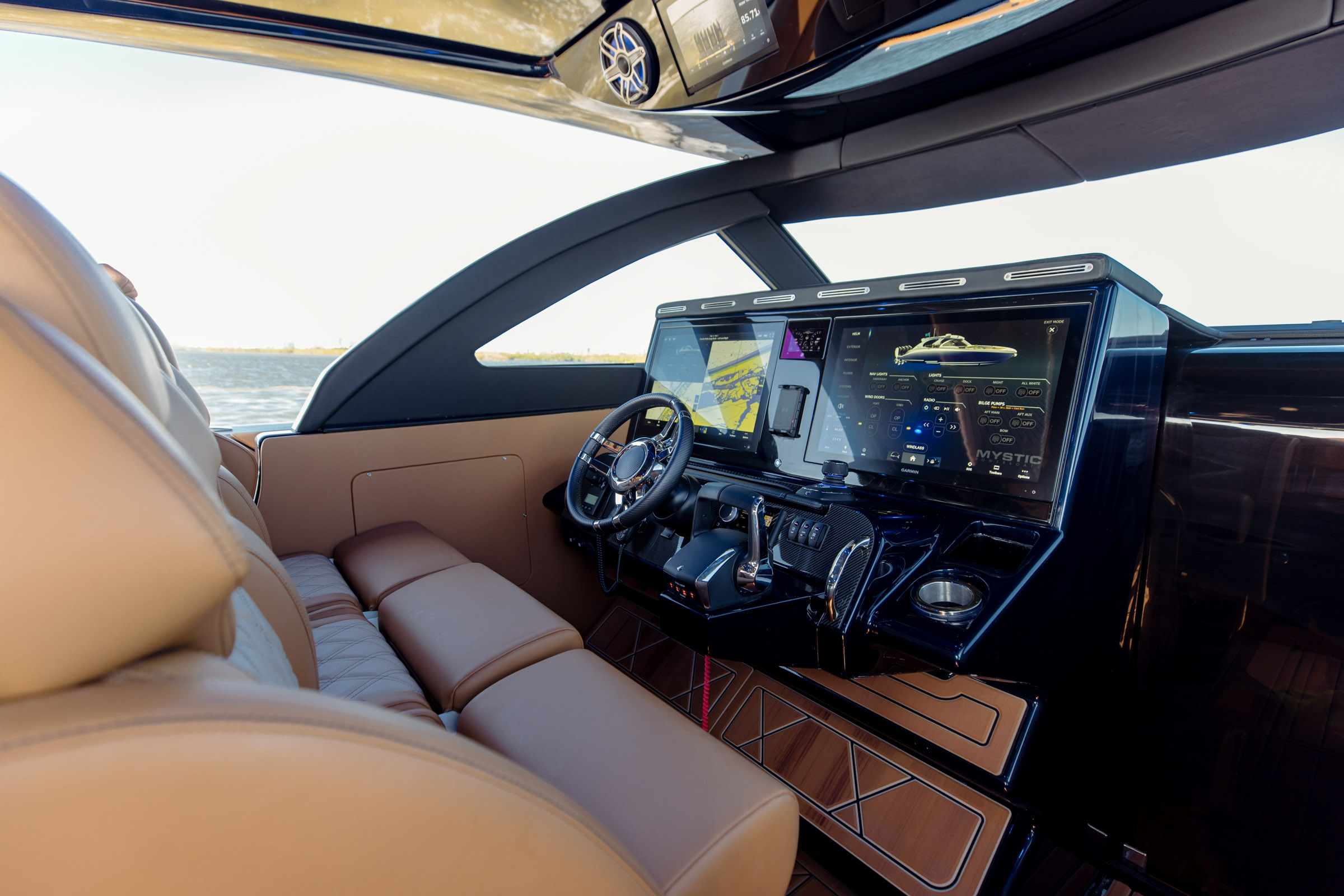 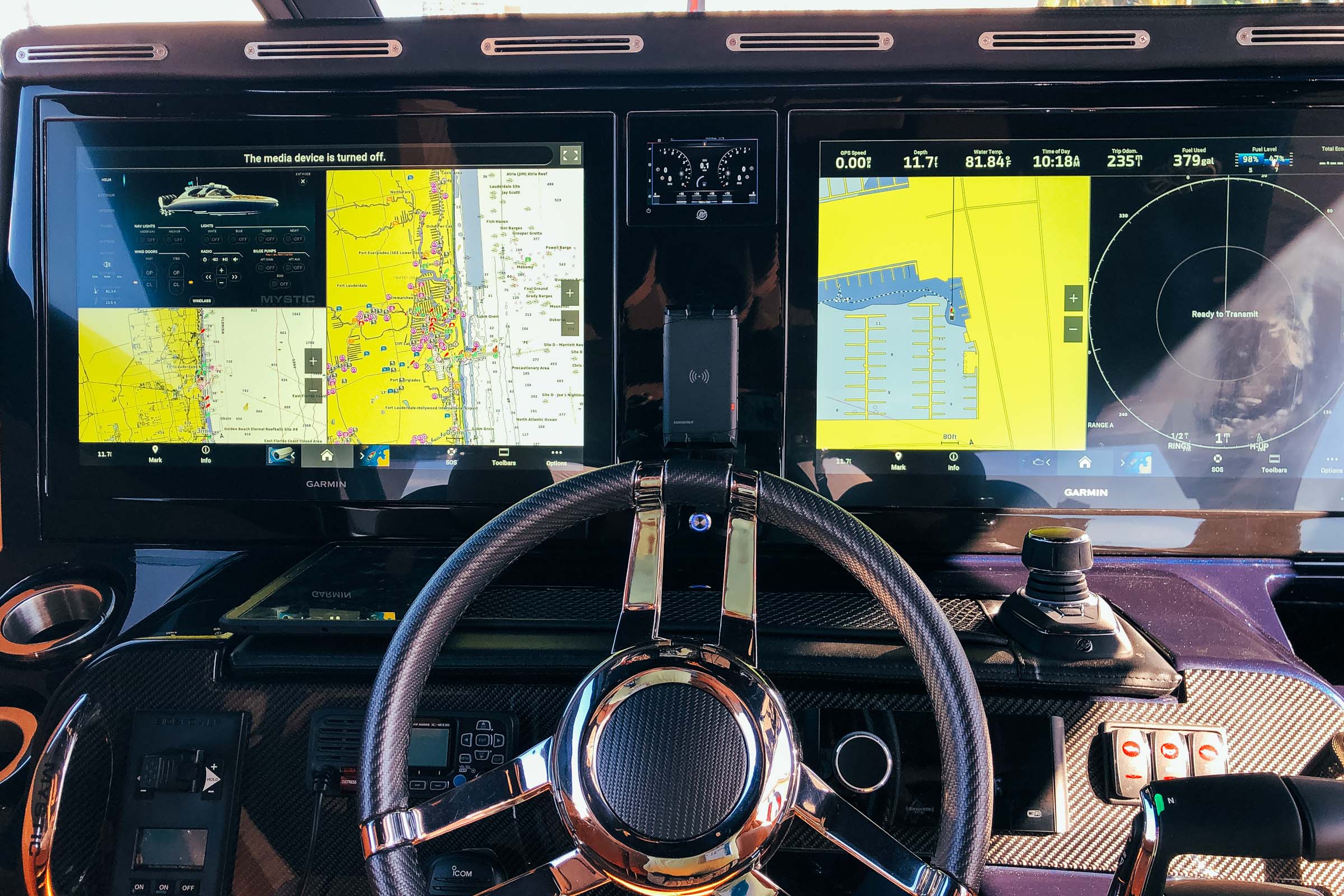 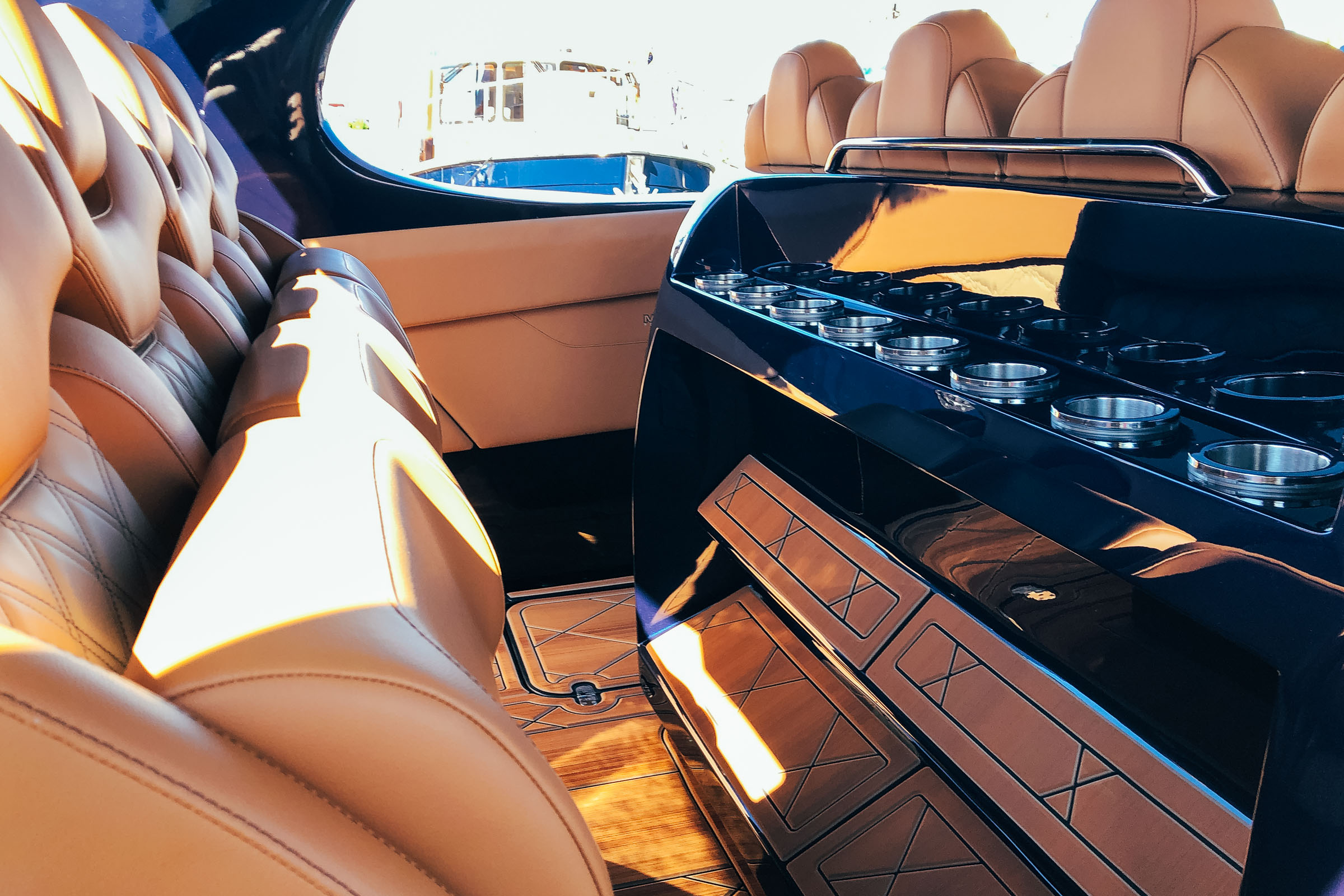 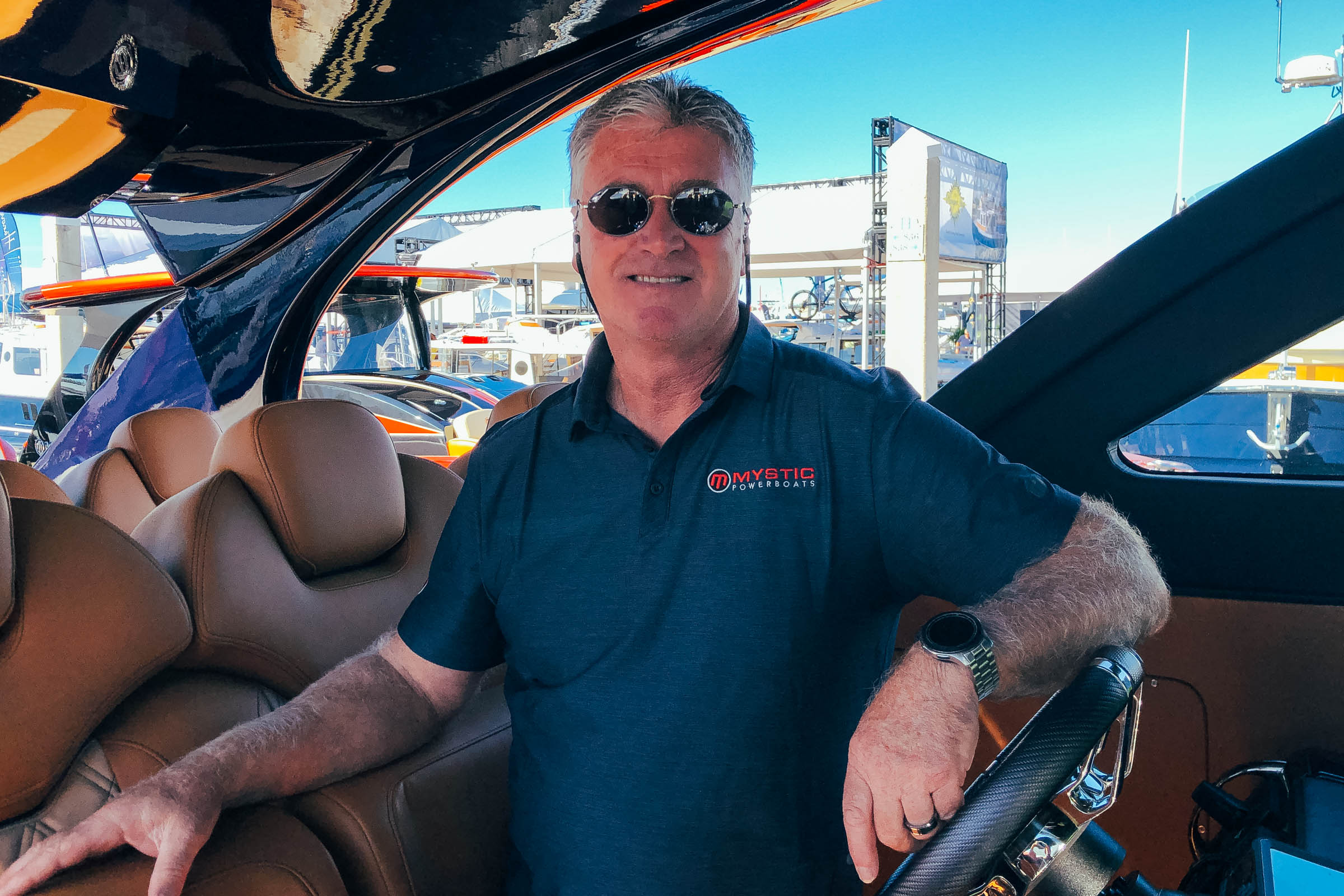 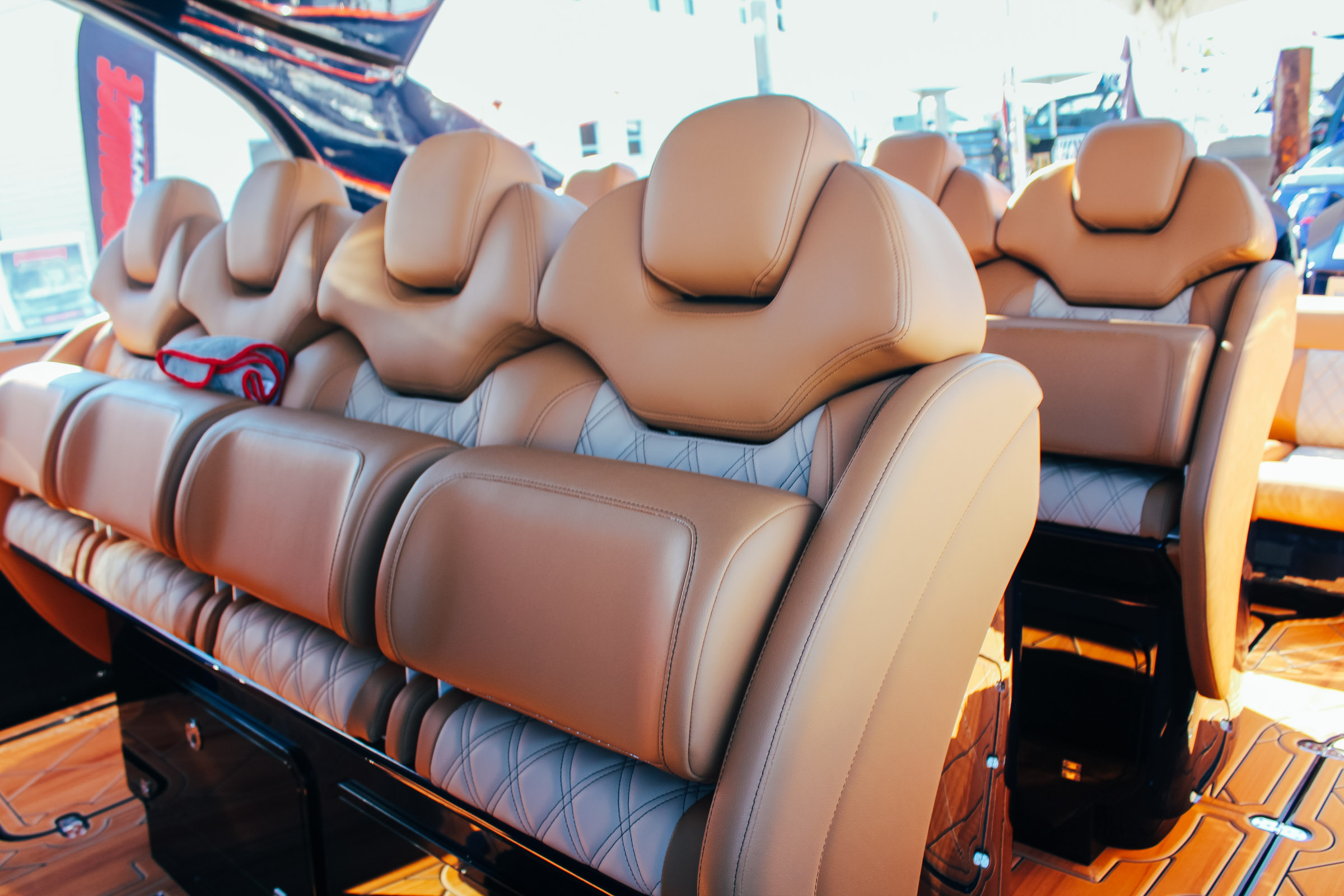 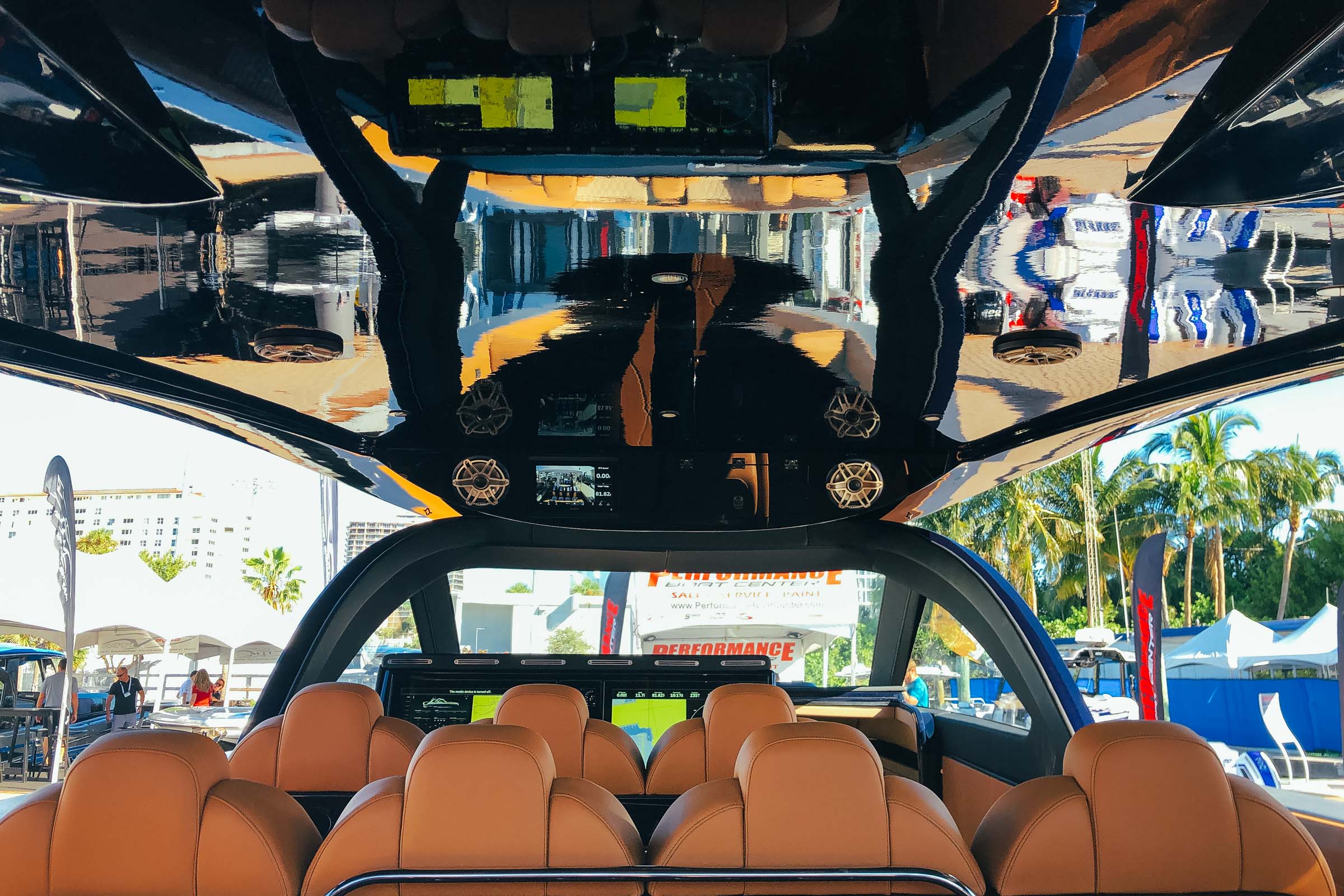 Apart from giving off notes of exterior elegance, the boat ridicules rough water because deep down its screams of high performance DNA. Construction of the range-topping M5200 is based off Mystic’s M3800 and M4200 models. The three siblings all feature a foam core with infused epoxy and carbon-fiber reinforcements. You can refer back to our special Mystic factory tour from last year to get a better feel for the magic that happens at the DeLand headquarters in Central Florida. https://www.riverdavesplace.com/xenforo/articles/mystic-goes-ballistic-leading-the-way-in-performance-powerboats-and-popularity.841/

Thanks to a major in ocean engineering and high-speed small-craft design at Florida Technical University and a life-long affinity with innovation, much of that magic begins in the head of the head honcho himself. Fortunately, the M5200 is home to one of those “Cosker designs” due in part to the electrically-controlled wind-blocking panels on the sides which do more than just knock the wind blast down. “I was afraid it might get too hot in the cockpit, so we left the lower sides open whereby allowing air generated from the wind-blocking doors to come up through the cracks and swirl around, but obviously with no wind hitting your face,” explains the naval architect. Pleased with the outcome, “It’s fantastic, I absolutely love it,” was his next response.

The cockpit was definitely cheery and airy, but the real cherry on top came as I entered the air-conditioned cabin below. The blast of coldness greeting me on yet another sticky 90-degree boat show day was as beautiful as the décor emulating what you’d expect to see on a yacht. While the M5200 slots in the performance category, according to Cosker, it shares the beam with probably that of a HCB Sueños or Scout 530 LXF which means the spacious lower cabin includes benefits such as: an enclosed head and separate shower, a large-sized fridge, and a small aft cabin which functions as a great place to stick the kids.

The Numbers Game: Speed and Sales

Mystic calls it a performance boat and the 80-mph top hop hit during summer testing on Lake X in St. Cloud is jaw-dropping for a beastly craft of this magnitude, but equally insane are its other numbers in the game. Time to plane is almost instant since it’s capable of remaining on plane at under 20 mph; and with a fuel tank that holds 650 gallons, owners can enjoy a 300 mile range with an average fuel burn noted near .63 when cruising at a sweet spot between 40 mph to 65 mph.

No matter the speed, whether cruising or bruising the waters at full throttle, as of today a total of six M5200 hulls will be trading hands. The Mystic team will retain the first as a demo, the second is off to Europe, and the third will come equipped with six 450s (the 450 package is offered in four-, five- or six-outboard combinations) even though Cosker highly recommends going with four 600s because of the technology built into them and how flawless the boat runs.  Another hull will be housed at LOTO, and as of writing, No. 6 remains in production and is estimated to be ready by fall. 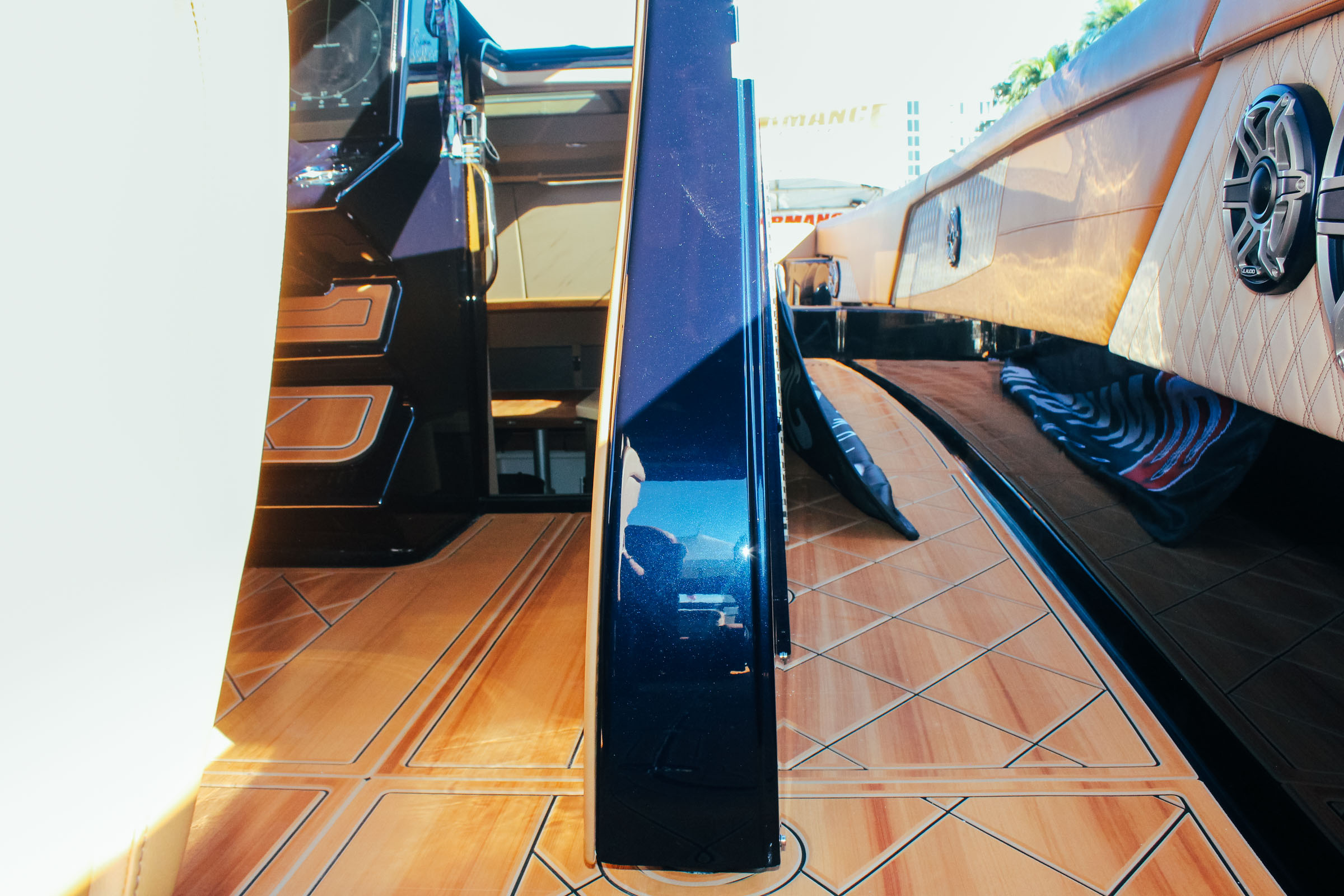 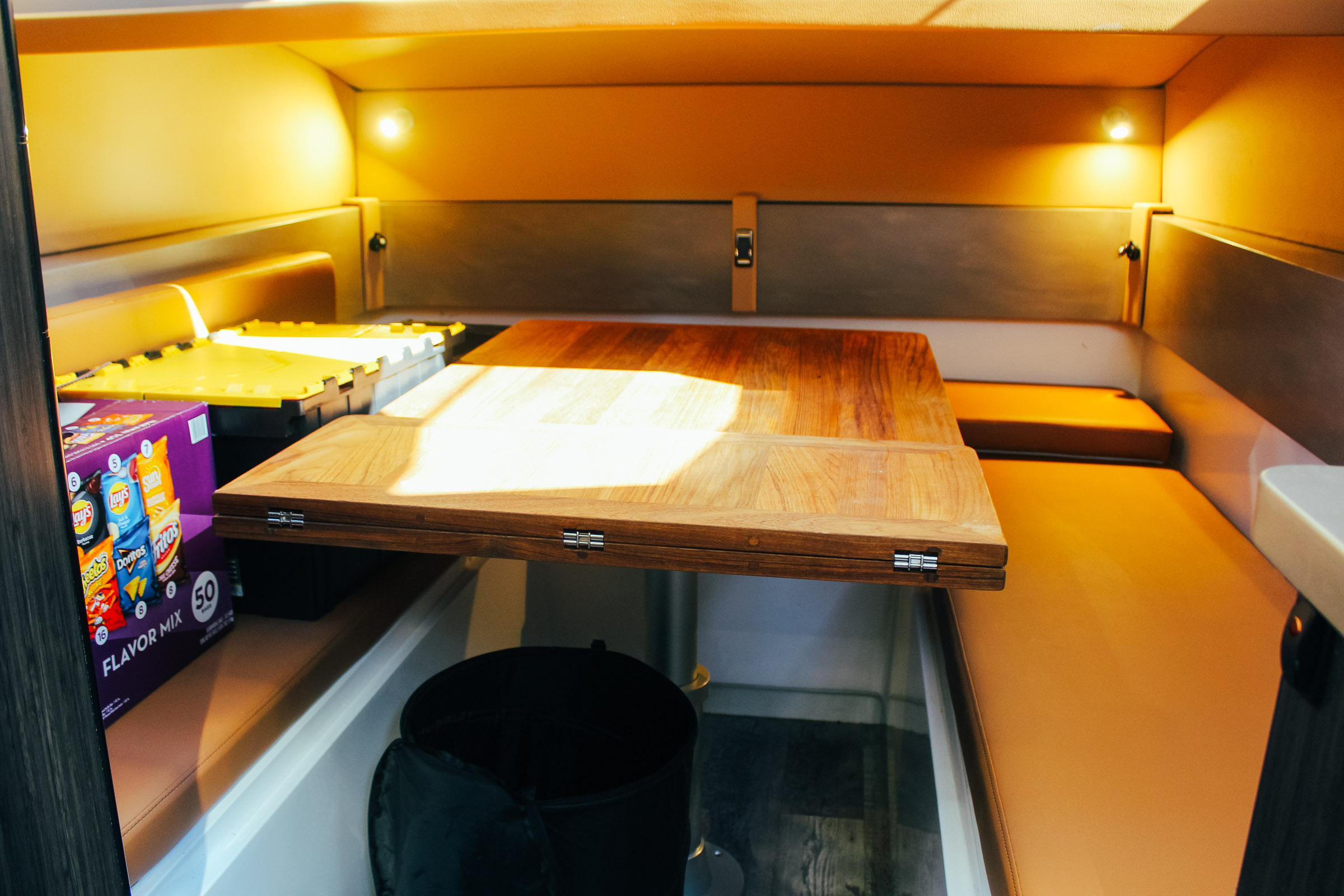 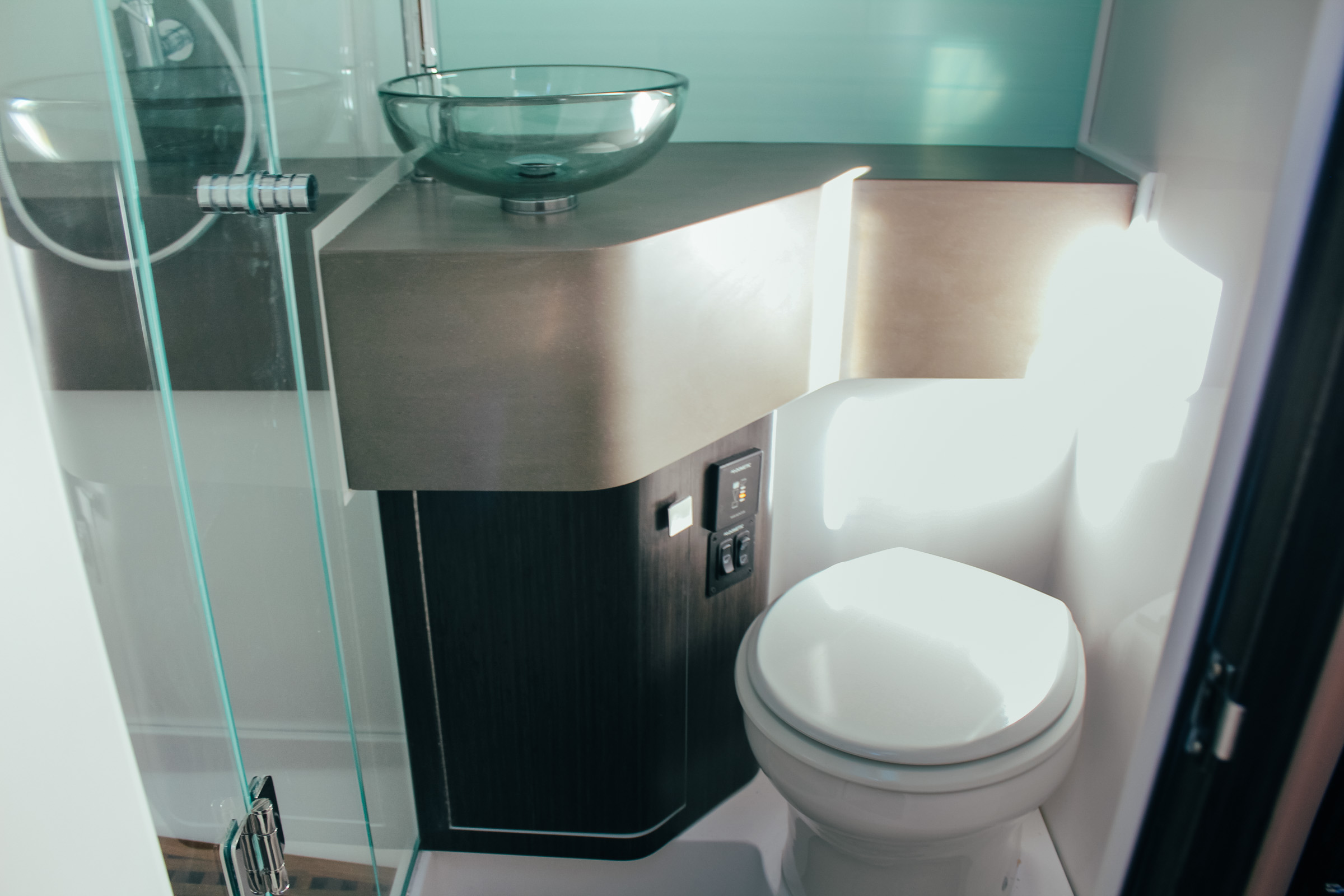 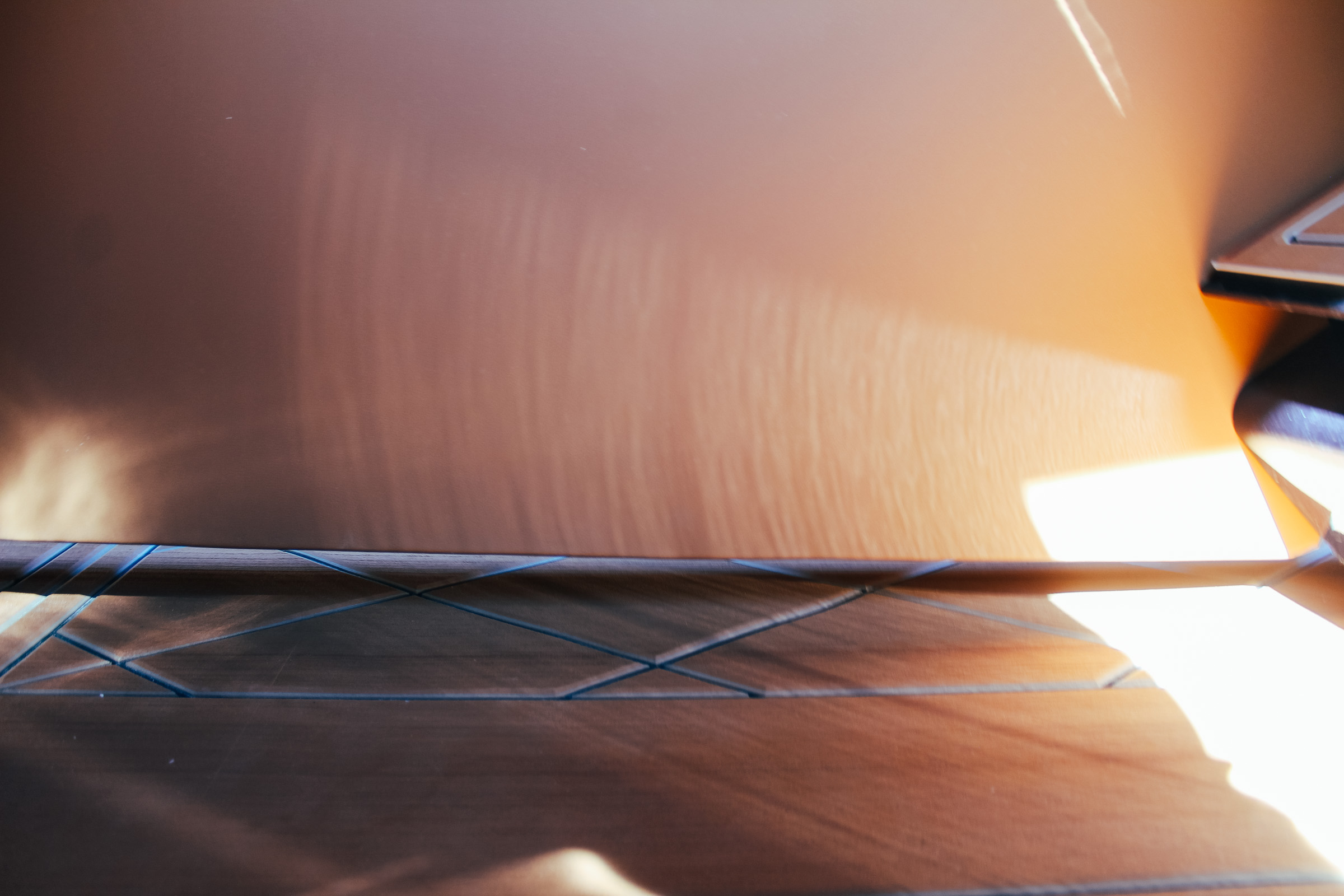 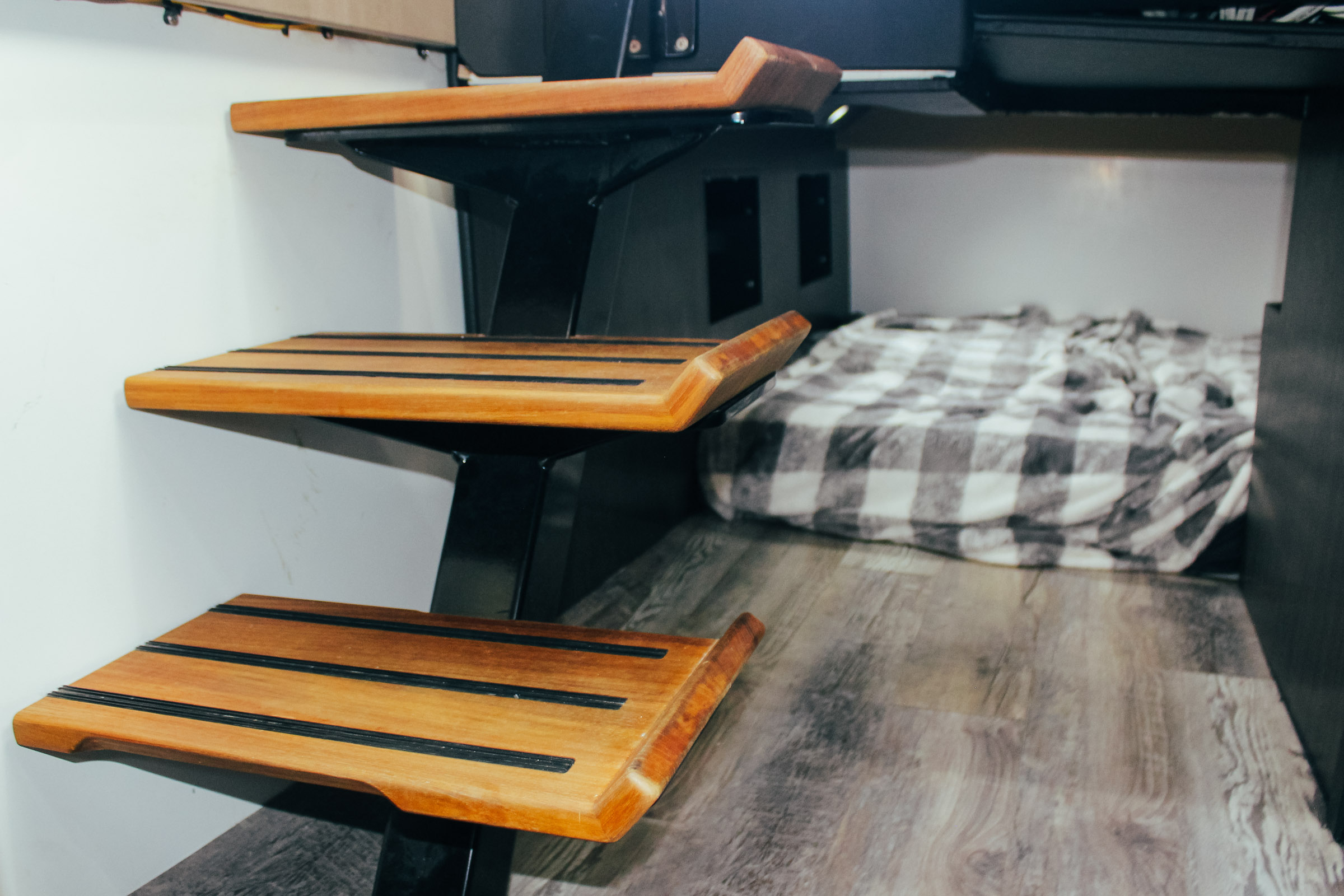 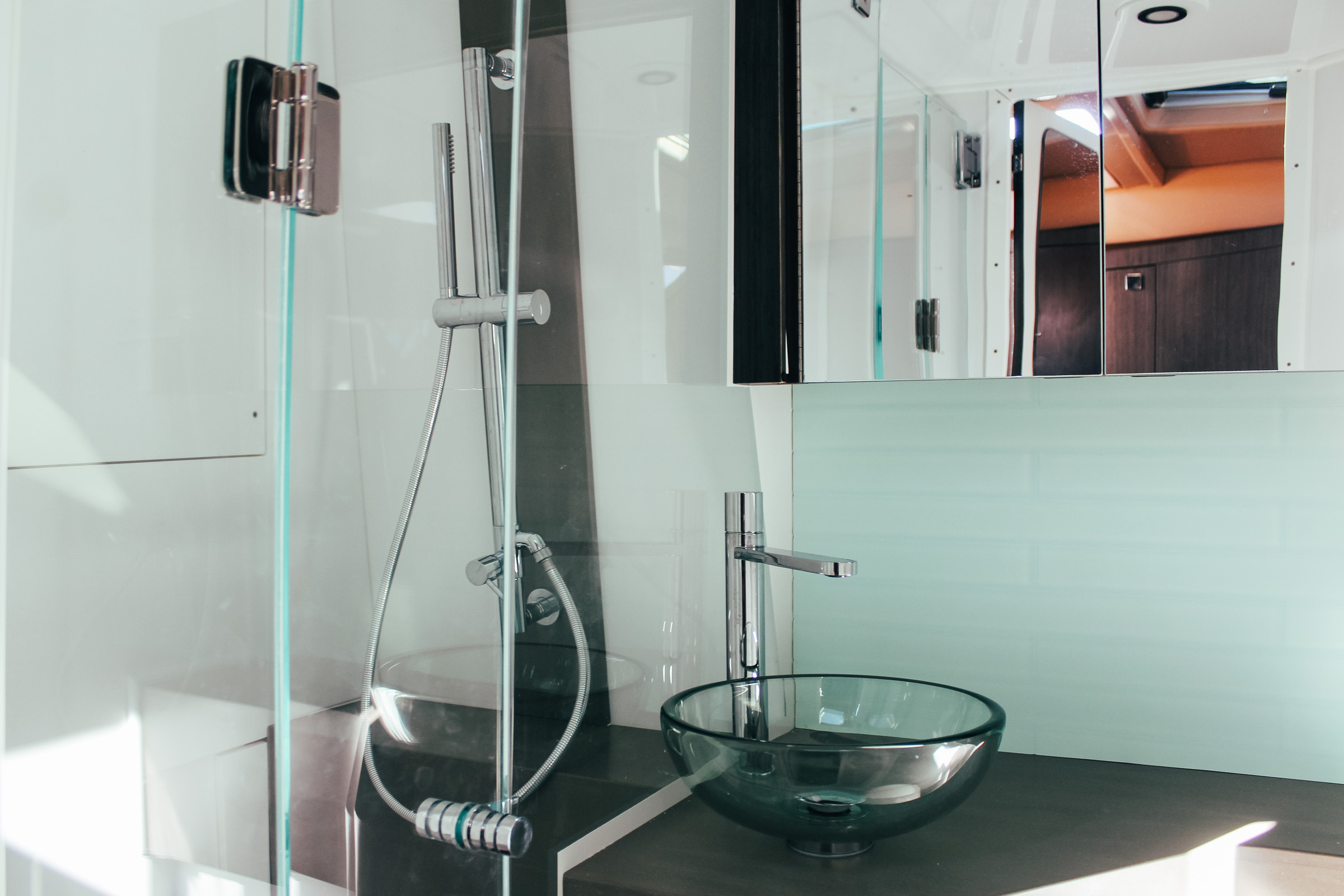 Back to hull No. 1, the first M5200 arrived to Fort Lauderdale with 66 hours logged in. And after leaving the Bahia Mar dock just a few days ago, preparations are now underway for the Mystic flagship’s first Florida Powerboat Club poker down to Key West alongside an estimated 300 other marine marvels (with split departures on both Wednesday and Thursday). Packed with 2,400 ponies, the M5200 will absolutely be at the front of the luxury center console cavalcade! 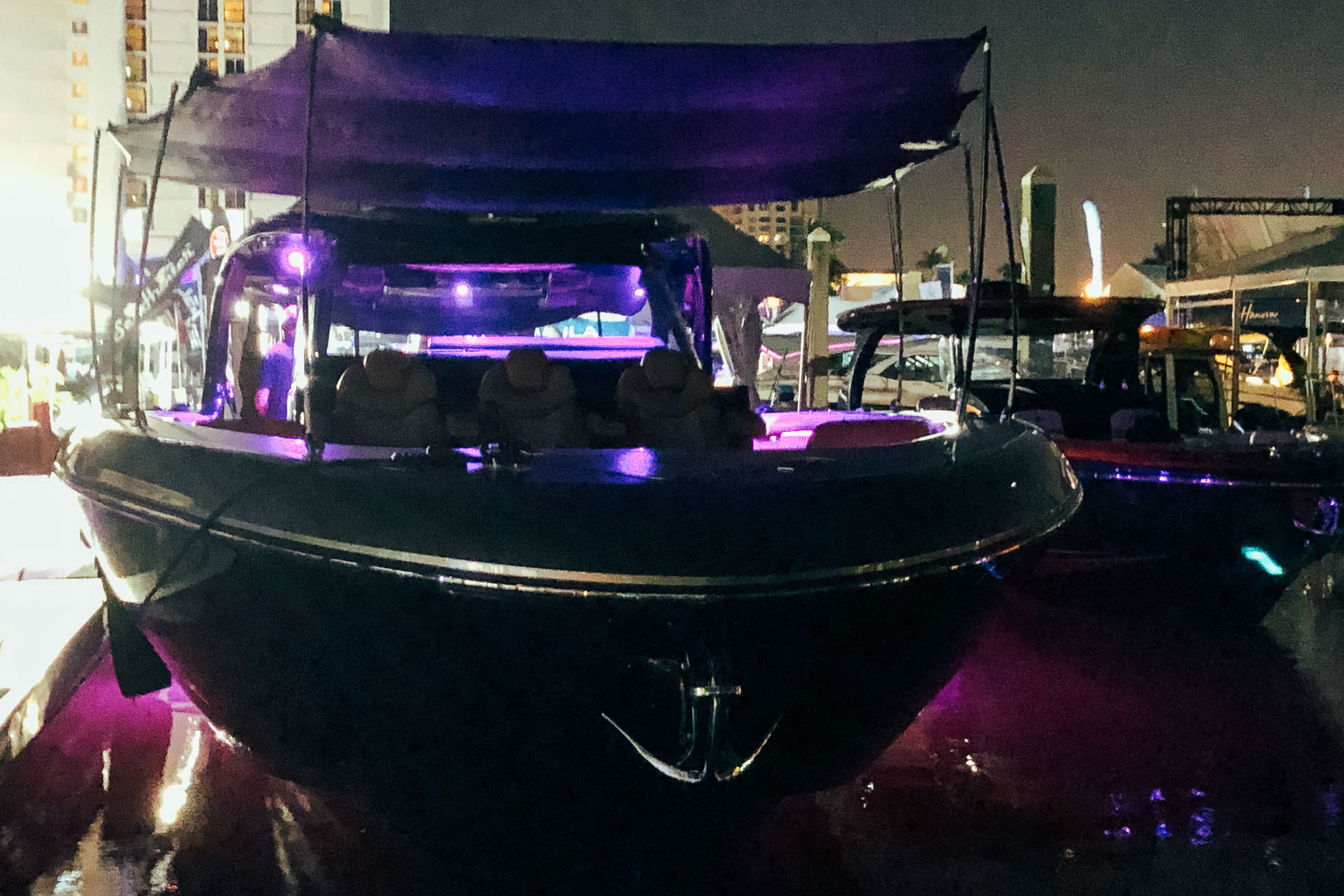 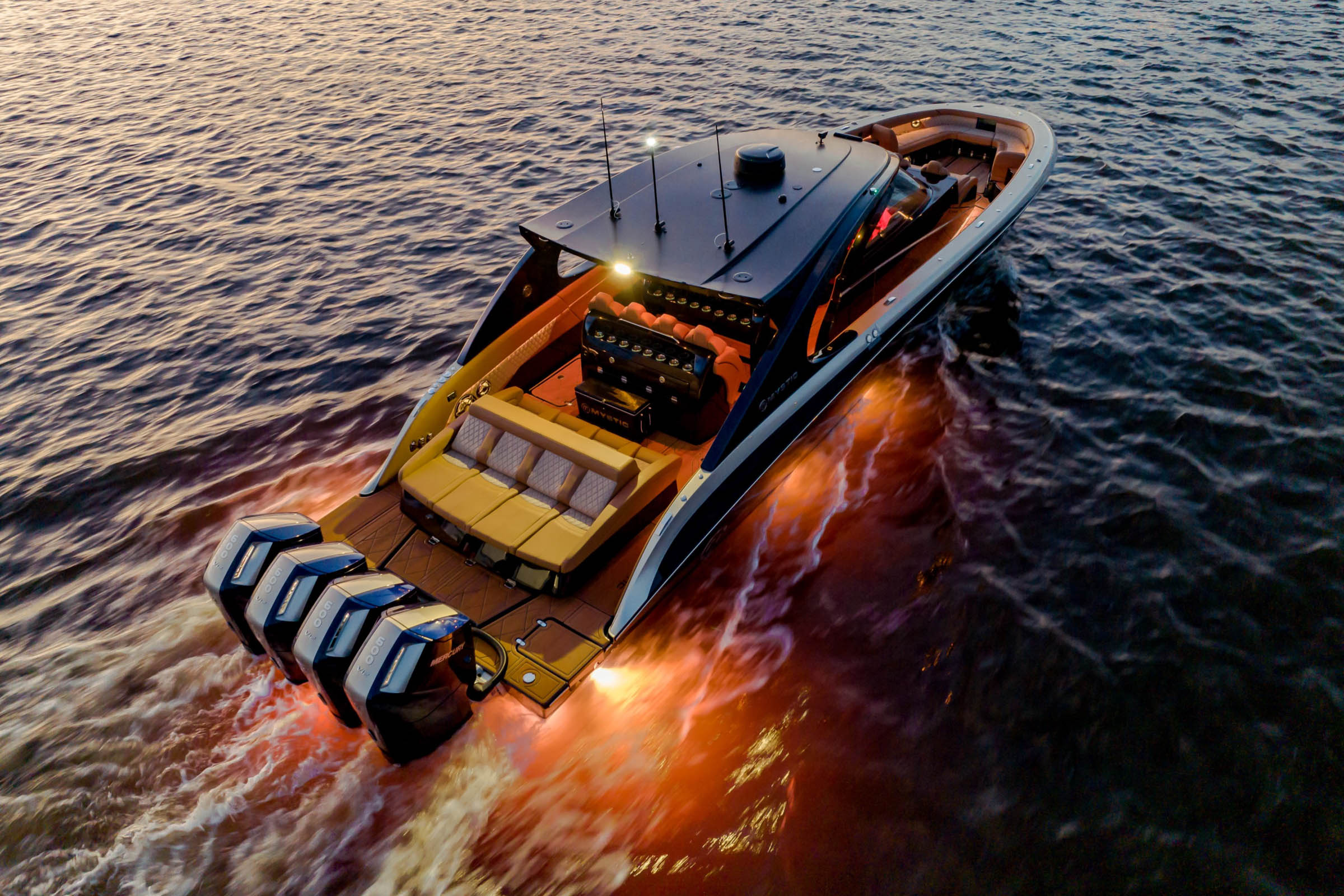