Part One: The Birthing

In Old Norse, Vikings used the name Valhalla to symbolize a place of honor or bliss, while also representing a warrior paradise. Hence, it makes perfect sense to be the descriptor for the striking and salient Viking-built, high-performance luxury center console company, Valhalla Boatworks (VBW). The largest in the series, –  the V-46 – made its world debut at the Viking Yacht Company's VIP Preview in Riviera Beach, Florida, and LCC was fortunate to get a firsthand glimpse.

Undeniably a noble fighter commanding respect throughout the seafaring world, the reverence for the V-46 flagship is so remarkable, 35-plus orders were placed by admirers before hull No. 1 said hello to the water world. Of that total, more than half will head to private owners, two of which will cross a few ponds to their new homes in Turkey and the Seychelles, and those remaining are scheduled for dealer deliveries. Judging from the phenomenal demand, the biggest family member or "next chapter" as its been named, fits in fabulously with its three smaller siblings, the V-33, V-37 and V-41, which already topped triple digit sales numbers since first splashed in 2019.

The VBW success story is not a shocker. Under the guidance of co-founding brothers Bob and Bill Healey since 1964, Viking has evolved into a global leader and iconic benchmark in the international yachting world, praised for its innovative technology, engineering practices, and personalized attention to amenities.

Following Viking's five decades full of accomplishments furnishing the absolute top of the line sportfishing and cruising yachts to anglers and oceanic aficionados, rocket science was not a requirement to foretell the center consoles would be equally well received. What's more rewarding is the latest chapter was conceived from the heart and soul of the third generation of Healey brothers. Justin and Sean, the grandchildren of Bill, are the driving force at the Valhalla  helm overseeing operations and lending support to their dad Pat, Viking's president and CEO.

Seeing the impervious reputation the Healey-family brand upholds, when news of the V-46 broke, the cadre of Viking Yacht devotees were quick to make room for their Valhallas. To be honest, it made me wonder: Do they know something I (or we) don't, to put so much faith and reliance into snapping up a million-dollar-plus product, sight (and center console) unseen? What I discovered was, yes they do, and you will too, thanks in part to the team sharing with us the behind-the-scenes R&D evolution of the V- 46. For this reason, luxurycenterconsoles has expanded the story into two parts first highlighting The Birthing, proceeded by The Unearthing. Enjoy! 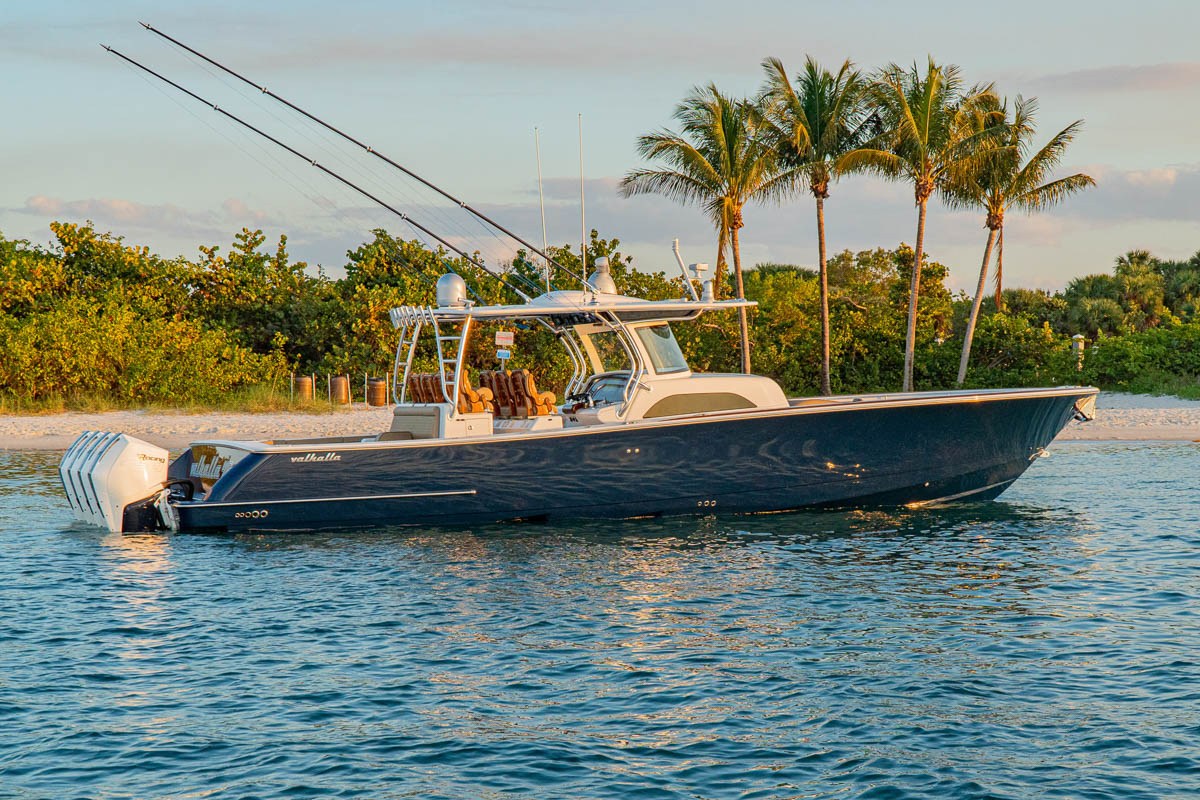 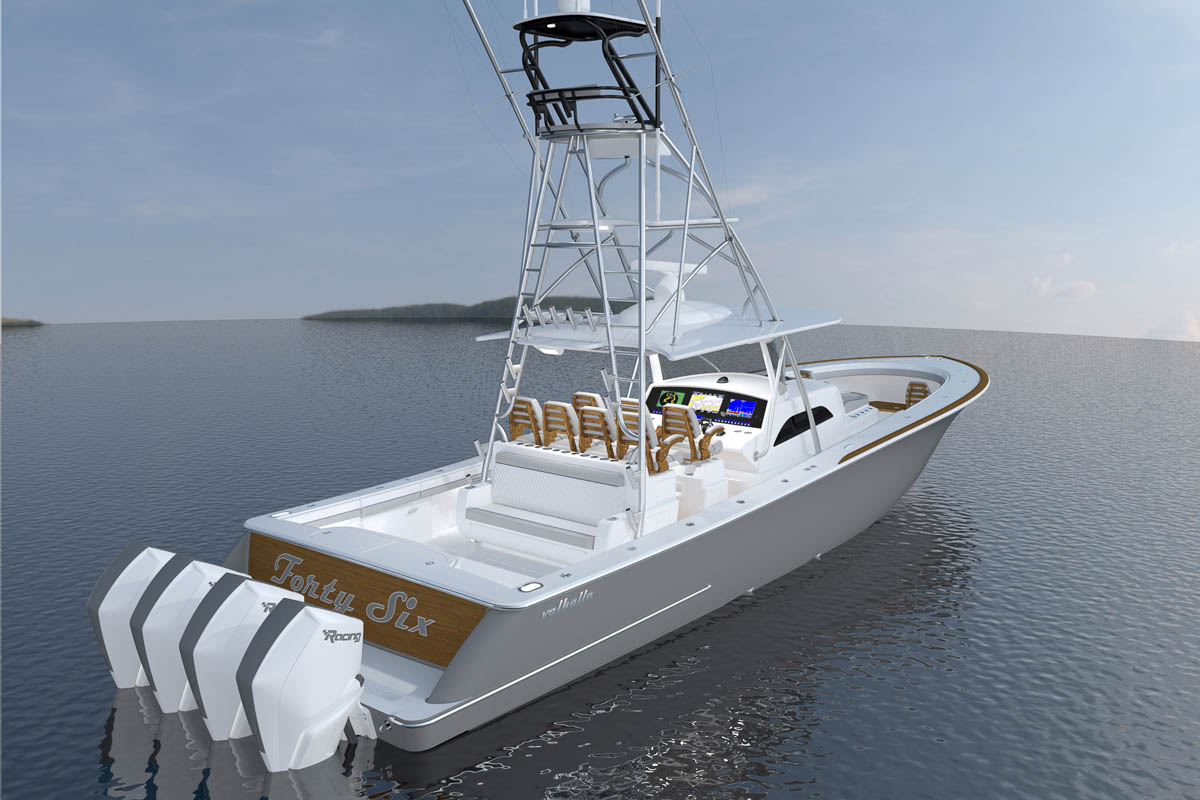 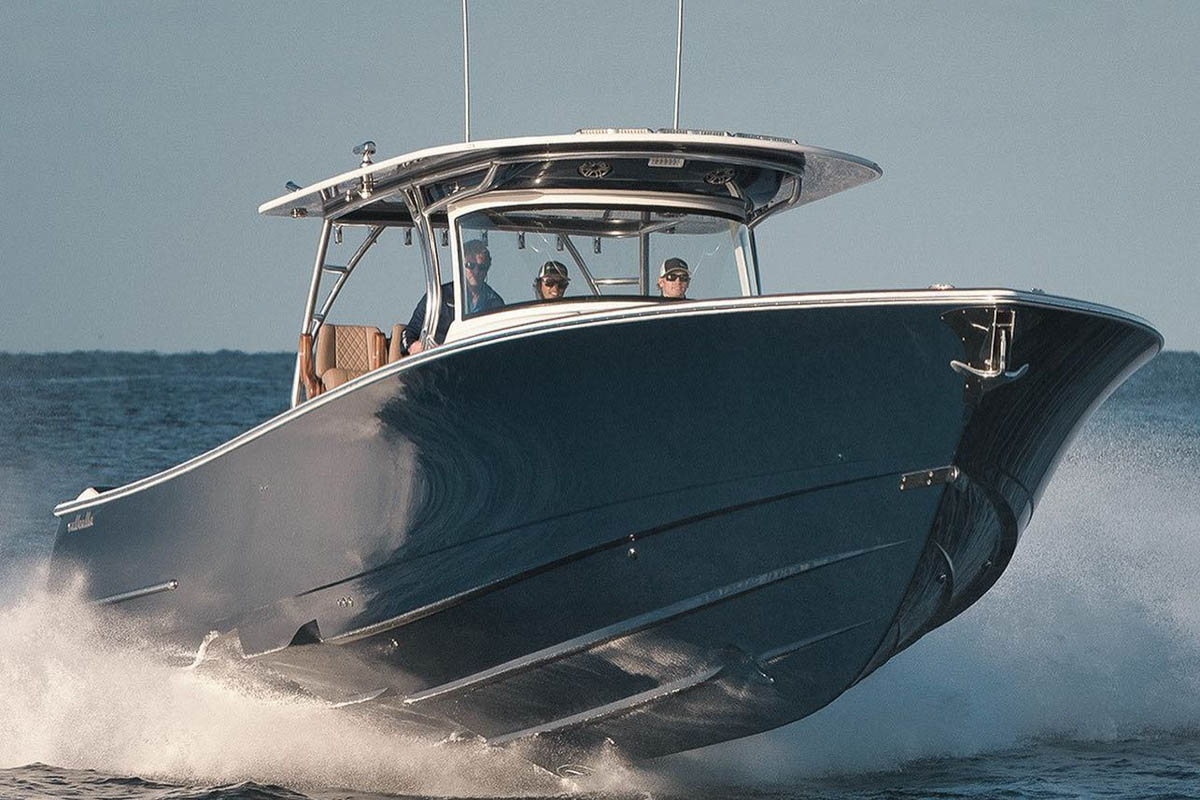 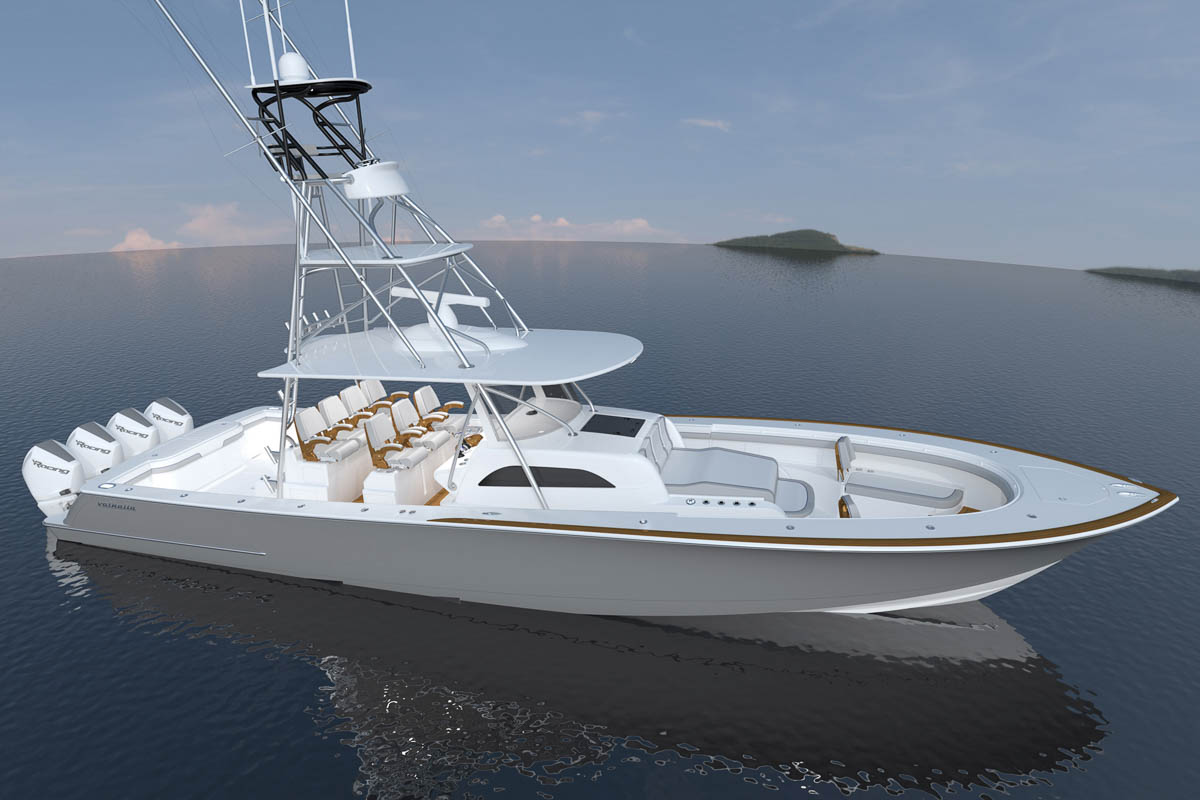 Mention nine months and birth in the same breath and normally a crying infant pops to mind, but for Valhalla it was a 46-foot electrifying wunderkind that sprang to life after months of laborious love and long days and nights from its April immaculate conception at the Mullica and New Gretna facilities in New Jersey, right up to its December delivery reception.

The V-46 bundle of joy offers MORE of everything under the sun available on an upscale fish-friendly center console because that's what the loyal Viking brigade requested... and that's what design manager Dave Wilson and vice president of design and engineering Lonni Rutt delivered. Tasked to go bigger all around with the V-46, miracles were worked into the six inch expansion space making boaters' reveries a reality; enhancements and enchantments will be addressed in The Unearthing. First comes the creation.

The build began back in April under the assistance of Bill Hall, manager of new product development. For the V-46 more than 150-plus molds were developed. To start, block ups were produced from the design models which then lead to the CNC programming of thousands of lines of code fed into the controller to operate the 5-axis CNC machines. Plant engineering manager Chris Babek and R&D supervisor Bob Keller R&D then stepped in when the focus shifted to the overall development of the plugs and molds for production. 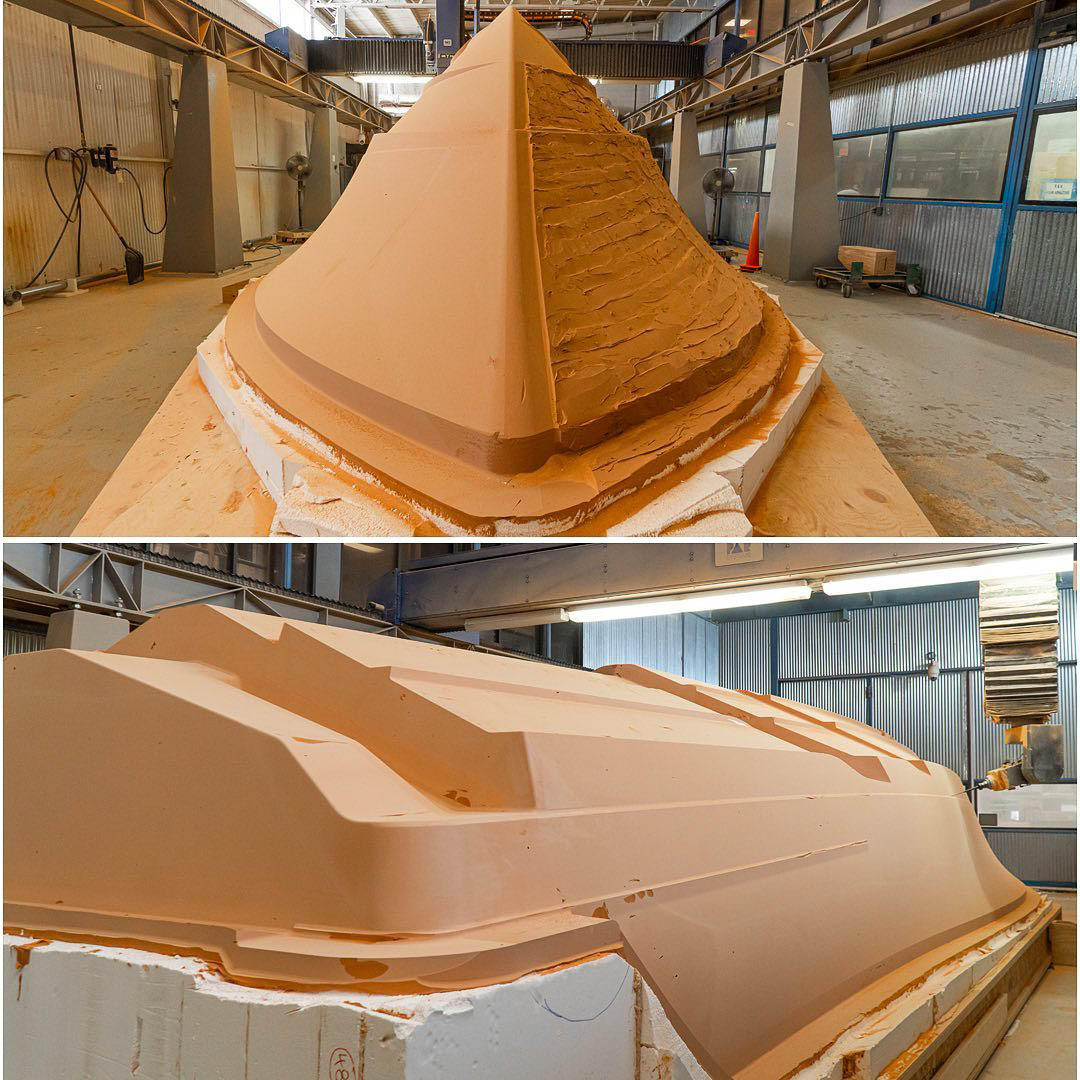 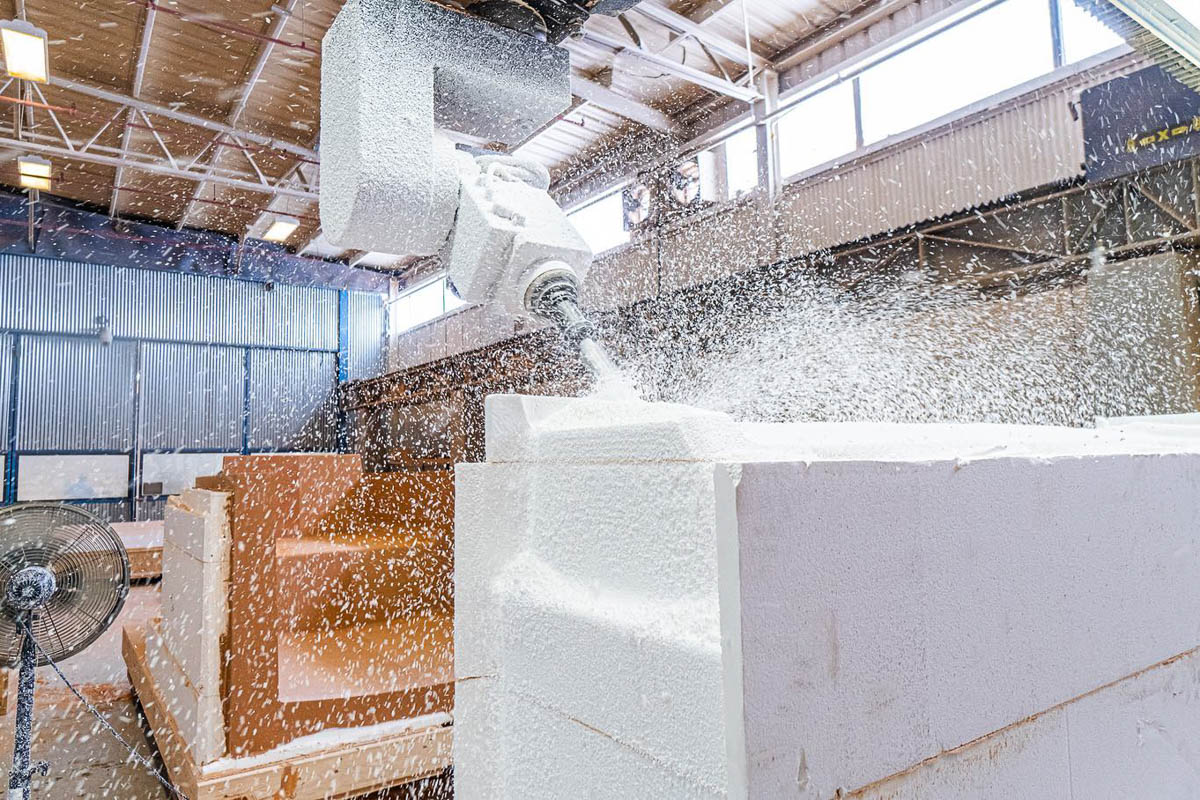 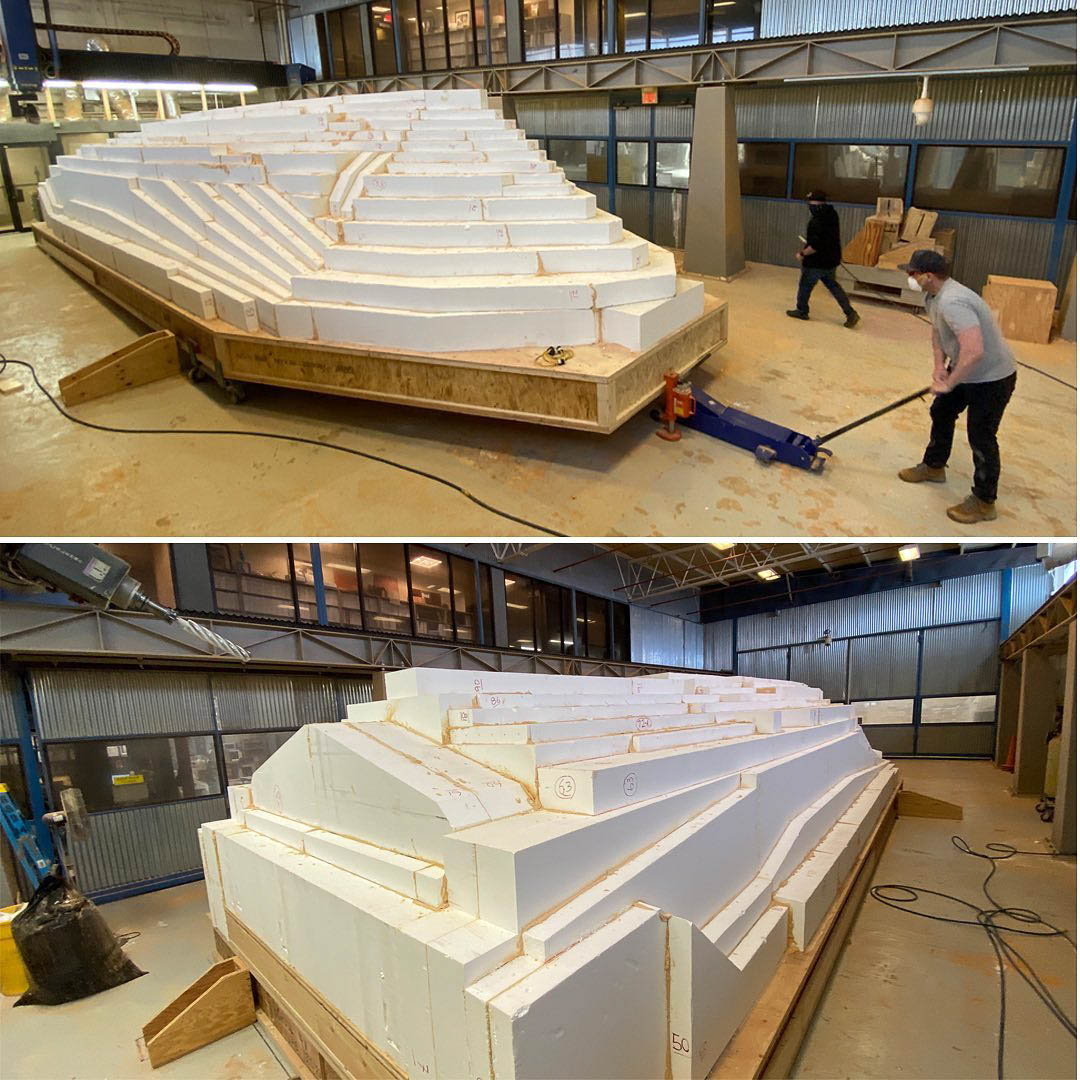 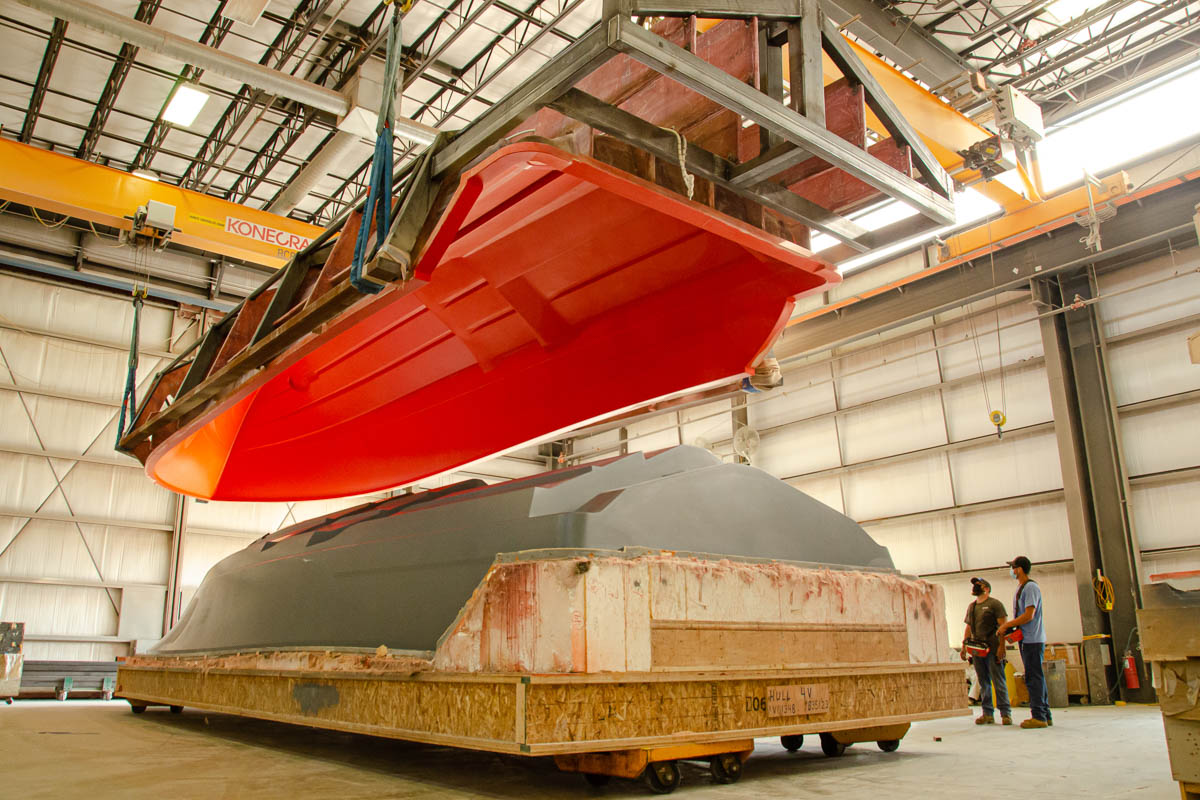 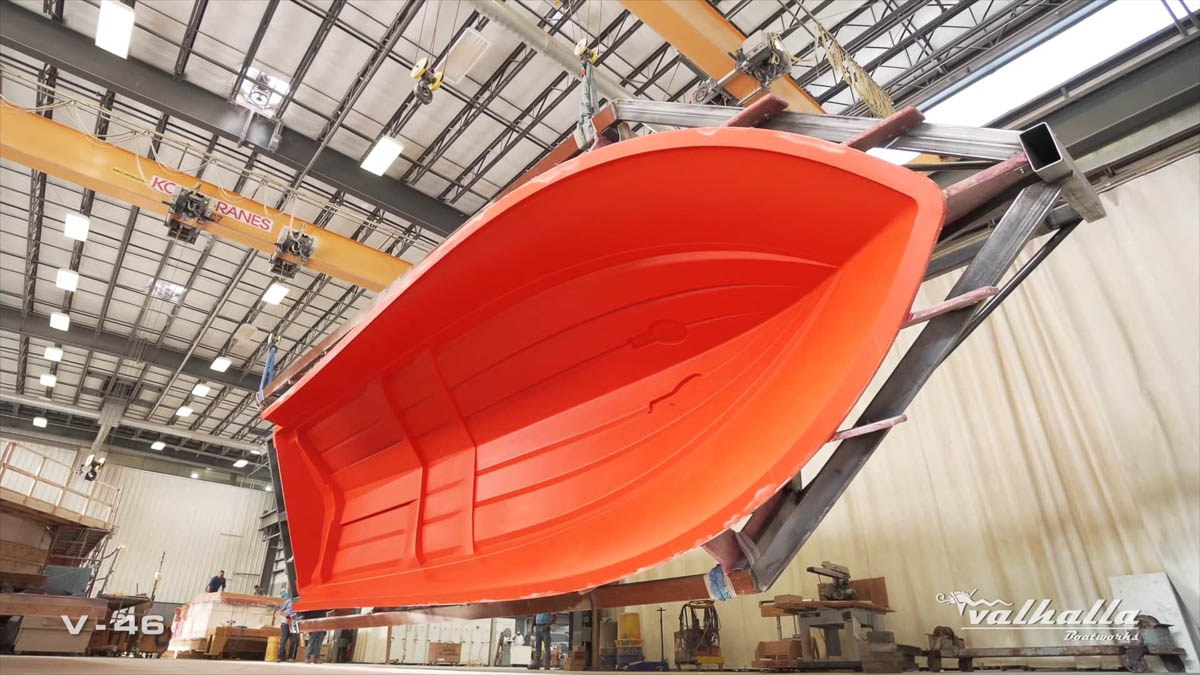 Next in line came the gargantuan 5-axis CNC router which acts as a jumbo robot being programmed to cut shapes over the top of the tools for the molds. The accuracy of the rough cut of the molds is then verified by a 3D scanner before the cured epoxy tooling application covers the foam structure for the final cut using the larger PaR machine. In the past, building was limited to what a carpenter could physically produce and carve out, but nowadays everything can be physically cut to spec with perfection from the million-dollar machinery, which at the same time facilitates developing new models faster and with more organic shapes. It should also be noted how highly specialized each step is to insure the integrity of the surface which is a most critical element.

Moving into May, the moment had come for the rough cut of the structural stringer grid's foam plug. And by June, the hull mold used to build the boat, was lifted from the finished plug. Meanwhile, as all the big pieces were coming together so were the not so big ones, only all this action was happening on a second CNC machine. The smaller DMS router, as it's titled, was responsible for knocking out the smaller stuff including: boxes, doors, hatches and lids.

Come midsummer, it was now July when all hands were summoned on deck for the 30-minute resin infusion process of the structural stringer grid. Having a clear idea as to why the structural stringer grid is significant helps to understand the importance of this stage.  Stringers are defined as the lengthwise fore to aft beams fixed to the inside surfaces of the frame, and they serve two purposes: to support the bottom, and second, to give longitudinal rigidity to the hull. The grids on current day modern vessels are comprised of pre-fabricated fiberglass molds, whereas wooden timbers were typical on the older jobs. 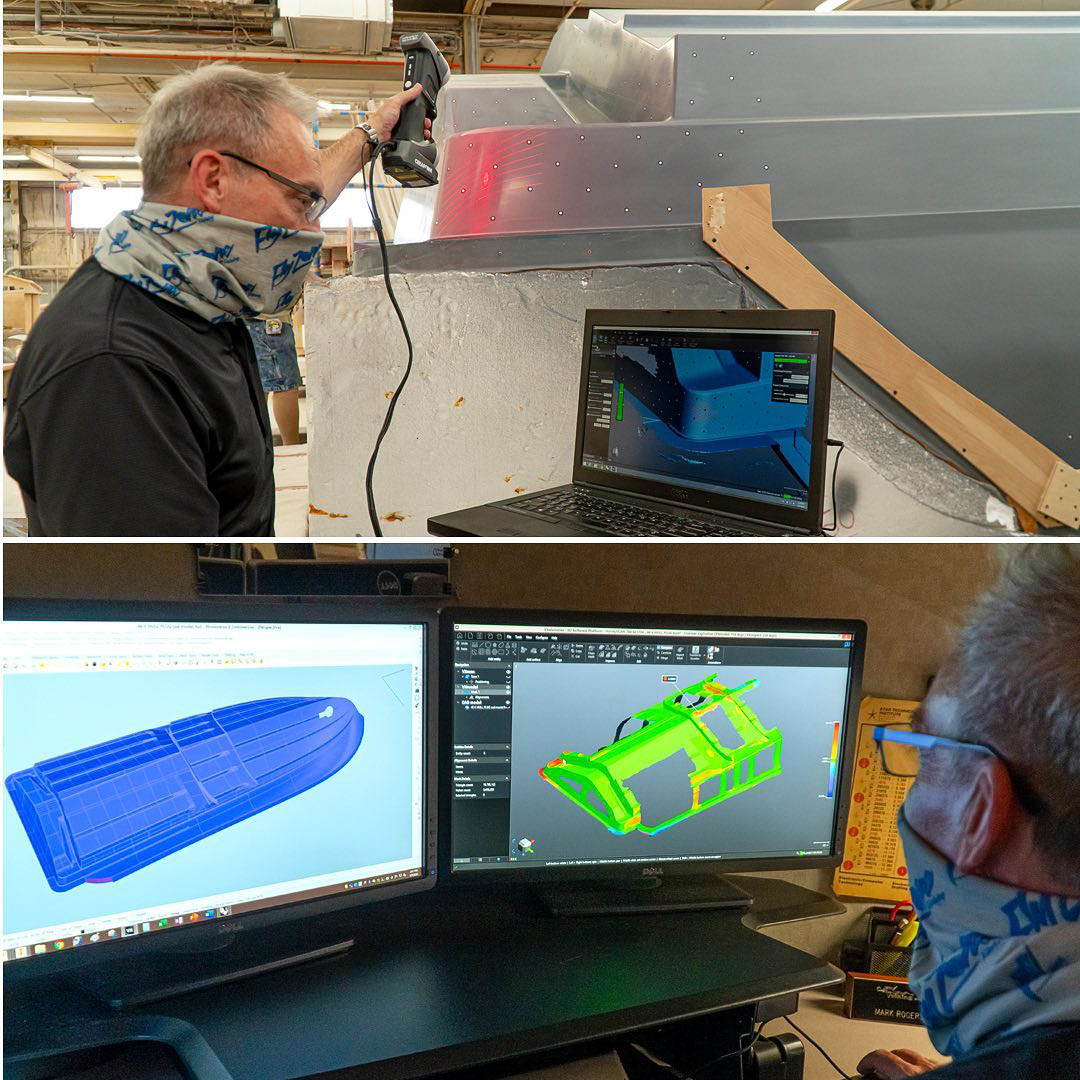 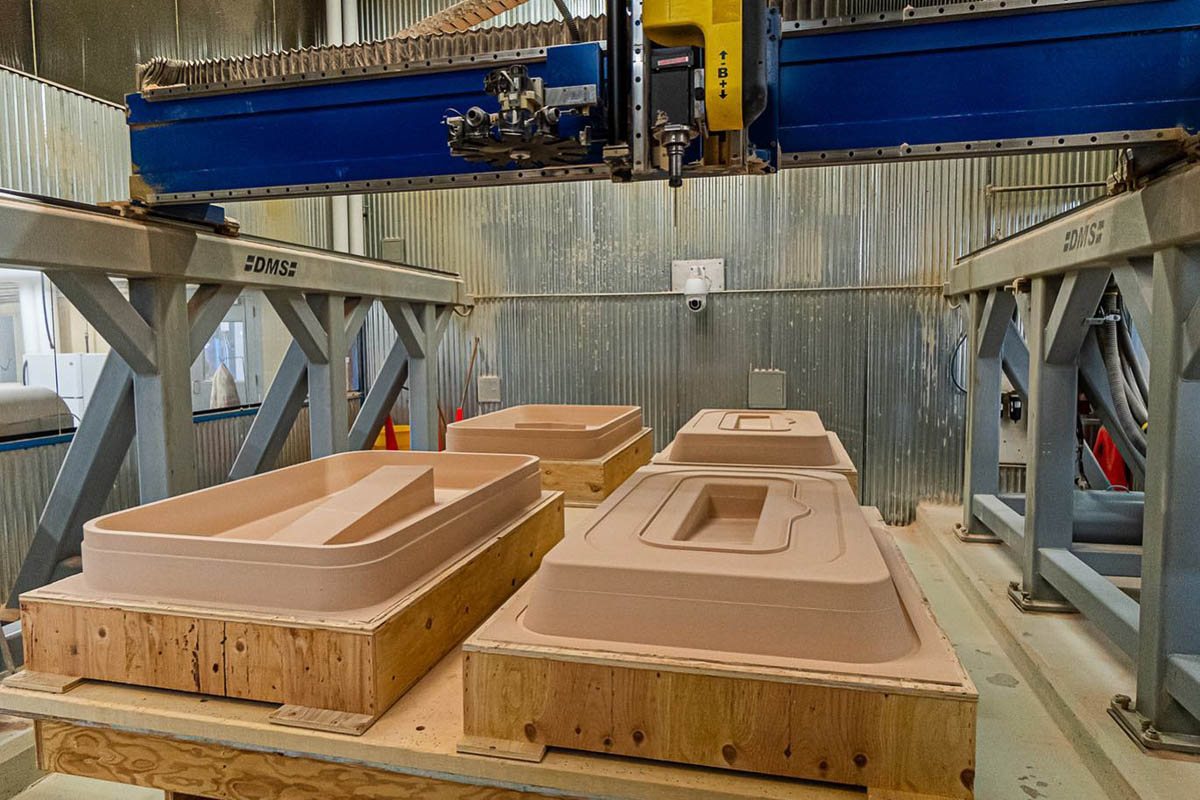 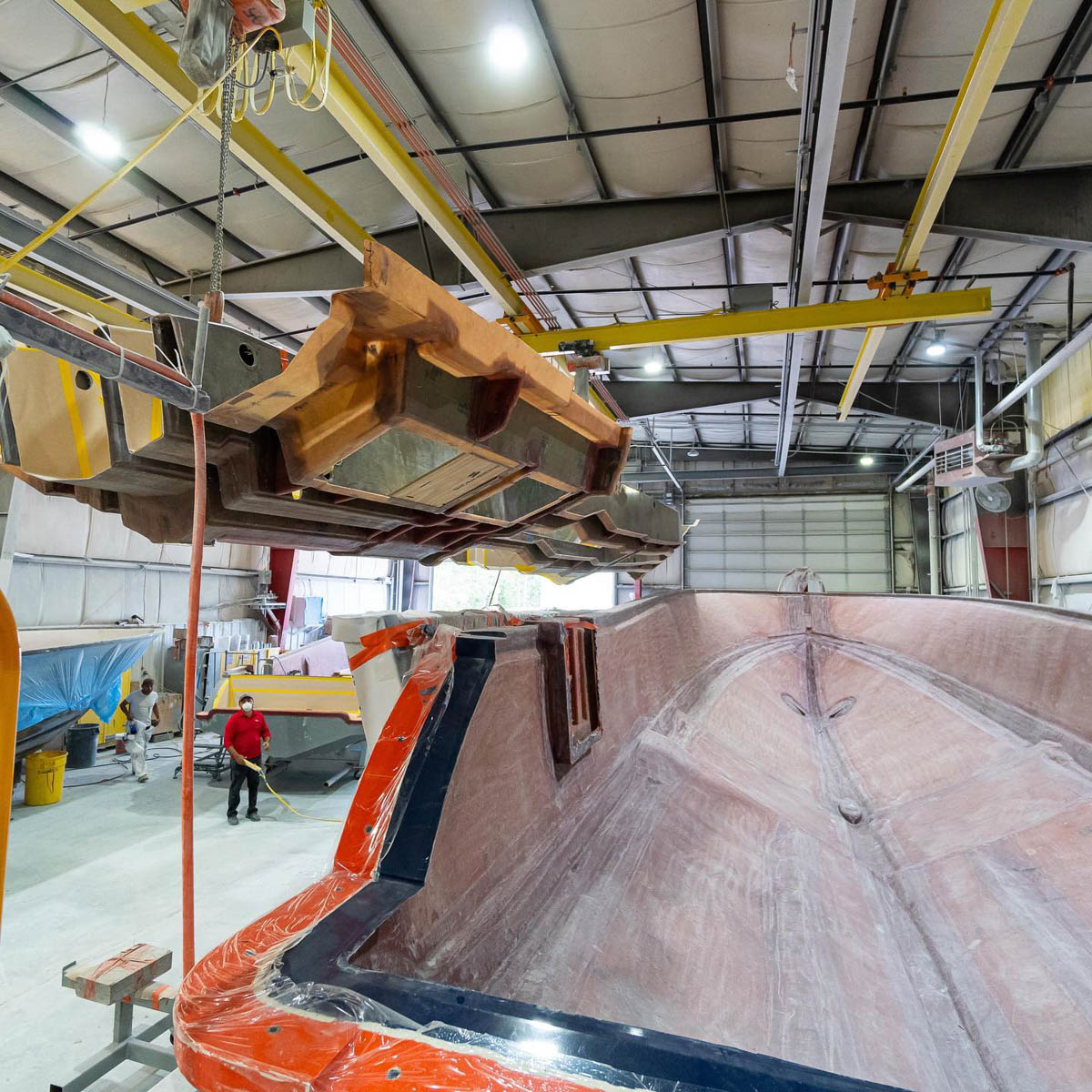 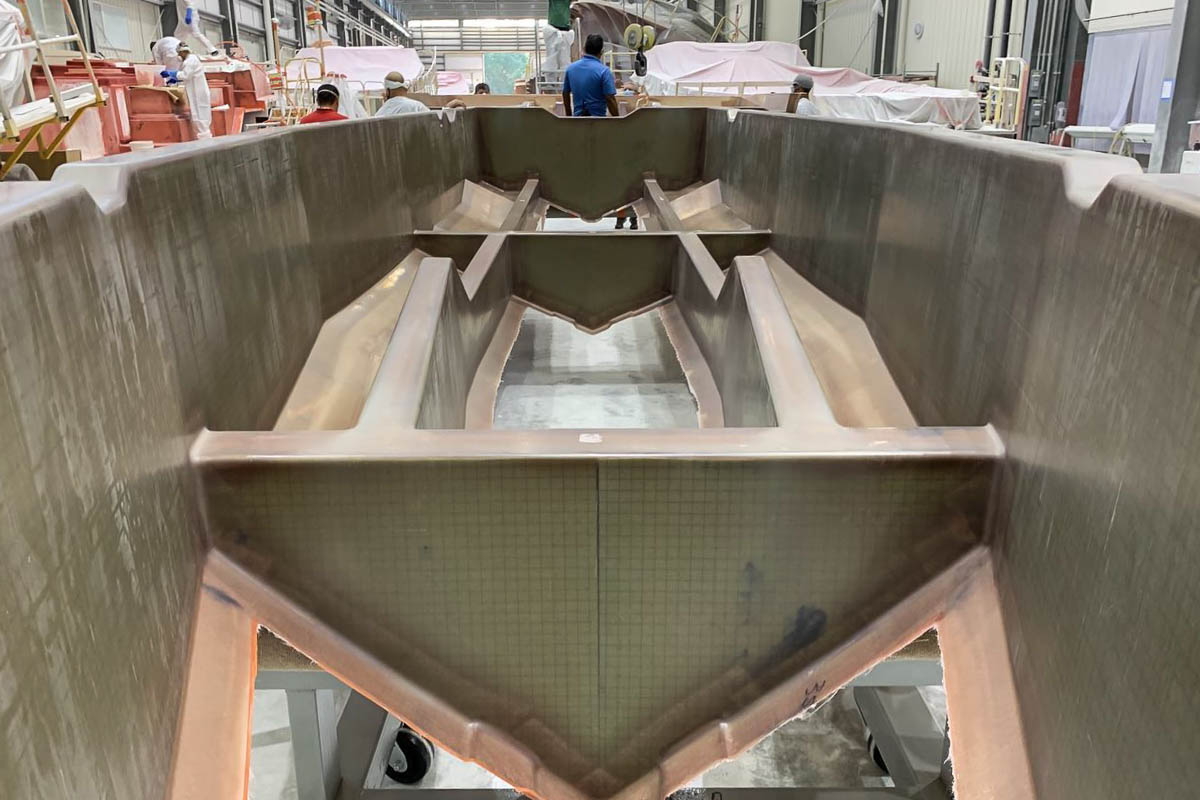 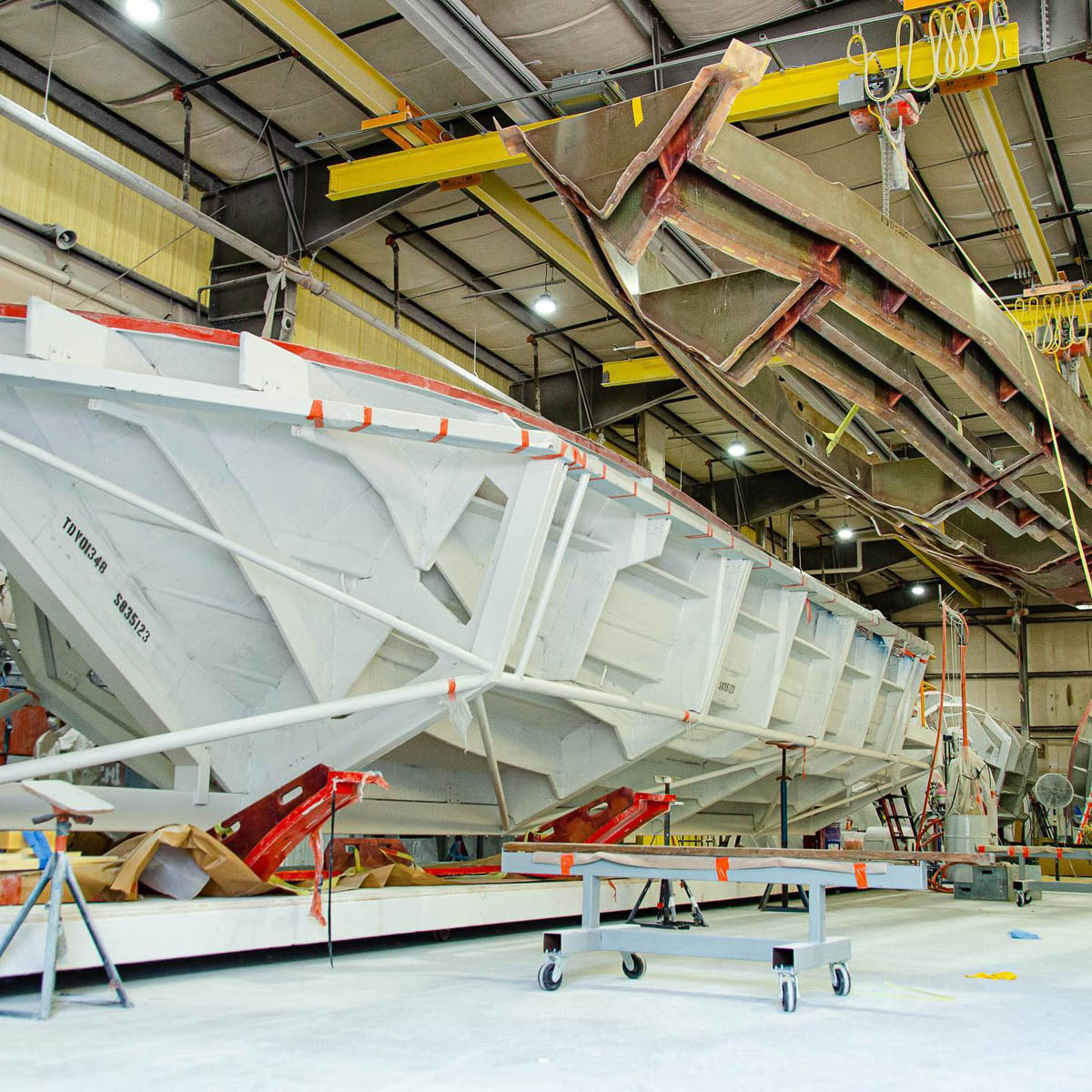 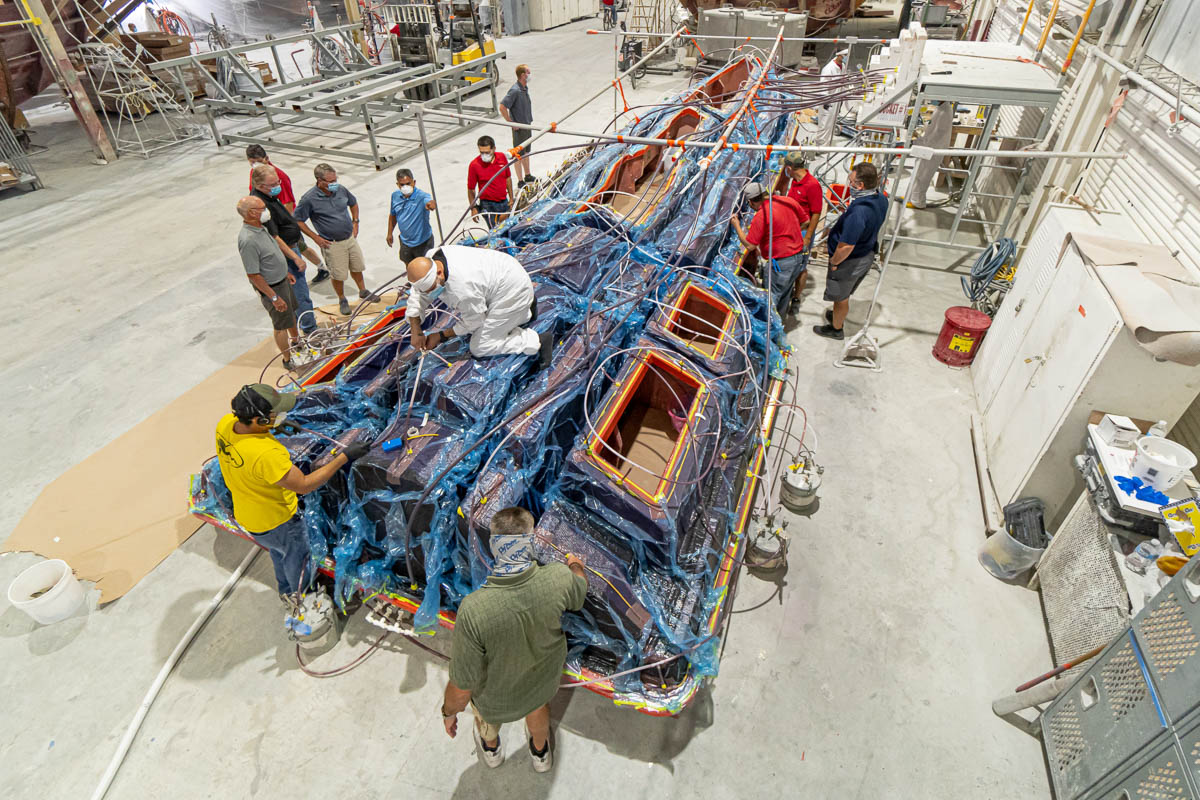 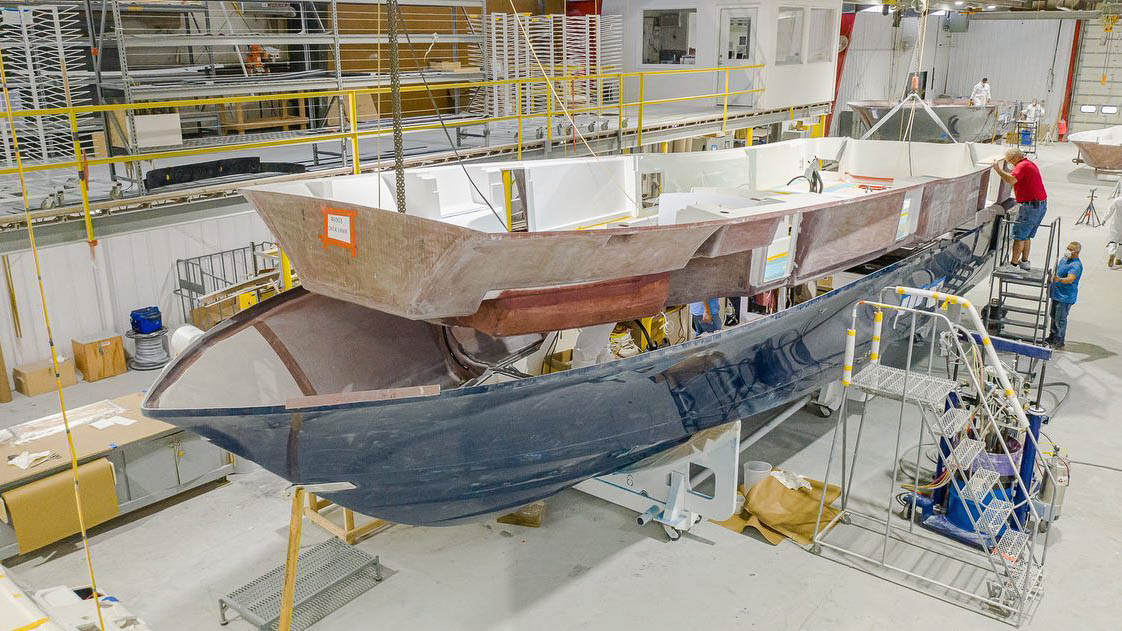 The function of the grid was summarized best on the Galati Yacht Sales website by Marina Galati Hill, "Valhalla utilizes a structural grid as an independent component for a more effective overall manufacturing operation. The structural stringer grids play a big part in the smooth and solid ride. This building method also allows for gelcoat-finished interior sections and enables the installation of chases for wires and hoses. Using a calculated fiberglass-to-resin ratio, the structural stringer grid minimizes weight while bringing stiffness and strength to the center console. The engineered composite of fiberglass fabrics and coring is infused with vinylester resin using a vacuum."

With the stringer grid infusion complete, as the calendar flipped to the hazy dog days of August, the final cut was made of the transom bustle plug, and excitedly by September, Hull No. 1 was pulled from the mold and placed in the custom hydraulic turning rig for the next phase. The final stretch from October onwards went as such... the deck liner and integrated hatch openings were installed; the coaming including rod holders and transom livewells was lowered into position; the console was put in; and the machinery room and cabin came to fruition.

Nearing the end, seating modules, the windshield and the hardtop all had their moment under the shop lights in the spotlight. And then it finally happened, the joyous month of December arrived and while holiday carolers across the country were singing "Here Comes Santa Claus," Valhalla Boatworkers were rejoicing to another tune – "Here Comes the Valhalla V-46." 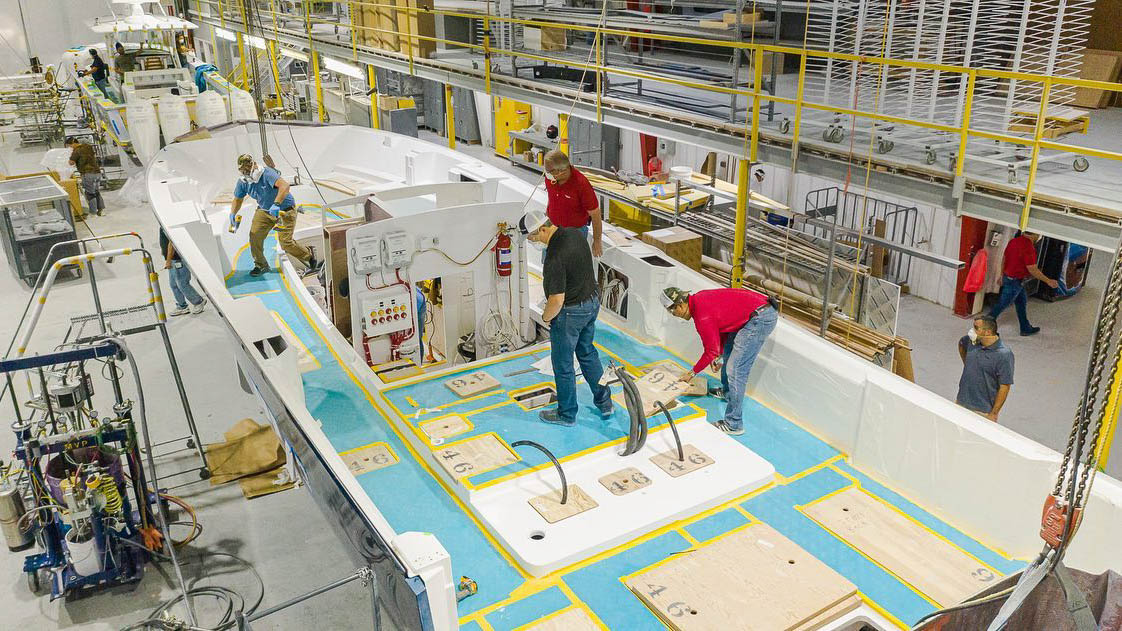 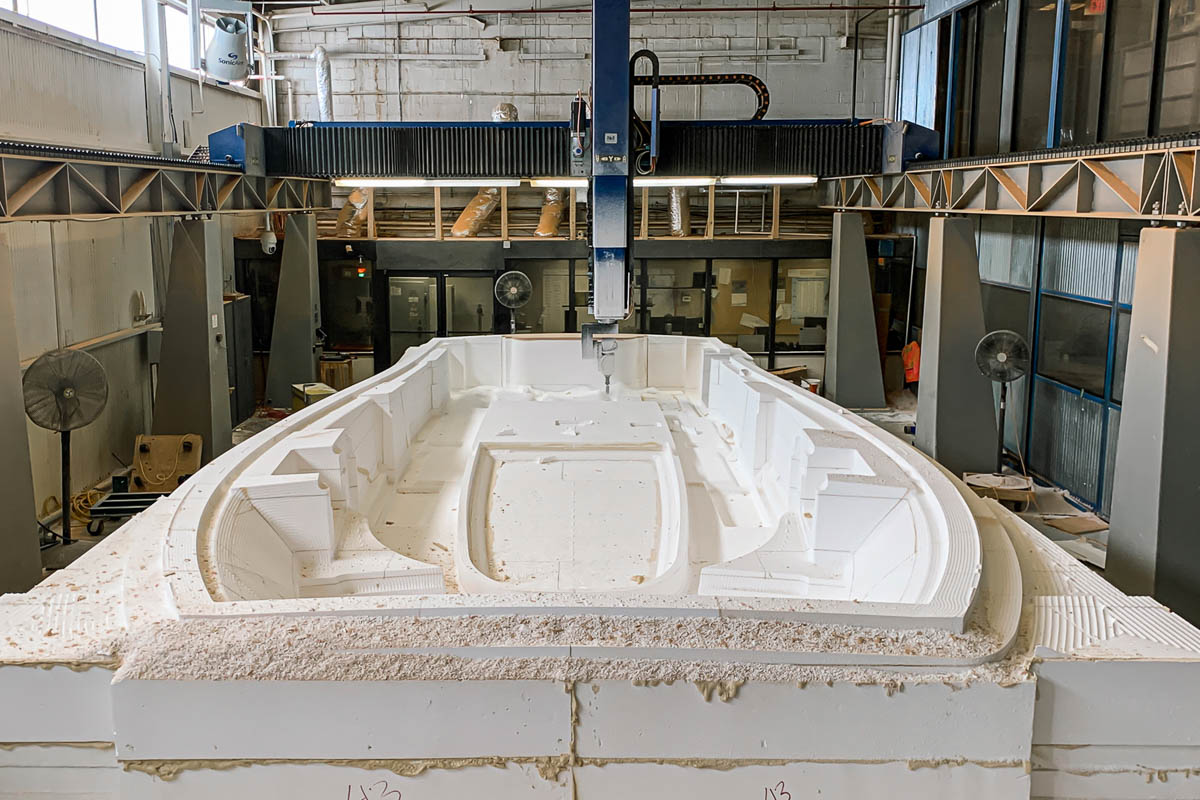 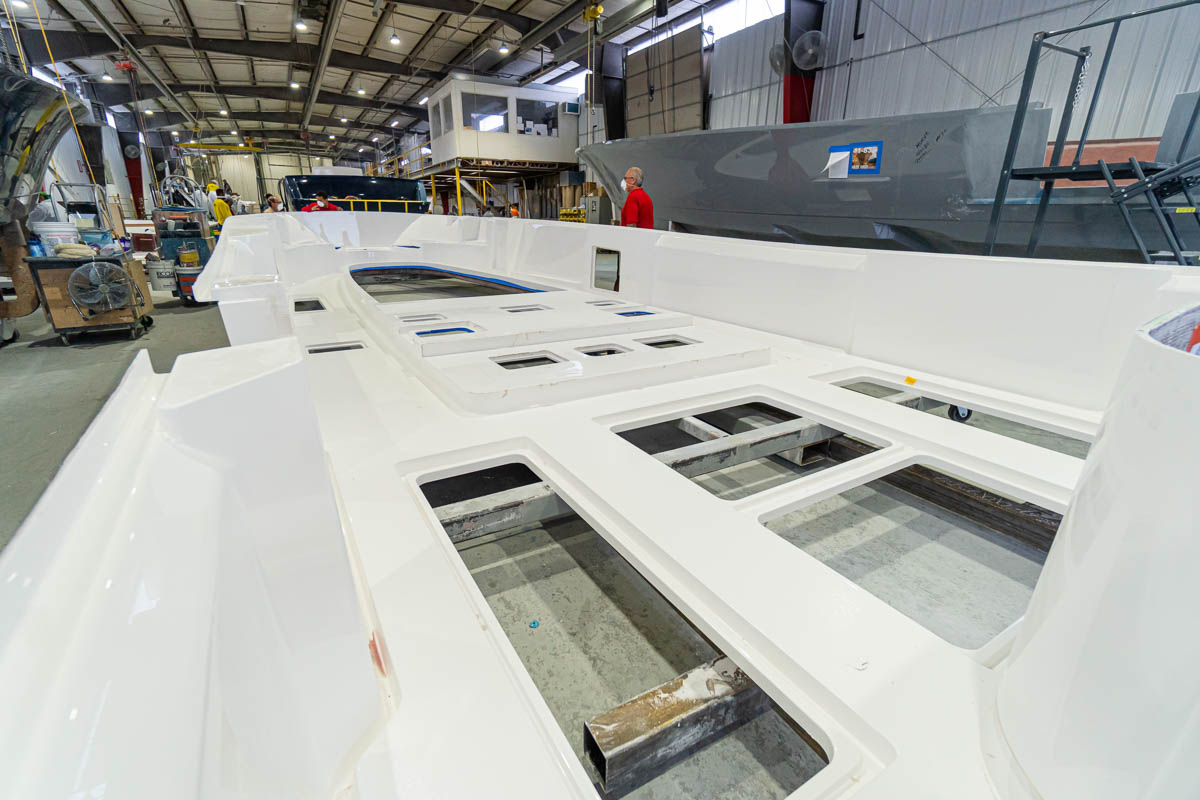 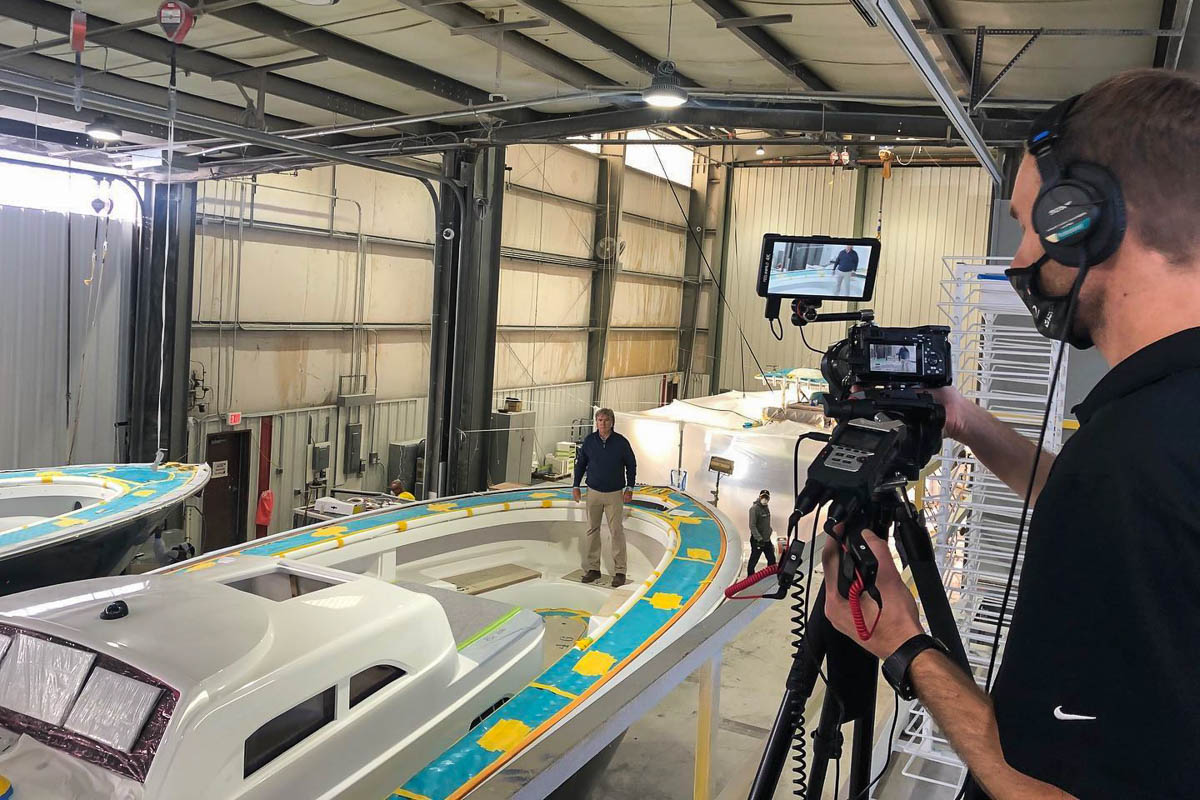 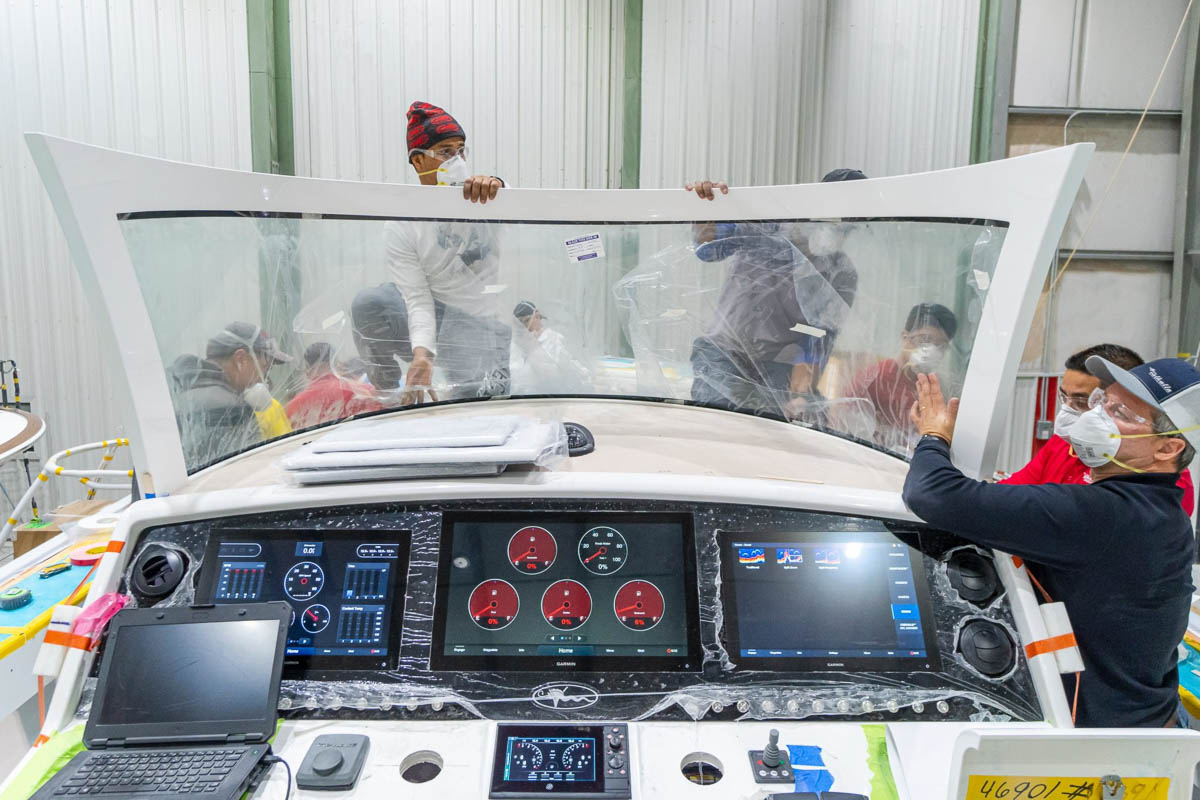 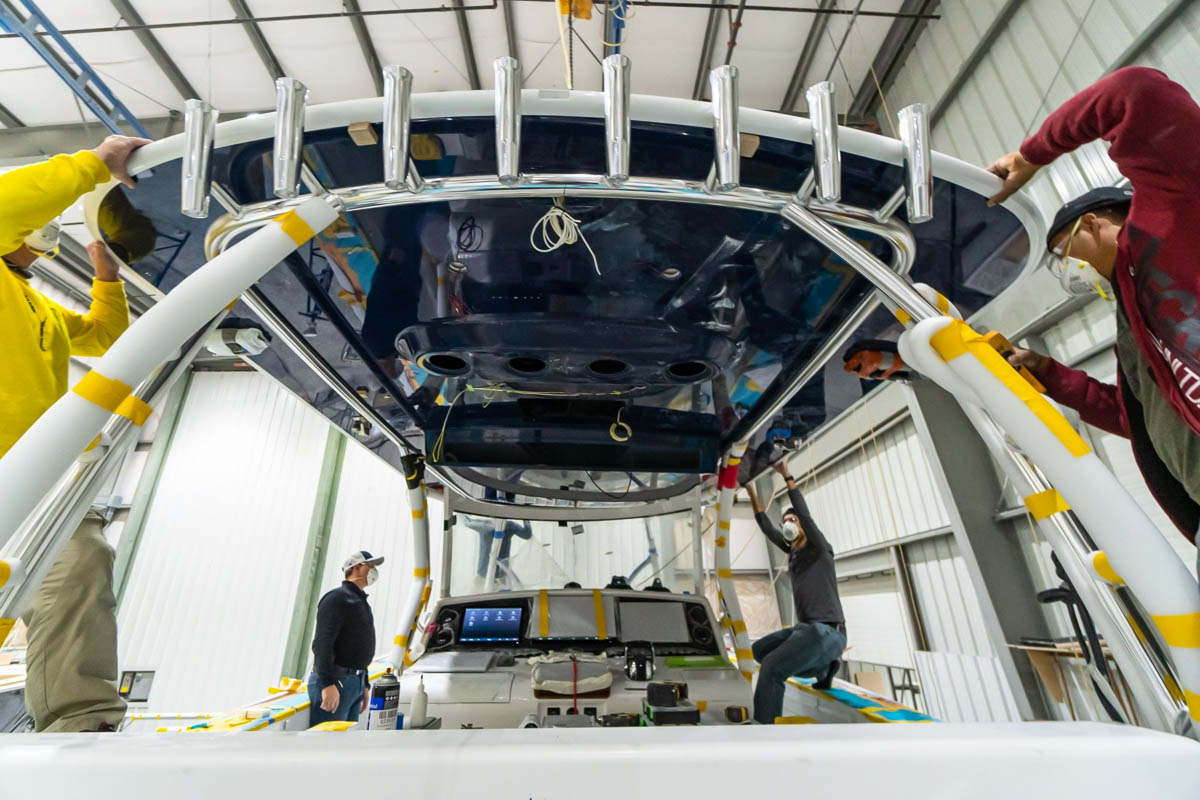