Story and Photos by DinaRella

Fortunately, Allan "Brownie" Brown hasn't permanently traded in his toolbox for a table in Starbucks to pen the sequel to his grand slam debut hardback -- Tales from Thunderboat Row. And even better, he answered "yes" and required minimal persuading when an old-time racing fan contacted him in 2017 to work as a contributor in designing, building and fitting a special one-of-a-kind Doug Wright 48-foot V-bottom.

Yes, you read it right, I said V-bottom. It is the first-ever mono-hull from the Melbourne, Florida-based company, famous for its collection of CNC-tooled catamarans which count for more than a few of the Super Stock convoys' amassed accolades within the varied racing organizations.

I was granted exclusive access to the marine shop Nova Boats where the beast is currently being rigged for a rare inside sneak-peek. On my rainy ride out past the Opa Locka airport in North Miami, I didn't know what to expect after listening to  Brownie's "pre" viewing manifestations concerning the arduous and monumental build.. and the little known fact that the exterior is... uhmm... absent of all screws from bow to stern, by the owner's choice.

After climbing all over it and getting schooled on fabricating parts to 3/16th standards thanks to my mini-lesson from Nova Marine owner Jose Abella, all I can say is this aquatic antelope will own the ocean when it finally sees the seas. It reminds me of Al Copeland's 56-footer, turbine-powered Phenomenon, revealed to the crowds during the Key West World Championship back in 2010.

The head-turning machine's genetic makeup tests positive for a wide range of offshore DNA. To begin, it has a contemporary twin-step bottom, paired with old school traits such as the semi canopy and double bolsters. It Is also slated to have a third spot for a passenger in the middle that apparently the steps to the cabin will deploy into. While the craft has been compared to a runabout, cruiser, Dragon and Cougar, the true parental framework may never be confirmed due to the fact, it is exactly like nothing else. 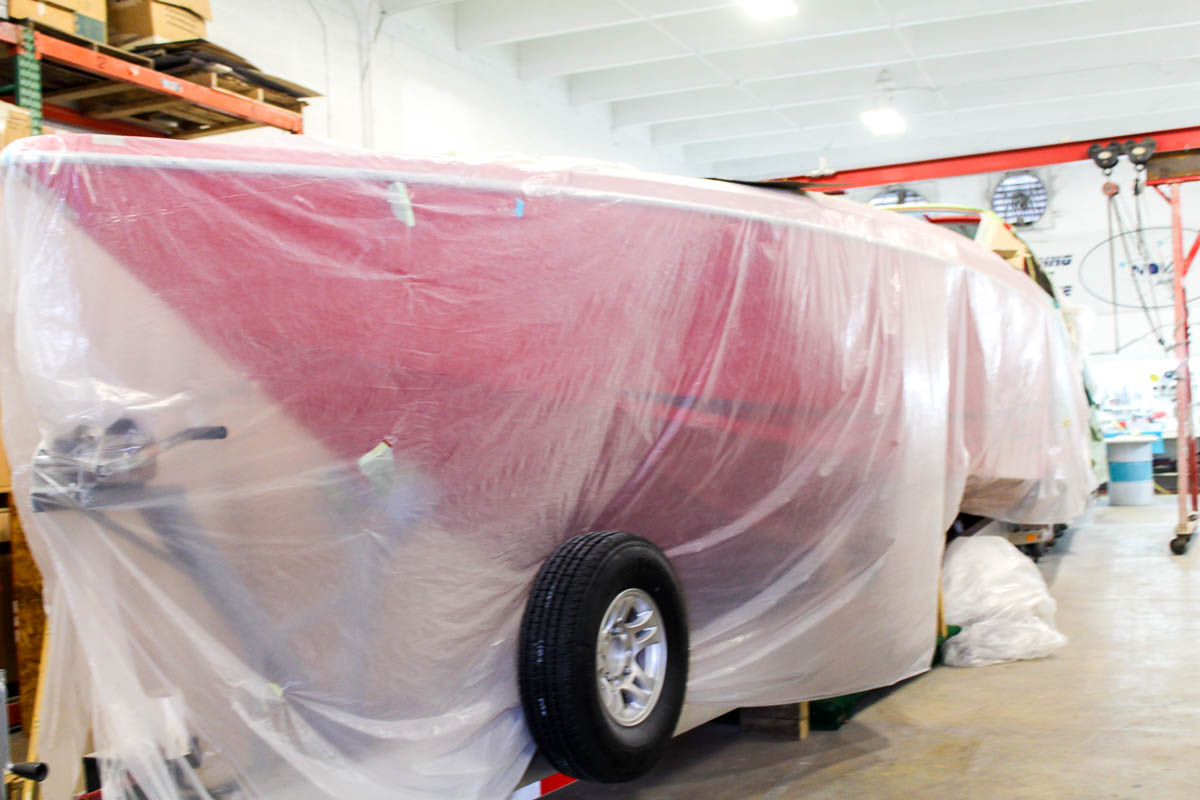 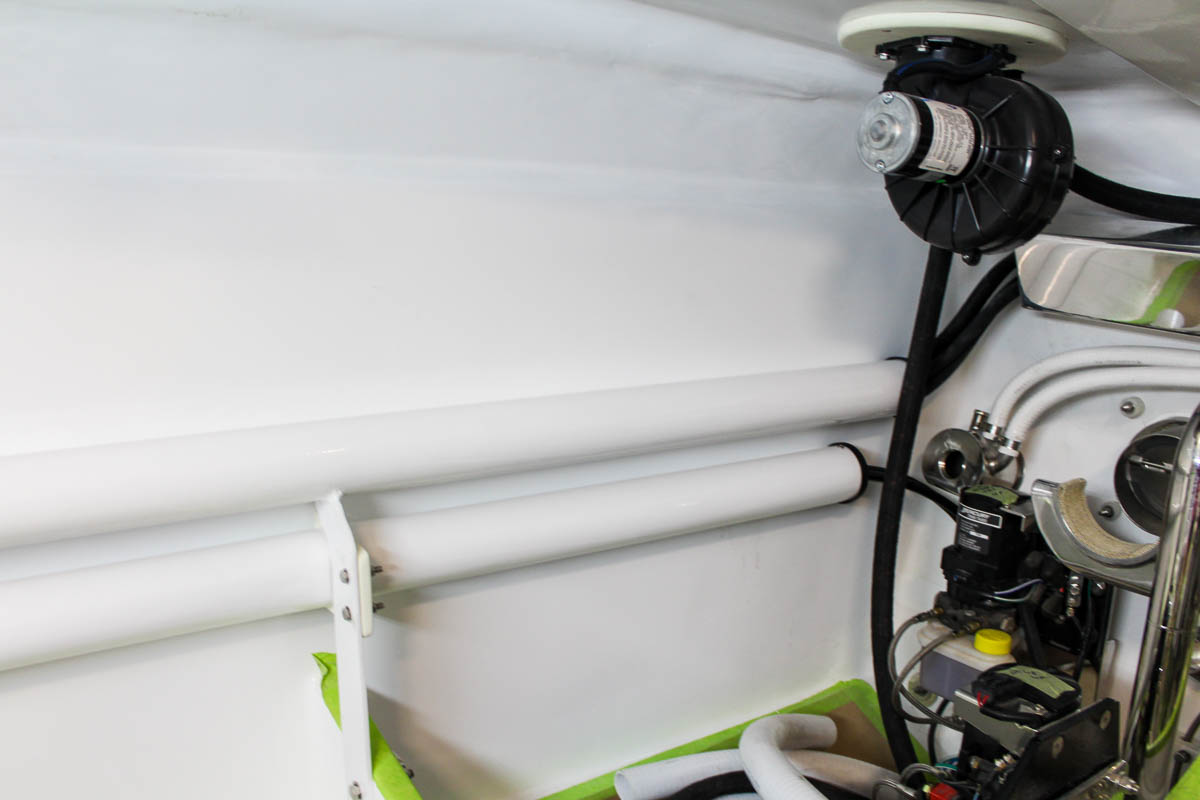 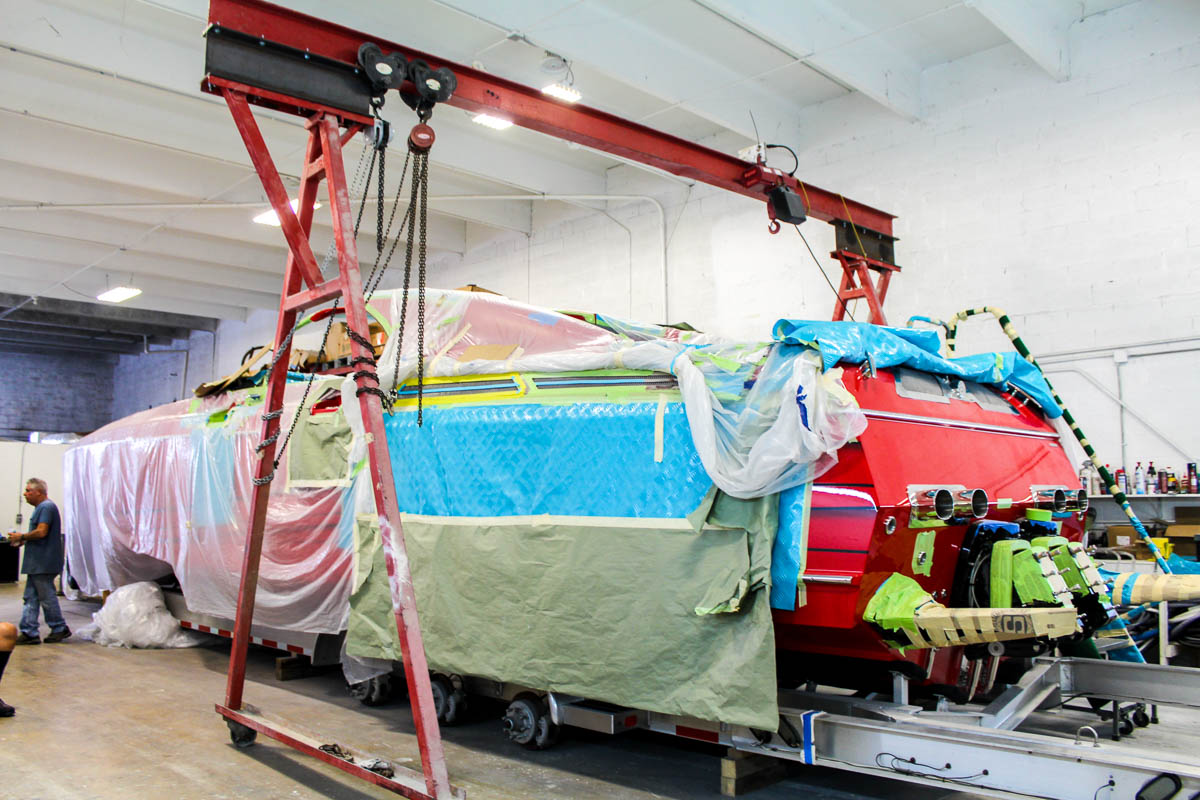 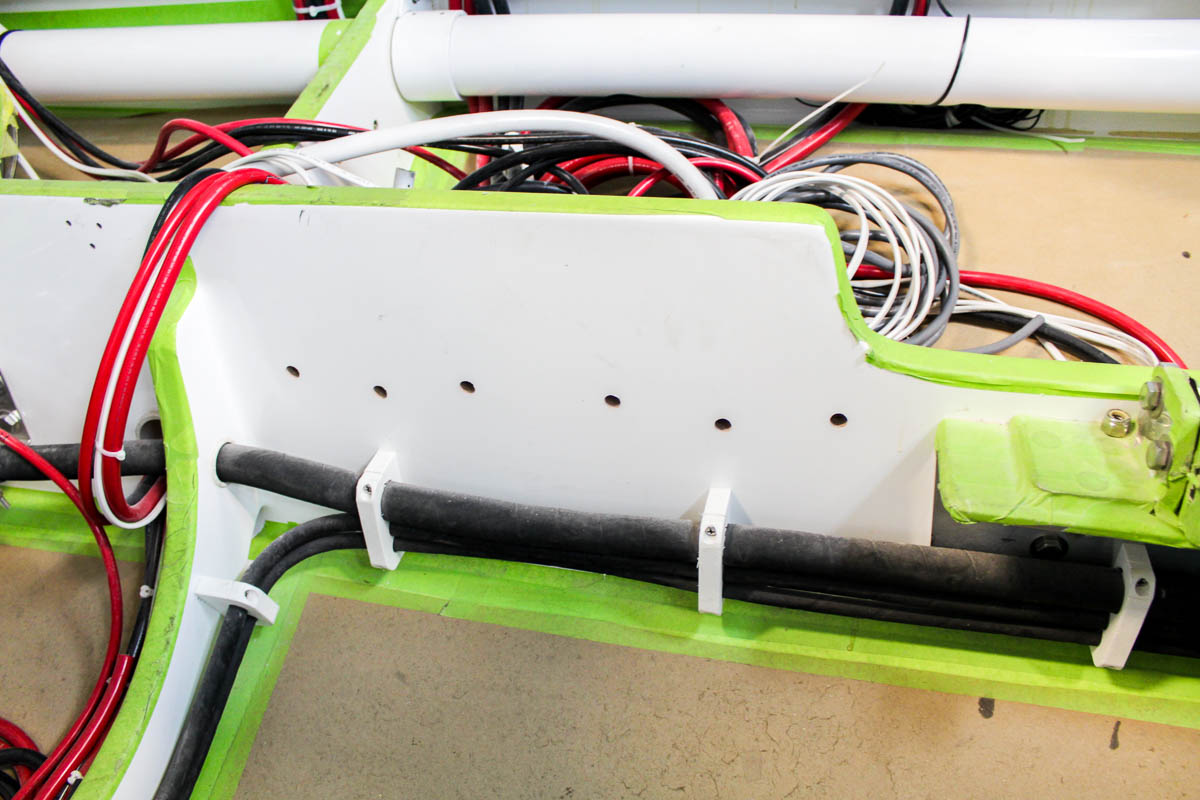 The powerplant plan according to Brownie is for a pair of 1100 horsepower Mercury Racing engines to be installed at TNT Marine, and bets are being waged for a full throttle performance between 112 to 116 mph. The owner who splits his time between the East Coast and the suburban heartland mentioned going with the dual calibration Mercury Racing 1550/1350 stern drives after Brownie had taken him to the Cigarette Racing Team factory headquarters to check out some goodies. That banter lasted all of five minutes. With a smile on his face, Brownie shot down the proposal with an affirmative no.

My tour which kicked off in the engine compartment lasted an eternity because there was that much to try and fathom. The wires.. what wires? When all is said and done you won't be able to find them because no matter the size, they are all protected inside specially crafted tubes to prevent exposure to heat and fumes. And better yet, since all components have been sealed and then resealed from scratch, no fumes have ever, nor will ever travel forward into the cabin.

To address the weight of the exhaust from the engines that projects through two rear outlets and needs to be supported, Nova Boats made a special telescopic heat shield system. The mechanism can be fully adjusted to the contact in order to prevent breaking, whereas typically builders will make a solid piece and leave it at that. 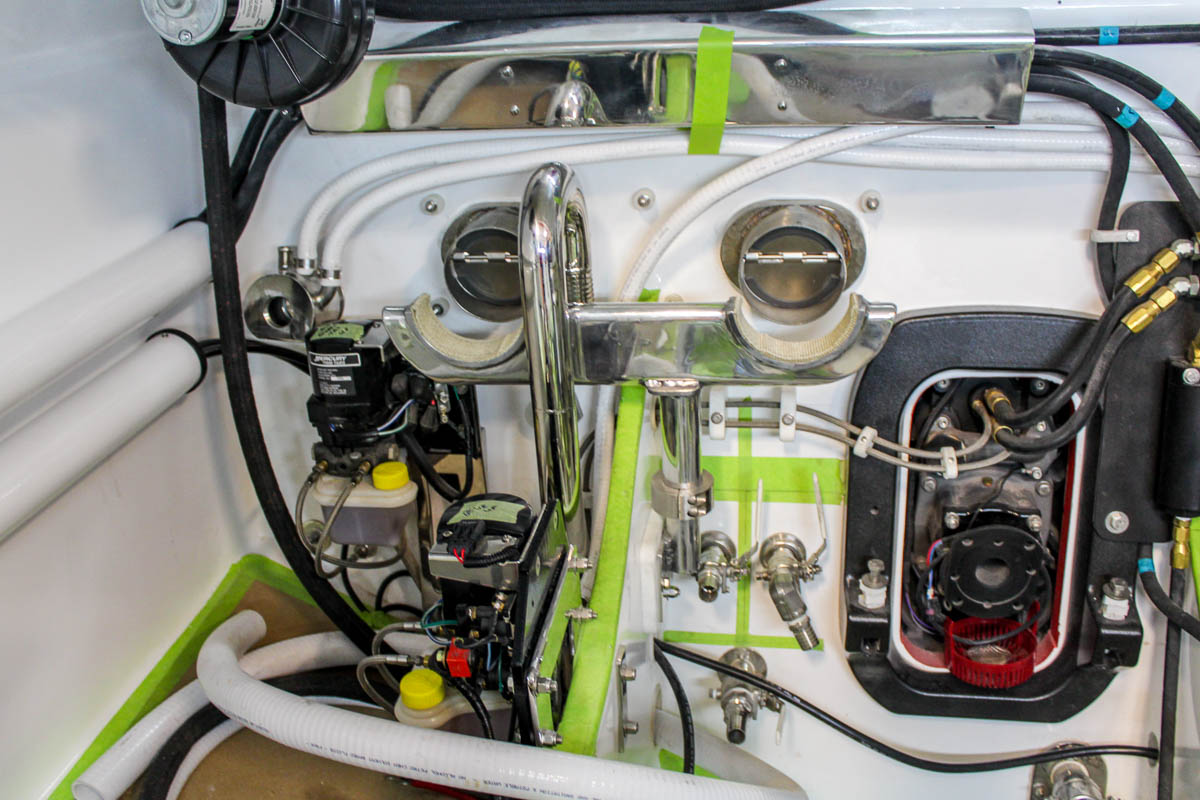 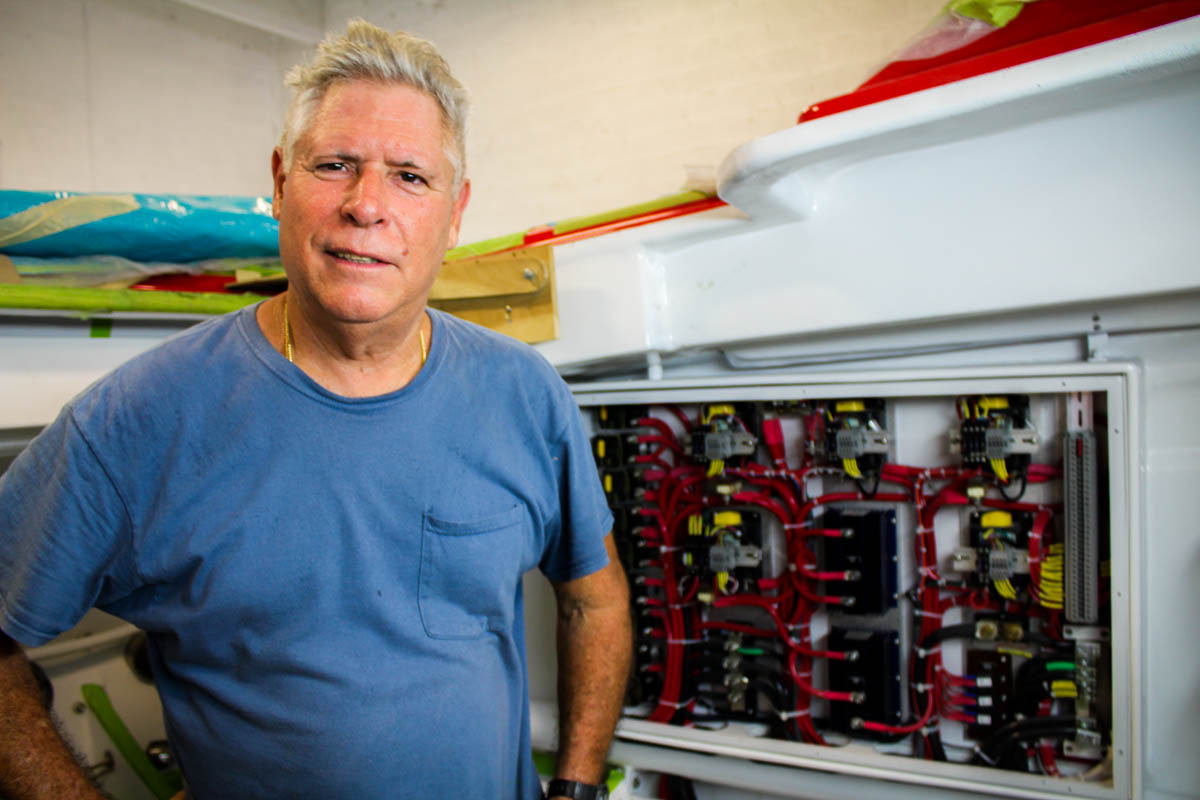 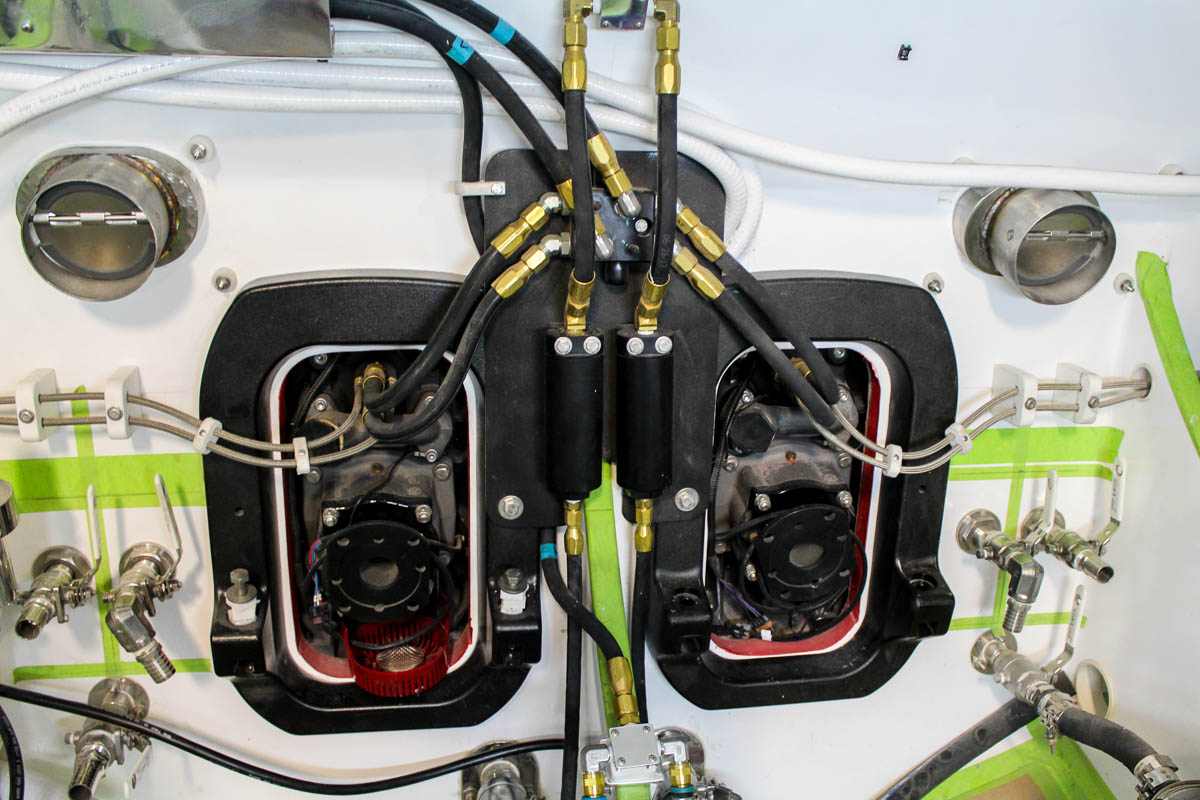 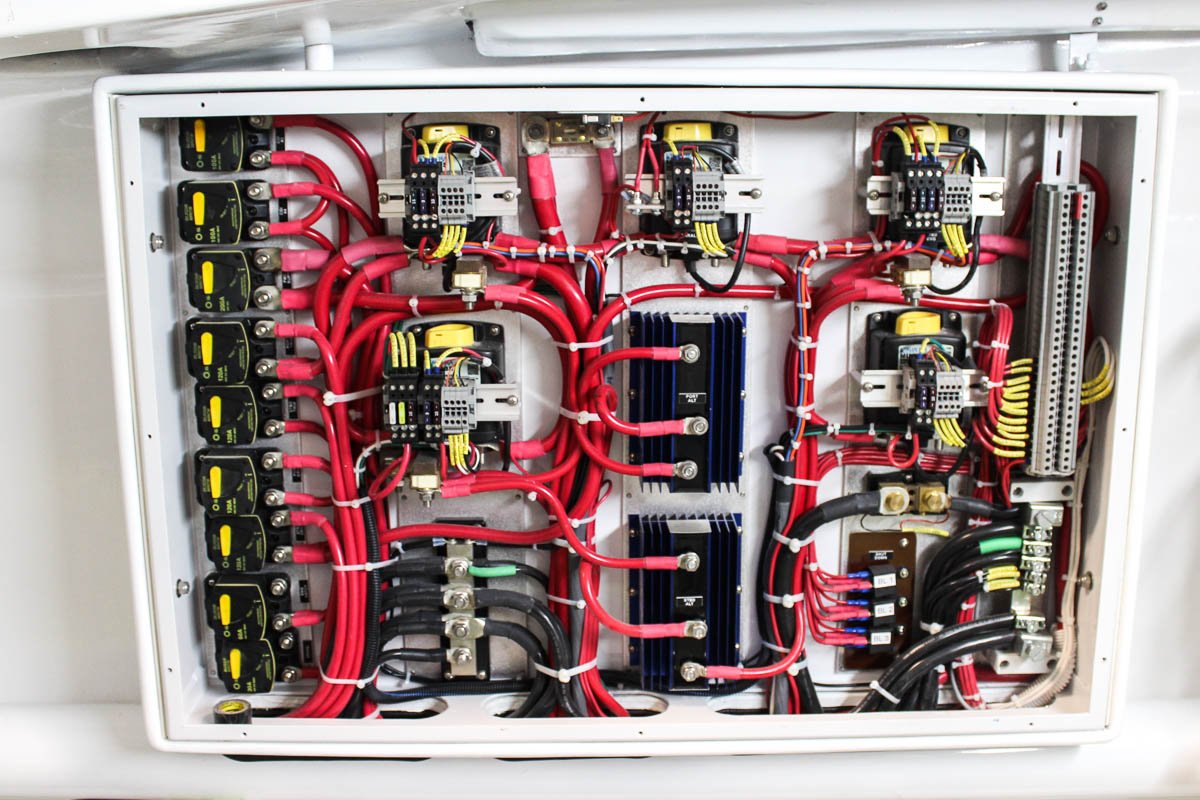 An oil ventilation system has been installed on the port side under the hatch to collect all drip off from the engines via a stainless steel mesh, and as the droplets mature in the air they are routed directly back through the system.

Next, the team conducted a series of tests and was able to devise a complex singular unit to run all the controls from one rectangular box. When completed, it will be lighted and covered with a clear door. All systems will be linked to the console using the new C Zone technology. This is quite an improvement from the customary cumbersome quest to reach hidden wires hidden behind clamps tucked deep under the hatch. The features are so extraordinary the engines can be started from the dock, and will be roaring when the operator arrive to the boat. 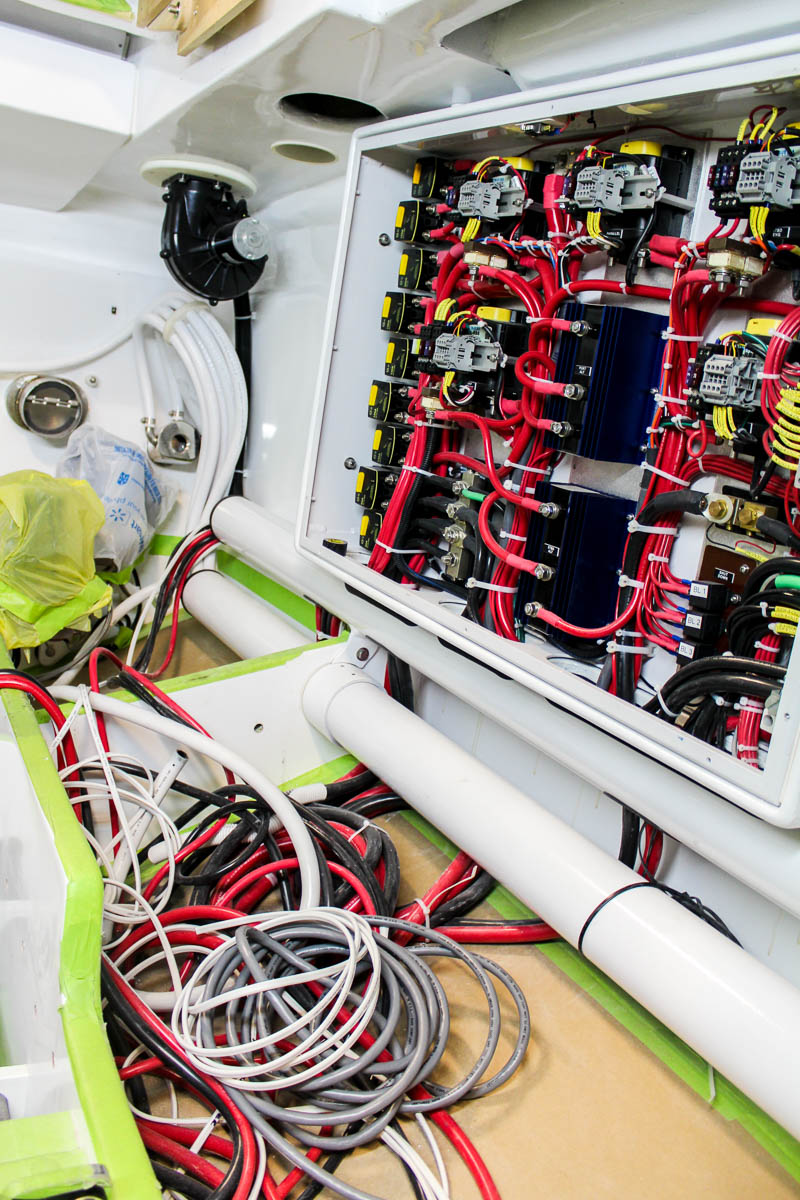 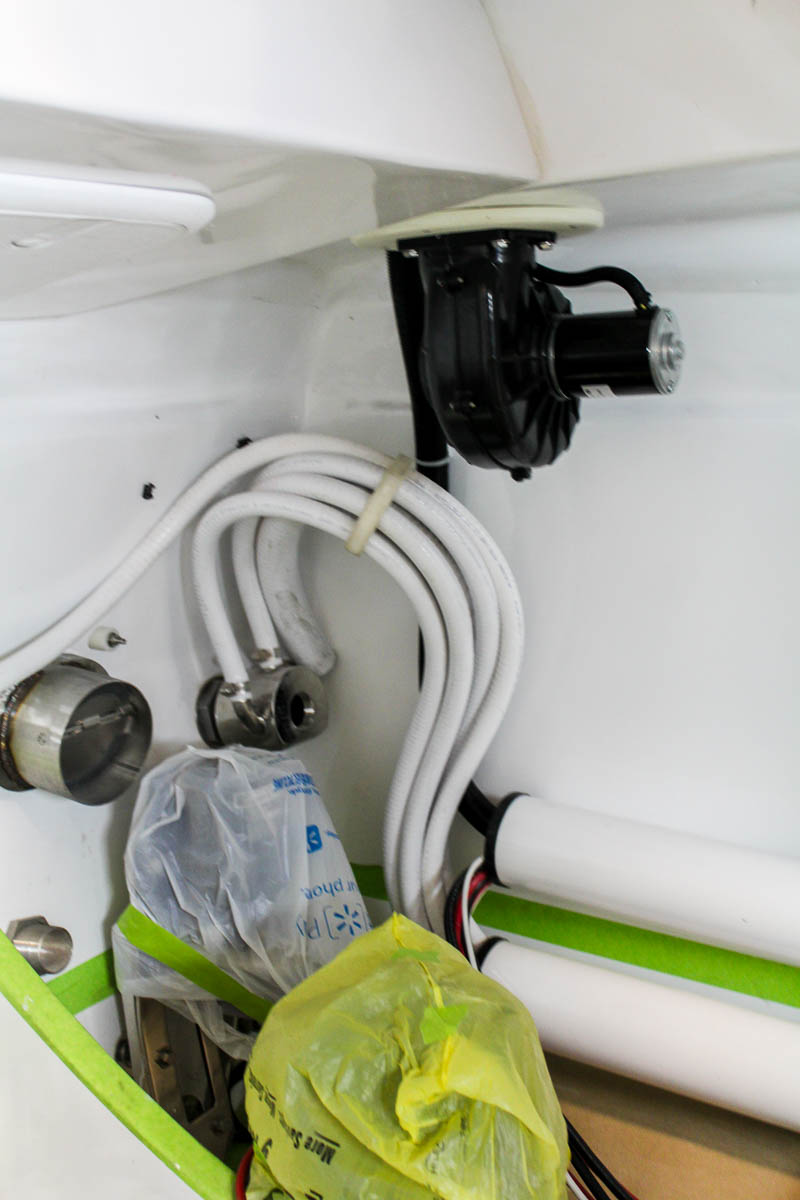 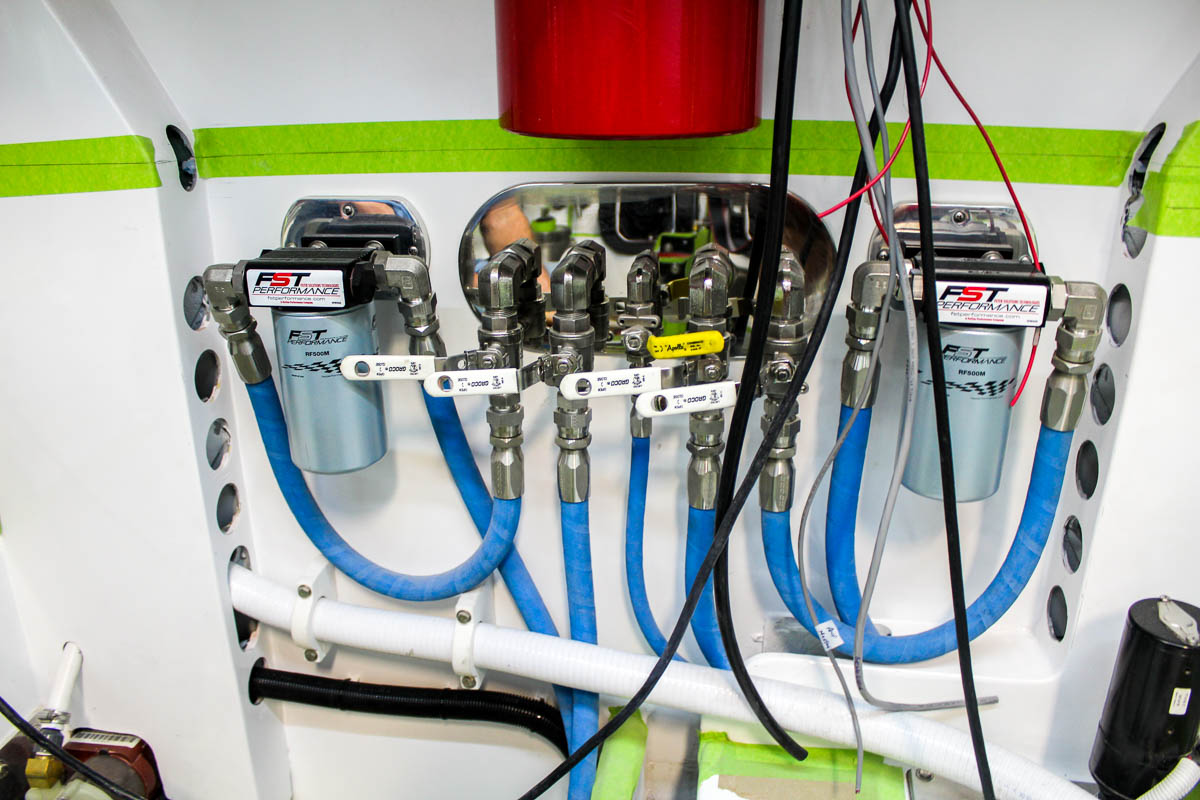 The cockpit was still a work in progress but when complete the sticks and steering wheel will both be located on the starboard side and controlled by the pilot. The cabin below will have a sleeping berth, and full galley with microwave and refrigerator, in addition to an array of unique touches.

In the private enclosed head, the center of gravity on the actual toilet bowl was shifted back to prevent the excessive weight from breaking the floor when running at high speeds. This subsequently solved another common issue and now the toilet seat sits higher up, thus making life more maneuverable in such tight quarters. 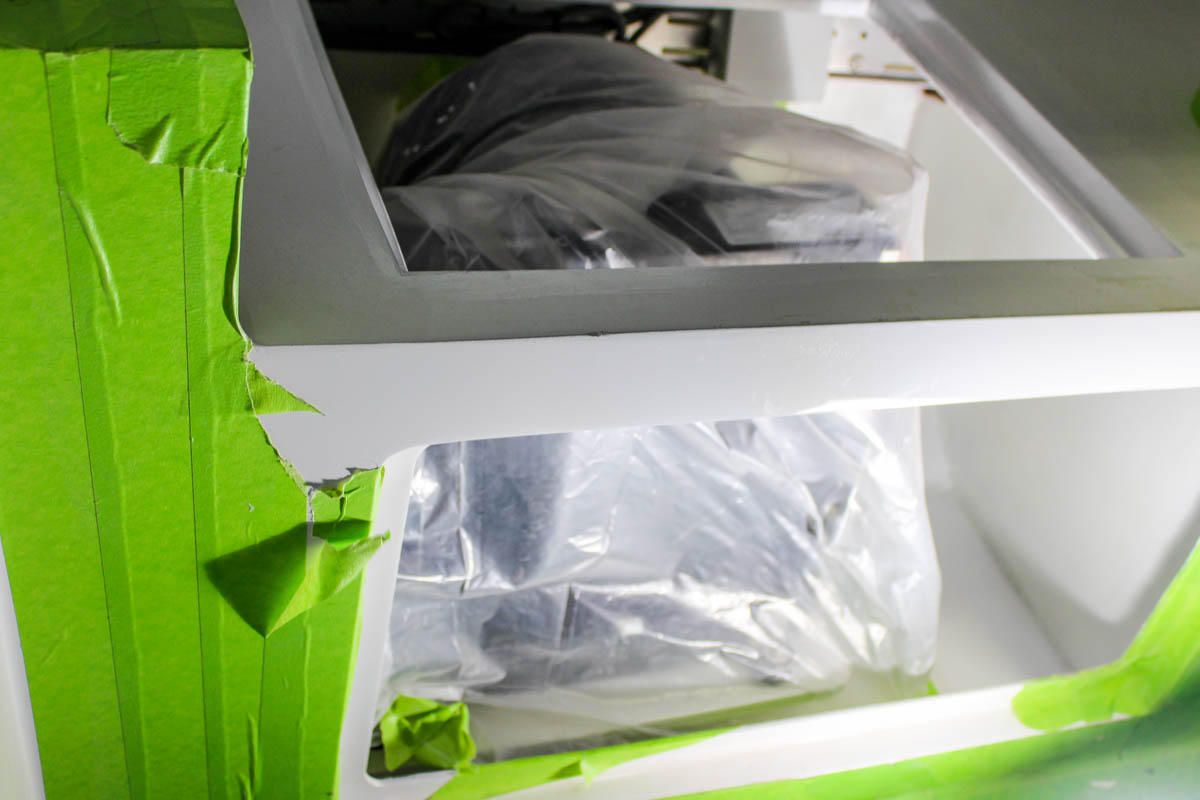 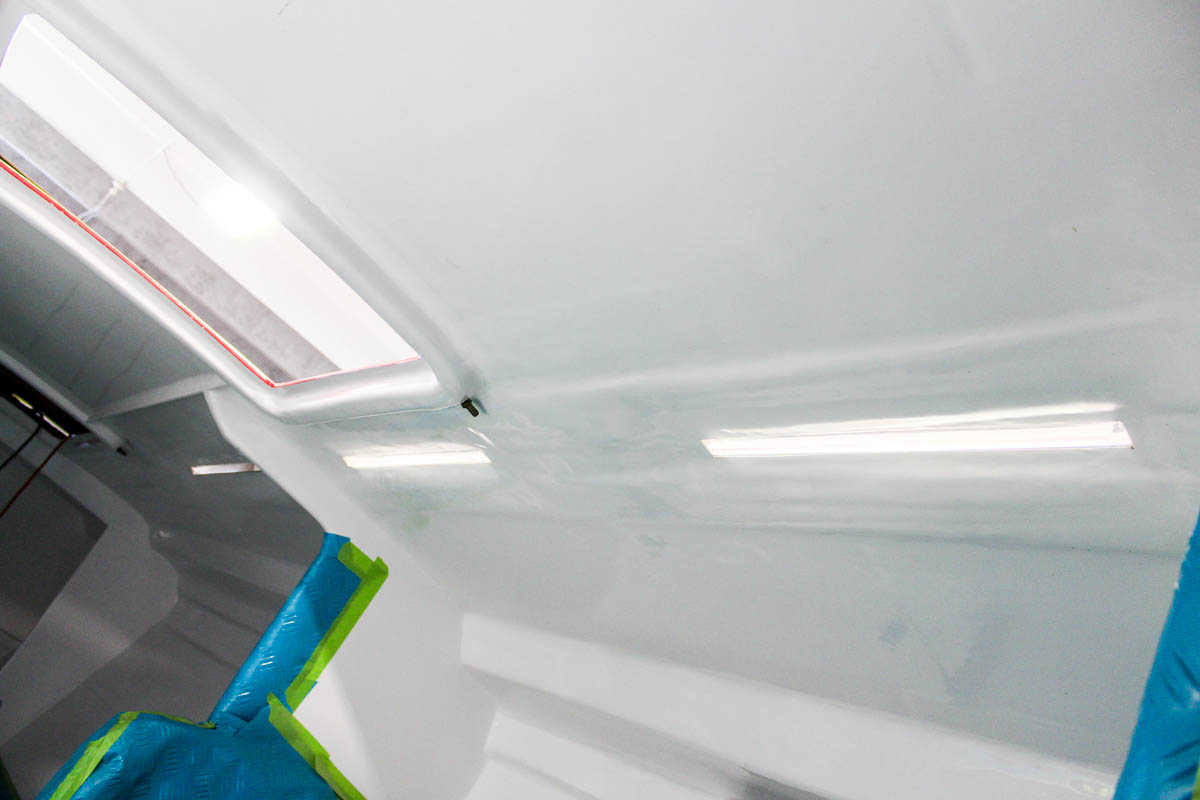 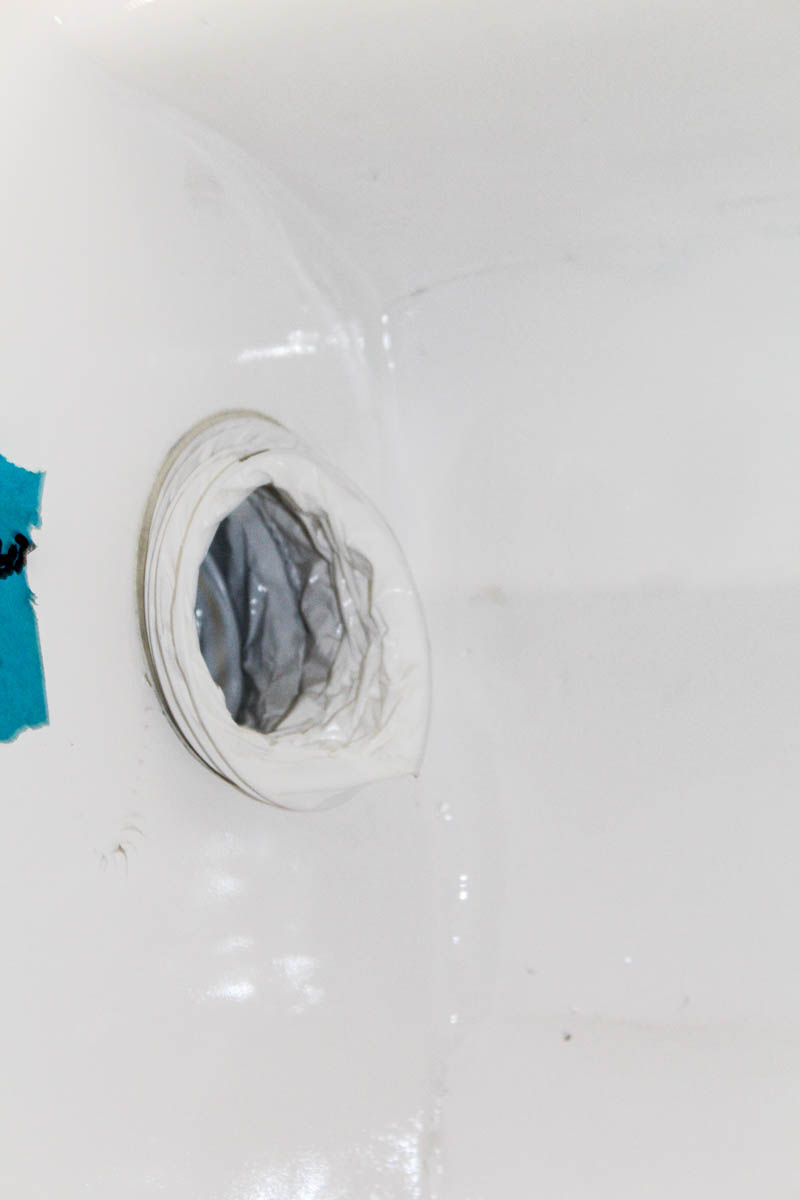 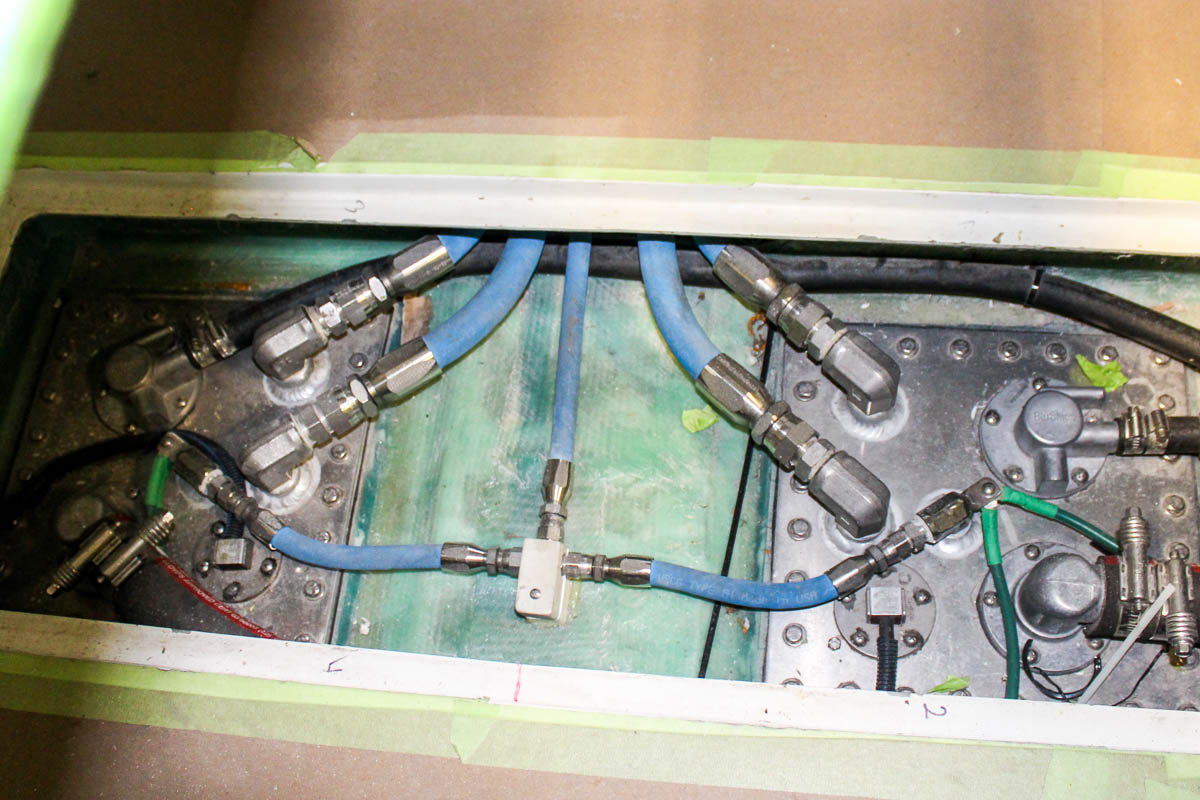 The air conditioning system is also cool as can be (no pun intended there.) The blade, made out of a hard plastic instead of metal, was mounted on special vibration isolators, before another set of isolators were added. The entire unit sits at a 7 degree angle which means water is guaranteed to never collect and always drain. An additional benefit is the lack of noise and vibration.

In close proximity to the air conditioner, a blower has been added inside on the wall and it will remove all the cabin's hot air upon arriving back to shore. Once the heat is completely filtered out from below deck, the air conditioning can then be switched on.

When gazing up above, three transparent plastic prisms decorate each side on top of the roof inside of the cabin. The six prisms have been installed at a special angle which will provide pure natural light to penetrate through into the cabin, while not allowing any warmth in.

Moving to the exterior, unfortunately it was hard to get a good peek through the swathed layers of protective plastic, but paint credits keeping the boat looking Ferrari and not NASCAR go out to Visual Imagination. Mark Morris and his Missouri-based artistic team are known around the nation for their banner boats such as Bat Man Hammertime and avid powerboater Gino Gargiulo's Mercedes and Lamborghini classics.

When the owner comes to Miami each month or so to monitor the progress, the size of the trim tabs recently became a reoccurring theme. At first sight, the boss said, "They are not big enough, double them in size." Done. Brownie and the crew at Nova Boats doubled the size.

The next month upon his return, he commented, "You guys never changed the trim tabs?", to which Brownie's reply was, "Yes we doubled them as you requested." Still not big enough, his final words once again on the second trip were, "Make them twice the size!" Each trim tab is now the size of my snowboard, simply gargantuan as you can see below. Go big or go home!

In wrapping up Brownie's Then and Now saga of speedboats, salt water has been permanently imbedded deep in his veins, and maybe even has seeped into his brain after having shaped six decades of perfecting powerboats and punishing the waters when racing them.

I would like to first of all thank Brownie for making Part One of his story the best book report I have ever had to write, and secondly, for opening the gates and giving me a glimpse into the making of the 48' Doug Wright Vee-bottom for the final part of his story. And while I know this wasn't a center console project, we as boaters salute Brownie for all the knowledge and experience he has added to the "center core" of our boating world over the years... 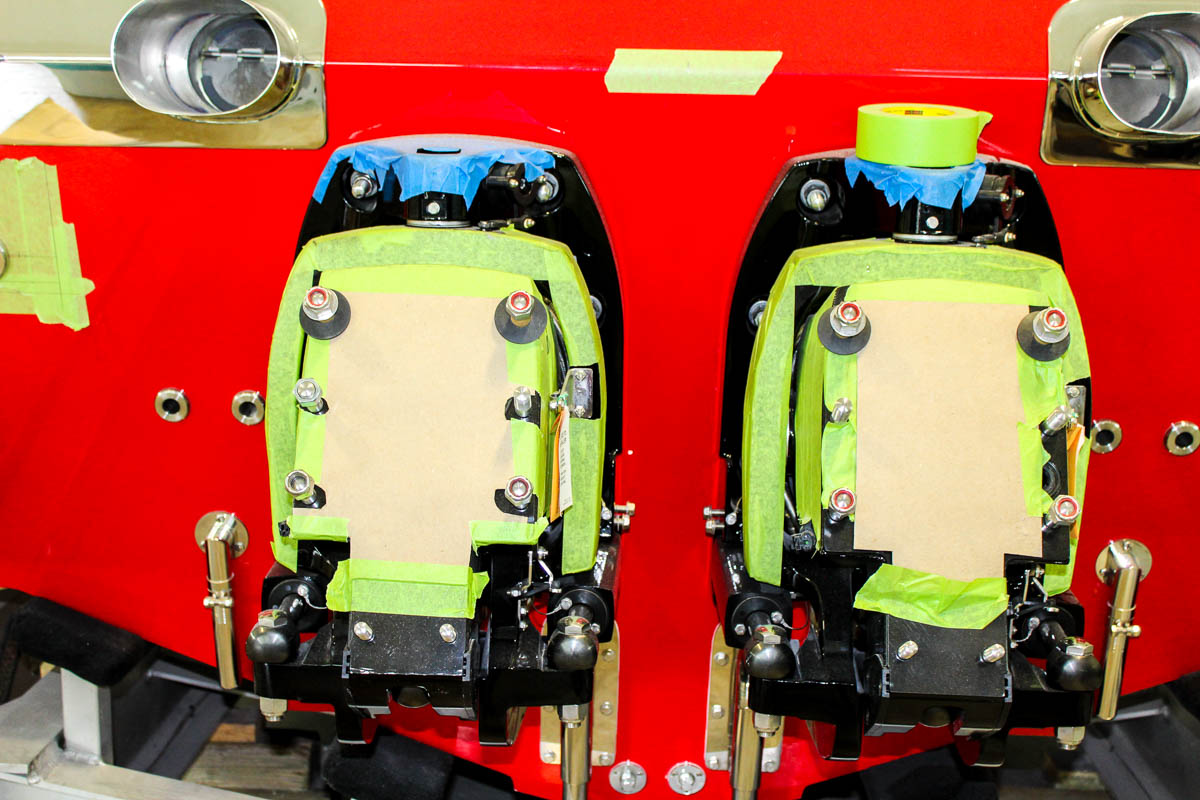 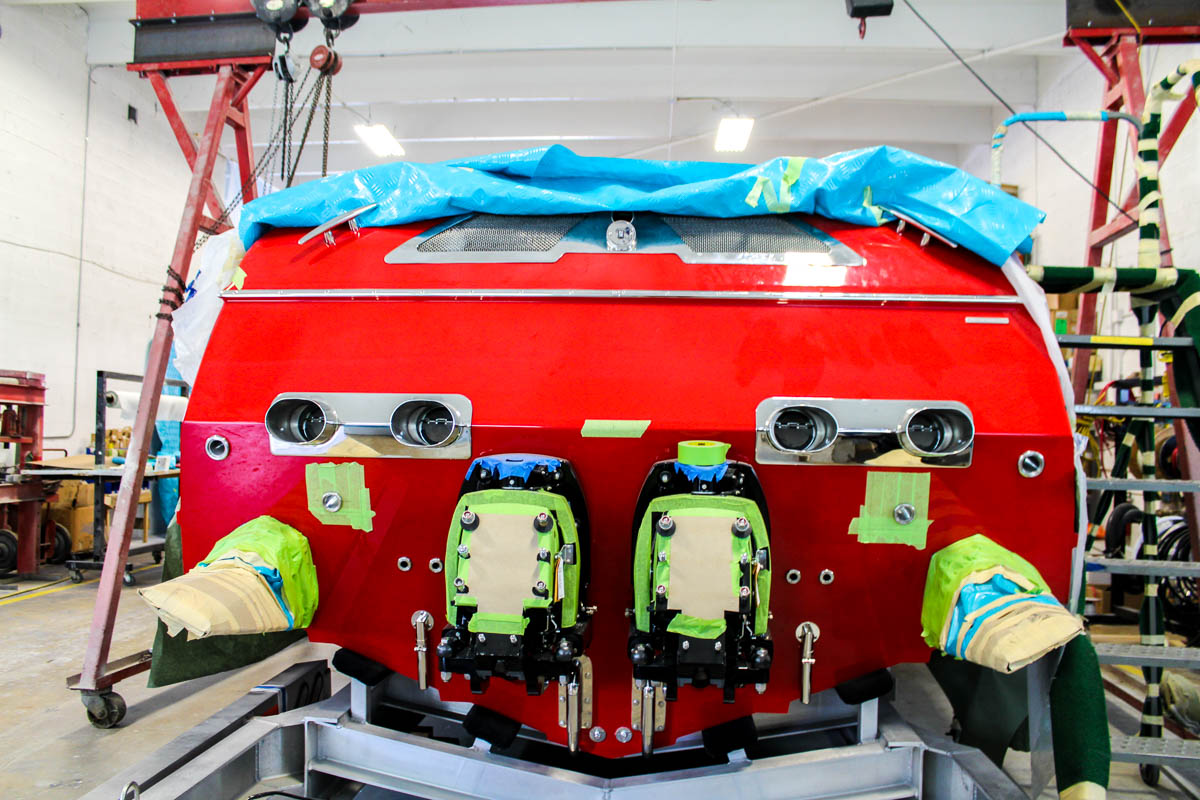 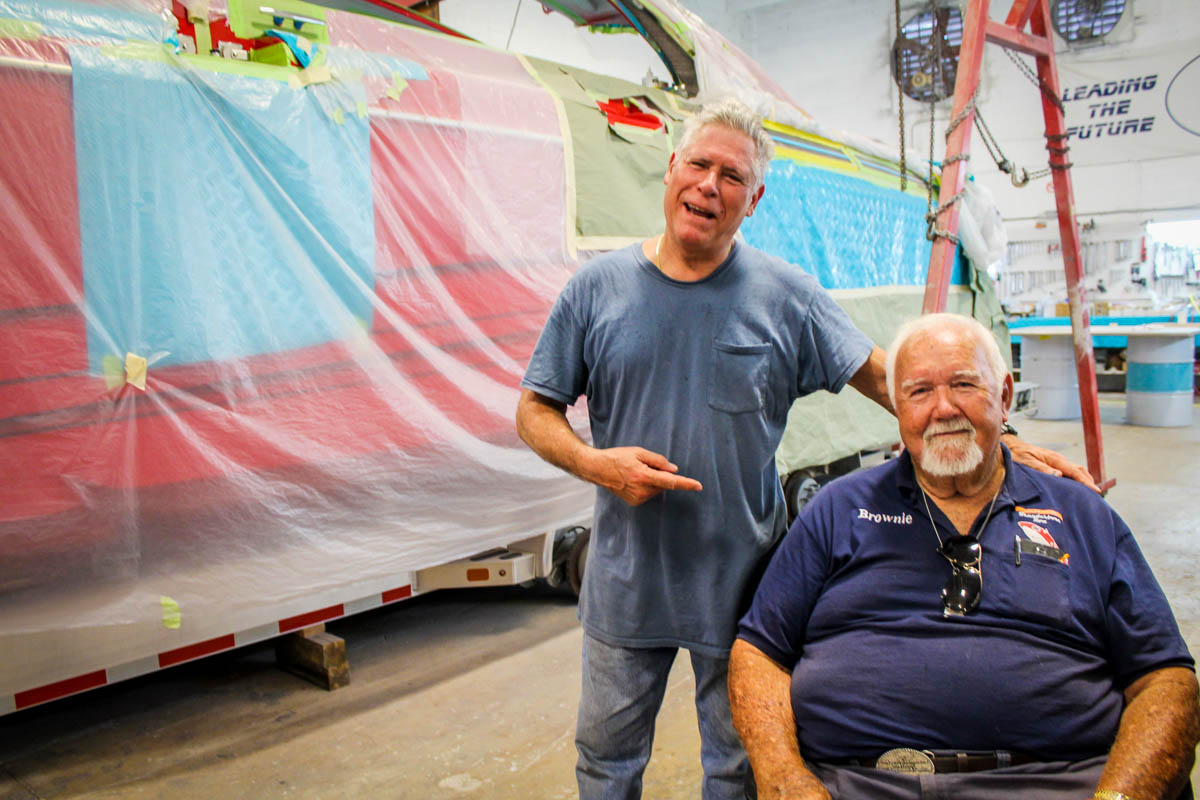